Today’s bit of fluff falling from the sky made me think back upon my Carnival cruise two years ago…and how I somehow never wrote about it. You’re in luck! I have the time to do it today!

Who knew back in October 2016, when I paid for my first cruise ever, that it would become so essential? I certainly didn’t. It’s sort of like drunk you ordering something in the middle of the night that shows up–SURPRISE!–just when sober you needs it most. I was grateful for the temporary distraction in April/May 2017. 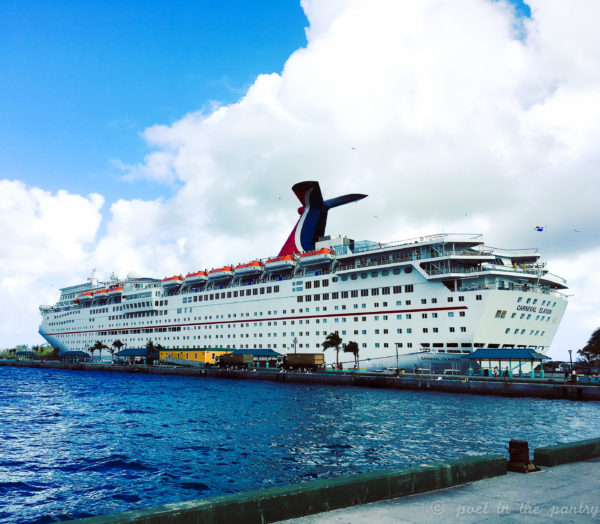 When my friend and I decided to book this cruise, we chose the Carnival Elation, departing from Jacksonville, Florida, for a few reasons. First, she lived in Jacksonville at the time, so I was the only one who had to fly to get there. Second, it was much more inexpensive than a lot of the other options.  For our 4-day cruise to the Bahamas (Freeport and Nassau ports of call), it was $522.46 per person for a double occupancy, oceanview room (room U67, in case you’re curious). That included all taxes, fees, and prepaid gratuities–but no alcohol. We opted to pay for that as we drank it, since I knew I would not be able to drink much on this trip anyway.

Elation is a small ship, holding only about 2000 people. It’s not a floating mall and amusement park. The ship is also one of the oldest in the fleet. It was scheduled for dry dock in August that year for a total refurb. Meaning, we expected an economy hotel experience for our cruise–but we were okay with that, considering the price point. The room was definitely dated. The TV, ancient. (Not that we watched it…) But look at that big window! I was afraid it would feel claustrophobic (have you ever studied room layouts on a cruise ship?), but it was quite the opposite. Our room was pretty spacious, all things considered, and the bathroom was as big as any average hotel room. The bed was comfortable. I really couldn’t have asked for more. 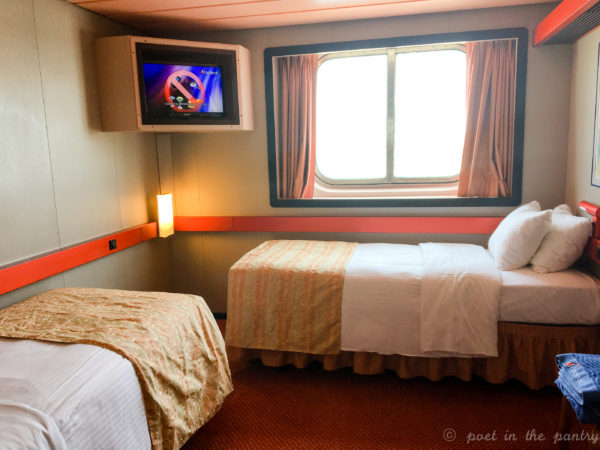 The food is where a cruise shines.

Sure, there’s the buffet. You can go to it pretty much whenever and find something to eat. Some of it’s great. Some of it isn’t. One day, we decided to have dessert for lunch. Why not? But the actual restaurant was a dream. 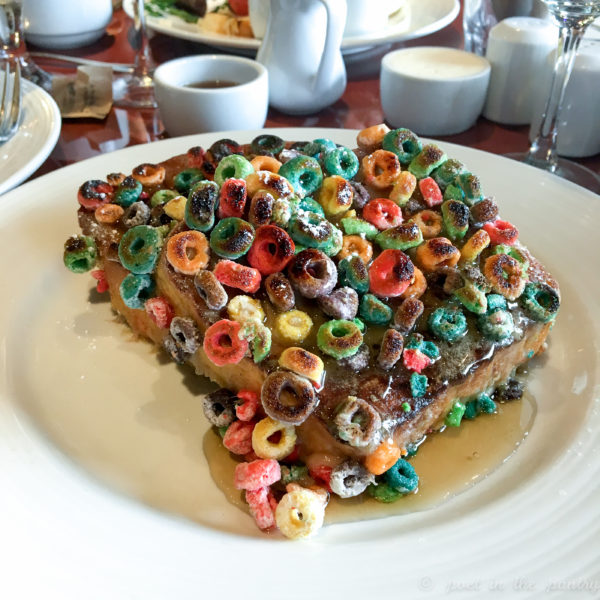 There was only one restaurant on this ship, outside of the buffet–the dining room. It was elegant, massive, and, other than dinner time, you could sit pretty much wherever they had room for you (which totally calmed one of my fears about being stuck with strangers). See that Froot Loops encrusted French Toast? Amazing! Another morning, I opted for mac & cheese for breakfast. Why not? And it was absolutely glorious, served with bacon and a little cheese crisp garnish. HEAVEN. 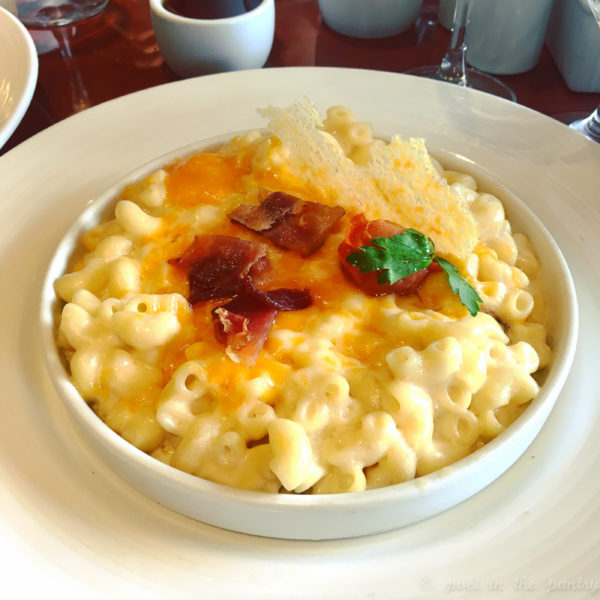 Dinner in the dining room was more the standard experience you see in movies (hello, Like Father, which might as well have been a long-form advertisement for cruising). We traveled as part of a group of my friend’s in-laws (and their friends), so we filled our own table for dinner service. No need to interact with strangers if we didn’t want to. (Score!) But–introverts, fear not!–it looked like they could accommodate groups of all sizes. 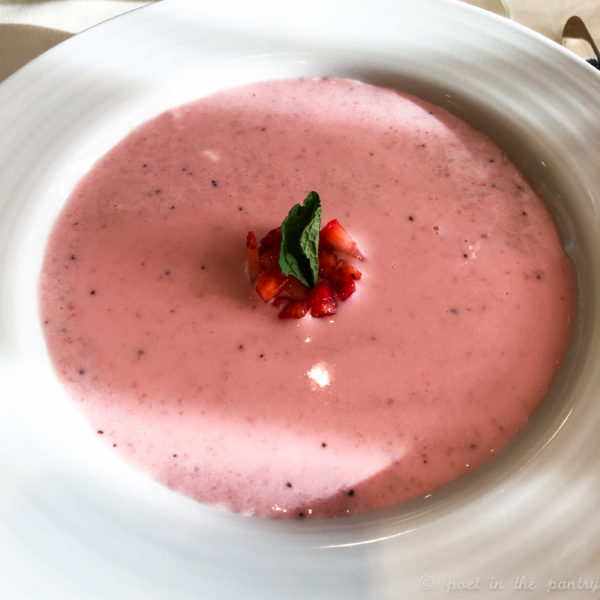 We opted for a 6PM seating (“early”). It was nice to get our feed bags on and get out so we would have time for the evening on-ship activities. Every evening, we had our assigned wait staff who not only took excellent care of us, but also entertained us. There were songs and dance numbers and everyone was just so friendly and wonderful. 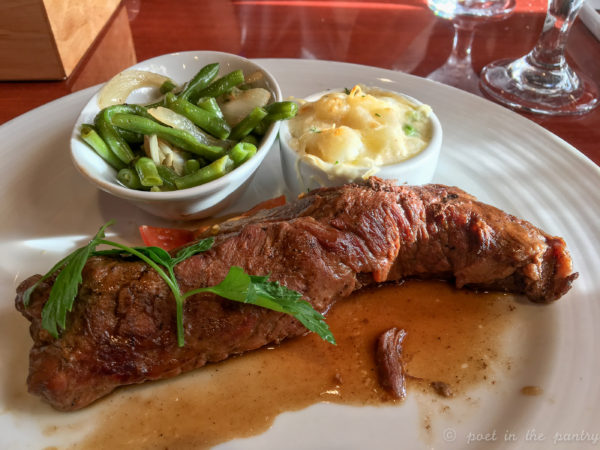 Formal night was a little more special. We all dressed up in what formal felt like to us. For me, that meant what probably was intended to be a mother of the bride dress I found on clearance for $32 at Target. Who says fancy has to be expensive? The menu was even more phenomenal. The desserts were over the top. I wanted to eat it all. 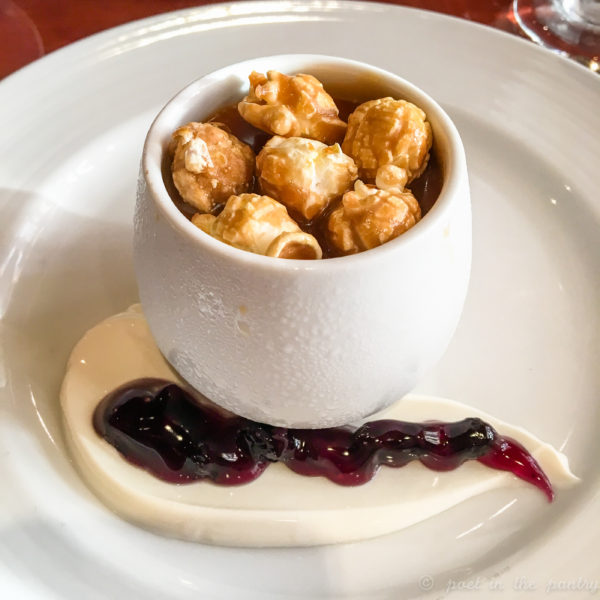 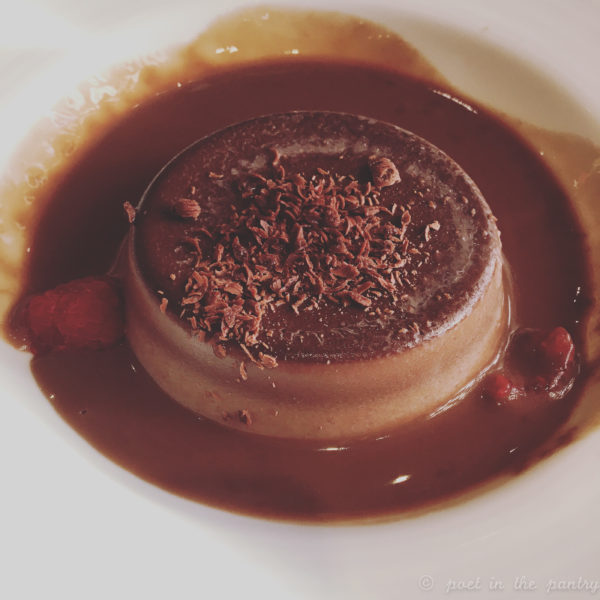 And let’s not forget the drinks…

Many opt for all-inclusive packages for alcohol. At the time, I was on medication that did not mix well, and so I had to be careful about how much I drank. Paying by the drink kept me from going overboard. (Ha!) Figure $11-$12 for cocktails, including tip, which you’d pay in many restaurants back home anyway. There usually was a drink of the day that carried a special discounted price, too. All of them were delicious. 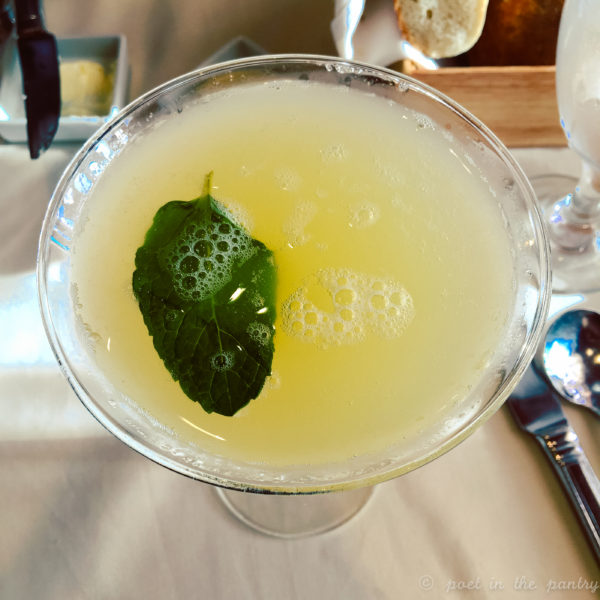 Nights were full of shows.

Every day, we’d get a list of ship activities slipped under the door. I really enjoyed the musical entertainment. I know, you’re thinking…cruise ship? Really? But the shows were theatrical and engaging, and everyone in them was overflowing with talent. The “Epic Rock” show had especially great costuming and lighting. It was all in great fun. 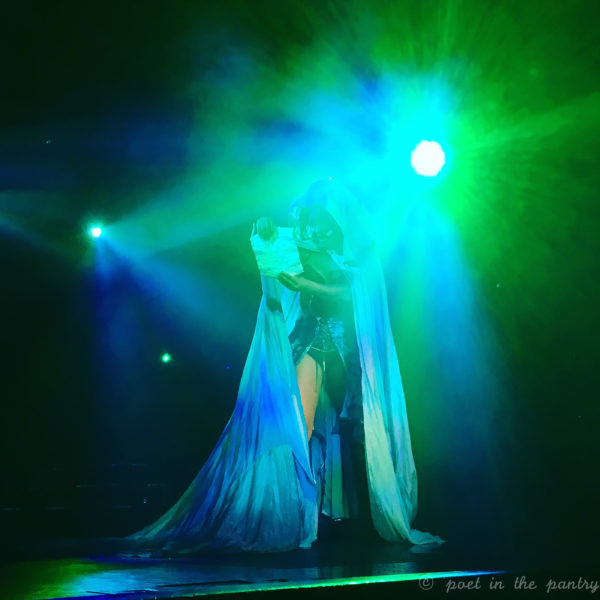 After, there was karaoke, dancing, gambling, shopping, and even a comedy club. For a small ship, they packed in a lot. 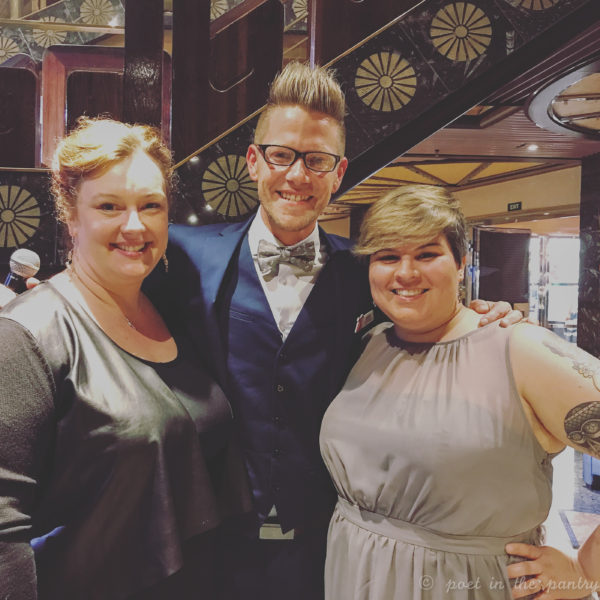 my friend, Cruise Director Kevin, and me on formal night

We had a couple days on ship to fill, outside of the ports of call. Outside of eating and playing Harry Potter trivia, my favorite place was the 21+ Serenity Deck. It was a little bit quieter there, and just the perfect place to read a book with a ridiculously large sunhat and slip away from the world for a while. 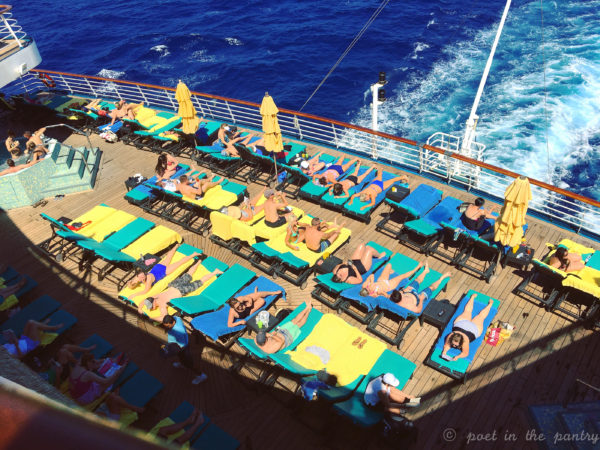 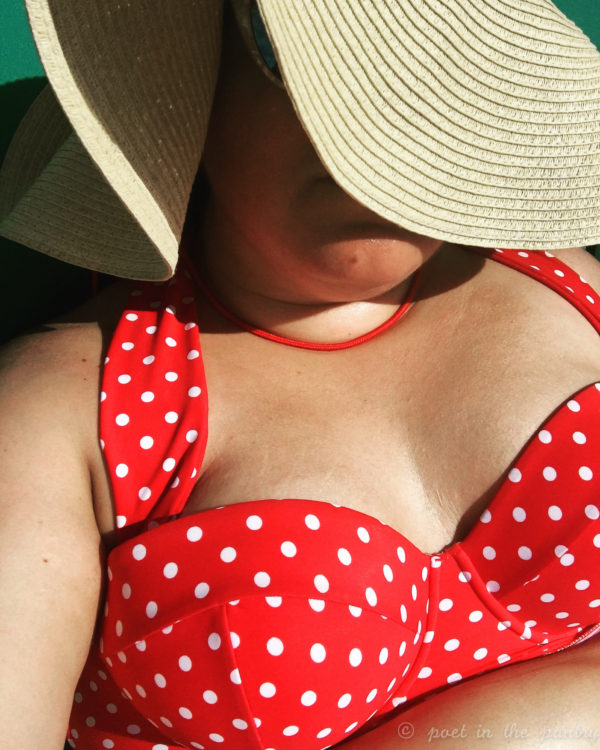 There were two pools, but they were always pretty full. And loud. I never felt older than when we tried to find the perfect time to take a dip. We did eventually step into the smaller pool at the back of the ship, during a gap in activity, but it was short-lived, due to a sudden helicopter evacuation that required the clearing of the deck. 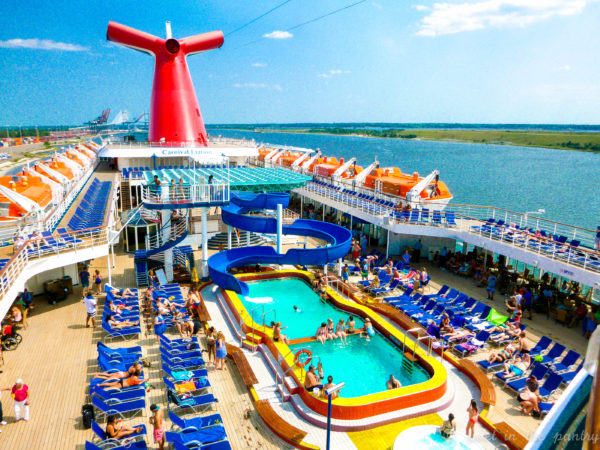 Excursions are where it’s at when you arrive at the ports-of-call.

But they also rapidly become very pricey. We limited ourselves to just one Carnival-booked activity, maximizing relaxation. At Freeport, we were whisked away from the dock to the private beach on a double-decker bus, and given a bit of a tour on the way. The landscape was scarred by hurricane damage. I felt guilty being there solely for pleasure while the island inhabitants clearly struggled. 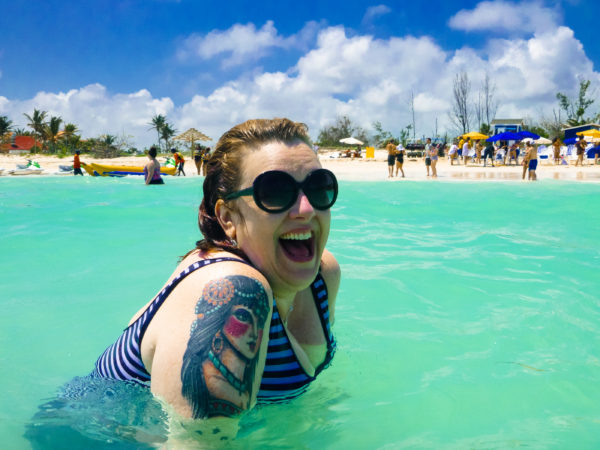 Our Freeport Beach Getaway excursion cost us $40 per person and spanned 1:30 pm to 6:00 pm. The water was turquoise, the umbrellas were available upon request, and the drinks and food (for an extra cost) were brought right to your seat. 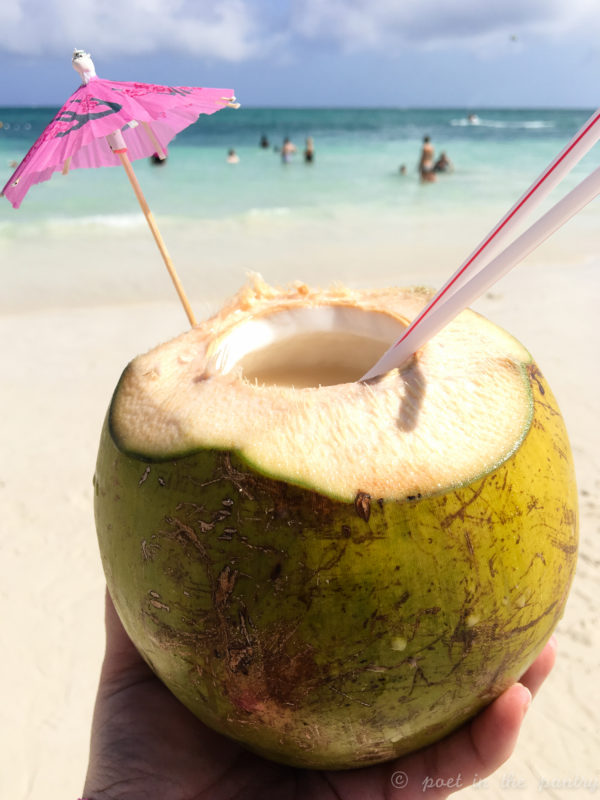 I grew rather attached to the ‘grammability of piña coladas served in coconuts and had a couple. The second time, I was assured they climbed a coconut tree to get that coconut just for me. Doubtful, but it’s a great way to get an increase in your tip. 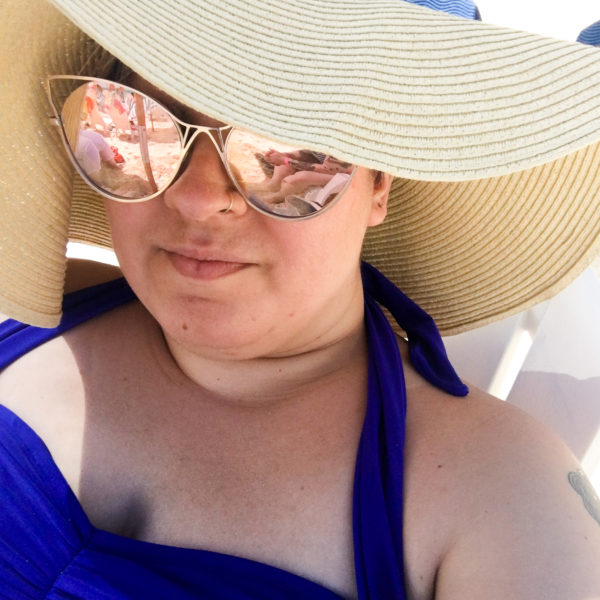 When we arrived at Nassau, we opted to go off the grid and booked our own excursion–a food tour through Tru Bahamian Food Tours for $77, including taxes and fees. 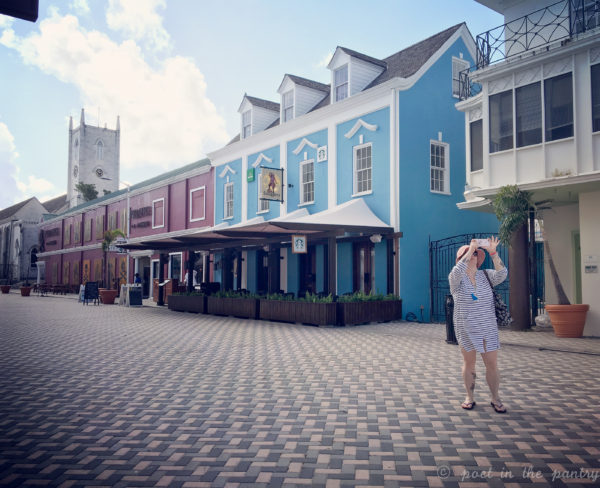 It was a bit of an adventure. We were given a meeting point, but no information on which establishments we’d be visiting. The meeting points change regularly. We easily walked from the dock to our eating experience. And stopped for photos along the way. 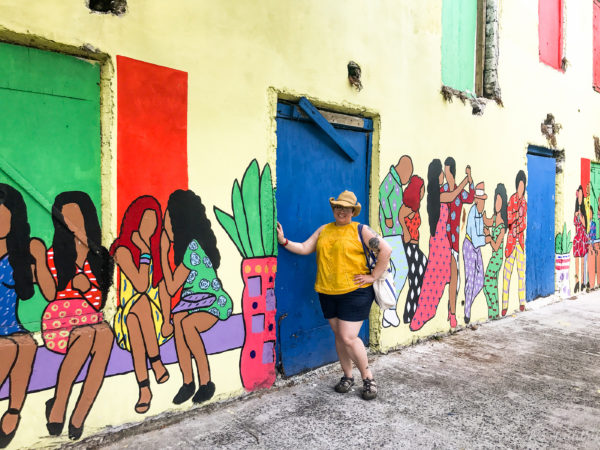 Highlights included Talking Stick at Towne Hotel Restaurant & Bar, where I met Max the Macaw. He was heavier than he looks. I imagine that comes from all the cherries tourists give him from their Planter’s Punch. 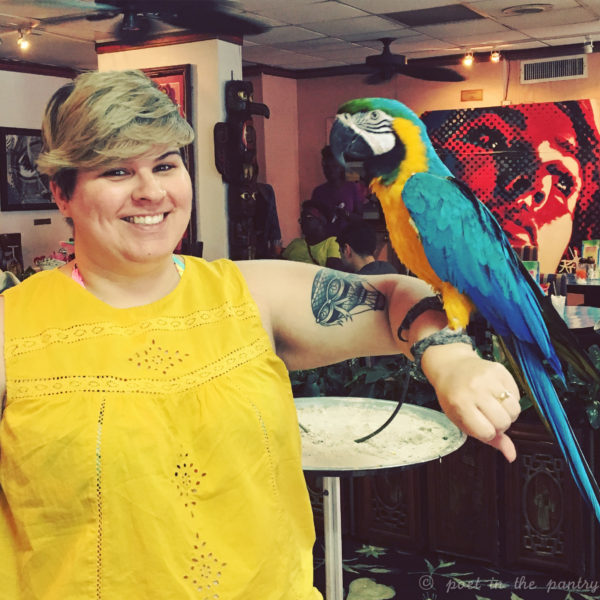 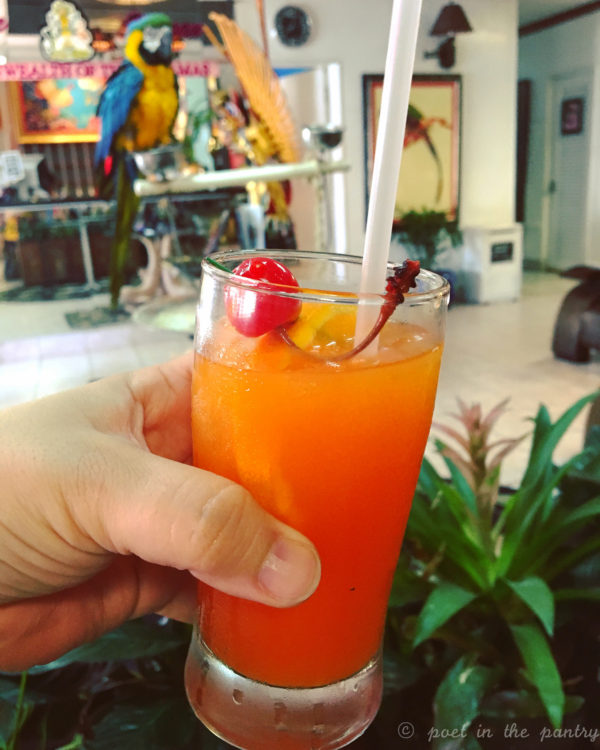 We stopped by Graycliff Hotel. The property consists of a hotel frequented by celebrities, restaurants, an absolutely gorgeous pool (which, for $75/person, you can book an Escape Nassau experience, where you tour the hotel, lounge by the pool for the day, and are fed a 3-course lunch), and an on-site cigar company. 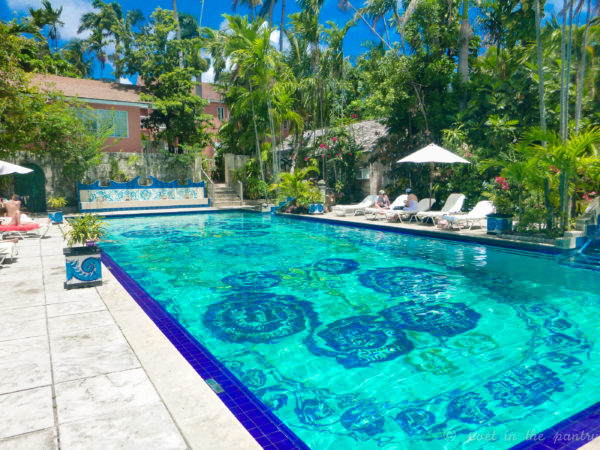 Our interest, in particular, was in Graycliff Chocolatier, a high-end candy company. We only had enough time to sample these hand-made gourmet chocolates, so clearly made with attention to detail and great care. 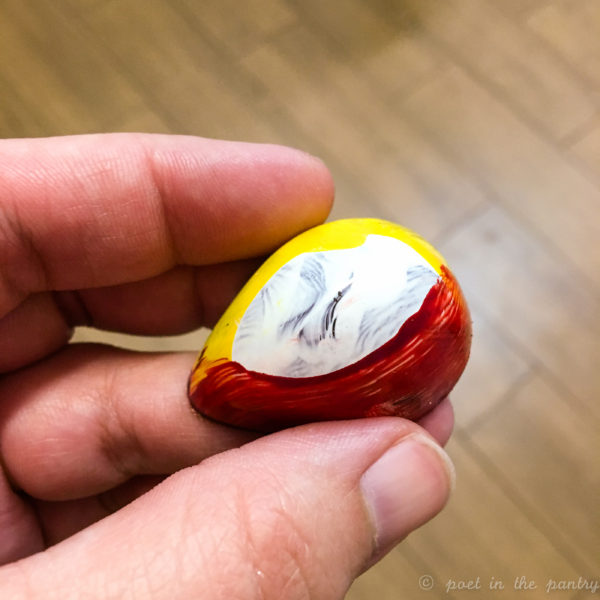 The tour took us throughout Nassau, where we also viewed important historic buildings and sites. In all, we made six stops for eats, and all but the penultimate one impressed me. (That being a Greek restaurant that, aside from a bevy of penile pottery on display in the bar, wasn’t much different than going to one of the many Greek pizza places back home.) 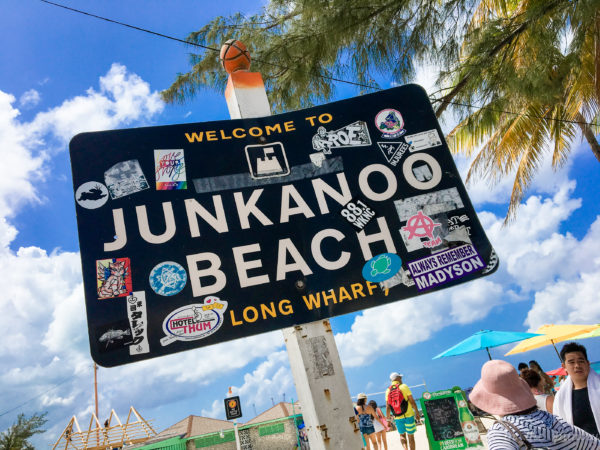 We had time to kill after, and since I was doing a StepBet and needed wi-fi to sync up (don’t even ask…I was an obnoxious brat), we walked over to Junkanoo Beach, a public beach. On the way, my ankle gave out, as it does, I tripped and fell on the sidewalk in front of a bar, and proceeded to spew blood. Two very nice gentlemen offered to help me get up, but I was mortified. I’m a hazard to myself, even when completely sober. I’m sure they thought I was drunk.

I insisted on pushing along to the beach anyway, despite my gusher. And, upon arrival, thought better of entering the ocean with an open wound. At least we had a glimpse of the free beach. 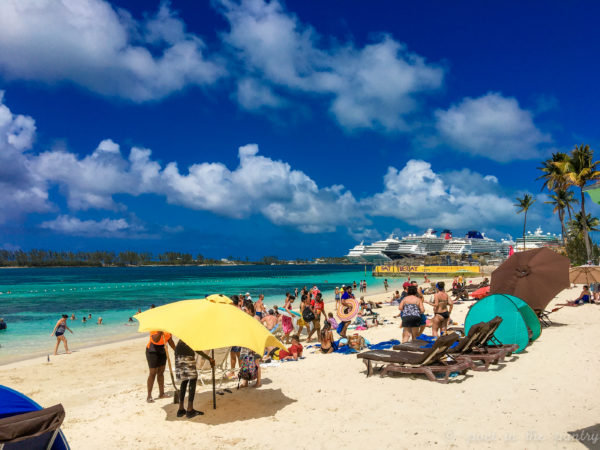 Overall, it was a great budget vacation.

We had rough seas at times, but I managed to be mostly unaffected (I brought my motion sickness bands, just in case). I was worried that being trapped on a boat with 2000 people would be a bit much, but it really wasn’t that bad. Aside from the pool, there was always plenty of room and places to get away from everyone else. Go walk the track. Play mini golf. Learn the Thriller dance. I can’t say I was ever bored. 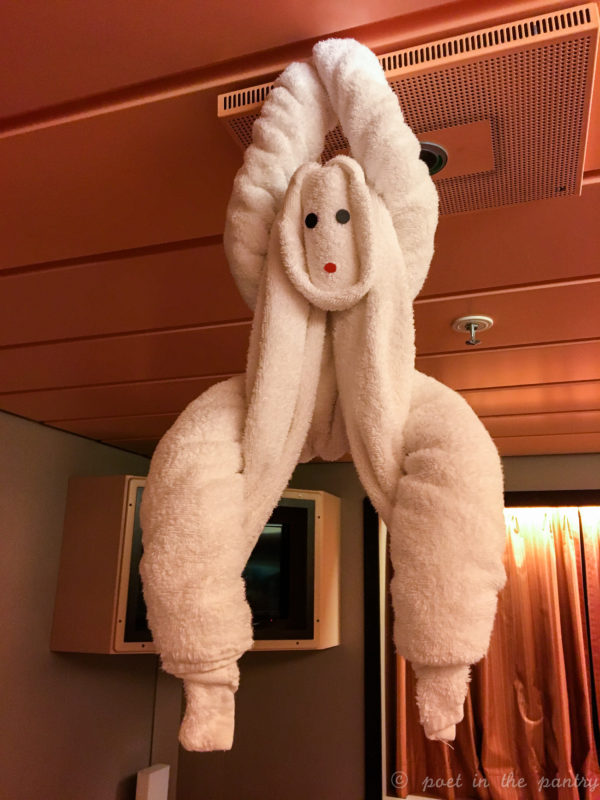 The caveat: since dry docking, Elation is a different ship now. They’ve added a Guy’s Burger Joint. There are also balcony rooms now (that are soooo cheap compared to other ships!). The BlueIguana Cantina is also a new offering. I think these additions would only enhance the experience. And Carnival is always offering upgrade deals on rooms to sweeten the pot. A vacation on the Elation is a steal! My friend no longer lives in Jacksonville, but I would sail from there again, just for the value of the dollars spent. 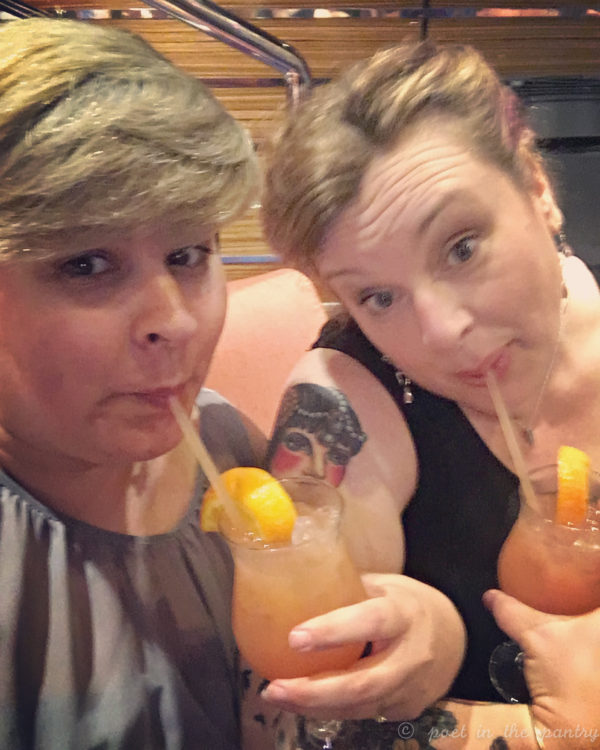 Have you cruised before? What were your experiences? Recommend? Or not?