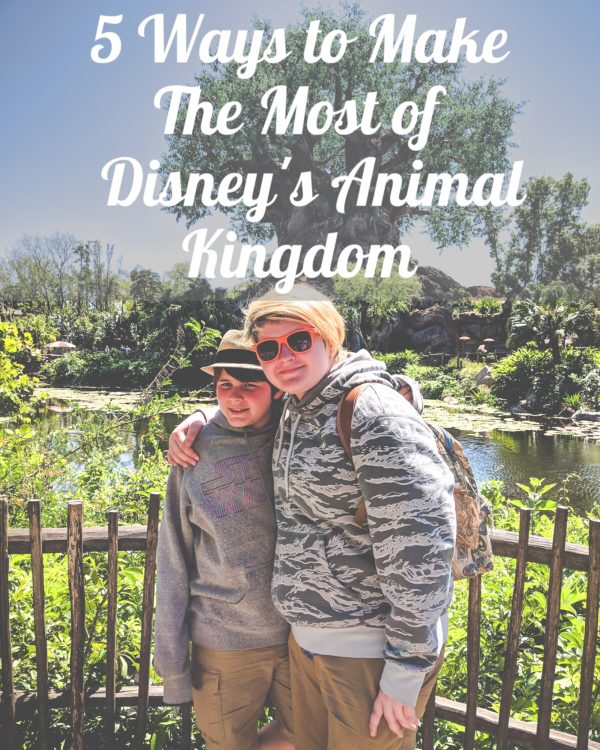 I love it for being everything Magic Kingdom is not. The pace is a little slower, but there is so much to see and do, and the food is phenomenal. 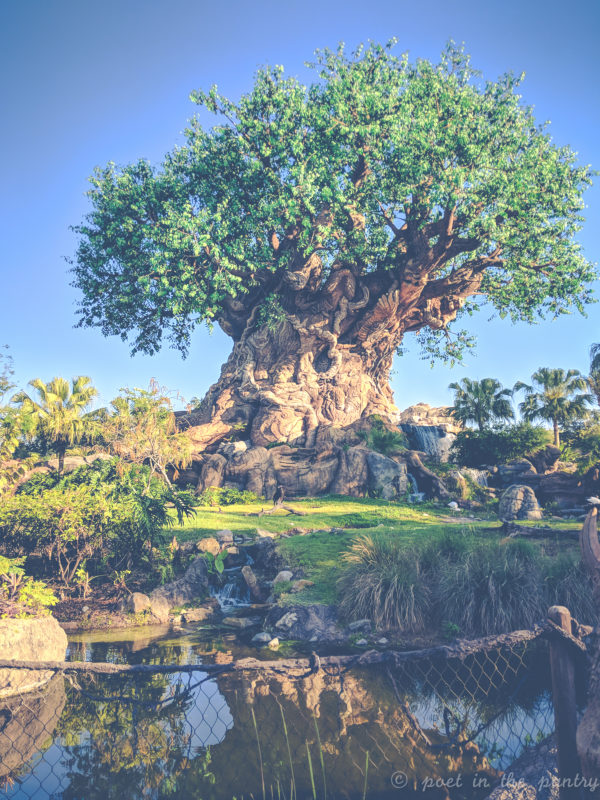 Animal Kingdom celebrates its 20th anniversary on Earth Day this year! When we visited in 2015, this Disney park limited operations to daylight hours only. As such, many bloggers used to recommend it as a half-day attraction: something to split with, say, Epcot, offering a perfect opportunity to utilize the Park Hopper pass. My family and I, however, couldn’t manage to pack everything we wanted to see and do into the limited hours Animal Kingdom was open. Imagine how thrilled I was when Pandora opened last year, increasing the hours of operation and adding nighttime light experiences to this already unique park! 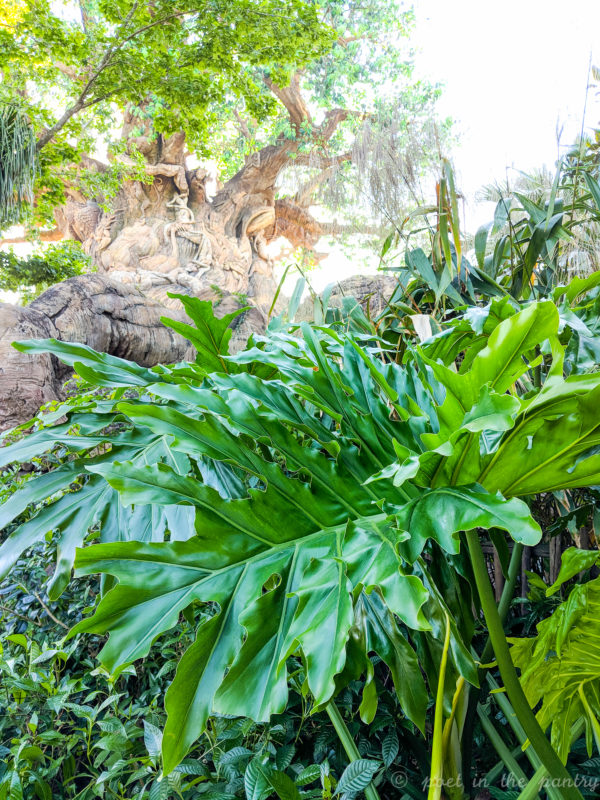 This is a trick I learned online and it’s true! Animal Kingdom rope drop comes sometime between 45 and 30 minutes before the park is advertised to open. This is HUGE! Once upon a time, you had to make a character breakfast reservation at Tusker House Restaurant to gain early entry to the park. Now, patrons are welcome to walk around and explore–taking their time before the crowds press down upon them, a multitude of discoveries just waiting for you, unhindered. The vendors aren’t necessarily open yet, nor are all the rides, but many have used this as an opportunity to get on the Pandora rides immediately without having to use FastPass+ reservations for them. There is a problem with this plan, however. 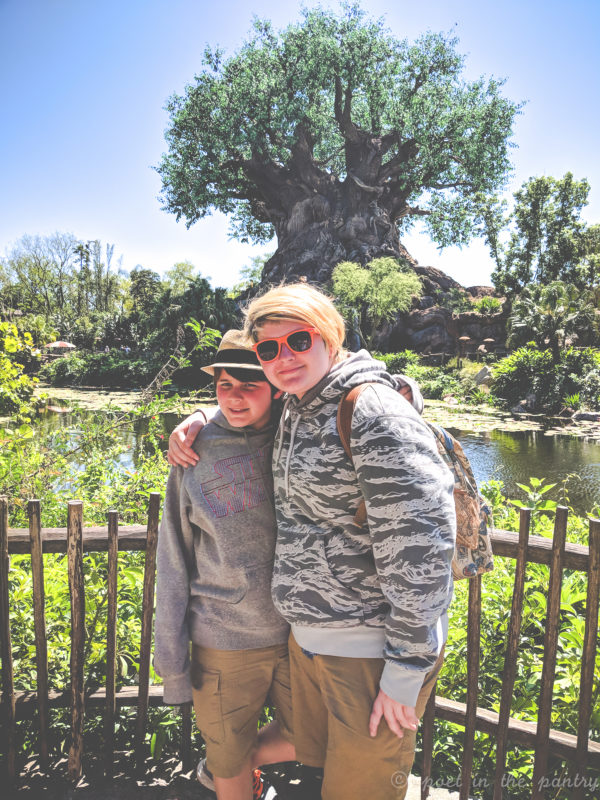 If you’re staying at an on-site Disney Resort and relying upon their transportation system, park buses don’t start their loops until 30 minutes before the advertised opening time. This means they are dispatched at the same time as, or possibly 15 minutes later than, the early entry. We attempted this approach, not realizing our error, and ended up at the gates at 8AM–regular opening time.

In the future, I would use Uber or Lyft to get to the gate early. I considered it as we waited at the bus stop, but it was already 7:20 AM and we realized there was no chance of getting there in the next 10 minutes. Why throw money at a lost cause? If the park opens at 8 AM, you better be on the app at 7 AM setting up your ride. 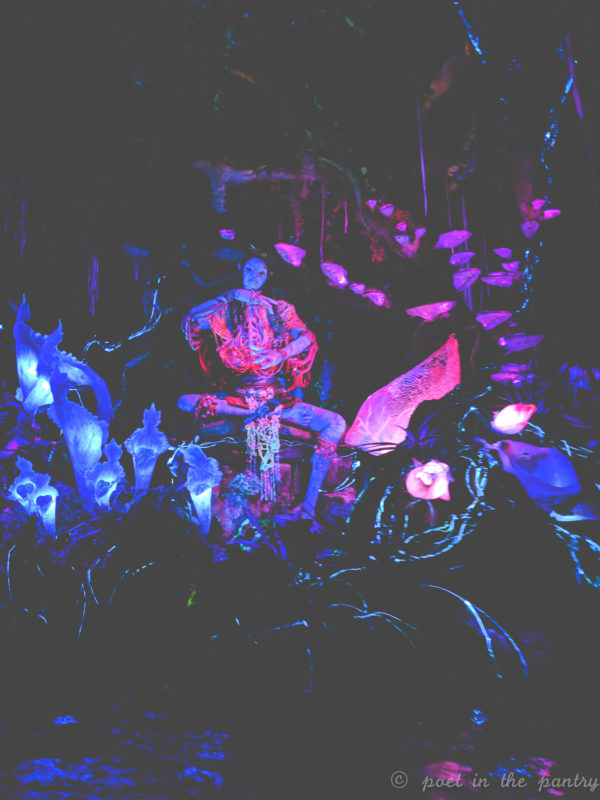 2. Everyone Is Going to Pandora – The World of Avatar First — So Go Counter-Clockwise!

At posted opening time for Animal Kingdom, waits for the Pandora rides already exceeded one hour. (Don’t know how I worked this magic to figure that out at the gate? Download the My Disney Experience app and you, too, can perform this magic!) Our chance had passed. We had to rethink our plan. 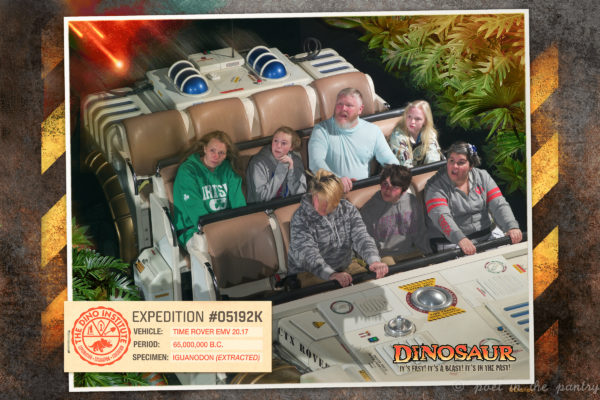 It turns out that if you go to the exact opposite place everyone is scrambling for, the park is all yours. We changed tack and hoofed it to DinoLand U.S.A., where we basically walked on to DINOSAUR. The only wait for this ride was for the video presentation that happens before you’re loaded onto a rover. As you can see in the photo above, only 4 other people preceded us in line. By contrast, when we returned in the afternoon, there was a 45-minute wait and every rover was full (see below). (I apparently had the exact same reaction both times…ha!) 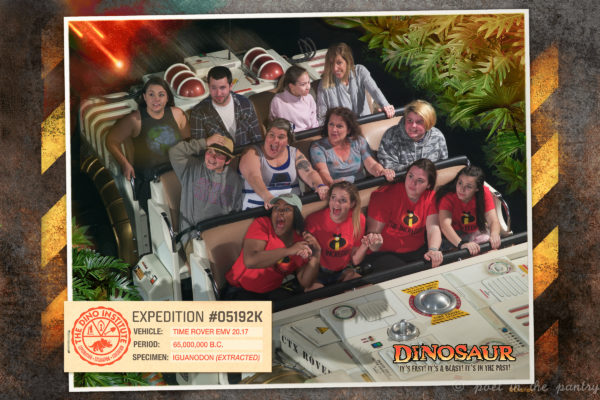 Expedition Everest posted a wait of 10 minutes, but I don’t think it even took 5 minutes, and most of that was just winding our way through the line maze. The rest of our group was due to arrive shortly, so we only rode it once, but we easily could have fit in a second ride. The wait was still very short when we disembarked at 8:45 AM. (But maybe I had enough crying for one day. 😉 ) 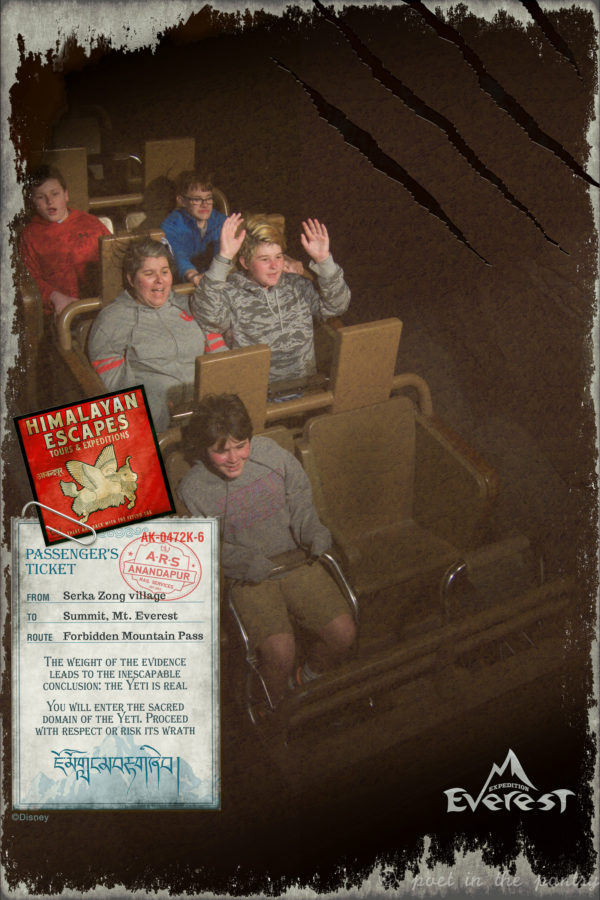 What does this mean? Save your FastPass+ reservations for Na’vi River River Journey and Avatar Flight of Passage. As relatively new additions to Animal Kingdom, both of them have wait times that regularly exceed 2 hours (Avatar Flight of Passage exceeded 3 hours on the day we visited). Your best bet is to prioritize them in the 3 FastPass+ reservations you get and take them at your leisure in the afternoon–or, better yet, in the evening when all the bio-luminescent scenery is in its glory. You’ll walk on past that LOOOOOOONG line and have a 10-minute wait, at the most. And you’ll still have experienced all your other favorite rides without having to plan out the day around your FastPass+ reservations for them. Your life is now simplified! 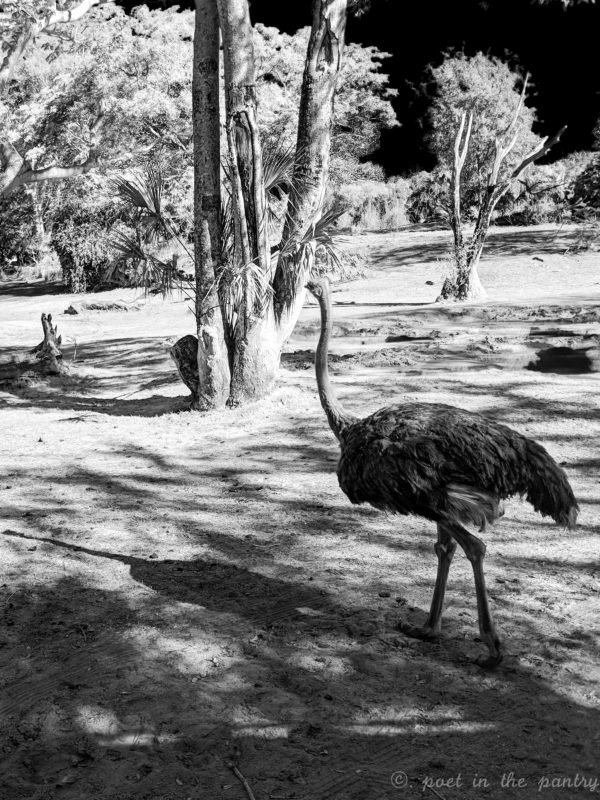 Killimanjaro Safaris is AMAZING. It’s an artificial environment, but thoughtfully created and pays homage well to the origins of the 34 animals that call the reserve home. The drivers are informative and entertaining, making the 18-minute ride seem way too short. I would have been happy to spend twice as much time on this journey! You will be tempted to whip out your point-and-shoot camera or open the camera app on your phone, throwing your limbs about in a frenzied attempt to capture the moment before it’s over. Don’t bother. It’s incredibly difficult to take photos in a moving vehicle on a rutted road, even when you have professional grade equipment. You might get lucky with your DSLR, with a good zoom lens and some patience. But there’s no time for patience, as the vehicle moves pretty much constantly. You’re likely not to get that prize-winning shot, if you’re an everyday person, and THAT’S OKAY. I forgot this, got wrapped up in taking a zillion shots, and found 99% of them were crap when I reviewed them at home. Both times I’ve experienced this excursion. With varying equipment. And I’m not the only one. Instead of being a pain the rear, reaching over the other passengers, pinching and zooming, and trying every way possible to get that lion sunbathing on the rock so you can show all your friends and family that you really did seem him, maybe actually LIVE the moment instead? Use your eyes, ears, and nose. Take it all in. Make mental memories, instead of digital. You miss out on so much by trying to get that perfect picture. It’s an unpopular opinion, and kind of a funny one to come from a blogger and photographer, but in the digital age, it’s really okay sometimes to not immortalize everything. 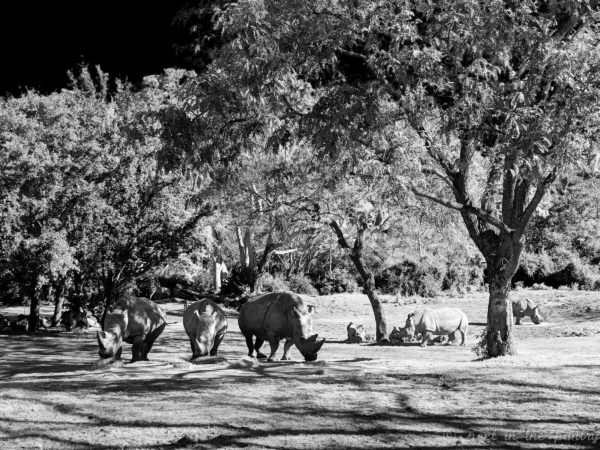 Applying an infrared filter in post-processing helped this photo a bit, but it’s really pretty crappy.

It’s hard to do it all at any Disney Park–which is a wonderful thing, because it gives you a reason to return, over and over again. As such, it’s tempting to step on past the theatrical performances in favor of more ride time. But if you do so, you’ll be missing out on quality entertainment incorporating your favorite Disney characters into Broadway style productions. We were excited to take in Festival of The Lion King, where we were invited to participate as the giraffe cheering section. There were puppets and floats, stilt walkers and singers, and a fast-paced show that sets itself up and breaks itself down right before your eyes in this circle arena. The Zany Tumble Monkeys on the high bar and trapeze were one of my favorite parts, with all their flips and leaps, in perfect coordination with each other. The aerials during Can You Feel The Love Tonight left me breathless–ballet in the air, and it was stunningly executed. All in our group had a great time. We also made it a priority to watch Finding Nemo – The Musical, which is a high-demand show. It’s a quick, 40-minute romp through the film in musical theatre format and I was delighted by the costumes and puppetry! Both of these shows are put on at regular intervals throughout the day–an amazing feat by very talented cast members! I highly recommend timing your viewings so that they occur at times when you might start to be waning on energy to make it through the day, because–bonus!!!–they occur indoors (air conditioning and shelter from the sun!) and you get to rest your feet for a short while. This may just help you work up the stamina to make a full day at the park! 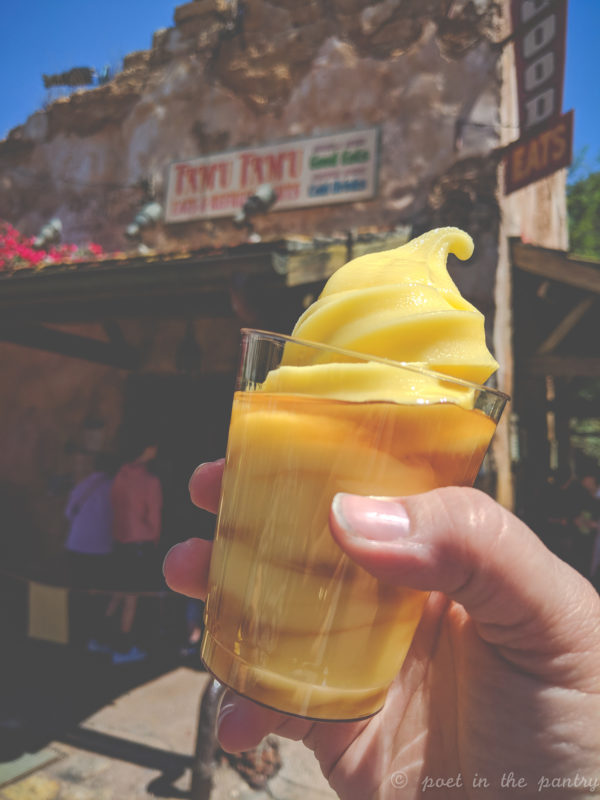 Dole Whips aren’t exclusive to Magic Kingdom anymore!!! And, at Tamu Tamu Refreshments, for only a few bucks more, you can get your pineapple Dole Whip doused with dark rum or coconut rum! Call me crazy, but this thrilled me to no end. I called it my adult float (and it’s the only “float” you’ll get here, since it’s ice cream only otherwise). The shot of rum was just enough to transform your kids’ favorite frozen treat into something special for moms and dads, without getting you trashed on your family vacation. Definitely worth the stop in the Harambe Village section of Animal Kingdom. AND, if you time it right, you can experience the Tam Tam Drummers of Harambe while you indulge, as they are located adjacent to this snack stand. 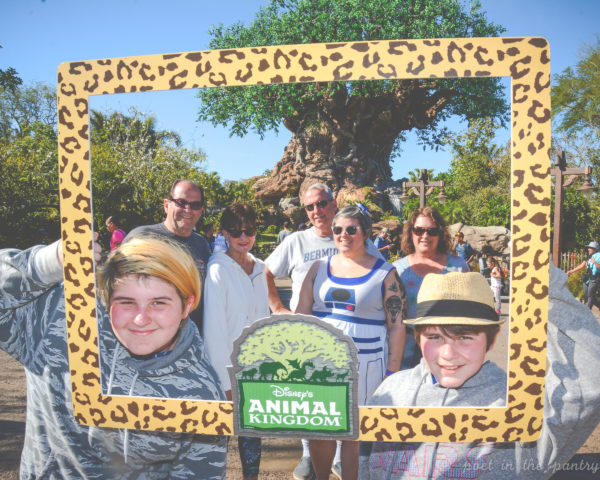 Not far from the Tree of Life, at the entrance to the queue for the meet-and-greet with Russell  from the movie UP, sits one of the best little interactive surprises in the park: Russell’s Bark-O-Lator! As the tag on the machine indicates, Russell found it and Mr. Fredrickson helped him fix it for his advanced Appliance Repair Badge. The machine allows you to learn dog language by translating your barks into English, in the adorable voice of Dug. We spent a silly amount of time messing around with this voice box (and yet, I managed to take no photos of it…). It’s simple entertainment that helps break up your day, and it’s a great stop on your way in or out of the park. You can view a video on BigFatPanda’s YouTube page to get a taste of this experience (and then be sure to add it to your list!). 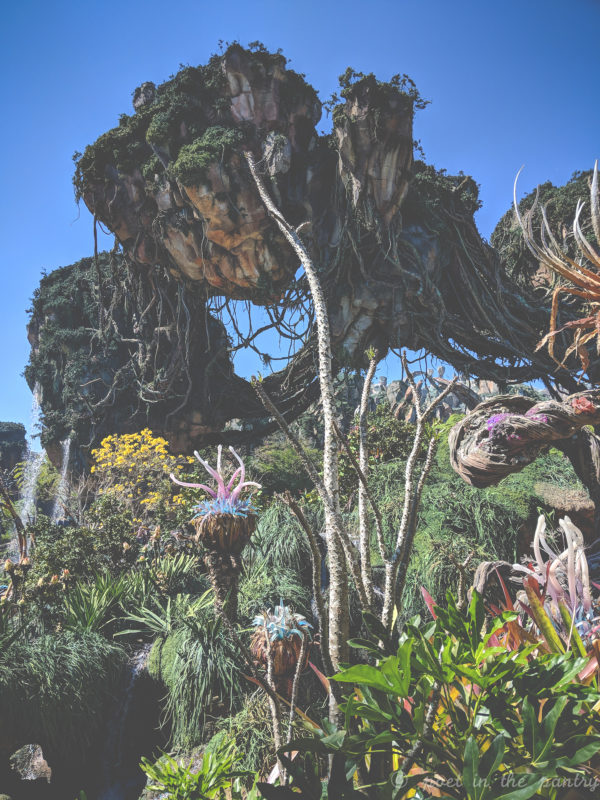 What are your favorite parts of Animal Kingdom? 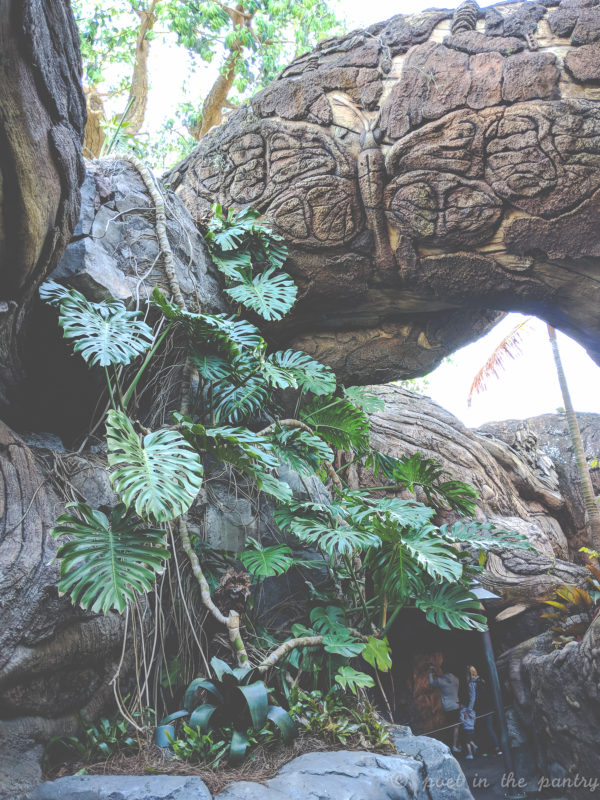