Disclosure: I am honored to be a member of the Stonyfield Clean Plate Club. I received product/coupons from Stonyfield Organic and Justin’s for developing this recipe for Chocolate Hazelnut Cookie Smoothies, but all opinions are my own. Thanks for giving some love to the brands that love Poet in the Pantry. 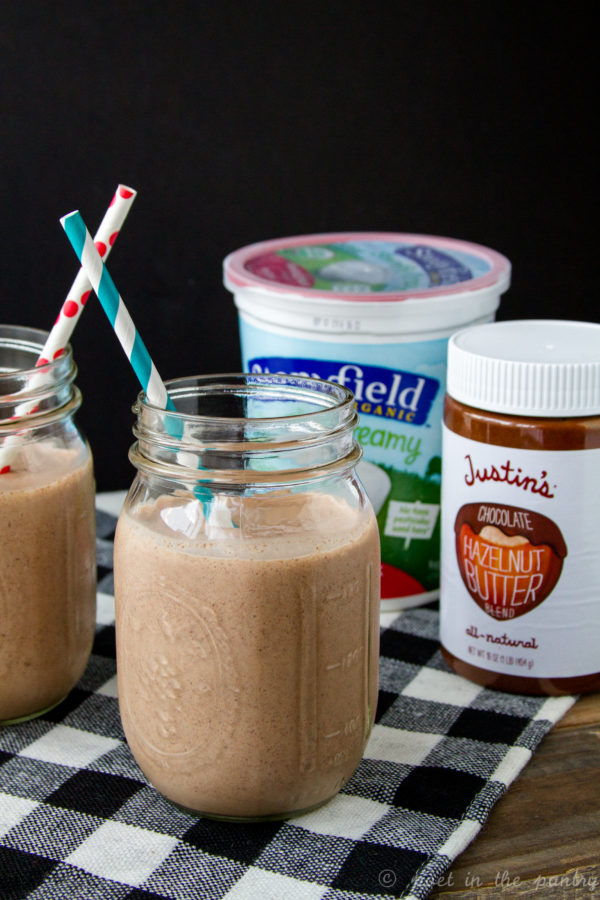 School started today. Somehow, it snuck up on us. I mean, I knew which day it would be. It was marked on my calendars–yes, I have multiple calendars, both digital and paper–but that wasn’t the problem. It was more like summer passed without me spending time with my kids the way I intended. 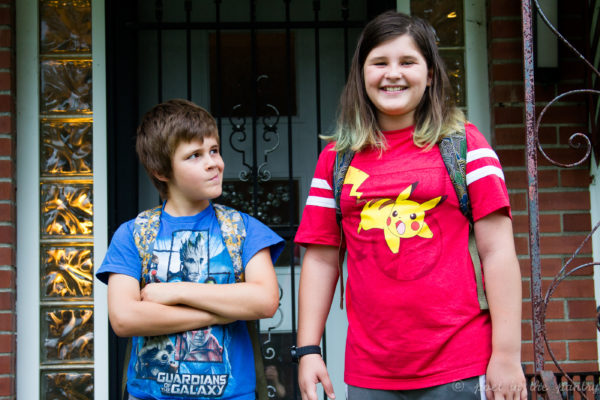 Regrets? Yes, I have them.

I worked my butt off in July. I don’t expect sympathy or accolades for that. It was a choice I made and I’m glad I did. I pushed my boundaries and found that I was capable of more than I believed. But then, I crashed. 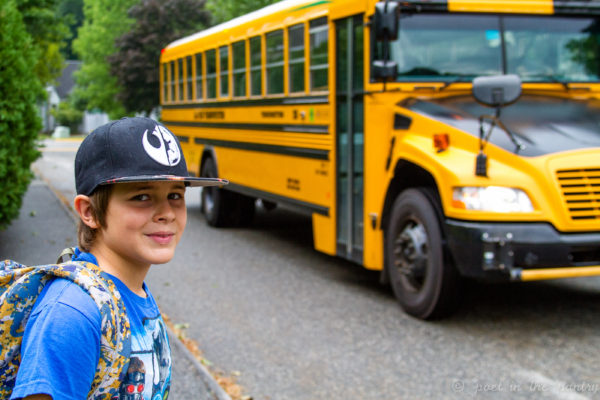 I hit a wall, both with my health and available time. How do I manage to work full time and lead this glamorous life (LOL)? I use almost all of my vacation time for blog projects. No problem–Friday afternoons, I’m dismissed at 1 PM from my place of employment, set free into the world to do as I wish until 8:30 AM on Monday.

However, my kids ended up in a camp that offered field trips every Friday. If your child attends on a Friday, s/he must go on the field trip–for an added fee–and the field trips would end after when I intended to break my kids free from their summer shackles. It’s why I purchased Six Flags season passes for Christmas last year. It’s why I tried to avoid scheduling projects for Fridays. It didn’t come to fruition. 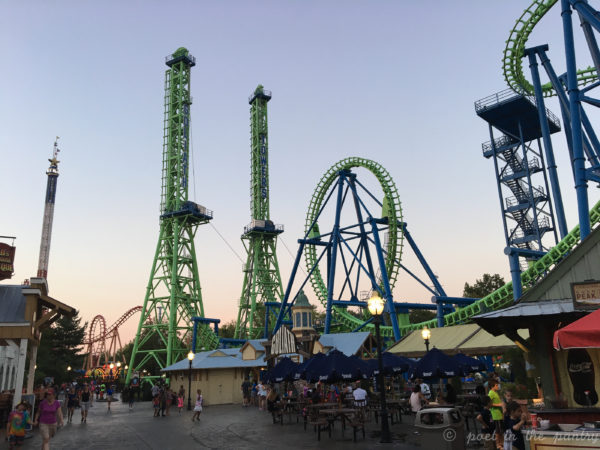 Yes, summer has passed. I managed ONE Friday with my kids. One day when I took them to the amusement park, where I mostly sat on benches reading. But them? They had a BLAST! 8 hours whizzed by and before I knew it, it was time to depart. The last Friday of summer vacation. The only whole day I spent with them.

School started today. I now am the mother of 6th- and 4th-graders. Separated into two different schools, they’re now on different buses and schedules. My daughter will be pushed a bit harder this year–I hope she finds that she is capable of more than she believes. I know she is. 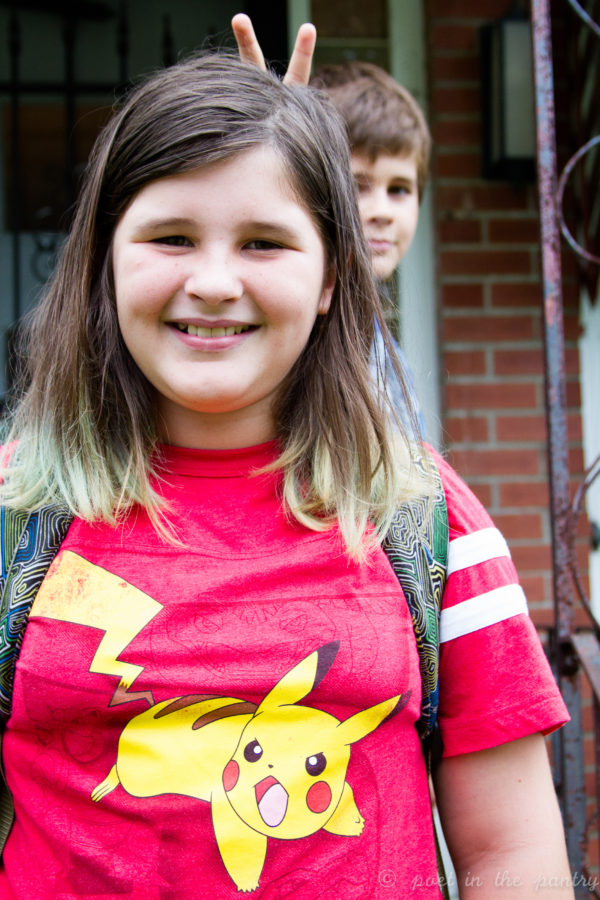 6th grade means changing rooms for classes all day long and study hall and clubs. I tried encouraging my shy tomboy with tales of my own 6th grade experiences, so vivid in my head that it feels like yesterday. But most especially, I tried to nudge her toward drama club. When I was her age, no 6th grade kids participated. It was open to us, so I’m not sure why, but it didn’t draw participants from my age group. It was one of those scary things that I found I wanted more than I feared. And it paid off.

Under Ms. Pernal’s direction, I was cast as Roxie in Lucky, Lucky Hudson and the 12th Street Gang. I had few lines to remember, so I spent the bulk of my time fostering a mad crush on this scrawny 8th grader who played Steve, who had no clue who I was and no intention of finding out. I had to borrow my mom’s leather bomber jacket for my costume, which I wore while trying to look like a tough gangster. It’s not a serious musical, though, which is good, because I doubt anyone would have taken me seriously as a gangster. Still, it lit a spark in me that led to logging enough hours in theatrical pursuits to be inducted into the International Thespians Society in high school. 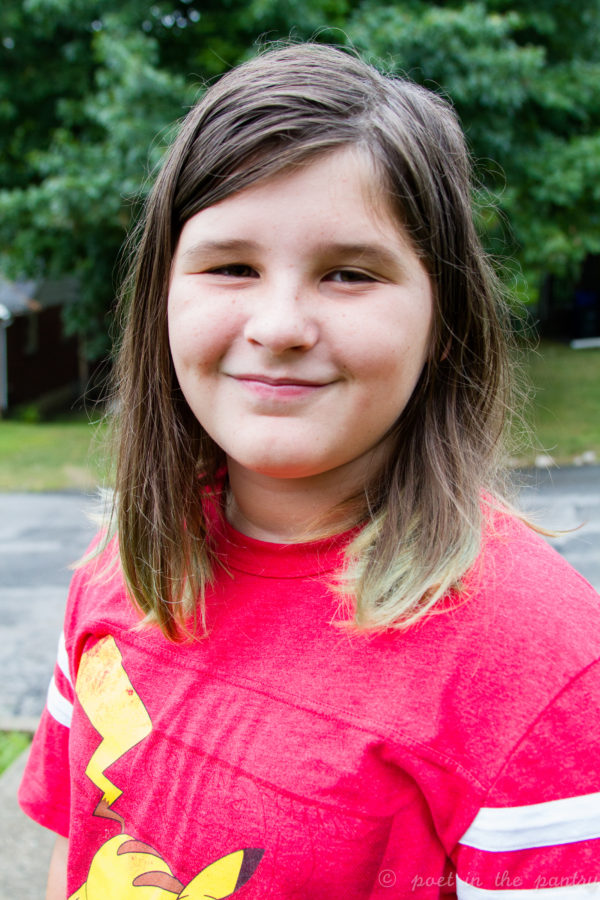 Right now? My daughter’s only interest is in doing what her friends are doing, which just happens to be drama club. But hopefully, that spark lies inside her heart, as well, just waiting to be fanned into a full-on flame.

6th grade comes with another adjustment–having to be ready for school an hour earlier than before. While we would leave the house around 7:30, so I could drop the kids off at my mom’s house before going to work, her bus now arrives at 7:38 AM precisely. This is a girl who would typically comb her hair in the car, eat breakfast at Nana’s house, and brush her teeth there, as well. Now, she’ll have to be walking out the door fully prepared at nearly the same time. Today went well. She woke early, dressed herself, and prepared her lunch the night before, so it would be easy to toss it in her lunch bag and go. While she did very well, I see a lot of smoothies in our future. They’re quick, they’re easy, and they’re a great way to guarantee a nutritious start to the day. 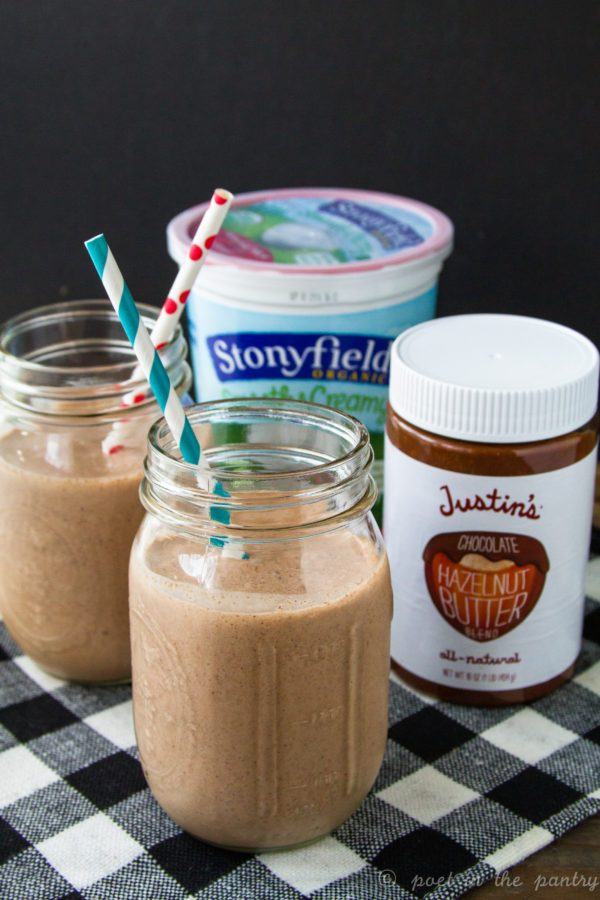 It’s such perfect timing that I partnered with Stonyfield Organic and Justin’s last month to develop a recipe for them, because yogurt and nut butters are fantastic ways to power you up in the morning! But just because you’re trying to be healthy doesn’t mean you can’t have some fun, too! 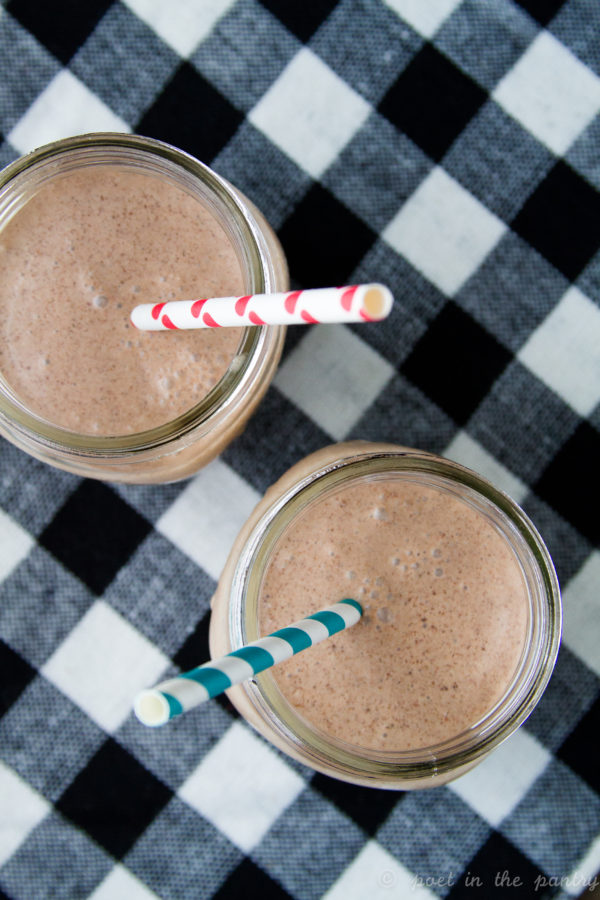 When I started working on this recipe, I had cookies on the brain. (Let’s face it–when don’t I?) But how do you make a smoothie capture the essence of a cookie? I decided that it would have to have rolled oats, which boost your fiber and happen to be a great cookie ingredient. Since we’re going for the idea of indulgence, I just had to use Justin’s Chocolate Hazelnut Butter for this task. It was really difficult to not devour those spoonfuls of that Chocolate Hazelnut Butter by themselves–oh, my, it’s so dreamy! But I needed that protein IN my smoothie, so into the blender jar it went. Stonyfield Smooth & Creamy Whole Milk Plain yogurt adds some probiotics for your belly, and then a couple of dates for a touch of natural sweetness. I throw hemp hearts in almost every smoothie I make for the Omegas. Then a bit of vanilla, for that cookie vibe. A whizz of the blender and you have a complete meal in a glass–2, actually. It’s nice to share, after all. Try not to lick that spoon that was in the Justin’s… I dare you! 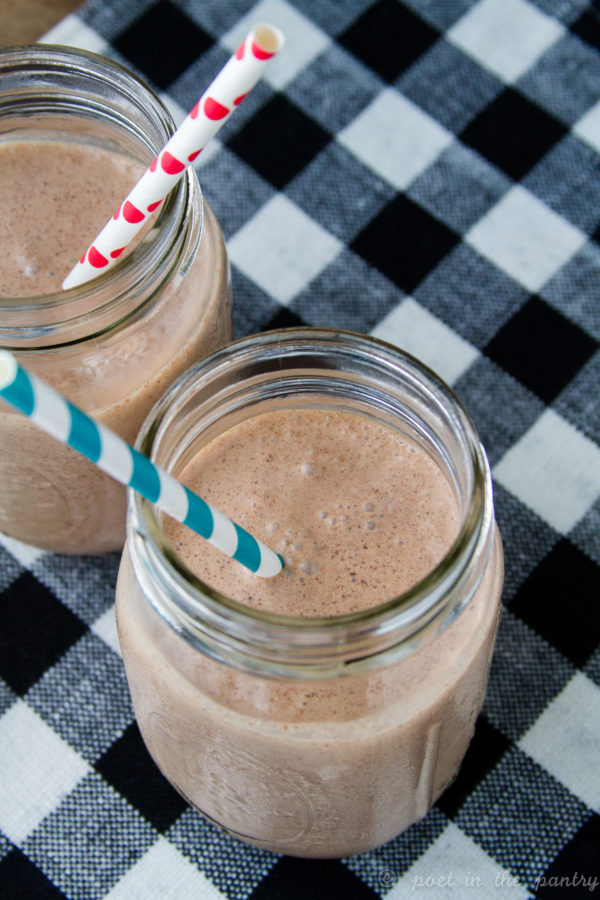 Yes, we’re going through a lot of adjustments here this year. But breakfast doesn’t have to suffer in the process. 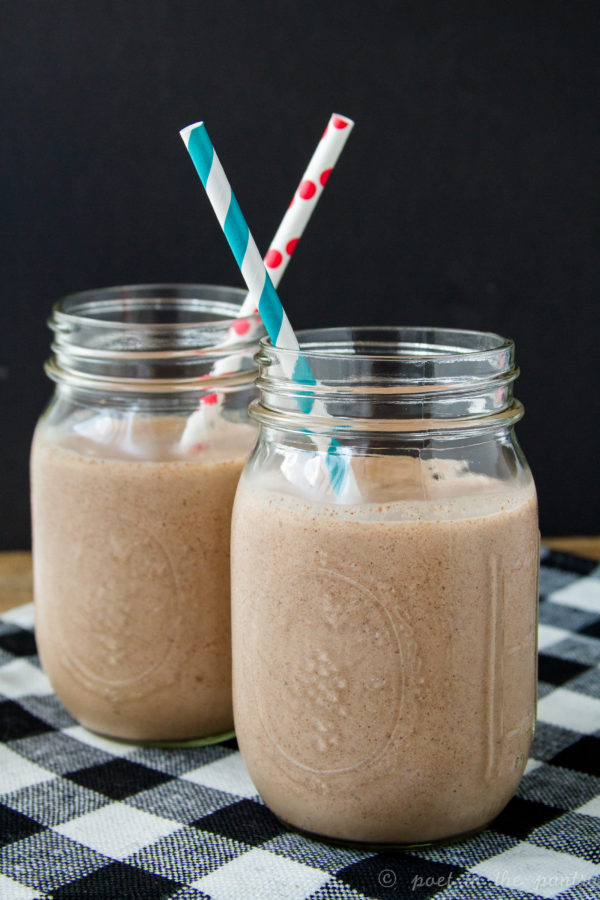 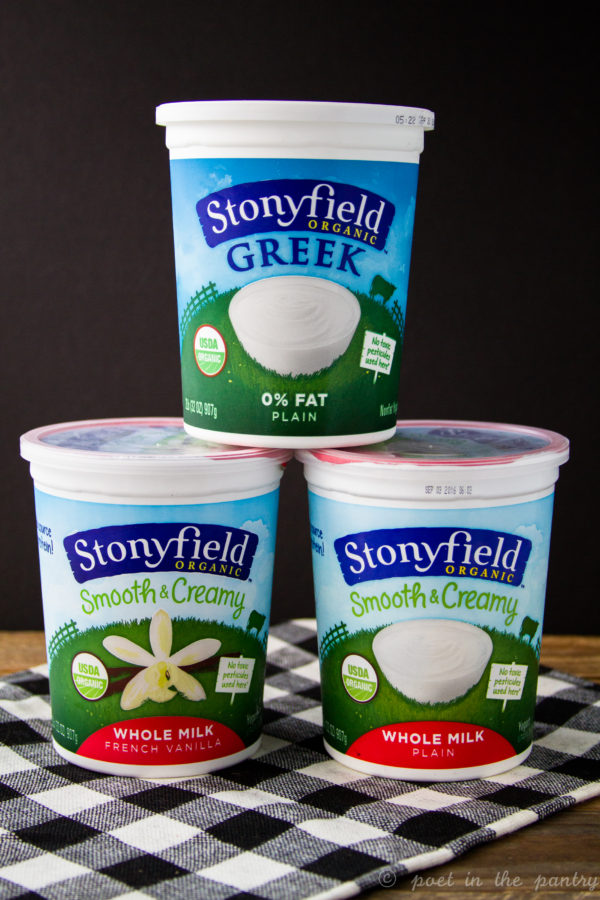 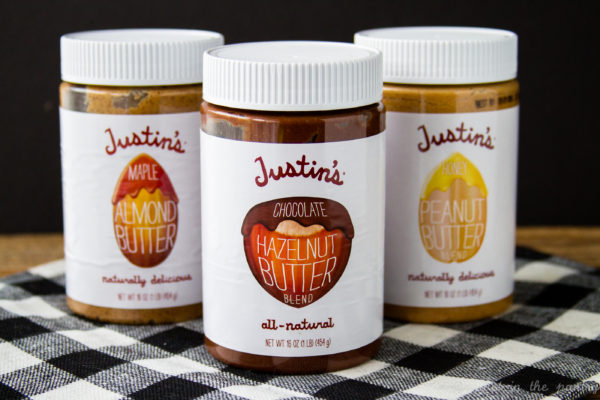