Search the internet and you’ll find a variety of cocktails that go by the name Bee Sting.

Some contain gin. Others rely on Scotch. I’ve even found tequila! But the super easy Renaissance Faire version…apparently, a drink has no name?

During both of the last two weekends, I traveled back in time not to 1955, but to a simpler era. When a thug named Robin Hood ran rampant in Sherwood Forest, stealing from the rich and giving to the poor, much to the dismay of the Sheriff of Nottingham and King John. Was it the 14th Century? The 12th? I’m a little confused. (Heck, I can’t even remember which is my favorite version of the story, though Disney’s and Robin Hood: Men in Tights are high on the list…) Regardless, the Robin Hood Springtime Festival at the North Haven Fairgrounds in Connecticut allowed me to take this journey, escaping an otherwise average 2016 day to seek unknown adventure.

And yet, I somehow managed to not bring my DSLR, lived mostly in the moment, and shared limited food photos on social media (and they disappeared 24 hours later, because they were all on Snapchat). Shocking, I know.

Part of it was that the conditions just weren’t ideal for high quality photography–at least, not during the Feast of the Merry, my main event, which was held in a large shed on the fairgrounds with only garage-style overhead fluorescent lights for illumination. Great in a pinch to keep us out of the dark, but not so great for appetizing photos. Part also was that I wanted to immerse myself in the experience. The two-hour feast did its best to emulate court life in the 14th-16th Century atmosphere we were at least attempting to become a part of, even if our garb never would have even been imagined in our inauthentic-yet-entertaining re-enactment. (Which is my way of saying, who cares, have fun, it doesn’t really matter!) Between courses (I’m sorry, removes), performers arrived at our shed to sing to us, tell raunchy jokes, dance, sing raunchy songs, and even fight with each other, without us ever having to leave the table. What a great way to get a taste of everything the Festival had to offer–and I mean everything.

I bought my ticket early and paid a discounted rate, but even at the full price of $45 (which included entrance to the festival, as well–a $19 value), the Feast of the Merry would have been worth every penny. We worked our way through 6 courses, including: assorted cheeses and grapes; ale and cheddar soup; salad; sausage and sauerkraut pies with spicy mustard and cornichons; roasted pork loin in stewed fruit with port wine gravy; and mini apple pies. And table service included beer, mead, and Bee Stings a plenty (for an additional price). By the time we got to the apple pie, I could manage no more than a couple bites. Darn those old fashioned bodices!! No wonder why women were thinner. My belly was full–the feast was over. 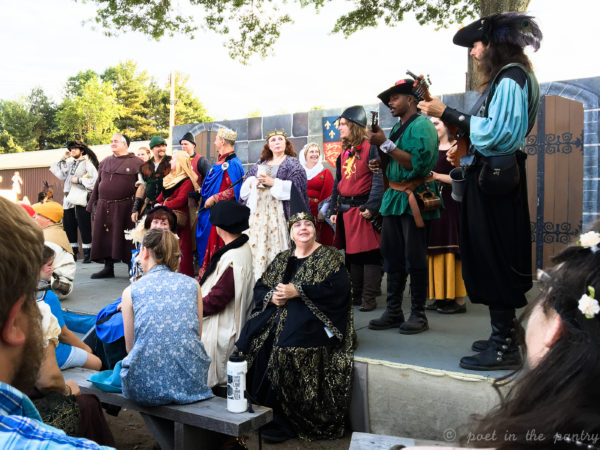 Thank goodness it turned out that Sixpence Pie Company in Southington prepared our feast! I tried one of their pies at the Fall Connecticut Renaissance Faire and vowed to drive down there to try more, but somehow…it never happened. I can now add 2 more of their pies to my list of tasty morsels I’ve sampled, and will definitely need to investigate their other offerings at their North Main Street shop. Road trip!

The rest of that Sunday was spent watching shows (some of which familiar because they entertained us during the feast), checking out wares, and trying to keep cool in the hot HOT sun. We learned that the following weekend, Nottingham After Dark would return to the festival, an adults-only evening that would begin after the gates closed at 7PM. Enticed by the promise of a ladies’ bodice contest, bawdy songs by the Graces, even bawdier jokes, an over-the-top Pope-rah show, and, of course, the men in kilts contest, I made room in my schedule to return this past Saturday.

I also fashioned a new costume during the week in between. My only other garb was pieced together at least 15 years ago. It was time. (I also gave myself permission to just have fun with it because, really, who are we kidding here? It’s all in good fun–there’s no need to agonize over whether it’s appropriate attire for the time period in question–which is entirely fictional anyway!–or which country is the origin. Life is too short for that level of detail.)

Saturday night, as the sun started sinking in the sky, I walked through the gates again.

Can I just say that one of my favorite parts of the festival is all the compliments you get when you enter? A girl could really get used to that level of flattery. 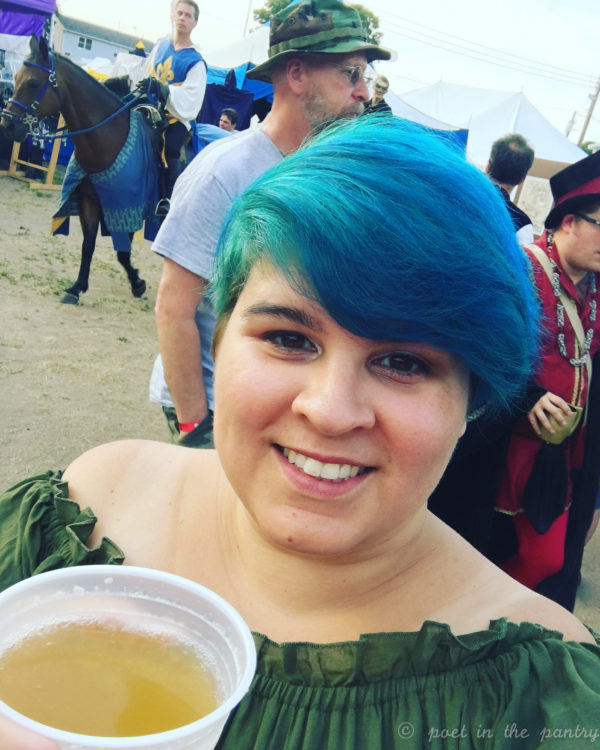 I grabbed another Bee Sting–2nd to last customer in line–and my friends and I sought out seats for the show. They were hard to come by, but we did manage to get in the 2nd row on the side. An imperfect view, but we could hear better from our vantage point. And then, it unfolded.

And I can’t share 90% of that on here because I try to keep this pretty family-friendly.

But it was a really good time. It was base and the crowd got rowdy, but it was all in good fun. And the men in kilts? Yum. The contender I was rooting for, Ian, sadly, did not make it to the top 3, but I was pleased to see that it wasn’t purely a contest of who was the youngest and fittest–even though it appeared that way for a while when young Marc (who reminded me of one of the unsullied army on Game of Thrones, though I really hope he isn’t a eunuch) received a lot of attention from the judges. In the end, though, it was John who won–a man in his 50s who showed the young guys that maturity can be quite attractive. Bravo!

So, yeah? What was I talking about again?

Oh, Bee Stings! The RenFaire version isn’t fancy. It isn’t even made from hard liquor. But that’s what makes them so darn drinkable. Just take some mead and hard cider, pour them together in a cup, and sip. And save yourself the $14 price tag, in the process. Costume optional (though I rather like my new one… maybe I’ll slip back into it tonight…). HUZZAH! 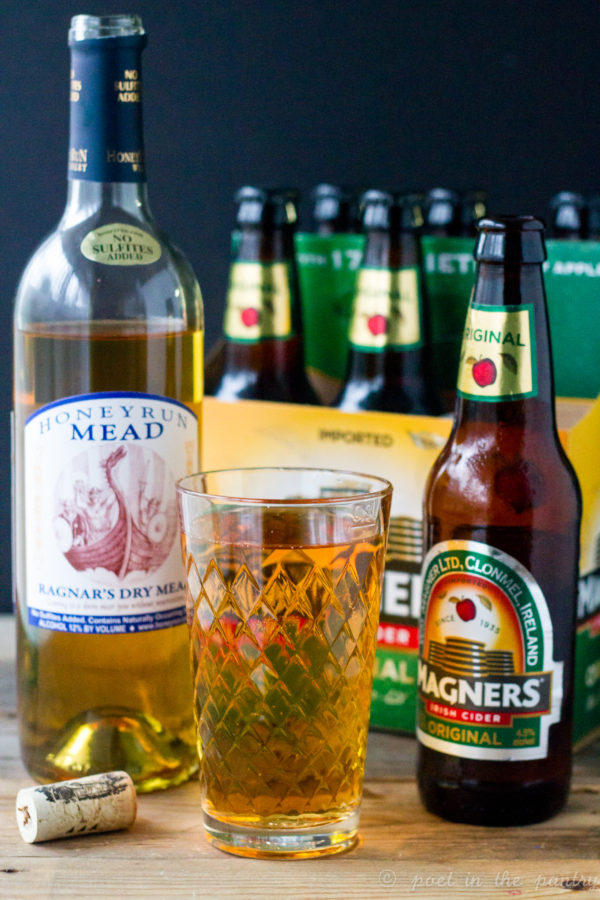 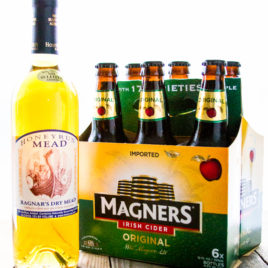 I did find notes on the internet recommending other ratios (2:1 cider:mead, 3:2 cider: mead), but I like it half and half. You can adjust to your taste. I've also seen a honey hard cider that would probably play quite nicely in this. 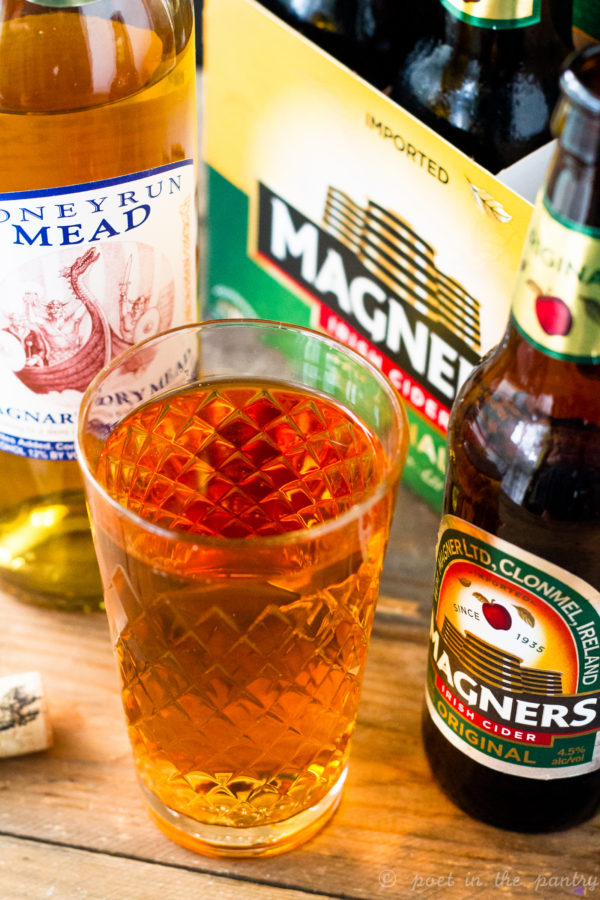