When I was a boy and I would see scary things in the news, my mother would say to me, “Look for the helpers. You will always find people who are helping.” To this day, especially in times of “disaster,” I remember my mother’s words and I am always comforted by realizing that there are still so many helpers – so many caring people in this world. – Fred Rogers

I try to be a helper.

At least, in as much of a way as my introverted, broke-ass self will allow. I spread the word through social media about my friends’ events. I divert some of the grocery money for donations. I purchase from my friends’ kids’ fundraisers. I even ran a bake sale for No Kid Hungry, once. Still, there never seems to be enough time or money to properly do my part. And I feel like a jerk about it.

Then it hit me one day: I should start donating blood again.

I began donating blood as soon as I was allowed. My first time was at a blood drive in the high school gymnasium. I eagerly hopped up on the folding metal table, ready to submit myself to a little bloodletting for the greater good. The fluorescent lights were bright. There was a buzz of activity all around me. And everything was great… until it wasn’t.

My first blood drive taught me the term “rolling veins.”

And how awful it can be when your veins don’t cooperate and the phlebotomist has to adjust a needle already sticking out of your arm in an attempt to squeeze out every last drop needed. Three times.

Despite this traumatic experience, I persisted. After all, the first time at anything rarely goes well. It was just jitters.

But it wasn’t. Each subsequent donation, I left feeling like a voodoo doll: poked and prodded thoroughly for someone else’s pleasure (or torment). Finally, by the time I turned twenty, I stopped donating blood. It had grown too torturous to endure.

I don’t do enough to help.

Deep down inside, I worry that I am not a good person. That my feeble attempts at contributing to society prove that I am really just a self-absorbed douche. That while I have good intentions, they don’t mean much in the grand scheme.

I don’t know how blood got on my mind again, but one day, I opened the Red Cross’s website in my browser, set up an account, and selected an appointment at a location just down the street from where I work. And then I had to reschedule it because one of my kids was sick and I was afraid she’d be sent home from school. And when the rescheduled day finally arrived, I showed up early and logged myself in on the computer–a step that wasn’t part of the process 18 years ago–and found that I had to take a number, even though I had an appointment.

No, it wasn’t the greatly-revolutionized experience I envisioned. The long wait was not eliminated by technology. And now, there’s an iron test that precedes the full blood draw–my poor fingertip! But the young woman who guided me through it all was entertaining. We bonded over our unnaturally colored hair–hers a combination of black and blue (ha, ha), mine a fading lavender. She insisted that I had to laugh at her jokes, since she was about to jam a needle in my arm. And I finally confessed to her my rocky past with the Red Cross…and was assured that not only are my veins beautiful, but that the people who pin cushioned me before clearly had no clue what they were doing. In went the needle on the first try. And I filled that bag in record time. Yay, me!

I’m so good at bleeding that she had to try twice to get the flow to stop before I was bandaged up.

Then an extra bit of pressure tape was added, for good measure. I guess this is what happens when I’m actually hydrated. 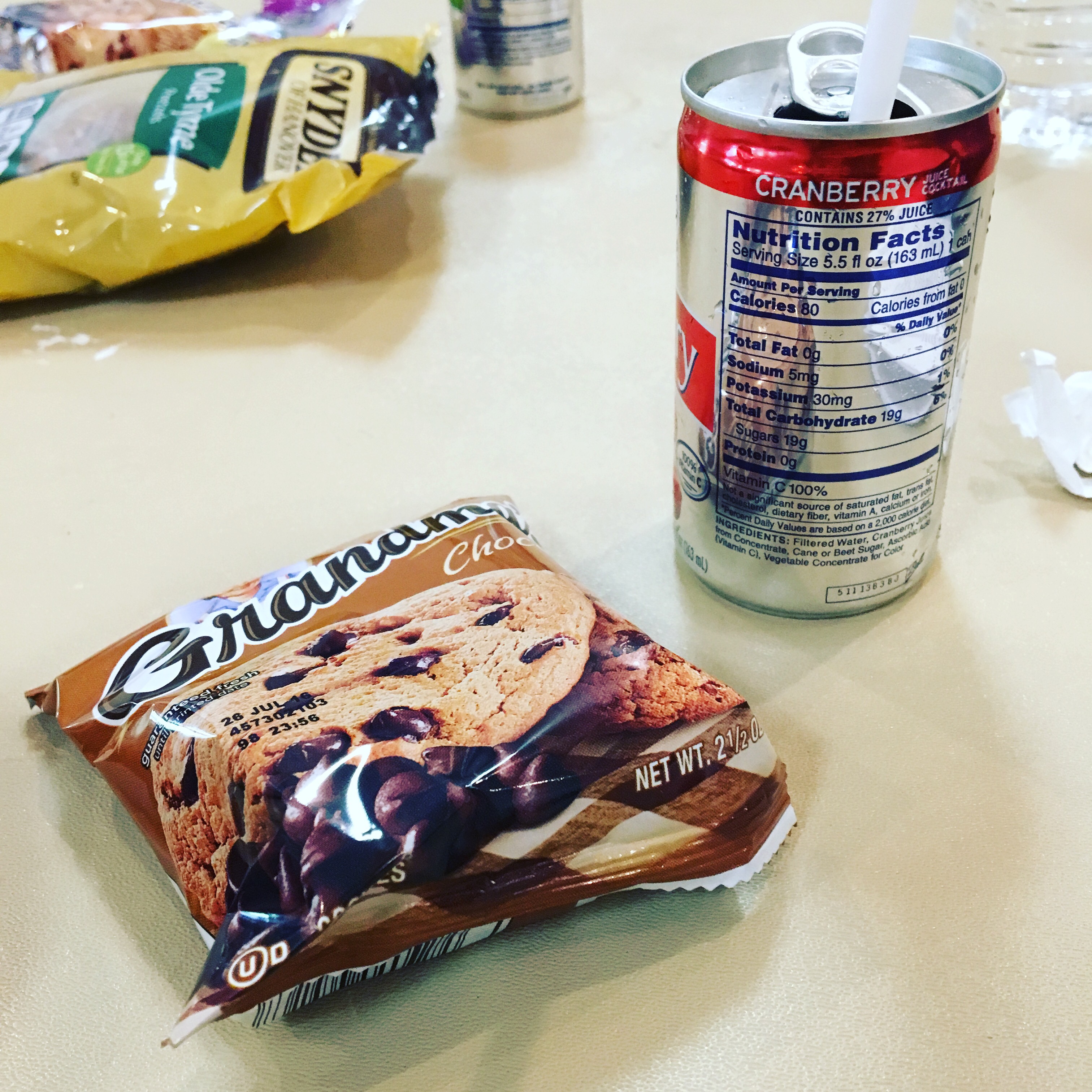 I signed up for another donation in June. It was uncomfortable and inconvenient, yes. I still hate needles and the sight of blood. And who knows how many people got a peek up my dress while I was splayed out on the table. But it’s something I can do that absolutely will help someone. Up to 3 someones, actually. And it doesn’t require me to do anything crazy, like talk to a lot of strangers. I may not do many things well, but I sure can bleed. Why not do it for a cause?

Did you know that every 2 seconds someone in the U.S. needs blood?¹ Interested in donating blood, too? Log onto the Red Cross’s website and search for a blood drive near you!