Even though I built you up for my trip to Portland and Seattle last month for the International Food Bloggers Conference, I left you hanging with the details. That will be changing shortly. To make up for the delay, I’m jumping straight to my favorite part of the trip, which had nothing at all to do with the conference: my whale watch excursion from Anacortes, Washington. 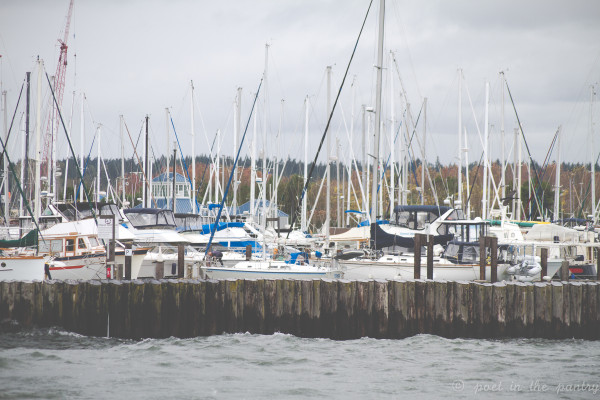 For months leading up to this trip, my friends and I discussed what we would do while in the area. You can’t fly to the other coast without leaving yourself some time to explore, too. On the last full day of my trip, we escaped from Seattle and trekked 1.5 hours north to Island Adventures Whale Watching in Anacortes to board a boat in search of sea creatures. 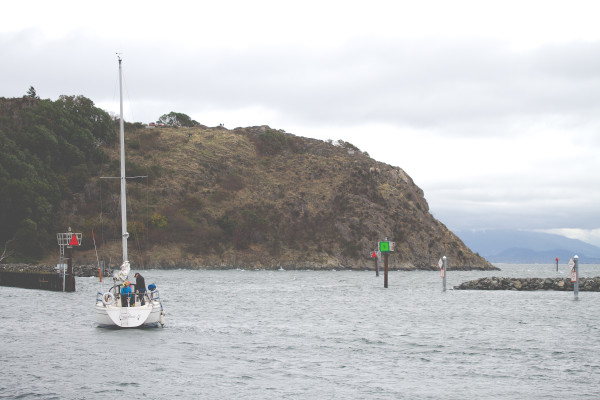 The forecast was dismal. Rain, lots of it, and high winds, too. The thought of spending 6 hours on a vessel in these conditions was a bit disheartening, but I tried not to let it get me down. We’d be seeing whales, after all, and not just the humpback whales usually found on the trips from Cape Cod (which I’ve already experienced). With orcas on the mind, I raised the hood on the too-tall jacket I borrowed from my husband, steadied my stance, and we were off to sea. This would be wonderful. 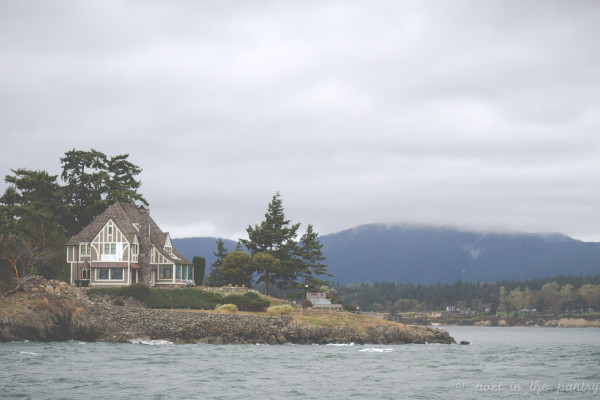 The rain came and went during the cruise out, sometimes heavy, sometimes a mere drizzle, but never really going away for quite some time. I hung out at the aft of the boat, somewhat sheltered from it, but disappointed that I would also likely be the last to make any discoveries. We were all commissioned by the captain to keep our eyes peeled–we were in this together. From the fog, mountains emerged on the Olympic peninsula. Occasionally, we’d see a boat. But not much else. 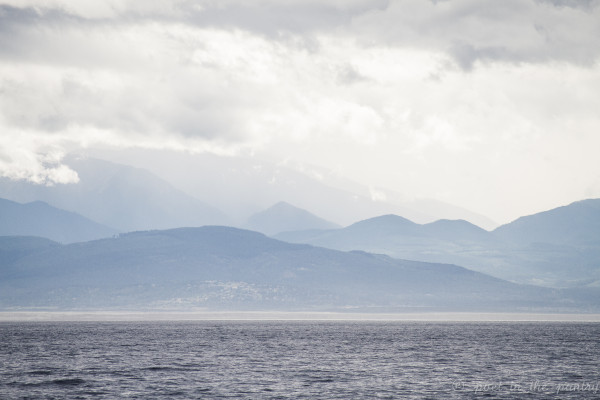 And then…there was a flock of birds on the horizon, gathering in a frenzy. The naturalist, Bart Rulon, instructed us that this is sometimes a sign of whales in the area, with both species taking advantage of a bait ball beneath the surface (basically, a bunch of fish swimming together–an easy target for prey). From that point on, I focused exclusively on the birds–they became my guaranteed signal of whales. 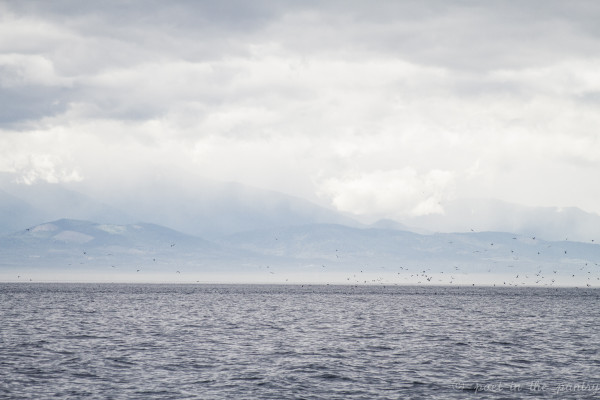 As we headed for the flock, some on the boat glimpsed a minke, the second smallest species of baleen whales. Try as I might, I never did see that little guy–he was crafty. And I was too busy watching the birds, where, we discovered, a fin whale was feeding. Fin whales are pretty rare–what an opportunity! They’re also pretty large, so seeing one in its entirety would be difficult, especially since I had positioned myself at the bow of the boat at this point, now insistent upon being the first to discover anything we might encounter.

I was not successful in obtaining any great photos of the fin whale. But he was there. I swear. 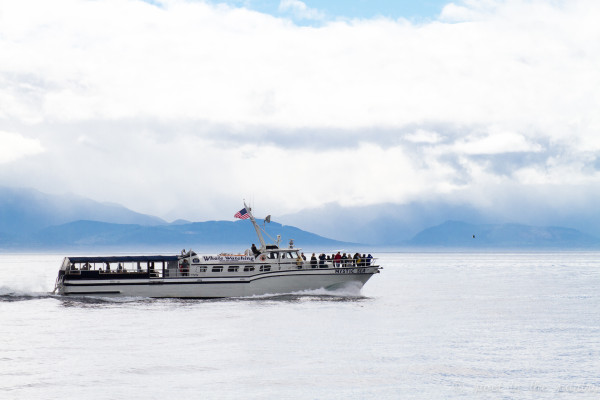 Funny thing about whale watches… where one boat goes, others seem to tag along. Island Adventures docks next to Mystic Sea back in Anacortes, and Mystic Sea remained our shadow much of the day. I remember this from our Cape Cod whale watches, too. It didn’t really bother me; in fact, it afforded me the opportunity to grab a few cool shots of the Mystic Sea while we were out at sea. 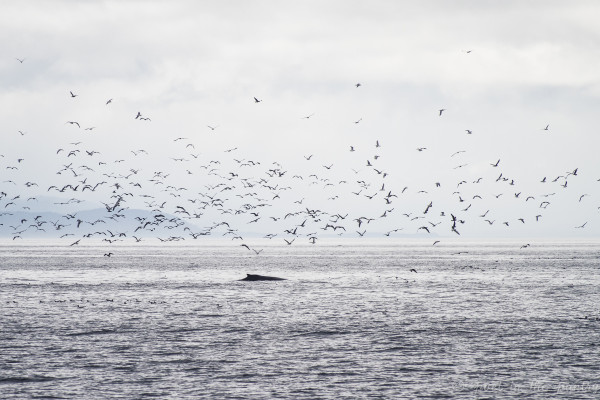 Continuing on, another flock of birds, and this time, the bait ball was feeding grounds for a humpback whale. Are you keeping count? That’s 3 varieties now… None of which wanted to show much more than a dorsal fin. They were darn shy this day. 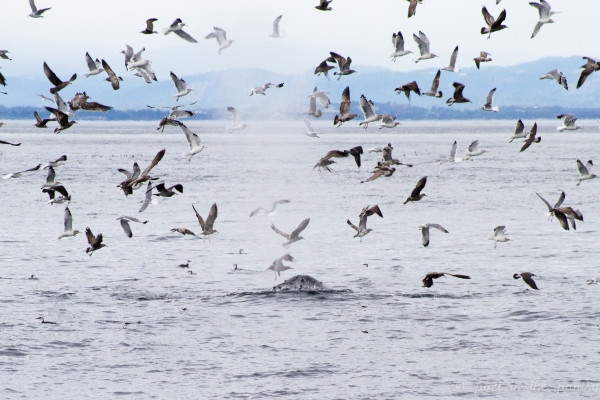 At this point, we were nearing Canadian waters. The Captain joked that if you didn’t have your passport, you better jump ship, or risk seizure. By whom? Maybe one of the orcas ahead off of Vancouver… 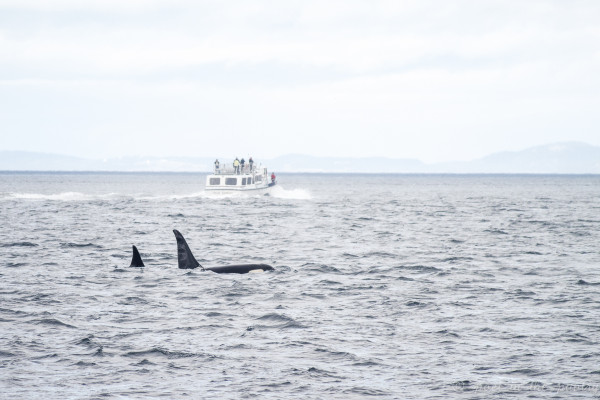 And that’s when we hit the jackpot. Or, as Island Adventures called it, a grand slam–because when we happened upon pods K and L of the resident San Juan Islands orcas, we accomplished witnessing 4 species of whales during one trip. AND–bonus–while a few years passed without any babies (seeing as gestation lasts 15 months for an orca, that’s completely understandable!), there were a handful born this year, including the just-days-old L122 swimming ahead of us! Amazing! 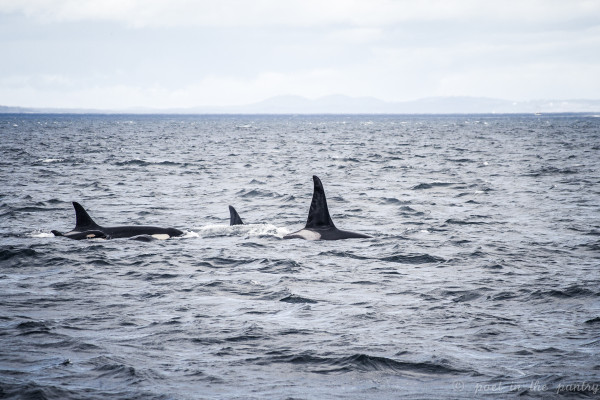 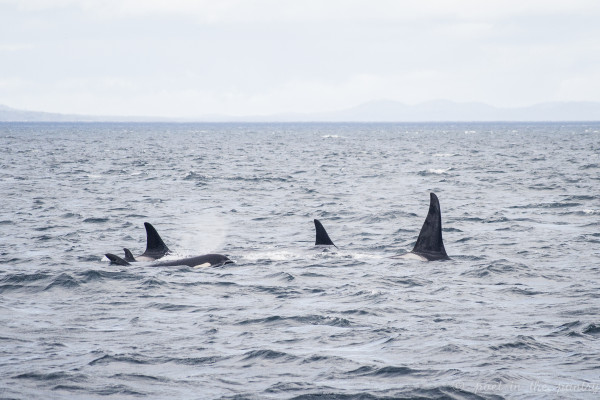 We didn’t get as close to the orcas as some of the smaller boats in the area, but it was awesome, nonetheless! They kept spyhopping to get a better view of us–not a full breach, but popping out of the water just enough to say hi. Well, hi right back at you. 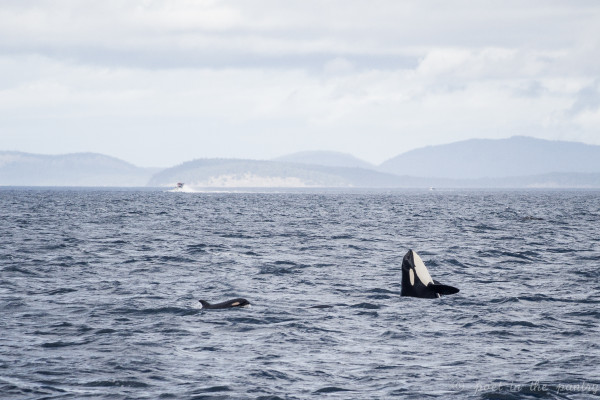 On the ride back, we detoured near Lopez Island to check out some harbor seals attempting to sun themselves on the rocks. The prehistoric-looking cormorants stood guard, sentinels of the sanctuary, spreading a sense of unease. We have them on this coast, too, and they’re so freaky looking. 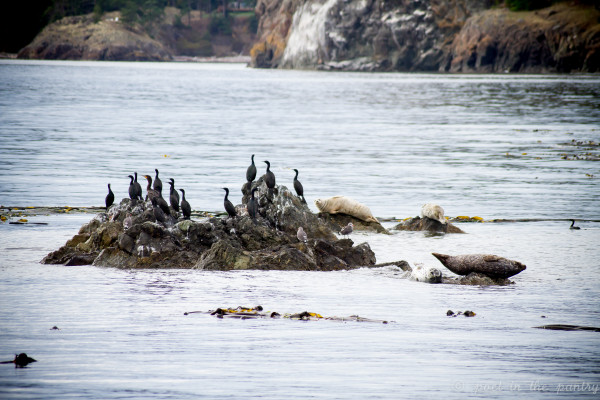 All told, it was a 6-hour tour (thank goodness it wasn’t 3 hours!). The rain subsided in time for the whales to reveal themselves. And while there were no grand displays by most of the mammals, it was enough sharing a few moments with them in their living rooms, realizing that the world is so much greater than the small space we occupy at home. The tour was worth every penny of the $109 price tag. I’m glad we made the time for it!