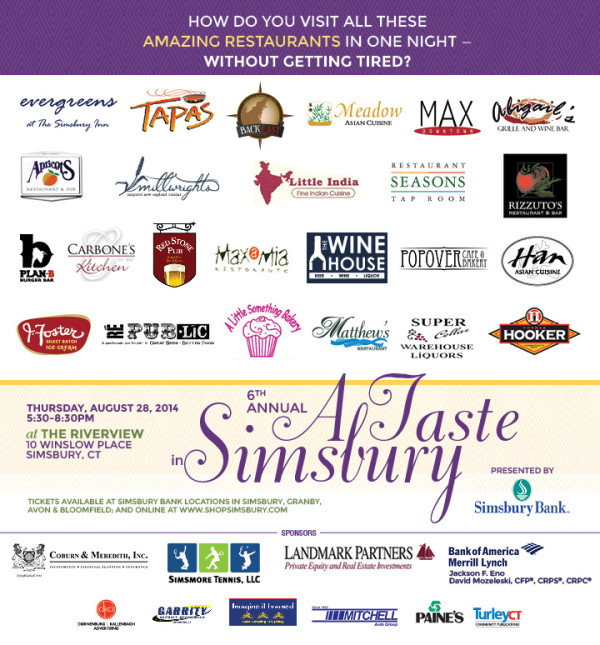 I was lucky enough to receive a ticket to A Taste in Simsbury again this year–a great honor considering all the wondrous food that awaited me behind the doors of The Riverview. This is my favorite food event of the year because it allows me to get better acquainted with the eating options in the area where I work. Simsbury is an area rich in the food department (as well as culture and outdoors pursuits) and I welcome any opportunity to explore its culinary pleasures more. Tickets cost $50 a person and are a steal when you consider that samples are unlimited, usually quite generous, and include not only food, but also beer, wine, and signature cocktails. This is a must-attend event! 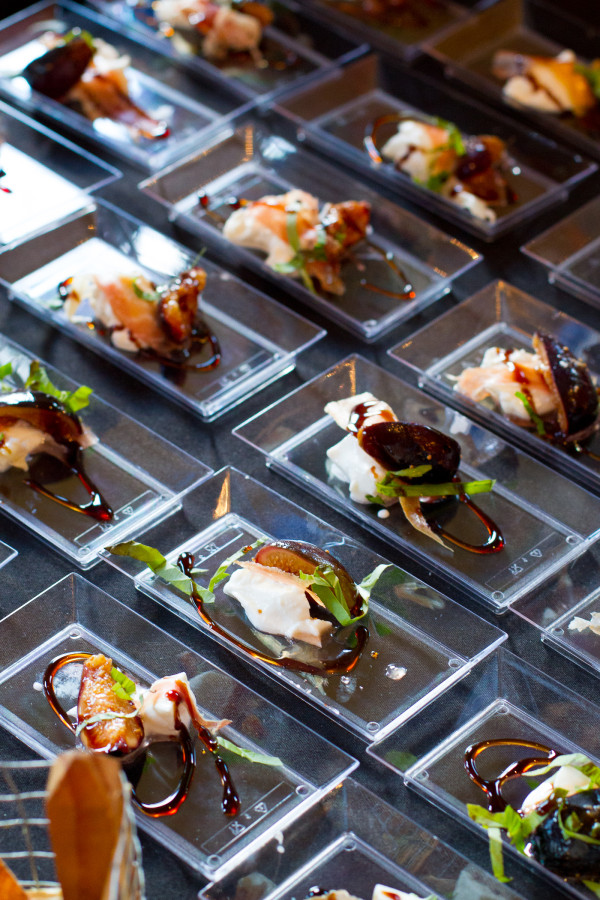 Last year’s big find was Republic, the gastropub where we spent Easter this year–and where I sipped on a Mexicali Rose, which I was happy to see appear as their signature cocktail for this year’s A Taste in Simsbury. I couldn’t help gushing to them about how happy I was with them on Easter AND that they brought this tequila-based drink to the occasion. Their other offering–burrata with Armagnac-glazed figs with Serrano ham and a balsamic reduction drizzle–was a beauty. Not just pretty to look at it, it was a delightful bite. Simplicity at its best. 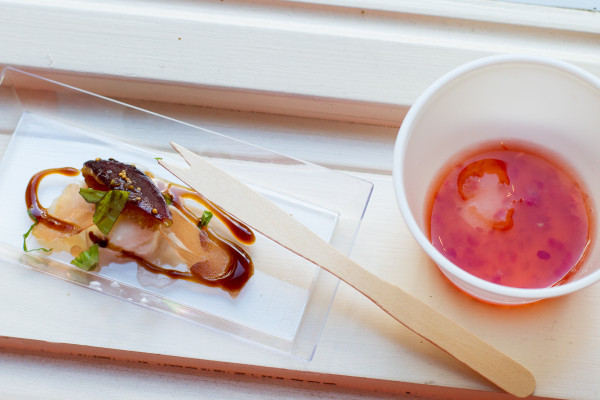 Abigail’s Grille & Wine Bar was my next stop. I got a little lost in the moment trying to photograph their samples, but they were very understanding. They dished out phyllo cups filled with slow-roasted tomatoes and shallots and mini cups of Rosedale Farms corn panna cotta. The phyllo cups, while absolutely adorable, were a little challenging to eat. Bigger than a bite, they shatter after your first taste. Despite the awkward eating, they were quite tasty. This was my first time eating panna cotta and it was a little weird at first–I wasn’t sure what to expect with a corn-based dessert–but it surprised me and was quite enjoyable. Beautifully executed, too! 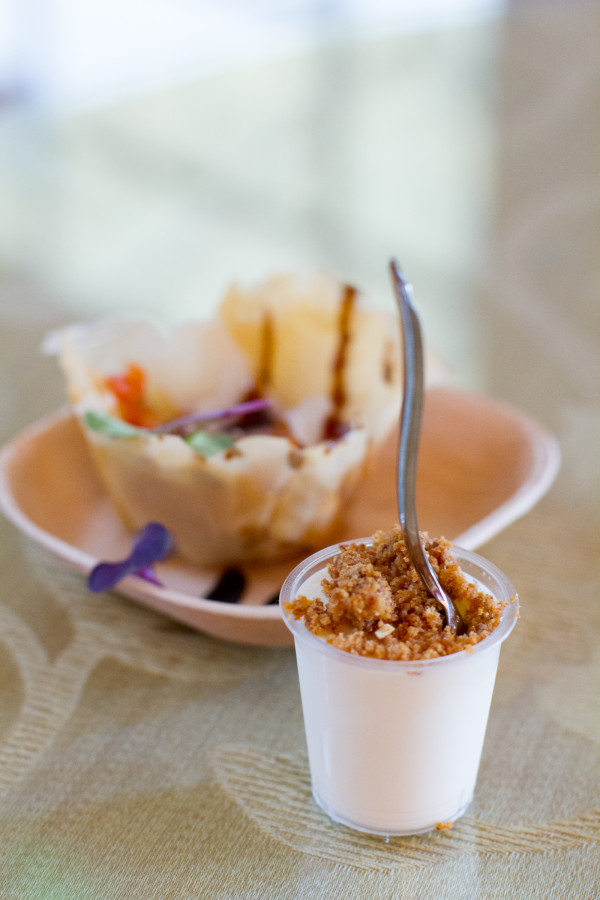 Evergreen’s Restaurant at The Simsbury Inn always has an elegant array of desserts, and this year they did not disappoint! My favorite dessert of the day came from them: toasted croissant bread pudding with rhubarb coulis and honey vanilla mascarpone cream. It was plated perfectly and was the perfect texture. Simple yet phenomenal! I also tried their dark chocolate fudge cake with mango passionfruit marmalade. While it sparkled with star-shaped edible glitter and looked amazing, it was a bit too rich for me. I could only handle a nibble or two before I had to move on. I wasn’t ready for that kind of heaviness so early in the evening. 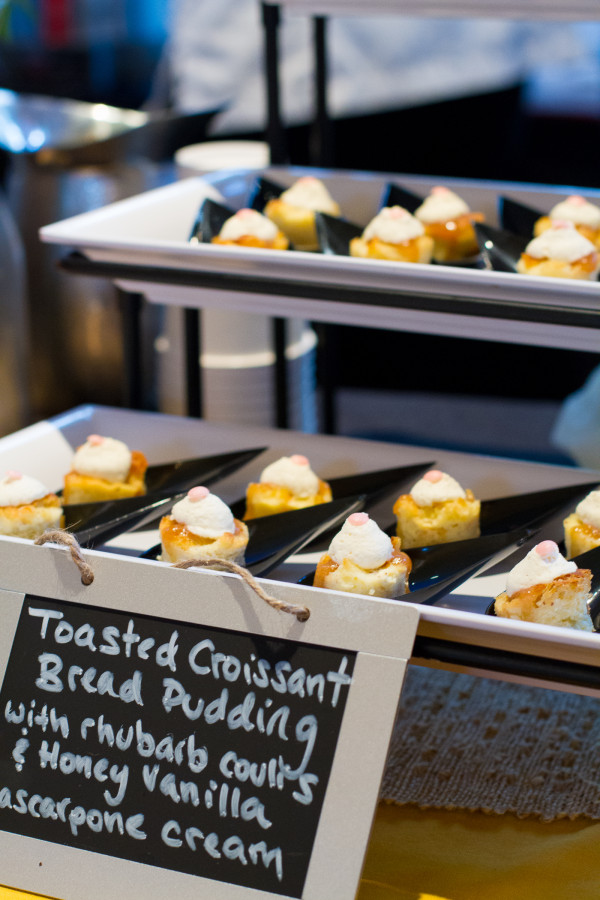 Millwright’s was a bit of a disappointment last year, but they totally made up for it this year with a summer vegetable and lobster succotash with Parmesan crumble. Regular readers know that I don’t really eat seafood. I used to say I didn’t eat seafood (other than fried clams), but the more events I attend, the more seafood I try, and the less that statement holds true. It’s all in the preparation. And Millwright’s got it right with this succotash. Another step achieved in converting me! 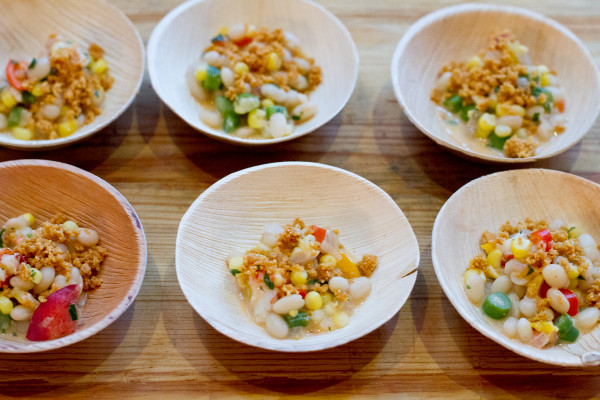 There was a long line at Max-a-Mia, with good reason! They prepared tableside Stracciatella-stuffed squash blossoms with cherry tomato relish and they went FAST. I was lucky enough to get a close-up view of them being fried right there at the table, then plated. Anything fried tastes good–well, most anything–but these were fantastic. Ooey, gooey cheese oozed out after the first bite, urging you to finish quickly, lest you loose some of that goodness inside. Yum! I didn’t catch what else they were serving, but it tasted pretty good. (I suppose I should be ashamed that I can’t decipher on my own what it is, but I never claimed to be an expert either…) 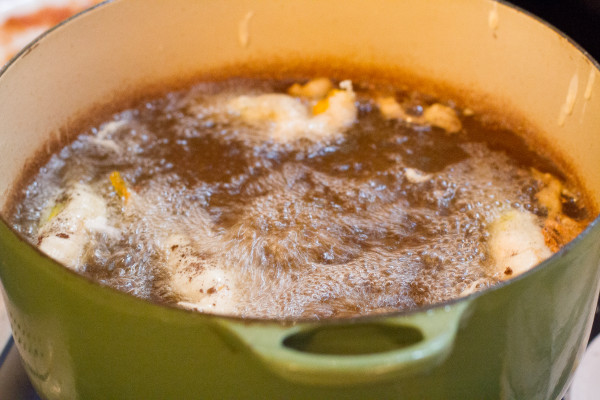 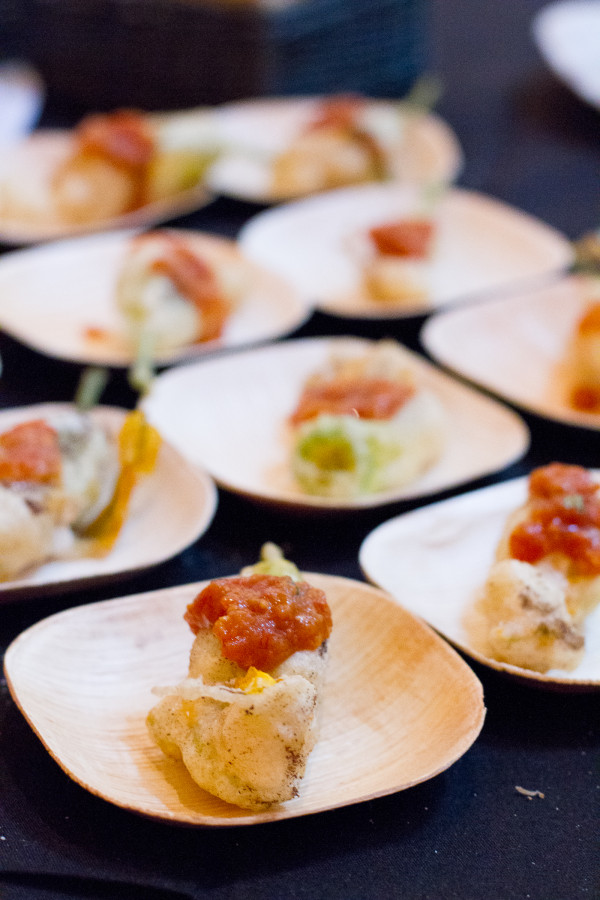 Max Downtown served a bruschetta that had a dazzling array of color in the fresh tomatoes on top. I didn’t expect much from it, but I was pleasantly surprised. A great example of how fresh ingredients can really transform something ordinary into extraordinary. 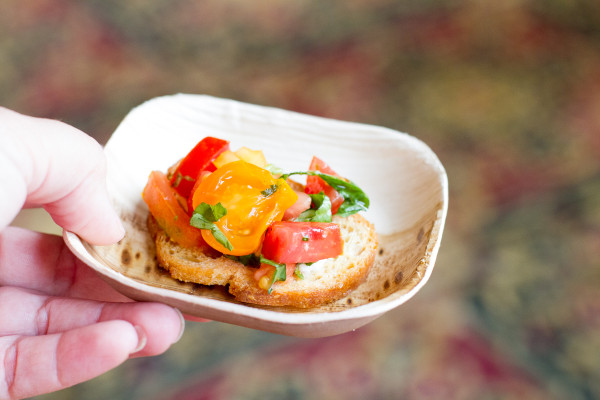 A Little Something Bakery from West Hartford had an adorable display of baked goods. You know me and the baked goods! I selected an apple cider dirt bomb for my taste from them. It was pretty good, though a little dry, and I had to limit myself to just a couple nibbles, as these were pretty decent-sized. That’s one thing you’ll never hear complained about at this event–samples are always generous. 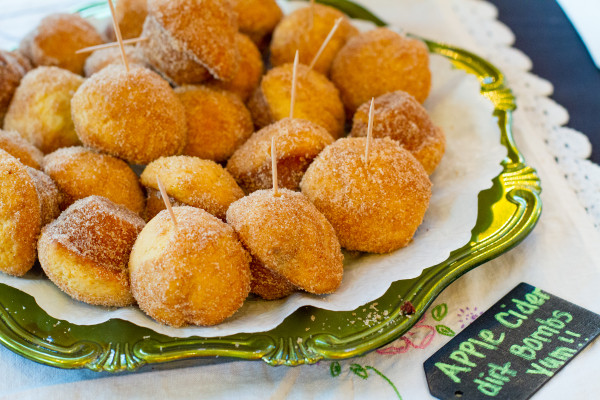 Popover Café and Bakery was my next destination. While they are right across the street from where I work, I somehow have not managed to wander in to their establishment yet. I will have to remedy this soon! Their towers of cupcakes were mesmerizing. Especially the sugar crafting on top of them–jewels in the crowns. They also had iced coffee, but that went FAST. A smart move to keep ones energy up in order to make the most of the event! 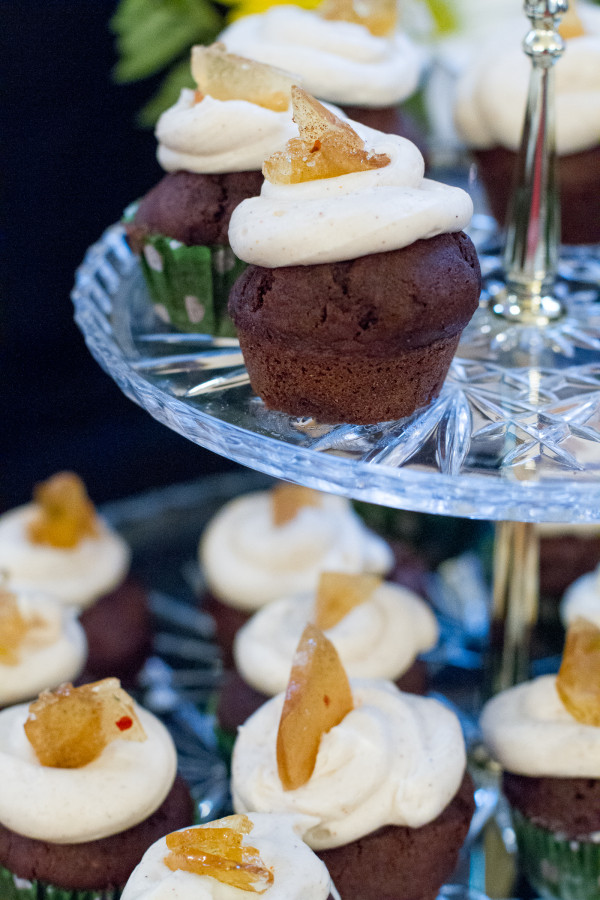 I ended up tasting the Ancho chili and cocoa cupcake with ganache and sweet cinnamon-cayenne buttercream. The cake itself was dry, but overall, I really liked the flavors. A really inventive offering for the day! 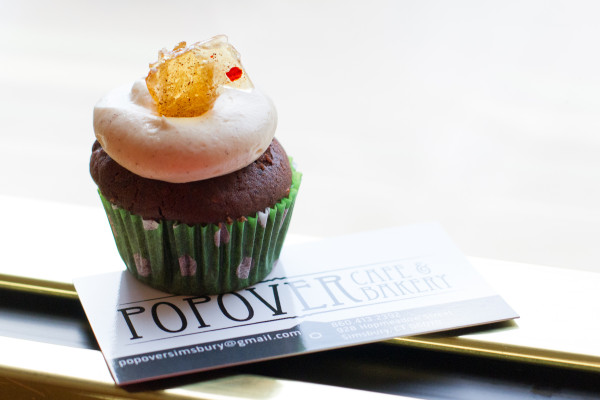 J. Foster’s brought the ice cream and they did not disappoint! You’ll remember that last year their Graham Central Station captured my heart. I changed things up a bit with their Blackberry Cabernet Sorbet and was thrilled by it. Not only was it a fabulous palate cleanser, but it was a divine pleasure to savor. Just enough to be satisfied and move on. 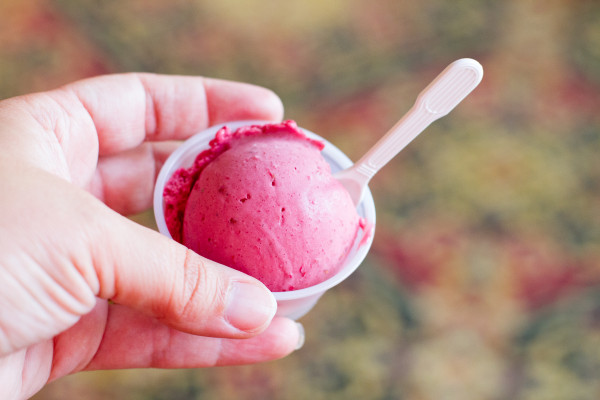 Another table had a long line forming, so I checked it out to see what the hub-bub was about. Matthew’s Restaurant from Unionville was the source of the buzz, where he was steaming PEI mussels with bell peppers and andouille sausage and then using a special apparatus to infuse applewood smoke into them. The smell was intoxicating. I patiently watched as he prepared all this under many watchful eyes, explaining the steps as he carried them out. Remember, I’m not a seafood person. I mentioned that I was hoping to photograph what they were making and the chef prepared a special plate for me, insisting I not grab one of the bowls every one else clamored for. What I received could only be described as beautiful. And so, after I finished my captures, I was left with no choice but to eat it–it was too good to waste. And in those quick few bites I found my favorite meal of the night, the one that I voted for as best dish. A true surprise! So many wonderful flavors working together in harmony, accentuating each other. And the aroma–ah… Truly the best. 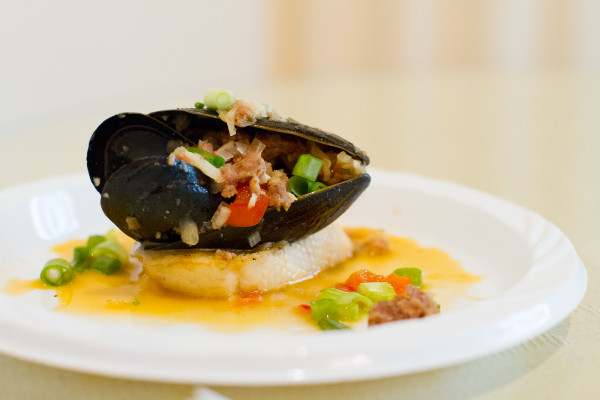 Last year, Rizzuto’s Restaurant and Bar impressed me with their cavatelli and Bolognese with ricotta prepared as you waited. This year, they served up a martini that had too strong of a bite and goat cheese ravioli that was the consistency of Chef Boy R. Dee. Which made me really sad because I really like them. It must have been an off night. I won’t hold this against them. 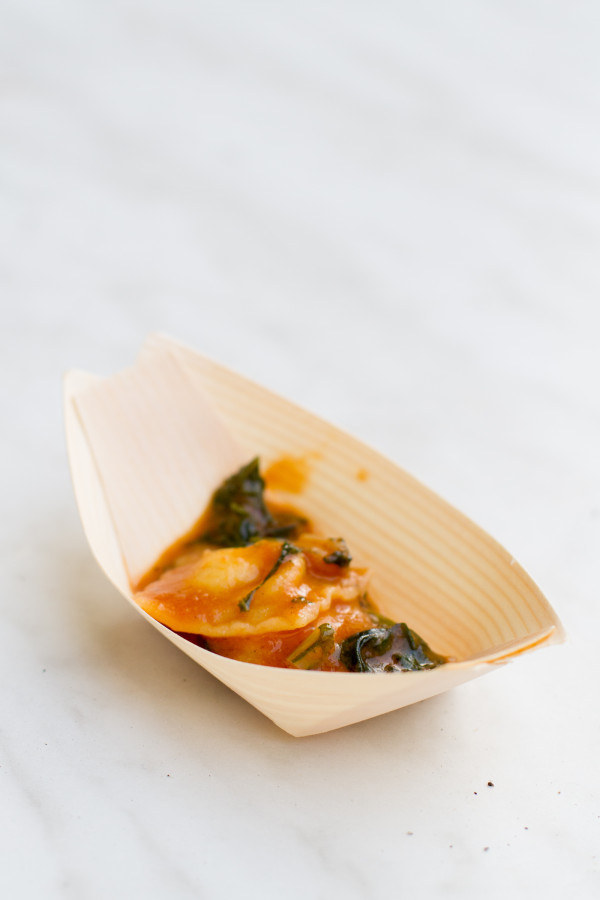 I would have been amiss to pass by my favorite lunch spot, Plan B Burger Bar! I actually started the night with their corn salad and a bourbon strawberry lemonade: 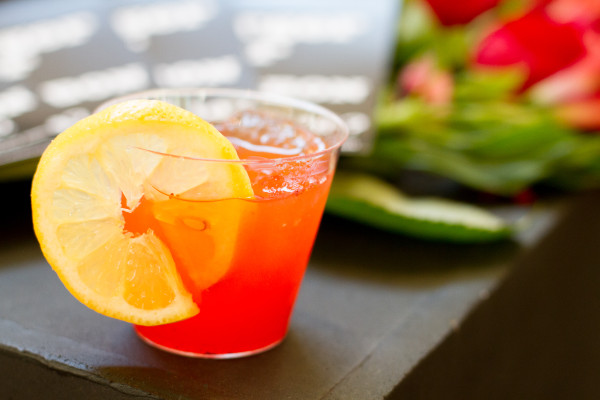 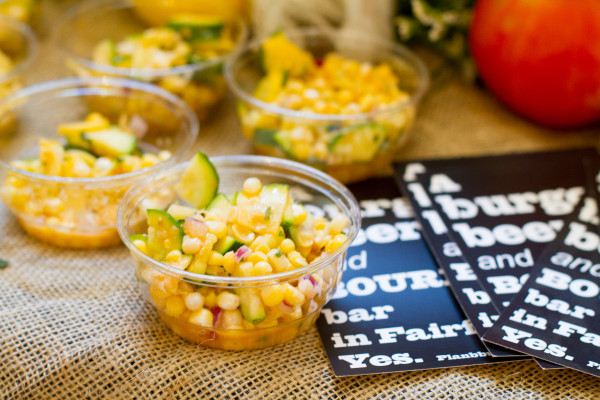 I went back later in the night for one of their mini cheeseburgers. Another example of simplicity at its best, with just fantastic beef and cheese–no need for ketchup or anything else. Pure bliss. 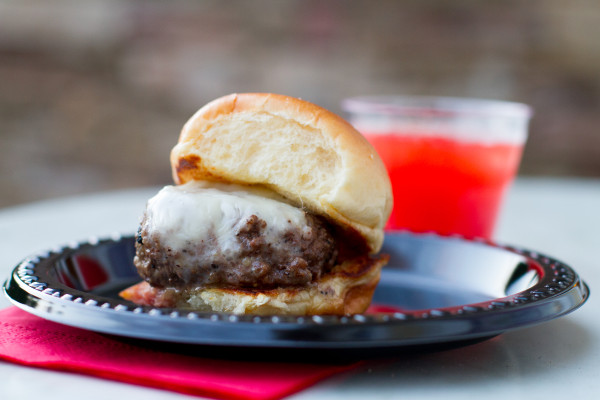 Before attending A Taste in Simsbury, we talked about the ceviche on the menu. My first–and only–experience with ceviche was in Miami when I attended BlogHer Food (and went on the South Beach food tour). It was another pleasant seafood surprise in that I found it bright and quite delightful. Season’s Restaurant at Avon Old Farms had a ceviche offering, too, described as “seafood ceviche salad: tubes and tentacles of calamari, bay scallops, shrimp seasoned with cilantro and sherry vinegar dressing.” Tubes and tentacles? We were told that they asked that this distinction explicitly be made in the tasting menu. I wasn’t sure I was up to this challenge. I walked up to the table and found they were serving them shooter style in little edible cups–some spicy, the rest mild. I took a deep breath and grabbed a mild one, then walked it across the room where I could photograph it. I couldn’t contemplate it long–I wasn’t sure I could keep up the nerve to try this odd assortment of sea creatures. Then I popped the whole thing in my mouth and went for it. And immediately wished I had thought ahead to have a drink ready. It was a mouth full of chewiness with a teeny bit of crunch from the edible cup. It didn’t taste like much, but the texture–damn you, texture–did me in. This is a big reason why I have problems with seafood. I had to chew fast and swallow it down. Then I rushed over to The Wine House for a sample of Merlot–to cover it up as completely as possible. I’m glad I tried it. And really, I’m not knocking it. But it was a huge messing with my mind to try it in the first place, and I was not converted. It wasn’t for me. 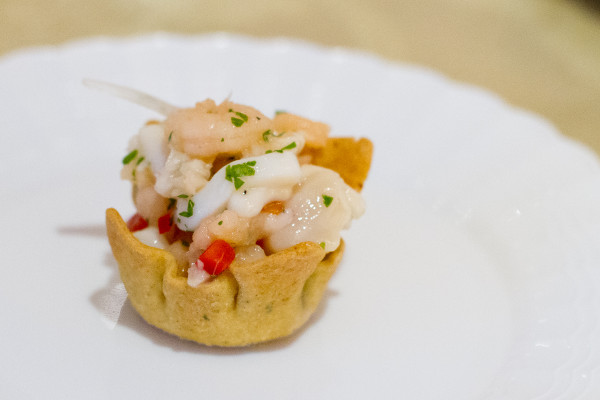 As I walked out to my car at the end of the evening–the sun already set, the stars beginning to twinkle–I was satisfied. Not only in the belly, but in the spirit, as well. It’s a truly wonderful thing to know there is so much good food right there in your backyard. Now, to explore more of it. I have some pretty good ideas where to start…