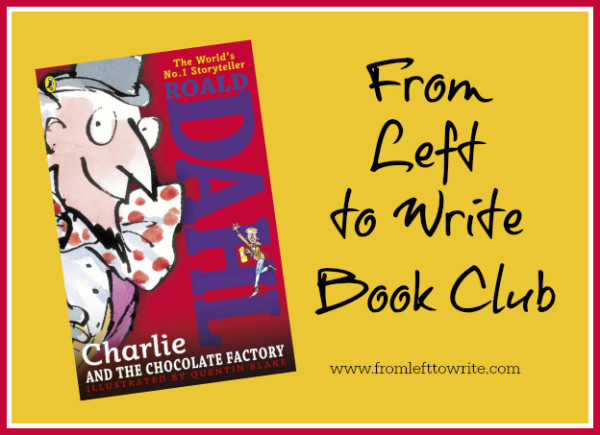 by Roald Dahl, which celebrates its 50th anniversary this year. In honor of this occasion, Penguin Young Readers Group, in partnership with Dylan’s Candy Bar, the world-famous candy emporium, and First Book, a nonprofit social enterprise that provides books for children from low-income families, is launching a year-long international celebration.

Head over to From Left to Write to learn how you and your child can have a chance to win the Golden Ticket Sweepstakes, where the grand prize is a magical trip to New York City, plus much more! For every entry submitted, Penguin Young Readers Group will make a donation to First Book. Then, join From Left to Write on July 24 as we discuss Charlie and the Chocolate Factory. As a book club member, I received a copy of the book for review purposes.

I didn’t read Charlie and the Chocolate Factory until I was an adult. In fact, it took the release of the Tim Burton film to intrigue me enough to pick up the book. I always loved Willy Wonka and the Chocolate Factory, and watched it many times, both as a child and an adult. But I had no clue that it diverged so much from Roald Dahl’s narrative–not until I was nearly 30 years old and took in Johnny Depp’s … eccentric portrayal of Willy, himself. Granted, the character is one who is rather eccentric, shutting himself up in a factory with a jungle’s-worth of Oompa-Loompas and tormenting bratty little kids, but it all seemed a bit over-the-top when compared to Gene Wilder’s version of the same character.

Lo and behold, I discovered the difference.

I wish I had read Charlie and the Chocolate Factory when I was a child so I would have lovely memories to draw upon right now. As an adult, it’s much different. Still enjoyable, but tainted too much by what I’ve seen on the television screen (and you can just imagine what Willy and his Oompa-Loompas would have to say about that!). Instead of imagining for myself what wonders await the children, I find myself comparing film versions for which I like best, cherry-picking others’ visions to create my own. The horror!

Reading it a second time for the book club made a difference. Reading it with my daughter will be even better.

And I find myself wondering now about our television consumption: not only how it colors our views of the world, but also how it ruins them. Perhaps it’s time to remove the TV set and replace it with a bookcase, after all…

How old were you when you read Charlie and the Chocolate Factory? What fond memories do you have of the experience?