Disclosure: I was given a complimentary South Beach Food Tour in exchange for this post. All opinions and photos remain my own. Thank you for supporting the brands that help make this blog possible.

While I was in Miami for BlogHer Food, I insisted upon getting outside of the conference to explore the area. First on my list was a South Beach Food Tour, given by Miami Culinary Tours. In fact, this was the very first thing I did in Miami, after dropping my bags off at the hotel. And good thing, too, because I had been up since 2AM with no real sustenance to carry me over!

I met up with Rachel of The Stay At Home Chef and we embarked on this adventure together. After a bit of a bus mix-up (which we straightened out, no problem), we arrived at the predetermined location and our guide, Mirka Harris, gave us instructions to proceed to the first stop on the tour: Bolívar.

Bolívar claims to be the best Colombian restaurant in Miami Beach. I can see why! This cozy little bar and eatery hides behind a modest exterior–you have no idea until you enter that you’ll be transported to a foreign cafe. Colorful bottles line up behind the bar and there’s an atrium that lights up at night. Wine is everywhere. I loved it! 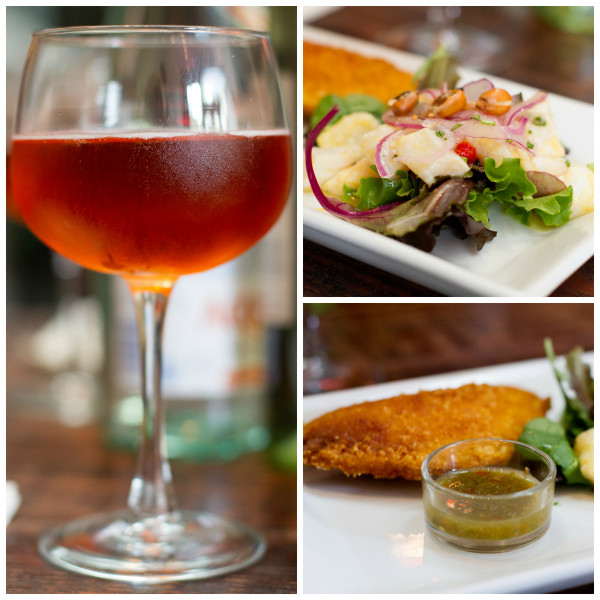 Once the whole group was assembled, we sat at tables of four to begin our sampling. First was a beverage made from Colombiana La Nuestra soda and Aguila beer (Refajo Colombiano). It was light and refreshing and definitely not too sweet. A perfect summer drink! Then the tasting plates came out with white fish ceviche and the best looking empanadas I have ever seen. I don’t normally eat fish, but when in Miami… Ceviche must be prepared fresh, as the fish is not cooked. It is instead marinated in citrus juice (much like a real key lime pie is “cooked”) for the absolute freshest taste. You need to be careful that you order this dish somewhere where the fish is nearby, to reduce your risk of food poisoning. We were in luck at Bolivar and the ceviche was fantastic. Acidic and certainly not fishy tasting at all (thank goodness, as that’s a sign of bad fish) with a touch of passionfruit. The empanada it was paired with was corn-crusted and filled with sweet potato and beef, served with a habañero sauce. OH.MY.GOD. If I only ate those for the rest of my life, I would be a happy girl. Nothing at all like the empanadas I’ve made or eaten before, these were divine. The sauce had just the right amount of heat without being overpowering. I wish I had had a chance to get back to Bolívar before my trip was over. 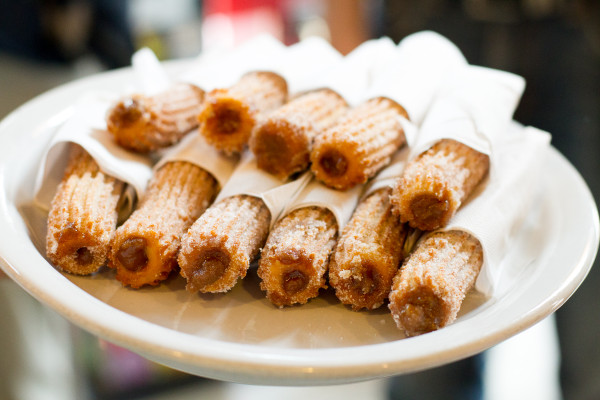 Our next stop was just a couple doors down at Manolo. If you check out their website, you’ll see they list more locations in Argentina than the US–this is the real deal. While we were ready to salivate over the display of desserts in the case, a special treat was procured for us: a platter of the most delectable churros rellenos I have ever seen. Stuffed with dulce de leche, they quickly became what I want my last meal on Earth to be. (Take note!) We tenderly grasped our churros and bit down into Heaven in a stick. Sandy cinnamon sugar coated our lips as we bit down again to relish the next mouthful. Our guide was ready to move on, but I didn’t want to rush the experience–this was, hands down, the best thing I’ve ever put in my mouth. 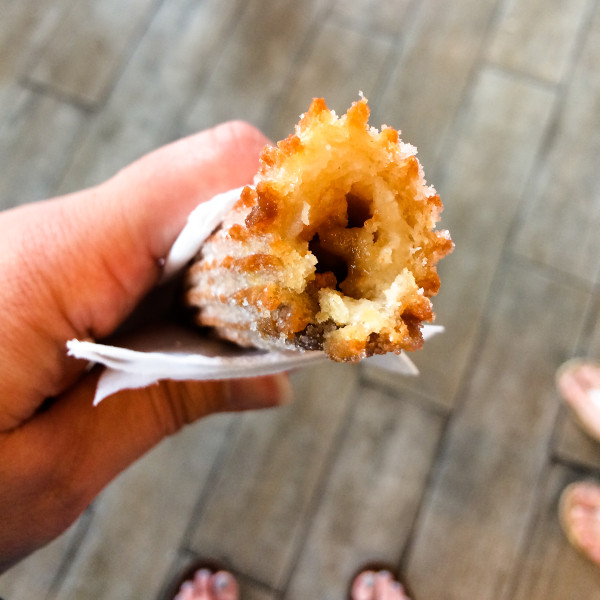 We had a bit of a walk until our next stop, but that was filled with fun facts about the architecture (very Art Deco, especially along Ocean Drive) and old mob stories. We paused at the Versace mansion and our group expanded a bit–I guess others couldn’t resist the draw of the story being weaved in our presence.

And then we arrived at The Tides. Or, as I’d like to call it, my future home. With the cozy “mommy chairs,” as I’ve dubbed them (as in, you can’t see mommy right now tucked into this little alcove of her own, so give her 10 minutes of peace, please!) and classy 50 shades of beige decor, this is where I imagine I would go hang out when I someday strike it rich. Even the restroom was swanky! But we weren’t there to take a potty break–nope, we were there for fresh mango margaritas. 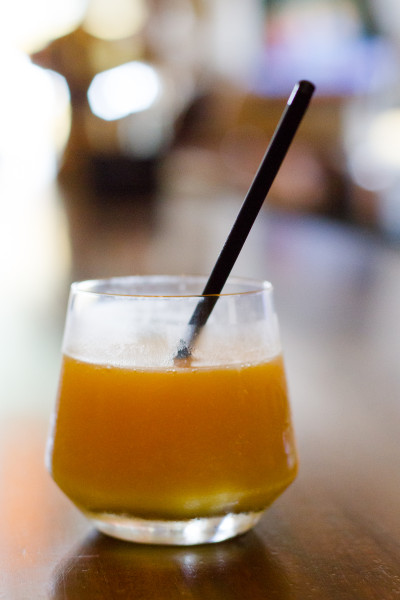 mango margarita at The Tides

Our bartender prepared them by the blender-full as we watched on. Then we each grabbed a drink, sipping up this sunshine in a glass. (Perfect since this wasn’t too long before the thunderstorms and tornado watch that came later in the day…) I could see myself seated at a table in the corner, notebook out and chewing on a pen aimlessly, jotting down notes that would become the best poetry of my life. Or just getting sloshed on mango margaritas. Whichever. There was no time for such pursuits now, however… 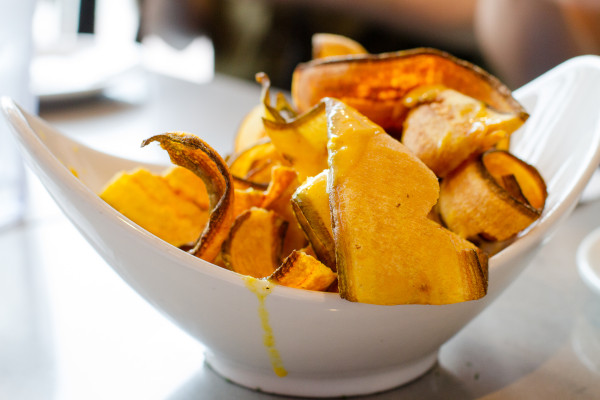 We skedaddled over to Restaurante Polo Norte on Washington Avenue, which was literally in the middle of a name change (seriously–the letters had been removed from the building that very morning!). This had more of a diner feel than the other establishments we had visited, but we were assured that the food was phenomenal. Waiting on the table were Mariquitas con Mojo, bowls of fried plantains drizzled with “mojito,” a garlic sauce. Each of us then received half of a Pan con Lechon, which is a Mojo-roasted pork sandwich topped with sauteed onions. It was here that I learned that I was meant to eat Cuban cuisine–heavy on the pork and starch. Just my kind of eatin’! 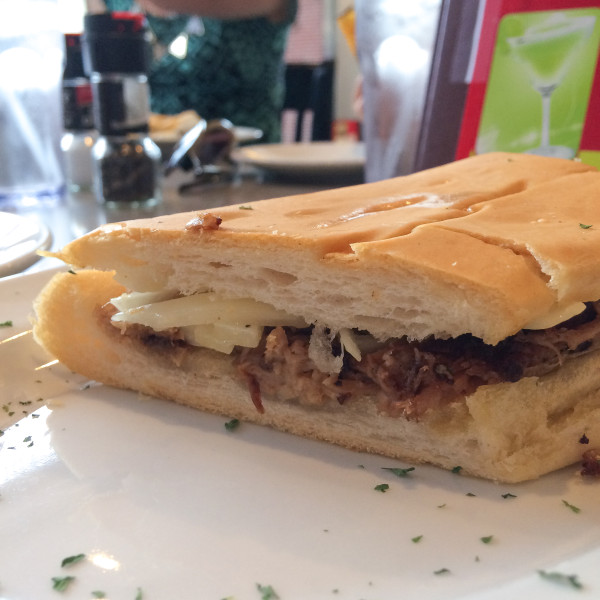 Blocks Pizza Deli was the next stop and I was a little surprised we were stopping for pizza. I mean, c’mon, I’m from Connecticut–we have fabulous pizza covered here! The claim to fame at Blocks is that they use a mother dough (sourdough) that’s been kept alive for a few hundred years. No refrigeration, no freezing, just fresh, fresh, fresh ingredients! I remained skeptical. Then came the tray of Sun Dried Hippie Blocks Pockets: sun-dried tomatoes, feta, baby spinach, basil pesto, and kalamata olives. Wow. I can’t recall eating anything like this at home! This Greek-y combination of flavors is a favorite of mine, but I hadn’t thought to stuff them in a pizza pocket before. That will definitely change in the future! (Neat little tidbit: next door to Blocks Pizza Deli is the complex where Ace Ventura lives in the movie.) 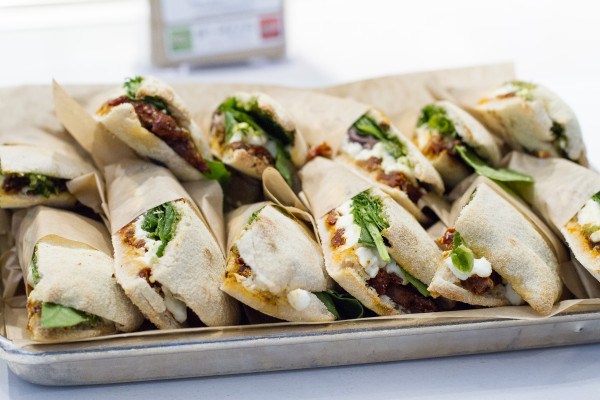 Miami truly is a melding of flavors, never more evident than when we entered the pedestrian village on Española Way and were greeted with Cuban and Mexican restaurants and a gelato shop. The gelato shop–Milani Gelateria–was equipped with the coolest piece of kitchen equipment I’ve ever seen. A variety of gelato flavors spin around on a carousel, tempting your taste buds. 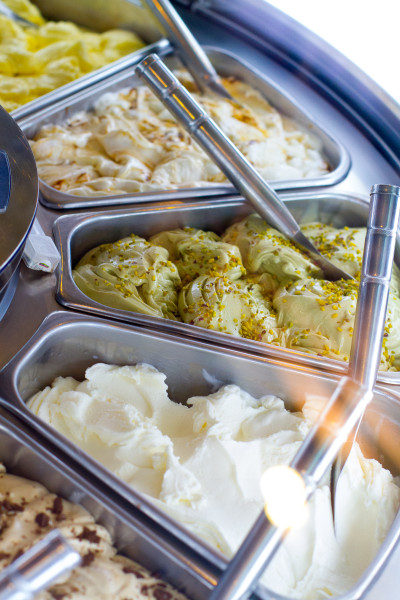 Which flavor do I get? I sampled the Nutella (can’t get much more Italian than hazelnut+chocolate!) and Cream Caramel. Divine! Gelato is kept at a lower temperature than ice cream, which gives it that distinct texture. The only problem is that it’s really hard to eat with a tiny tasting spoon before it melts! 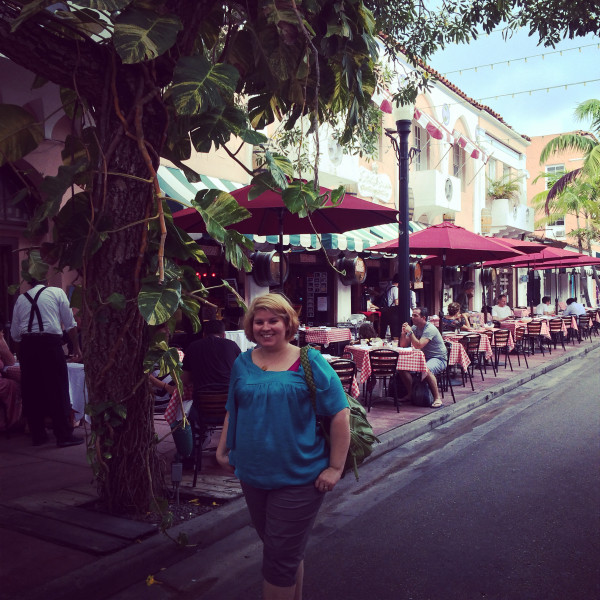 We posed for photos on Española Way, then proceeded on to the last stop–a little grocery store. Not what you’d expect to be part of a culinary tour–what treasure could possibly be present beyond these ho-hum doors? 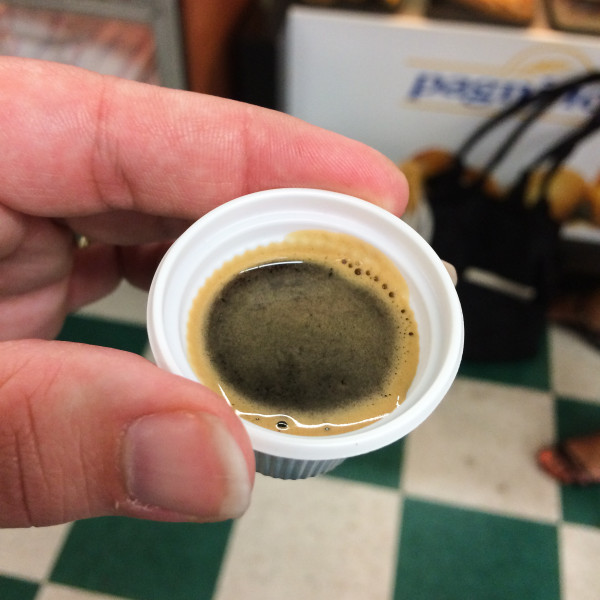 And then I was introduced to Cuban coffee. Before arriving in Miami, there was a lot of discussion in the BlogHer Food group about how we simply MUST try Cuban coffee. That we would be fools to drink Starbucks while we were there. There was even a tutorial written on how to order it. I vaguely recalled the rules, and something seemed familiar when our guide ordered a colada (like piña colada, only not as much fun), but I didn’t remember the specifics. Apparently, you order a colada to share with friends. It doesn’t look like much–heck, it’s about the size of a typical Styrofoam coffee cup with a stack of thimble-type plastic cups on top–but this is what you drink if you are native. I love coffee. I love espresso. But I did not love Cuban coffee. It was sickeningly sweet and very strong and I was not a fan. I took a second shot, just in case I missed something the first time around, and I still was not a fan. I’m glad I tried it–I needed to know what the hype was all about–but seeing as I usually drink my coffee and espresso drinks without any sugar, this was way too much for my palate.

Closing thoughts: If you will be in the Miami area, I highly recommend booking with Miami Culinary Tours. Not only do they have the South Beach tasting that I did, but there are also tours in Little Havana, Whynnwood, and a cocktail tour, too (why didn’t I book that one?!). What do you get out of it? An idea of the flavors of the area and a little more knowledge about the history. Plus it was fun. If I return to Miami, I will definitely be checking out one of the other tours offered by Miami Culinary Tours.