I know there’s been a bit of an echo here during the last week and I apologize. It just happened to be one of those weeks when the joy in life was sucked right out of me and I was barely treading water to keep my head from submerging. I had no energy left for anything else.

I should have been happy. The seven months of dealing with my now-properly-deemed lemon of a new car are coming to a close. We received the repurchase agreement, signed and submitted it, and are simply waiting for the third party company to find time in their schedule for me to surrender possession of the car to them. But the thought of having to start all over with purchasing another new car is exhausting. I didn’t plan on doing this for at least 6 years. And every time I read reviews online, I’m disheartened by all the complaints across the board. There is no guarantee the next car won’t have problems, too, and that may just break me. 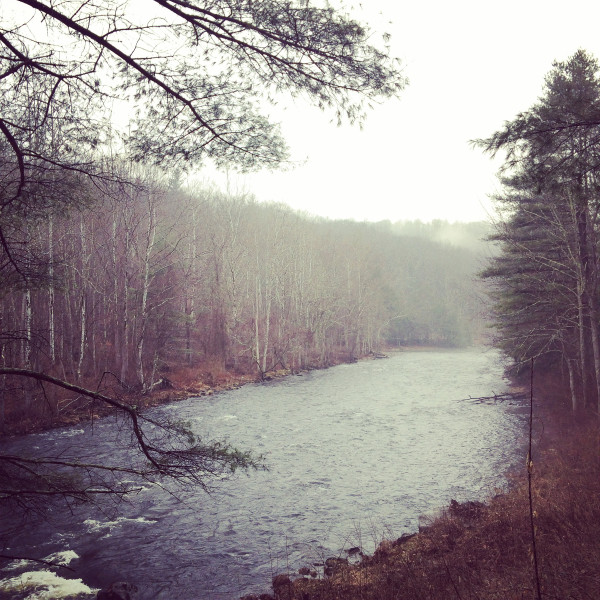 Friday night was the culmination of the suckage. I had loose plans to go out with a friend that ended up being canceled before I left work. I had built up the evening so much in my mind that the cancellation was a huge blow. It wasn’t the case, but it felt like utter rejection, and I couldn’t stand being rejected yet again. I went for a long drive (in my lemon) in the rain, eventually happening upon People’s State Forest. I parked the car and watched the rain fall as I chewed on a hunk of Asiago bread from Panera. What can I say? I find comfort in carbs. Then I dragged myself out into the drizzle. I wasn’t attired for this at all, in my holey-crocheted cropped sweater, no rain coat, and flats that make my unstable ankle wobblier than usual. Still, I strutted across the field. I was drawn to the river. I had to see it.

By the river, not much was different. The water level was high and it rushed by with great force. The pines surrounded me, not quite blocking the rain that was falling more heavily now. The weather suited my mood quite nicely. I took a selfie and posted it to Instagram, if for no other reason than to show where I was. I have this morbid obsession with establishing where I am when I’m out alone so my path can be recreated should something happen. I watch too many crime shows. 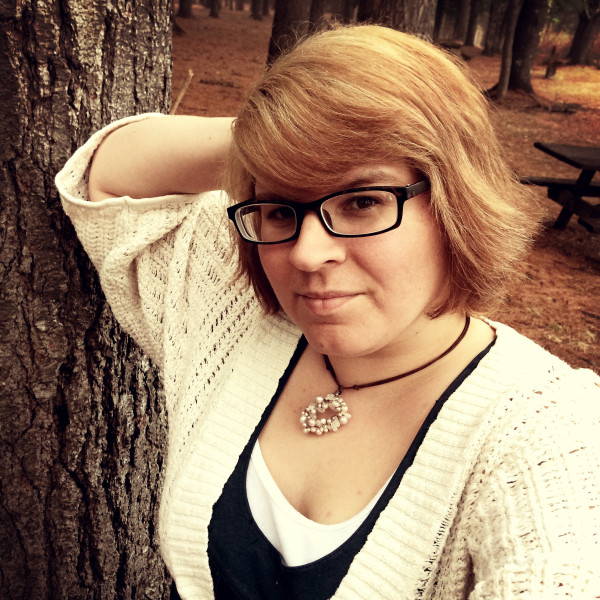 My mood was not improved, but the quiet felt comforting. I could disappear in the immenseness here, evaporate from existence. In the forest, the little things don’t matter.

In spite of being ill-prepared for a hike, I made my shaky way down the path to the river’s edge and found a beach. The mist in the distance was swirling in as the sky darkened. It was as if I was controlling the scene subconsciously. And it was absolutely beautiful. 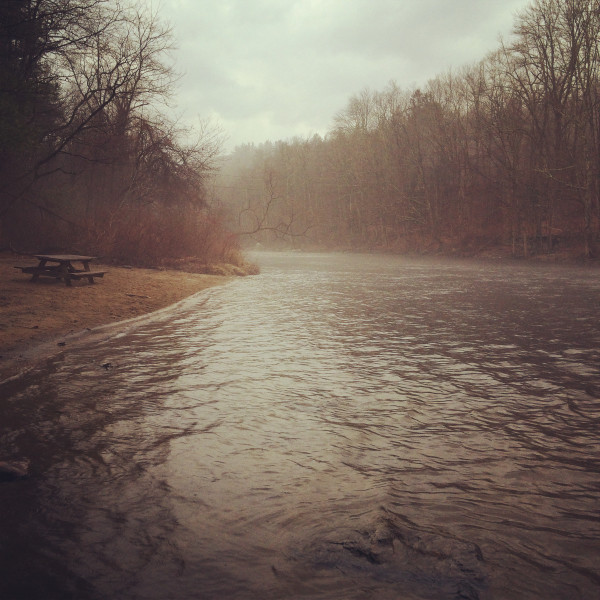 The rain started coming down harder and I was growing colder. I returned to the car just as humans proved to still exist. My peace was shattered.

Friday night, I returned home and slept for 12 hours.

Saturday I watched my nephew. I took the kids to an Easter egg hunt that was over before it even started. A false start couldn’t be stopped and the kids took over the field as the Parks crew looked on in defeat. My nephew didn’t mind–he didn’t seem to know what was going on anyway. My kids made the best of it. Nobody was really disappointed, but it seemed like a perfect metaphor for my life–left behind as everyone surges forward. 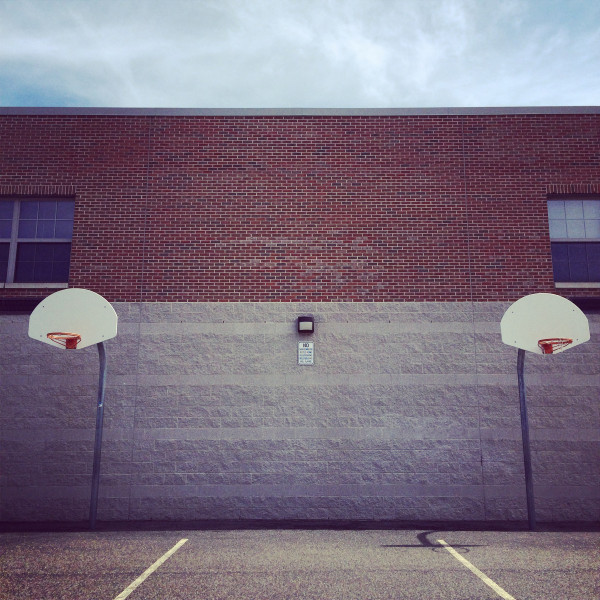 Saturday afternoon I felt exhausted again. I should have been outside enjoying the sunshine and warm temps. Instead, I curled up on the couch, hiding under a blanket, shutting out the world. I napped for at least 2 hours.

Sleep doesn’t make the world go away, though.

My husband insisted I go out Saturday night. I would be alone–as I often am when I go out–which is a mixed blessing. I can do what I want, when I want–I am in control of my destiny. But it gets lonely, and I grow tired of fiddling with my phone before events start so that I look like I belong. Or like I’m waiting for someone to show, instead of being that loser girl all by herself again. I wasn’t sure I had it in me to take on another event alone, even though I had been looking forward to it.

In the end, he won. I showered, dressed, and headed out.

The night began much the way I described. I awkwardly selected a chair in the corner, alone and yet accidentally in a patch of light where I couldn’t hide. I felt exposed. And I was terrified. I knew an old friend would be at this event, but we hadn’t spoken in almost four years. The last time we did speak, I was on a path of self-destruction and tried to drag him along with me. There wasn’t enough vodka in my smoothie to muster the courage I was pretending to have.

And then, what I feared most happened: he talked to me. And it wasn’t to kick me out. Somehow, the tension of these past few years was broken, in an instant, and it was over. It no longer was there to hang over my head, and I was free to enjoy myself. Or, at least try. 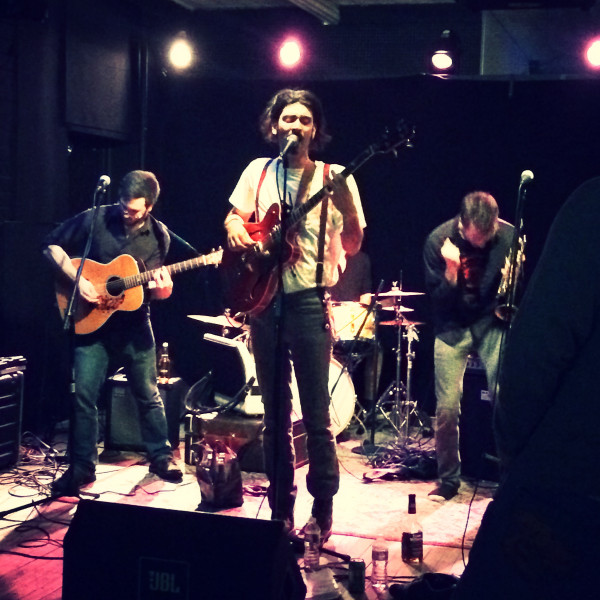 Free. As free as one can be when she lives in the same town where she grew up. At least I was mostly anonymous in that crowd.

Slowly, the music I had been looking forward to hearing lured me out of my shell. I bopped a little in time to it, despite my complete lack of rhythm. By the time the second band came on, I was much looser and even accepted the outstretched arm of one of the more passionate patrons, overcoming the fear of tripping over my gimp left foot as I pranced across the floor with him. It didn’t matter that I didn’t know this guy. In fact, that probably helped. I was having fun.

At the end of the night, I was sweaty and tired, but in a good way. I didn’t feel quite so drained anymore. My cup was starting to fill up again. I’m still working on getting it to half full. At least I’m heading in the right direction now.