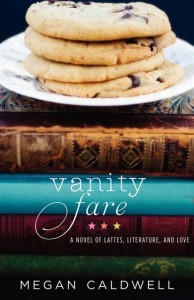 As Emeril’s #SeriousSandwich came to a close, William Morrow Cookbooks threw in a little bonus gift for all participants: an uncorrected proof of a soon-to-be released food-centric novel: Vanity Fare: A novel of lattes, literature, and love by Megan Caldwell. Not only did I get to partake in the deliciousness that was #SeriousSandwich, but I was able to feed my mind, too–a winning combination!

Vanity Fare is the story of Molly Hagan, a woman in transition. Her husband has recently left her–and their six-year-old son–for a younger woman, flipping her world upside down. Like many mothers, Molly had sacrificed her career for her family, and now she’s left floundering, unsure how she will keep afloat. When her mother admits she’s having financial troubles as well and comes to stay with Molly indefinitely, this former side dish must take on the entree roll (ha!) and carry the meal for everyone.

Vanity Fare is a delight if you love corny puns, for Molly is full of them. Stretching her wings in a more demanding assignment copywriting for a celebrity chef’s latest venture–a book-themed bakery in the heart of New York City–Molly finds not only that she can stand on her own two feet without her betraying, soon-to-be-ex-husband, but that she can love again, as well.

Yeah, it’s a fluffy kind of read, though you get bonus points for recognizing where the puns originated–and some of them are more difficult than you’d think. It’s also pretty easy to guess early on that Molly will gain the confidence she needs to move forward, that she will kick her ex to the curb, and she won’t become a crazy old cat lady. That’s kind of the point of books like this. Despite the lack of suspense, I enjoyed Vanity Fare. I don’t delve into chick lit often, but I found Molly endearing; I could relate too well to her and found myself cheering for her, reveling in her victories. Go, Molly! Go, Molly! You can do it!

Vanity Fare was released December 26, 2012. It is now available for purchase nationwide.

Disclosure: The views and opinions expressed on this blog are mine alone, based upon my personal experience. While I received a complimentary copy of Vanity Fare from William Morrow, an Imprint of Harper Collins Publishers, which was used to write this review, there was no requirement for a positive review.