I’ve always lived in Connecticut. In fact, I’ve spent all but 8 months of my life living in the same small city where I was born. Some may consider this limiting, having never really left your hometown that so many were willing to run as quickly and as far as possible from–I call it having roots. I love sharing my city with my kids. And they love re-discovering my city with me.

New Englanders are known for talking about weather. We’re all amateur meteorologists, speculating about what will come from the sky next about as frequently as others may discuss sports games or television. Then again, if you wait five minutes, it’s bound to change anyway. Somehow, even though this has been happening our whole lives, we’re all befuddled together when it happens… and the conversation continues, a vicious cycle from which none of us can manage to break free. 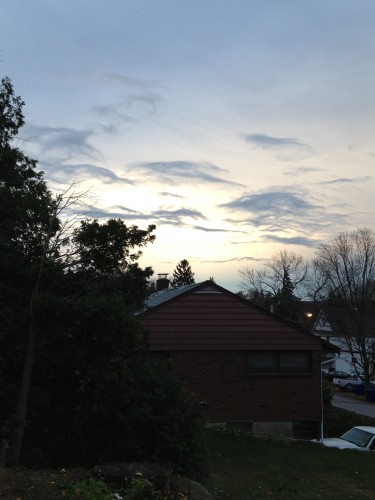 Last week, we had superstorm Sandy. (I only just learned yesterday that it’s being called superstorm… is this the SuperStar of the weather world?) Wednesday, we had our first snow storm of the season, dumping on rush hour roads and driveways everywhere, before mostly melting Thursday. But only after I shoveled the driveway. Twice. I shouldn’t be surprised, but the timing was pretty lousy, especially for the victims of superstorm Sandy.

Before my husband left for his work trip, we tried getting all our ducks in a row. Somehow, some things got away from us, though. Like the lawn furniture, which I lugged down the stairs and into the garage that Sunday morning, just after dropping him off at 6:15 AM to catch his ride to the airport. Nevermind the fact that I’m not supposed to be doing any heavy lifting–it had to be done before Sandy came through and turned the yard stuff into an arsenal of projectiles.

Then there was the main brakeline busting on my 14-year-old truck this past Sunday, just after the incident at BJ’s. Press brake pedal–no pressure–pull into the first parking lot you find and bawl your eyes out. Proceed to call husband on the other side of the world, who is 12 hours ahead, time zone-wise, and sob nonsense into the phone, despite the fact that he isn’t exactly awake on the other side. Thank goodness for family and their assistance here at home to help me get through that emotional storm!

When the snow storm was announced, however, I just about lost it with Mother Nature’s guessing game. I was in no mood for her moodiness given how the preceding week had been. Before my husband left, I asked about the snow blower, which is currently resting at my father-in-law’s house. I mentioned the vehicles not being ready for winter roads, lacking winter tires (and the Blazer lacking 4-wheel-drive altogether!). I expressed concern about having to shovel the driveway by myself (something else I’m not really supposed to do; darn back injury). My worries were brushed away like crumbs on your lap when you’re downing a greasy fast food burger in your car on your way back to work, late from your lunch break–no time for this. No need to worry. It would be early November: snow would not be a problem. 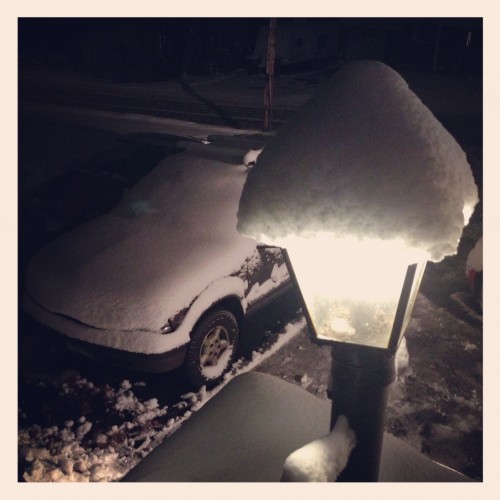 It’s pretty. And evanescent (though hanging on somewhat, since there was another flurry Thursday night during my drive home–and subsequent stop to pick up 50 pounds of ice melt at BJ’s). But by the time the kids are supposed to play their last soccer games on Saturday, it should be gone, and we’ll be back to Fall weather. Until the next freak snow storm.

Stick around a little while… it’s sure to change. At least my husband will be back to face it with me, a team once again.