One of the things I really like about  Emeril’s Kicked-Up Sandwiches is that it covers just about any time of day, any possible meal, all in one book. You wouldn’t typically think of sandwiches for dessert but, as I’ve already demonstrated, Red Velvet Whoopie Pies fit the criteria nicely (and are pretty darn good, too!). Today I’m looking at breakfast sandwiches. In particular, Mascarpone and Marmalade-Stuffed French Toast. 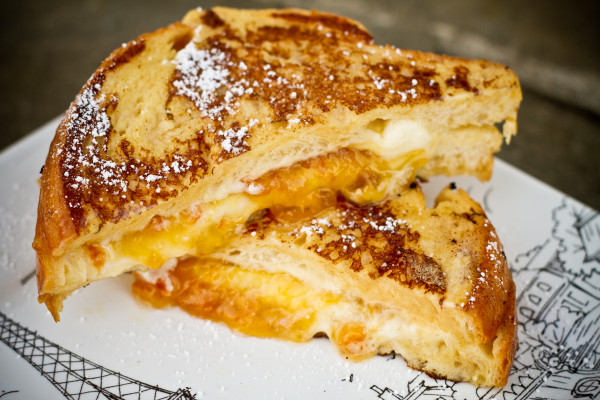 French toast is an old stand-by for breakfast and brunch–just about everyone knows how to make it in its most basic form. Emeril kicks it up a notch by adding a good smear of mascarpone and orange marmalade between two slices of decadent Brioche before dipping it into a spice-rich, orangey custard base and then frying in a hot pan. My knees are weak just thinking about it! 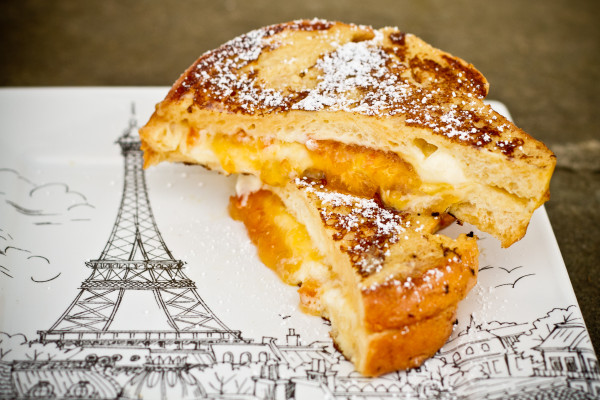 I chose to use store-bought Brioche, which saved me a lot of time. Breakfast was served for the entire family in less than ten minutes, yet it tasted like something I slaved over. In fact, the first time I made this, I managed to dish it out just before leaving for the day to go to work. I’d like to think my family appreciated that little something extra on a weekday. If you’re feeling ambitious and want to go all-out, Emeril does offer a recipe for Brioche loaves and buns, making it possible for a fully homemade experience. I was not up to that task this time. 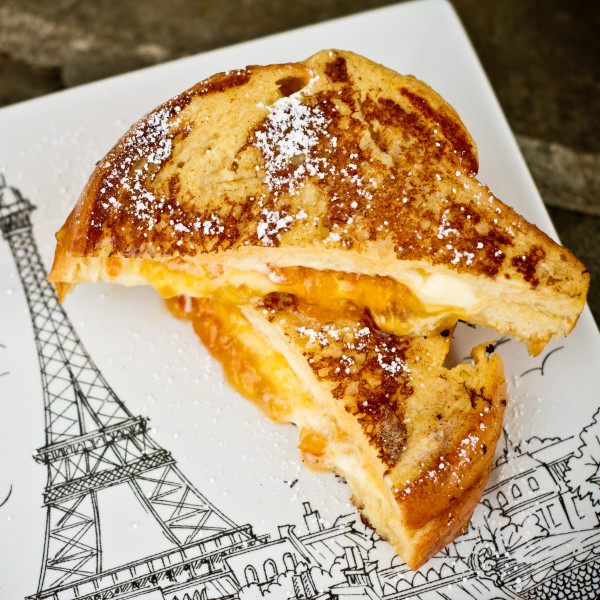 I found that the custard was enough for at least six Mascarpone and Marmalade-Stuffed French Toast sandwiches (you’ll need more mascarpone and marmalade to pull that off, but there should be plenty left if you bought them just for this recipe). I stored the leftover custard in an air-tight container in the fridge until the next day. Leftover sandwiches themselves (if you have any!) can be reheated quite nicely in the toaster oven. I’m thinking this would be great for cooking up a big batch on a Sunday and then using the leftovers for quick grab-and-go breakfasts the rest of the week, where you could just eat them like they’re grilled cheese sandwiches. No maple syrup necessary. 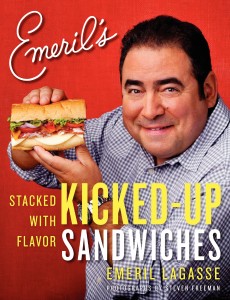 Emeril’s Kicked-Up Sandwiches will be available for purchase on October 16, 2012. If you just can’t wait, you can also pre-order it here.

Disclosure: The views and opinions expressed on this blog are mine alone, based upon my personal experience. Morrow Cookbooks provided me with a Cookalong Kit including an advance copy of Emeril’s Kicked-Up Sandwiches. In addition, upon completion of the #SeriousSandwich cookalong, all participants will receive a small grocery reimbursement and a complete library of Emeril Cookbooks.