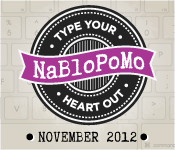 The front porch light is off, the kids nestled in their beds, already transitioning to the next big holiday. It doesn’t last long, not even the glow of Halloween night and the sugar rushing through their veins. It’s time to look forward.

When I first transitioned from a blog about nothing (that was nowhere near as successful as the show about nothing) to a food blog, it was mainly to catalog what I had made and share it with whomever was interested (which wasn’t very many people at first, but that’s how beginnings are). Since then, I’ve tried to challenge myself over and over again. Take better photos. Prepare more complicated recipes. And now, I’m taking on the most difficult challenge yet: NaBloPoMo.

I know what you’re thinking. What the heck is NaBloPoMo, Carrie? Is that like NAMBLA? I can definitively respond that no, it is nothing like NAMBLA, thankyouverymuch. NaBloPoMo=National Blog Posting Month, a much more benign entity that encourages bloggers to write more, thereby improving their writing skills and aiding their blogging skills by setting up some consistency. It’s really a very good thing.

The world turned a bit surreal in the last month when I was interviewed by The Litchfield County Times about my #SeriousSandwich project with Morrow Cookbooks celebrating the release of Emeril’s Kicked-Up Sandwiches. But it brought back some memories, too, as I was forced to think back on the inception of this blog and what it meant to me. Not when I started baking Christmas cookies in December 2010–further than that. In September 2010, when I had just reawakened the creative side of myself after a too-long slumber and needed somewhere to go with it. Instead of waiting for something to happen someday, I was going to do it today. Write for the sake of writing. Live for the sake of living. And rediscover the girl I used to be.

Alright, that is sappy. But for years I had been saying that I wanted to be a published author… and then I didn’t write. I had no time. I worked full time. I went to school. I had kids. I went back to school. And in my last year of college, at the ripe old age of 33, it finally clicked–what had been missing from the equation. It suddenly all made sense. If you want to write, write. Don’t wait for someday. Just do it. Today.

So I wrote. Nobody read it, but I wrote anyway. And I took a Creative Writing course. And I became obsessed with Shakespeare, hanging on an extra semester so I could take one more Shakespeare course, even though I could have graduated. And I signed up for a screenwriting workshop, something I had never considered before. The ball was beginning to roll.

I still struggle with finding the time to write. Who doesn’t? Commuting, working full time, two kids (who have soccer three days a week between them), and a husband… and this is our slow season! But a blog is manageable. A blog is safe. And I can find the time to bake, take photos, and write for that because it feeds my soul at the same time. I am a published author, just not in the manner I originally envisioned.

NaBloPoMo is the natural evolution of this. A challenge to post every day for one month. I can do anything for 30 days, right? I can’t guarantee recipes every day–in fact, I know there won’t be–but there will be food. And probably some randomness, too. And hopefully a renewal of spirit that I desperately need right now. The timing couldn’t be better.

Welcome to the next journey!