A question of utmost importance came up recently, nagging and nagging for an answer. I couldn’t get it out of my mind. Somebody must know the solution! If not in real life, then out there on the internet, somewhere, this must have been addressed before:

What is the difference between a Congo Bar and a Blondie? 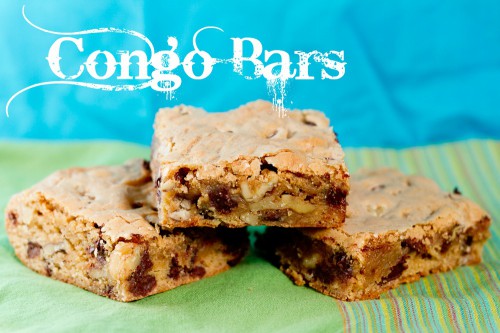 Growing up, my mom wrote her recipes on index cards, only slightly-organized in little plastic and metal treasure boxes. They were loosely sorted by course (Main Dish, Dessert, Breakfast…), but after that, you never knew what you would find. In fact, sometimes, it could take several hours to find exactly what you were looking for if–goodness, no!–it ended up being returned to the wrong category after its last use. This wasn’t the best method, but it’s what she had, and it worked for her for many years.

One treasured recipe in those boxes was for Congo Bars. In fact, it was so treasured, she had it down twice, with only a minor variation in measurement for brown sugar between them. Before I moved out, I copied down my favorites, including both of these, as I could not see a life without Mom’s Congo Bars.

Fast forward many years later, past the widespread acceptance of the internet and newfangled ways to organize recipes, past the several years I didn’t bake while I was losing weight and trying to keep it off, past the days I worked in an office and didn’t bake much, to today. Where I now spend my days pondering which recipe to make next. Where I see infinite varieties, producing infinite varieties, of just about anything imaginable. And where I was introduced to the Blondie.

Blondies were never part of the repertoire as a child. I never even heard that term until a couple years ago when I came across them for the first time on Smitten Kitchen. And ever since then, they’ve been a bit of a nemesis for me. I never seem to be able to get them baked the way I want–you know, not completely underdone in the middle or so overdone that they could be used as hockey pucks. Why are they so elusive to me?

Recently I had a revelation though: aren’t my Mom’s Congo Bars basically just Blondies by another name? Could it be, just maybe, that like the sub, hoagie, grinder, this is just a difference of regional dialect?

I asked on Twitter and received in response that Congo Bars have coconut.

Neither of the recipes.

Was my Mom passing off a Blondie all these years as a Congo Bar instead? Did she make her own variation to the recipe decades ago and rather than re-naming it to the acceptable colloquialism for the masses, she stuck by the original name? 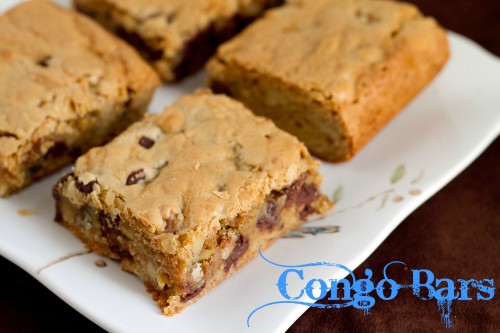 I don’t know. But I do know that her Congo Bars taste darn fantastic AND I never mess them up like I do with Blondies.

So who cares what they’re called anyway? As long as they taste good, that’s all that matters.

Congo Bars...that may be Blondies

adapted from my Mom
Is it a Congo Bar or a Blondie? Either way, these bar cookies taste great and are super easy to put together!
4.67 from 3 votes
Print Recipe
Servings 15

You can get 15 very generous servings by cutting 3 across on the short side and 5 across on the long side. Or if you want more petite portions, feel free to cut them smaller.

This post is participating in Alli ‘N Son’s Sweet Tooth Friday! Check it out and see what other sweets are on the table today.