The garden this year has been an interesting experiment. What started as a few potted herbs quickly expanded into over forty plants. What caused this expansion? Cilantro.

As my daughter and I walked past the cilantro plants in the greenhouse, we were stopped in our tracks by the delicious aroma. We had to have it. Which meant we needed tomatoes, too. And bell peppers. And hot peppers. Because, after all, if you have cilantro, you need to make salsa. 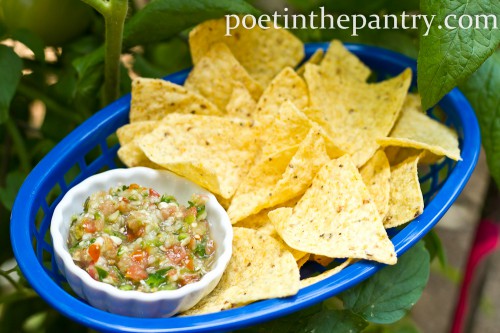 salsa, fresh from the garden

Things rarely go according to plan, however. I wasn’t vigilant enough with trimming the cilantro and just as my tomatoes are finally starting to ripen, the cilantro has gone to seed and died off. The bell peppers meant to fill my jars of homemade salsa have been reluctant to produce, currently sporting only 2 specimens on 4 plants. I thought all salsa hope was lost.

Then I saw My Kitchen Addiction‘s post last week. She, too, had been suffering from her garden’s refusal to cooperate, but she didn’t let this hold her back. She took what she had and made the best of it, preparing a garden fresh salsa that sounded amazing. She is the embodiment of turning lemons into lemonade; I had to do the same. 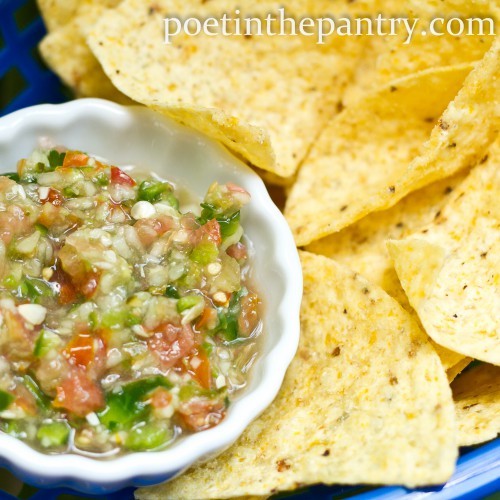 My jalapeno plant has been wildly at work, popping peppers all over the place. The pickling cucumbers have also been quite abundant this year. My cherry tomatoes are *finally* starting to ripen and I was lucky enough to have a regular-sized tomato that just turned red, too. I grabbed likely candidates and got straight to work. And I must say, I am pleased with the results.

No, it’s not what I envisioned when I planted the garden this spring, but the freshness can’t be beat. The flavors are not the same, but it takes me back just a wee bit to when we visited Mexico last year and the fresh salsa that could be found everywhere on the premises–completely different than the jarred stuff you get in the store. Another bite and maybe, just maybe, I can feel the ocean breeze on my face once more.

Thank you, My Kitchen Addiction! You are an inspiration! 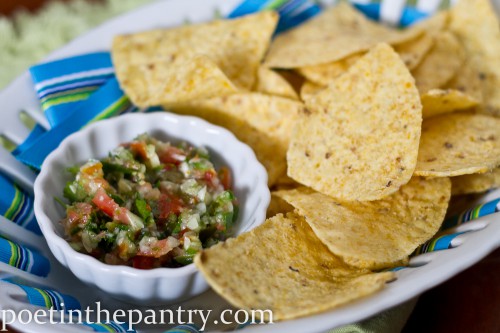 inspired by My Kitchen Addiction
Salsa doesn't have to be the standard fare. You can make it from just about whatever your garden is putting out!
Print Recipe