Bulk savings stores seem to be a repository for the dried-up, worthless remains that nobody else wants. Can’t sell these bath mats? Send them to Ocean State Job Lot. These cupcake-scented soaps aren’t moving? Give ’em to Big Lots. Get it on out and give it away–all at bargain basement prices.

They’re not all has-beens, however. If you’re willing to sift through the piles, eventually, some jewels will reveal themselves among the rocks and pebbles that have trickled down the stream of commercial enterprise. Sure, a lot are failed dreams and washed up merchandise, but there is treasure to be found, as well! 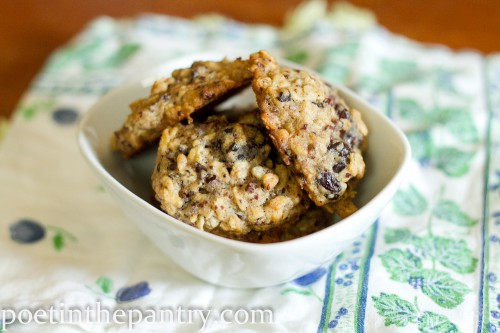 I had an opportunity recently to peruse the local Big Lots without my children in tow. This, in and of itself, was worthy of celebration! As were the boxes of my latest shade of hair dye that were still on the shelves, despite over a month passing since my last visit. Score!

See, that’s part of the problem with these types of stores. Don’t get too attached, because the merchandise is always changing. See it today? Better stock up–it might not be there tomorrow.

I leisurely strolled the aisles, luxuriating in the lack of time constraints, as well as the wonderfully absent need for reprimanding rambunctious offspring, when I thought I spotted something noteworthy. I rolled the cart back and reached up on tip toes, trying my best to investigate the back of the top shelf. Sure enough, behind the Dagoba chocolate bars, at the bargain price of $2 each (which is deal all by itself), was a lonely box of Scharffen Berger Milk Almond bars. I never see Scharffen Berger in my community–apparently, we’re too blue collar for them–so this piqued my interest. I finally succeeded in grasping a bar and nearly burst out in song when I saw the price–$1/bar. One-freaking-dollar-per-bar!!! They sell for nearly $5/bar normally! Sure, the expiration date is a mere two months away, but I can assure you, no chocolate would be wasted. I grabbed three bars. Looked around to see if anyone else noticed the cache, then grabbed two more. I returned the remains to the shelf and tweeted about my success (clearly, my priorities are a little out of whack), then turned back and grabbed two more. Having now amassed seven bars of chocolate, I decided I should probably stop there, so I continued on.

Only, I went backwards, curious about what other roses were hidden among the weeds. Sure enough, behind some rainbow-colored candy-crap was a package of Scharffen Berger Roasted Cacao Nibs. No, wait–not one–but three of them! At $3/bag, these are a savings of nearly $6 on each bag. I only purchased one, having never used cacao nibs before, but I’m thinking about going back and seeing if the other two are still there. Purely for research purposes, I assure you.

And that’s where I stood. With a bag of Cacao Nibs and no freaking clue what to do with them. I knew they were a deal–and fancy, too–but what the heck was I to do with them?

Enter Woman’s Day. I recently received a free subscription to Woman’s Day magazine (I know, I’m so thrifty) and the mailman stuffed the September 2011 issue into my mailbox just yesterday. I didn’t really have time to look it over. Okay, that’s a lie. I have all the time in the world this weekend–I just wasn’t feeling like looking it over. In any case, I flipped through it quickly, just waiting for something to catch my eye, when a big chunk of the pages thumped on over, revealing a cookie recipe. Not just any cookie recipe: Chewy Chocolate Cherry Oatmeal Cookies.

Now, last month when I went to Big Lots, I scooped up some dried cherries. They were less than $3 a bag, which is even cheaper than I can get them at Trader Joe’s (my usual favorite resource for affordable, quality baking goods–though, at 20 miles travel distance, a destination I do not reach often). At the time, I had vague thoughts of throwing them in an oatmeal cookie recipe, but I never got around to working on it.

This is kismet. Fate. Destiny. Whatever. I’d been meaning to make cookies like these anyway and there they were–presenting themselves so boldly that I could not ignore them. Better yet, the wheels started churning in my little head and I realized that I could, in fact, replace the chocolate with the cacao nibs and it would probably work out well. Bingo! 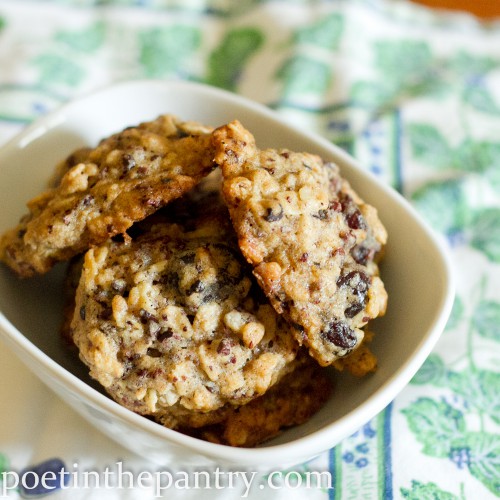 This is not an overly-sweet cookie, the cacao nibs being the most likely culprit. I tasted the dough before adding them and it was perfect, but after, it definitely needed more sugar. The quantity list reflects that adjustment. If you can’t get your hands on some cacao nibs, you can certainly use chocolate chips or chopped chocolate in their place. The original calls for bittersweet, but you can make the call on that. If you do use chocolate chips, you can reduce the brown sugar by 1/4 cup. Stick with cold butter so your cookies spread less. (Remember–Lobsters Scream When You Boil Them by Mark Scarbrough and Bruce Weinstein? Always use cold butter in baked goods! Cold butter traps air better, and you want that air to lighten up and help leaven them. It’s something new I’ve learned and I’m sharing it with you so you can benefit from this nugget of knowledge as well. You’re welcome.)

Now get on out there and see what you can find at your local Big Lots/Ocean State Job Lot/what-have-you. You just never know…