Learning is a process of building on mastered theories and techniques. You figure out a step and use that knowledge to get through the next one. We are all perpetual students, as there is always something new to learn.

Having discovered that tempering eggs is not as difficult as it seems–or at least not as scary as previously thought–I’m building on that today, with crème brûlée. It is, after all, on my list of goals for this year. And when I heard that this past Wednesday was National Crème Brûlée Day, I decided it was time to knock one off the list! 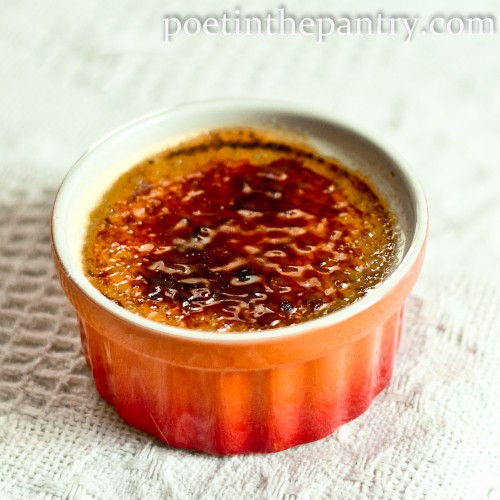 During the brief time in my early twenties that I worked as a baker’s assistant, one of my jobs at the bakery was to prepare the tarts for display and sale. If a customer bought a custard tart, it was my job to sprinkle the sugar on top and torch it to perfection. Fun with fire, right there in the kitchen. 🙂

The Big Guy gave me a kitchen torch this past Christmas, as I had expressed interest in trying to make my own torching treats at home. Since then, I’ve only used it for mock s’mores–nothing like setting flame to marshmallows in your pajamas at 10 o’clock at night and then quickly devouring the evidence, before anyone discovers what you’re up to. Not quite what I envisioned using this tool for, though I certainly will not complain.

Today, it’s time to be a grown up. The skills from making the custard base for Jerry and Ginger Ice Cream carry over well. Again, we’re adding hot milk to eggs–cream to yolks–but then baking in a water bath. If you’ve made cheesecake before, the water bath should not be intimidating. If you haven’t, well, there’s no better time to try it than the present.

The fun part comes with caramelizing the sugar. After your custard has baked and cooled, you sprinkle sugar on top and torch it til it’s nicely browned. It’s best not to apply the flame straight down directly on the sugar, but angled across the top. It may take some practice. You’re aiming to melt the sugar so that it forms a hard crust. If you don’t have a kitchen torch, use the broiler in your oven. It won’t be perfect, but it will do. You may also be able to get away with a lighter stick–you know, those things you use instead of matches to light candles. It’ll give you a little more control than the broiler, though there isn’t as much power there as with a kitchen torch.

If that isn’t enough crème brûlée for you, check out Food Babbles! Last month, she learned of my goal to make crème brûlée and divulged that she had a kitchen torch just sitting, unused, in her kitchen. We decided we would tackle this task together. Baking together even though we’re states away from each other–I love this about the food blog community! She went with a Lemon Crème Brûlée that sounds absolutely delicious…mmmm! Now we can both check this off of our lists and call it a success. 🙂 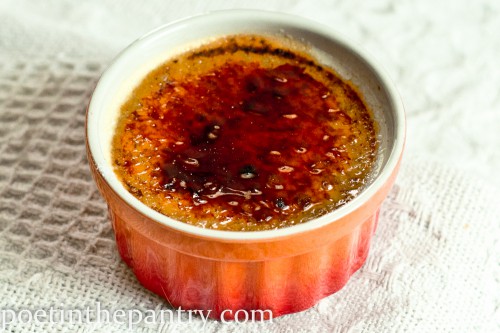 I tried to use turbinado sugar (Sugar in the Raw) for my first two attempts at brûlée-ing and had a lot of problems getting it even and not too dark/burnt tasting. Regular granulated sugar worked much better for me. I recommend that for a beginner, as you’re more likely to be successful on the first try.