Those of you who are regular visitors know about my summer family project: the container garden. This collection morphed from a respectable few pots of herbs to about forty pots of herbs, vegetables, and fruits. Yeah, I went a little overboard. Still, we’ve been going with the flow and seeing what summer will bring us. 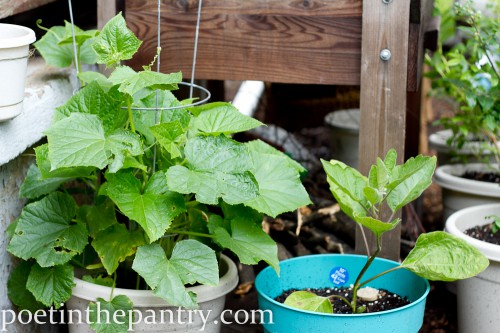 Pickling Cucumbers are getting tall! Fair Tale Eggplant seems to like its home.

There have been some battles with pests. I lost a basil plant to fungus gnats and had to quarantine the other to my front porch because of spider mites. I checked on it today and it’s still growing like crazy with few signs of spider mites, so maybe it will survive after all. Much of the rest of the container garden has been having problems with fungus gnats, due to the consistently cool, wet weather and my mistake in using moisture control potting soil. Never again. I put some potato slices on top of the soil in the pots to draw out the larvae, and it did help somewhat. (You toss the slices when you find a bunch of larvae on them.) I also put up fly paper traps–those long ones that spiral out of casings–and caught a bunch of the buggers. I don’t consider us home-free, but the methods seem to be helping. I wish the ladybug larvae didn’t abandon us weeks ago… 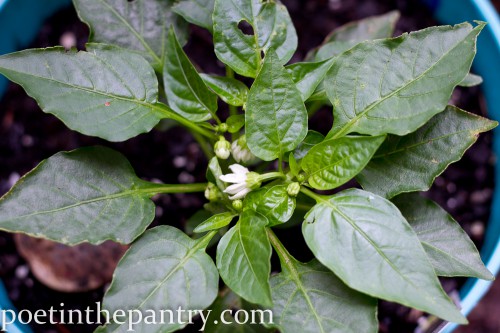 Purple Beauty Pepper, which remains quite short, despite producing many blooms

The kids’ seeds all sprouted and we haven’t figured out what to do with all the seedlings yet. I potted the radishes and one of the watermelon, but I don’t have high hopes for the watermelon. The cultivar is one that gets rather large (Moon & Stars, which boasts watermelons up to 40 pounds!) so it probably will not do well in a pot, but we will try anyway. I still have 3 sunflowers, 2 watermelons, and 3 LARGE tomatoes to move somewhere. Not that there’s much hope of seedlings providing much of a bounty when transplanted this late (we are in New England, after all–first frost is by October). But the kids are enjoying the process, so I am indulging them. 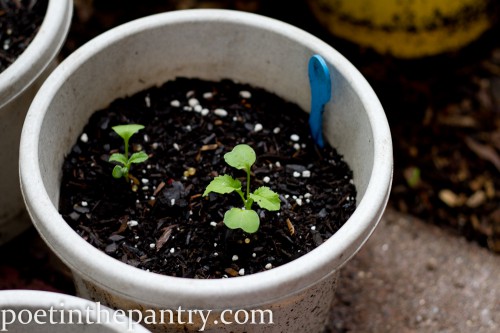 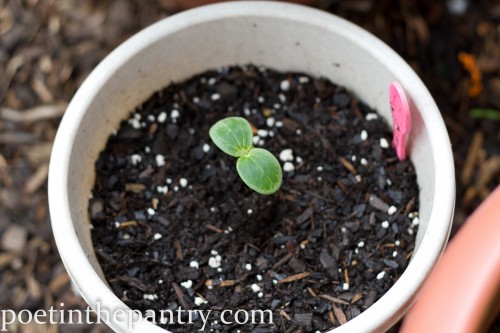 The spinach seedlings are taking off. I knew it was late to plant them, but I had plans to grow them in the dappled shade under the red maple. Instead, the weather we’ve been having is suiting them perfectly. I’ll admit I have no idea what I’m doing with them, but they seem to be happy. For now. 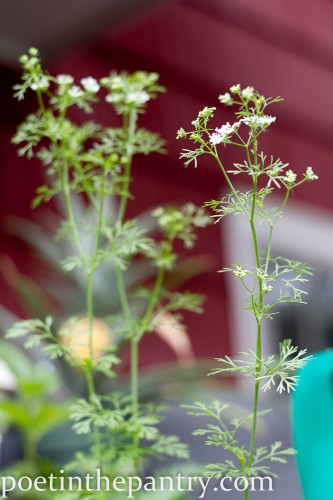 I let some of my herbs flower in hopes of attracting beneficial bugs. I haven’t noticed any sort of dramatic difference, but it’s also been rainy most of this week. The apartment has been my refuge, instead of my garden bench. 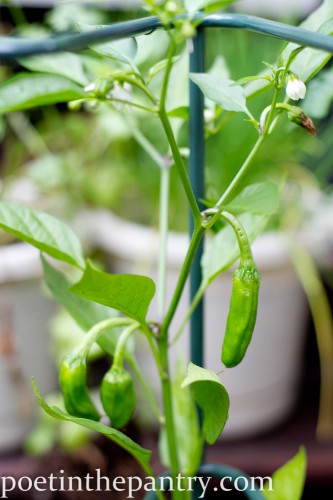 Pepperoncini are doing quite well

We’ll see if any of this experiment amounts to actual produce that I can cook or bake with. In the meantime, it’s going just fine. It certainly could be worse. 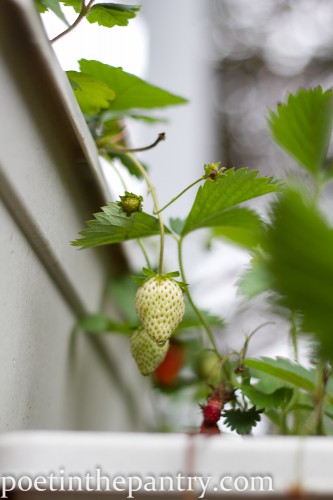 Berri Basket Strawberries are getting large, but rotting (or being stolen) before ripening. 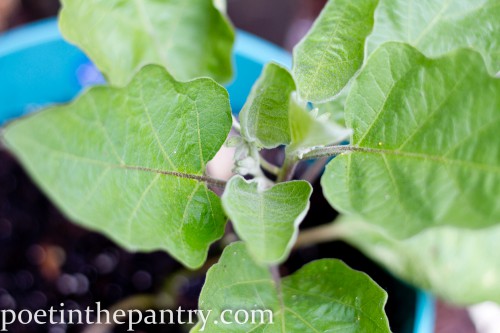 Will my Fairy Tale Eggplant produce anything other than leaves?