I don’t know why I choose 80+ degree days to run experiments involving leaving the stove on for extended lengths of time, but I do. I’m crazy like that. Yesterday was one of them.

Ever since we planted the container garden this year, I had been toying with the idea of canning. For those of you not familiar with that term, canning is the process of preserving food in a shelf-stable state, to be consumed at a later date. It’s like what big companies do with…well, cans…to make it so that the food stays good, without refrigeration. To me, it’s a bit intimidating. If you screw it up, all that hard work goes down the drain when your food spoils. Not to mention how sick you can get if you accidentally ingest spoiled food. Still, I have high hopes for my garden and thought I better get this figured out before the over-abundance rains down upon us–best to be prepared.

The first canning experiment involved onion jam. I know, that doesn’t sound very appetizing. But when you think about its intended use–in my case, I envisioned it resting gently upon a pillow of chèvre, laid upon a wheaty cracker–then you can imagine just how heavenly this concoction would be. Sadly, this experiment did not end well. Over three hours of work, right into the garbage. How discouraging. 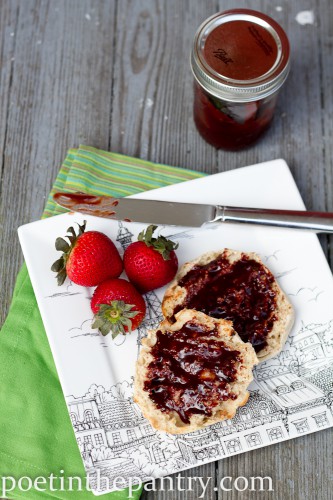 In the late afternoon, I decided to try again. I had seen Mrs Wheelbarrow‘s tweet the other day about a Chocolate Raspberry Whatever and it caught my eye. Chocolate and Raspberries? Yes, please! However, I was thinking of going in a different direction. I had some super sweet strawberries in the fridge that were just dying to be immortalized, so that’s where the road diverged and I started on my journey.

Jam-making is a long process. Make sure you set aside enough time–at least 2, but maybe consider 3 hours, just to be safe. Don’t rush yourself. And if you haven’t done it before, be kind to yourself. It takes practice, just like anything else. I consider myself to be barely acquainted with the practice, but I will be doing more of it. The important thing is to make sure your jars are sterilized. I bought a kit with everything I needed so I wouldn’t have to worry about missing an important tool at the wrong time. If you’re at all intimidated by the process, I suggest you do the same. Target had it for $30, so it’s not a huge investment. The other thing you really need is a tall stock pot. Up until this jam-making foray, I had survived with pots no larger than 4 Qt. How, I don’t know, but I did. I stopped at Ocean State Job Lot and scored a 12 Qt steel stock pot for just $10, so you don’t need to invest a lot of money. Whatever gets the job done. Half-pint jars (jelly jars) are running about $7-$8 for a dozen around here, but you can re-use the jars indefinitely, as long as they’re not damaged. Seals (tops), however, must be replaced every time you can something. Let’s be safe, here–it’s not worth saving a couple bucks to end up poisoning everyone, okay? When properly processed, jars are considered shelf-stable for one year. Just store in a cool, dark place. Once the jar is opened, you must refrigerate the contents.

Like Mrs Wheelbarrow notes in her post, the consistency of this recipe falls somewhere between jam and sauce. Perhaps adding pectin would firm it up more? I have no complaints, however. This makes it more flexible, allowing you to slather it on English muffins and waffles equally, inviting more breakfast foods to the yum party. Don’t forget about your ice cream, either! I’m sure it would want in on the strawberry-chocolate lovin’! I know there was talk of gift-giving, but really, after all that work, I think I’m just going to hoard them all for myself. They’re too good to give away. 😉 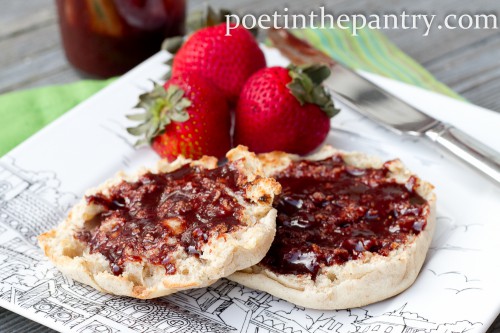 While you’re preparing the preserves, sterilize your jars and lids according to manufacturer’s instructions. In my case, that meant boiling the jars for 10 minutes, adding in the lids for the last 5 of those minutes. Keep the jars in the canning pot to keep them warm. This way, they won’t shatter when you add the hot preserves later.

In a large stock pot, combine chunks of strawberries, sugar, and lemon juice. Cook until sugar is dissolved. Add vanilla bean pod and allow it to simmer for up to 5 minutes. Remove the pod, scraping the insides into the pot. Take your stick blender to the pot and blend the strawberries to the consistency you would like. If you don’t have a stick/immersion blender, transfer the contents to a regular blender or food processor and puree to the consistency desired, returning the contents to the stock pot. I allowed this mixture to gently simmer for another 5 minutes or so.

Turn the heat off and stir in the chopped chocolate. Allow it to sit for 10 minutes (1 hour or more would be great, but you don’t have to wait that long). Turn the heat back on and bring to a boil. Boil for 5 minutes, stirring the whole time. Turn off the burner and let the pot sit for 2-3 minutes. Try gently pushing the surface with your stirring spoon or silicone spatula. If the surface wrinkles, then you are ready to proceed. If not, try another cycle of boiling for 5 minutes, waiting for 2-3 minutes, and check again for wrinkles.

Transfer contents to warm, sterilized half-pint jars, leaving 1/3″ space from the rim of the jar. Wipe the rim with a damp cloth and then affix the top. Screw on the band (it doesn’t need to be super tight–just enough to keep the top on). Repeat for the rest of the preserves.

Using the jar lifter, reurn the jars to the canning pot, making sure the jars do not touch. Jars should be covered with 2 inches of water–if not, add more hot water to the pot. Process. This is where there is some dissention. My source recommends 5 minutes for 1001 to 3000 ft elevation, 10 minutes for 3000-6000 ft elevation, and 15 minutes for 6000-8000 ft elevation. I live pretty close to sea level (I think my actual elevation is something ridiculous like 97 feet), but I wanted to play it safe. So I had the burner on for 5 minutes of boiling, then turned the burner off and let the jars sit in the hot water for another 5 minutes. Better safe than sorry, right?

Remove the jars from the canning pot with the jar lifter, setting on a wire rack to cool. Allow the jars to sit, undisturbed, for 12-24 hours to cool completely. At that time, check this lids. If there is no air bubble in the center (it doesn’t really flex when pushed gently), then the jars were processed properly. If it does, you should use that jar right away, keeping it in the fridge for up to one week (on the safe side–some sites say up to a month, but I don’t want to be responsible for a botulism outbreak).