So did you make the Cinnamon Raisin Bread from the other day? Good, because now you’re ready for the next step: French Toast. 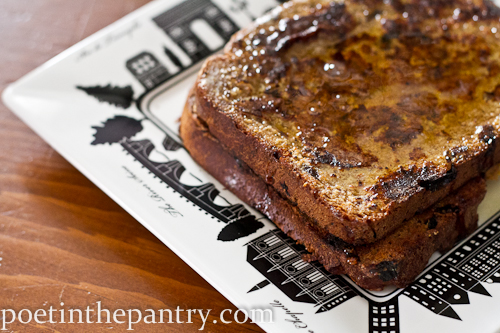 French Toast: the breakfast of champions. The centerpiece of post-drinking middle-of-the-night drinking binges and stuffy Sunday brunches alike. It appeals to every walk of life in its understated elegance and versatility. This is an effortless way to snazz up your leftover bread and make a real impression. All you need are eggs, milk, vanilla, and cinnamon (or nutmeg, if you prefer) and you’re well on your way.

Try not to burn the bread like I did. I’m blaming the kids–they kept distracting me. It couldn’t possibly have been my attempts at capturing the cooking process, utilizing my tripod and the 10-second timer setting, while shooing the dog away. No, not at all. 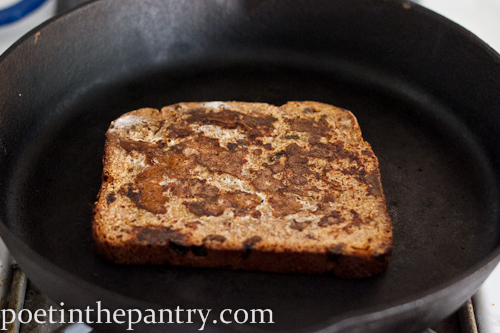 Heat a skillet on medium-high heat. I used a seasoned cast iron pan but if you’re using something else, you may want to heat some butter in the pan, too.

In a shallow bowl, beat together the eggs, milk, vanilla, and cinnamon with a fork until well-blended. Dip both sides of a slice of bread into the mixture and fry it in the skillet, browning both sides. Repeat with the remaining slices. Serve immediately topped with powdered sugar (if desired) and real maple syrup. Makes 4 slices.

You can store leftovers in the refrigerator for up to a week or freezer for longer and reheat in the toaster oven.