Since I was on a breakfast roll, I figured I’d continue on with the theme. Besides, it would have been cruel to give you the recipe for the Whole Wheat Pancake and Waffle Mix and not tell you how to turn it into waffles. 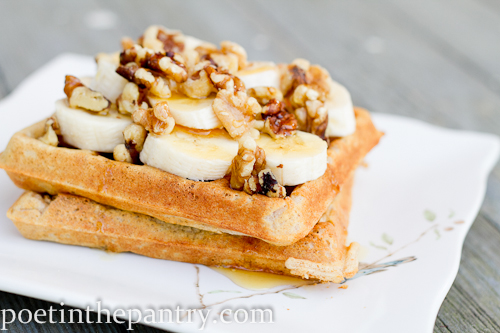 Looking in The Vegetarian Mother’s Cookbook: Whole Foods To Nourish Pregnant And Breastfeeding Women – And Their Families

is a trip down memory lane. Noted on the bottom of the waffles page in black pen is the following: “1/28/2007: lacto-fermented flour overnight–used maple syrup for sweetener–use more syrup next time–coconut oil for oil. Maggie enjoyed.” As long as Maggie enjoyed it, that’s all that really mattered. I try to make notes like this when attempting a new recipe, or new alteration, so when I happen upon this treasure again someday, I can work off my prior experience. Or see at a glance that it’s not even worth trying again.

So here’s the problem: it’s been so long since I made this that I had to pause for a moment to recall what “lacto-fermented” meant. I can’t even locate my copy of Nourishing Traditions: The Cookbook that Challenges Politically Correct Nutrition and the Diet Dictocrats

anymore, which would have shed more light on the matter immediately. For those who aren’t familiar, it’s a technique used to neutralize phytic acid in grains so your body can digest them easier. Purists will call for whey for this task, or at the very least, an acid like lemon juice or apple cider vinegar, added to the soaking water. Buttermilk is also an option as it is acidic as well. I couldn’t be bothered to make whey and buttermilk usually wasn’t called for in the recipes that I soaked grains for, so I just used souring raw milk. It’s not technically lacto-fermentation–but it’s close enough for me. Some people soak their grains in just water anyway, so it’s still beneficial. 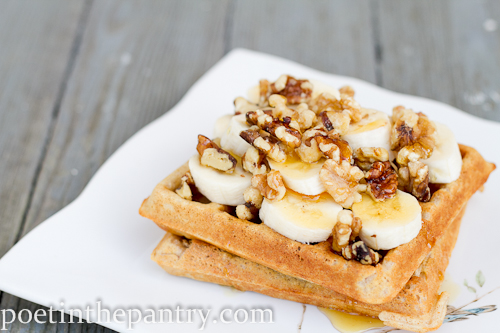 I won’t get into the whole raw milk thing here because people have very differing opinions on it. Plus I’ve been talking about it for a few days now and it’s probably getting old. The quick run-down is that raw milk, on top of having built right into it the enzymes needed to digest milk, also contains beneficial bacteria. As it sours, it doesn’t go bad–it’s just a step closer to becoming yogurt. Or cheese. Depends on how far you want to go. What I would do was buy my raw milk the day before the sell-by date (for half price!) and 6-7 days later, it would be starting the souring process. That was prime time to bake with it. And soak with it.

Alright, enough talk about that. So what did we learn? 1) Writing notes in your cookbooks can be useful, but 2) only if you refer to them frequently. Or it may at least jog your degenerating memory, which can take you down that path all over again. This can be a very excellent thing.

Much like the pancakes from this mix, there are two methods you can use: the straight-on, traditional way, or the soaking method. It’s your choice. Both are pretty darn good. Waffles freeze well, so put your extras in a Ziplock bag and save them for hectic weekday mornings.

You need to start with the Whole Wheat Pancake and Waffle Mix.

Whole Grain Waffles
adapted from The Vegetarian Mother’s Cookbook: Whole Foods To Nourish Pregnant And Breastfeeding Women – And Their Families

Turn on your waffle iron to preheat it. In a large mixing bowl, beat eggs and milk until smooth. Beat in the oil and waffle mix. If batter is too thick, add more milk. With a ladle or large cookie scoop, drop batter onto the hot waffle iron. Cook until golden brown and crisp (on my waffle iron, that means when it stops steaming and the red light comes back on). Serve immediately with fruit, jam, honey, pure maple syrup, … the only limit is your imagination.

*If you are making this with raw milk, you can lacto-ferment/soak the grains. Instead of making the whole WW Pancake and Waffle Mix and scooping from that, you’ll scale it down to just what was called for in this recipe, soaking the flours in the raw milk overnight on the counter, and then adding the rest of the ingredients in the morning. Thus, you would combine 3/4 cup whole wheat (or white whole wheat) flour and 3/4 cup whole wheat pastry flour in a mixing bowl with 1 cup of raw milk, stir and then cover, leaving out overnight on the counter (12 hours, if you can). In the morning, when you’re ready to make waffles, add to it: 1/8 tsp baking soda, 1 1/2 tsp baking powder, 1/8 tsp fine sea salt, 1/2 tsp cinnamon, 2 tsp dehydrated cane juice, 1/4+ cup raw milk, and the 2 Tbsp melted coconut oil and 1 large egg from above, proceeding as normal with the method for making the waffles.