From the start, however, I envisioned the assembly slightly altered. It’s not that I think Katrina’s concoction needed work, because it surely does not. She struck gold with this idea! But I felt this strong pull to re-envision her work and look at it in a different light. I had to make it!

“Making” is a whole other story these days. With my recent discectomy and activity restrictions, I’m not really capable of cooking or baking right now. Rather than cooling the flames, though, this limitation fueled the fires already burning bright, desire winning out over rest. There had to be a way to make this work! Could someone lay out all the equipment and ingredients in advance, so that I may carry out the task without risk of re-injury? Or better yet, could I convince my mostly non-baking, non-cooking husband to work as my hands, following the blueprints in my mind to create this confection of perfection? He was not so sure. Luckily for you, I was able to convince him otherwise. 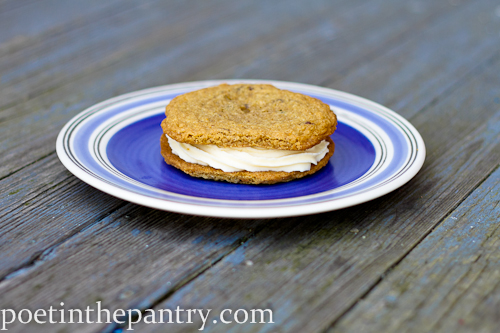 My first attempt at the no-bake cheesecake portion was a flop. Katrina’s version of it is largely what influenced me to try this alteration but when I blended together the ingredients for it, my cheesecake was quite loose. Too loose. I figured maybe it was supposed to set up as it cooled, so I had The Big Guy package it up and we put it in the refrigerator, dutifully waiting out five hours. Unfortunately, it never magically transformed into that fluffy consistency captured in Katrina’s picture–mine refused to cooperate, remaining a syrupy mess instead. There weren’t many steps to follow, so I’m not sure where I went wrong. Given the fact that I was planning on making Cheesecake Cookie Sandwiches anyway, however, I decided to throw the un-set cheesecake into my ice cream maker with 1 cup of heavy whipping cream and turn it into cheesecake ice cream instead. That worked–sort of.

The Big Guy then took on the role of cookie maker, under my tutelage. Even though I should have kept to the sidelines, I mixed the batter myself (shame on me, I know!) and had him put it in the fridge for an hour, due to the high humidity and temps in our apartment. Then he scooped out huge dough balls (6 per cookie sheet!) so we’d get beefy cheesecake cookie sandwiches. It took a couple batches, but he caught on quickly and soon, he reached perfection on his own. Big, chewy cookies that were begging to be paired up. 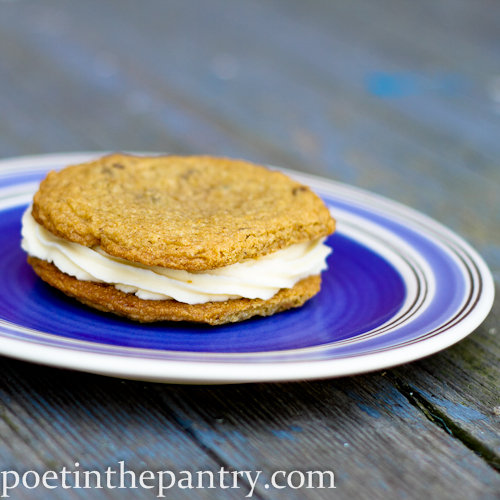 Our first attempt at assembly was less-than-satisfactory. They tasted just fine, the cheesecake ice cream being an especially tasty treat, but despite waiting several hours for the ice cream to solidify, it would not hold its shape once added to the cookies. It was adequate for immediate gratification, so I knew it was a winning combination. But the wrapped sandwiches didn’t freeze fast enough, resulting in a puddle of ice cream that seeped under the cookies–delicious, but disgusting looking. A second attempt was required.

For my next try, I went back to the no-bake cheesecake and decided to re-work that. I used mascarpone cheese this time, doubling the amount to ensure a thicker end product. This worked! I decided to forgo making it into ice cream and go with my original plan of cheesecake cookie sandwiches. After letting the cheesecake mix sit in the fridge for a couple hours, I piped it onto the cooled cookies. I highly recommend wrapping the assembled sandwiches up at this point and letting them sit in the fridge for a few hours before eating–the cookies soften and the flavors all meld together. YUM. Success!

Cheesecake Cookie Sandwiches–portion control of two of my favorite desserts so you can feel indulgent without indulging too much. 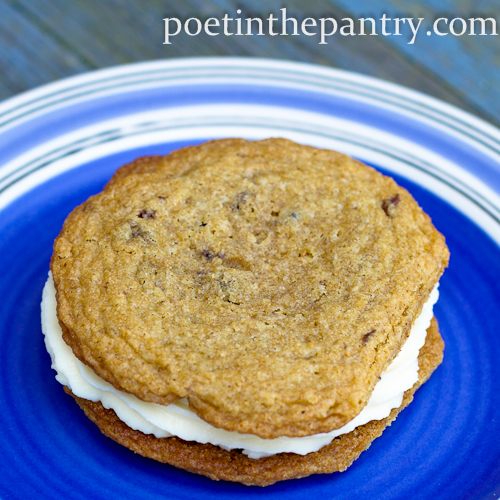 No Bake Cheesecake
adapted from In Katrina’s Kitchen

Blend the above in a large mixing bowl until creamy and well-incorporated. Cover and store in refrigerator for a couple hours until ready to assemble.

Preheat oven to 375 degrees Fahrenheit. Pull out your cookie sheets and set aside.

In the bowl of a stand mixer, cream the butter and sugar until light and fluffy. Beat in the eggs, one at a time. Mix in the vanilla until well-incorporated. Sprinkle the sea salt and baking soda over the batter and gradually beat in the flour. Remove bowl from mixer and stir in the chocolate chips. At this point, you can refrigerate your dough for an hour or two (if it’s hot out, this will help prevent over-spreading) or proceed straight to baking.

Using a large cookie scoop, drop mounds of batter onto your cookie sheet, leaving plenty of room between the mounds for spreading (we did 6 per sheet). Flatten the mounds slightly. Bake for 8-10 minutes, then leave on cookie sheets for 2-3 minutes before transferring to a wire rack to cool completely.