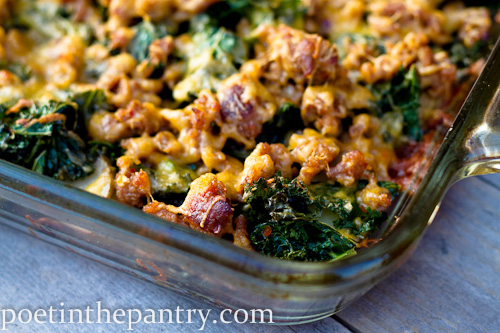 Looks good, doesn’t it? Alright, it’s not the “healthiest” concoction. But I promise you, the kale balances out the other stuff. And if you have a picky eater in your house, this will surely convince him to not only try kale, but love it as well.

I had never even tried it myself until four years ago. My youngest was a newborn and we had joined a CSA at a local organic farm for the first time. I figured that by pre-paying for our veggies, it would force us to eat more of them–and a greater variety, too. There were some failures from the deal–kohlrabi comes to mind–but for the most part, it worked well for us. I ate more greens that summer than ever before, even with a new baby and a two-year-old under foot. 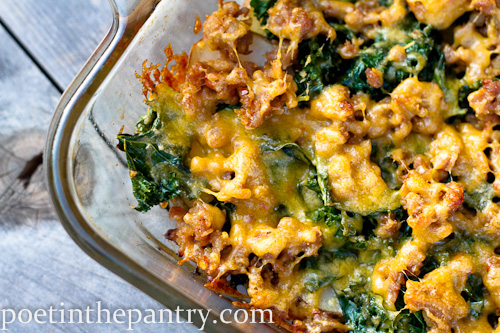 The inspiration for this dish comes from a meal that was made for us when my son was just days old. The mommy group I hung out with at the time made it a point to set up new moms with 1-2 weeks’ worth of meals. Each of us would pick a day and volunteer to bring over something for the family to help out. Every mom should be so lucky, whether it’s for her first or tenth child. Their outpouring of love and support really touched us. And the meals were delicious–more so because we didn’t have to worry about putting together something at such a hectic time. 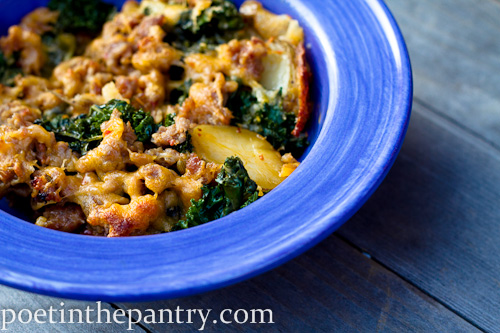 This one in particular became part of our dinner routine for a while, but for some reason I cannot recall, I stopped making it. Recently, there were a few requests for kale recipes, though, so I figured it was time to resurrect it. I can see this becoming a regular again.

I originally made this recipe using sweet Italian sausage but the hot Italian sausage adds some depth. Either will work depending on your tastes. Sure, it’s not diet food, but it’ll definitely satisfy appetites. And the kale makes it somewhat good for you, right? 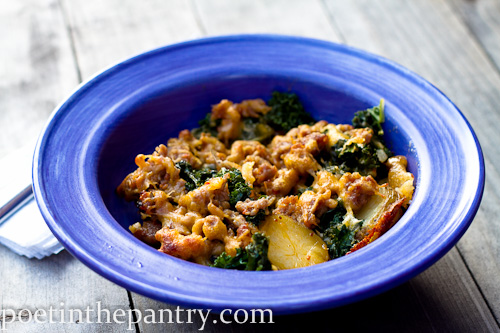 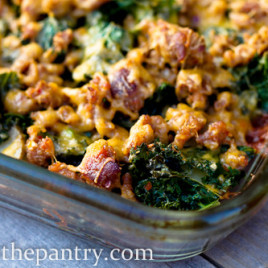