I am, at heart, a night person. I work best when everyone is asleep and I have the house to myself and I’ve had a whole day of awareness behind me, rather than just emerging from a sleepy cocoon in the early AM. At our old apartment, I used to re-arrange the furniture in the middle of the night, much to the surprise of the Big Guy when he awoke in the morning. Even now, it’s not that uncommon for him to wake up in the middle of the night and ask me why I’m not asleep yet. It’s just how I roll.

Last night, at about 10PM, much like my furniture re-arranging days, I felt the need to bake. Right then, right there, did not matter that it was nearly today. I didn’t even want to eat what I was baking–I just wanted to bake. I needed to delve into the creative process, making a sweet collaboration from an assortment of seemingly disconnected parts. 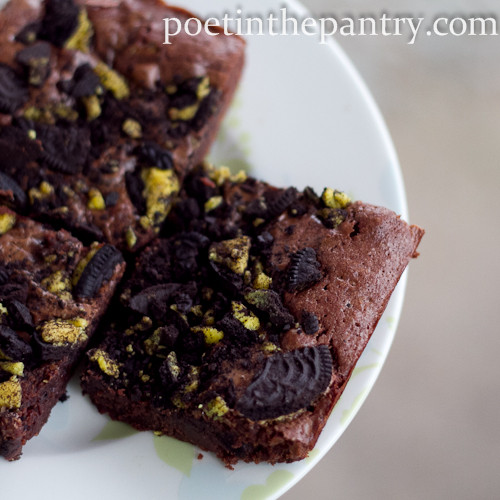 This time, it was the Oreo Brownies from Tramie’s Kitchen that were on my brain, preoccupying my thoughts. I attempted to make them several days ago but discovered that the Big Guy had already eaten all but 6 Oreos in the package in the cabinet. Oreos are such a rarity in this house–I guess I can’t blame him. In any case, I picked up a new package over the weekend and knew it was only a matter of time before he would sneak into that package as well–it was now, or never. 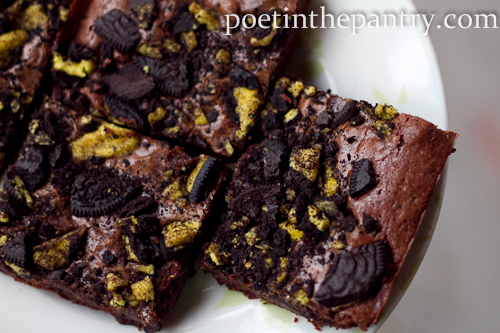 When I bought the ingredients for this recipe, for some reason, I was sure I needed 60% cacao chocolate instead of unsweetened. Luckily, I had 3/4 of a 4-ounce bar of Ghirardelli 100% cacao chocolate in the cabinet, but it wasn’t enough for the recipe. So, I improvised a little bit… and I would make them this way again. They’re fudgy and dense, a little more intense than the brownies I usually make (which are often cakey) but definitely not bad. The aroma of warm Oreos in the oven spread throughout the apartment, making it a little difficult to be patient and go to sleep last night. (Hey! I know I said I wasn’t interested in actually eating the brownies when I started to make them, but warm Oreos is a hard scent to ignore!) Fortunately, I was able to wait and was rewarded with Oreo brownies for breakfast–the breakfast of champions! 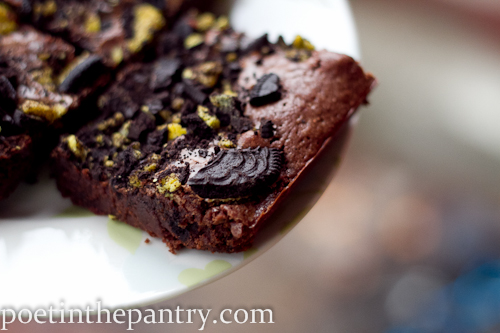 (By the way, I used the spring version of Oreos, hence the weird yellow fillings…)

Preheat oven to 350 degrees Fahrenheit. Line a 13×9 baking dish with parchment paper and set aside.

In a microwave-safe bowl, add the chocolates and butter, broken up into chunks. Microwave at 100% power for 1 minute; stir, and then keep going at 30 second intervals, stirring in between, until the chocolate is completely melted. Set aside to cool a little.

Take the bowl with the chocolate and stir in the sugars. Add the eggs, one at a time, incorporating completely before adding the next egg. Stir in the vanilla. Add the flour, only mixing until completely incorporated. Fold in 1 cup of the Oreo chunks.

Pour and spread into the prepared 13×9 baking dish. Sprinkle the remaining 1 cup of Oreo chunks on top. Bake for 25 to 30 minutes, or until fudgy crumbs come out when a toothpick is inserted in the middle. Be careful not to overbake! Leave in the pan and allow to cool completely before cutting.