While I enjoy the lack of noise, something that’s a rare occurrence around here, sometimes, it’s just too much.

Like last night. The Big Guy had been away for a couple of nights already on a ski trip with friends. We were both supposed to go but childcare arrangements failed to come through and rather than both of us staying home, missing out on the annual trip with friends to Sugarloaf in Maine, I urged him to go without me. Then I missed him terribly the whole time he was gone. Or it could just be that I felt left out of all the fun. 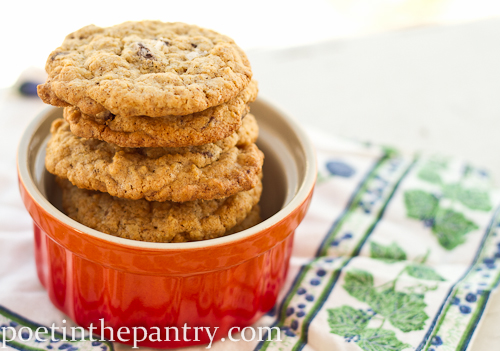 Don’t get me wrong–the kids are great and they bring their own entertainment to the table. But I spend most days with them anyway. This was a special trip I was looking forward to since last March and it was a bit of a loss when I had to admit defeat and plan on staying home instead.

The first night, I slept horribly. The second wasn’t much better. Then last night, the kids were away at my father-in-law’s house, offering a little bit of respite from temporary single-momdom and an opportunity to get some homework done. Or go out and have fun. But that didn’t materialize either.

By 8PM, I had had enough silence. I had had enough of being alone. And even though those little buggers would surely have been taunting bedtime if they had been home, I was missing the kids, too. 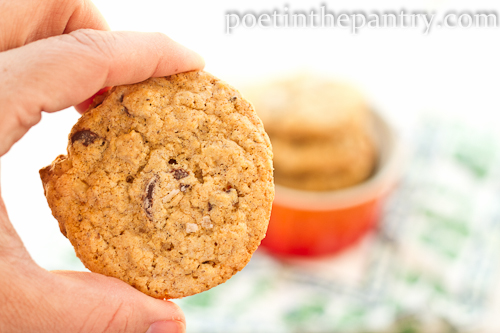 I hadn’t baked all week, stuck in state of sadness in anticipation of the weekend to come, but I broke through the funk last night. Not because I wanted to eat cookies, but just because I needed to create in order to feel less of a waste of space. It made sense at the time.

The recipe came from the packaging for Bob’s Red Mill Whole Wheat Pastry Flour. What’s cool is that there are no eggs, so you can eat the raw dough to your heart’s content. But the original seemed–lacking. In several ingredients altogether, and just not enough of others. It also claimed to make only 2 dozen cookies, hence why I started making them at 8PM–but instead, I somehow ended up with 5 dozen. It’s a miracle! I think not… 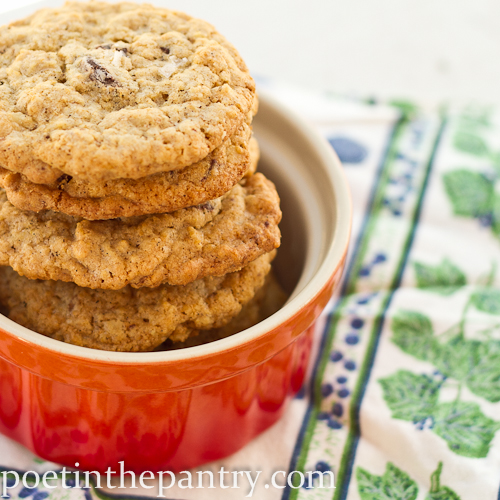 They’re not super-sweet, which is great when you’re trying to cut back on the junk but still allow yourself a little bit of an indulgence. Since you have to chill the dough for 20 minutes, they’d also be a great dough to keep on hand in the fridge to bake off just a few at a time. I wouldn’t keep it in the fridge more than three days, just to be safe with the milk and all, but it should freeze well. Just scoop out the balls first onto a cookie sheet and freeze them. Then throw them in a freezer zip top bag and you’ll be all set for future cookie cravings. 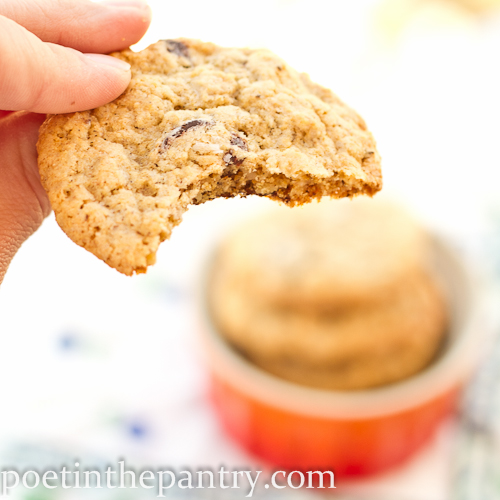 In the bowl of a stand mixer, cream together the butter, coconut oil, and vanilla sugar. Once light and fluffy, mix in the milk. Sprinkle the baking soda and baking powder around in the bowl and gradually add in the pastry flour. Mix in the rolled oats, cinnamon, and sea salt (if you’re mixing it in–if topping the cookies instead, reserve it for later). Stir in the chocolate chips and walnuts and then put the bowl in the fridge to chill for 20 minutes.

Preheat oven to 350 degrees Fahrenheit. Drop dough by rounded spoons (or with a cookie scoop) onto a cookie sheet. If using the flaky sea salt, sprinkle a few flakes on top of each dough ball. Bake for 10-12 minutes, one sheet at a time. Remove to a wire rack to cool completely.

These can be stored in an air-tight container at room temperature for 3-5 days, or frozen for a couple of months.