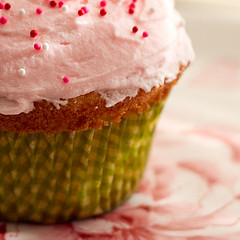 What could go more perfectly together than pink cupcakes and Super Bowl Sunday?

Alright, not the ideal combination for most sports fanatics. Still, with the plan of stuffing ourselves with a smorgasbord of snacks anyway, it seemed like the perfect occasion for experiment number 1 in making cupcakes from The Magnolia Bakery Cookbook: Old-Fashioned Recipes From New York’s Sweetest Bakery

Like I mentioned yesterday, this experiment was formulated a couple weeks ago. The nasty cold I had last week–which persists even today!–derailed my plans, however, and I was forced to wait. It’s okay–cupcakes were the last thing on my mind anyway.

I must admit, I am not a huge cupcake fan. I think the latest buzz about them is cute and all, and I love the idea of cupcake trucks and the like, but they’re not my first choice when it comes to dessert. They’re a hassle to bring anywhere, for starters. Without a dedicated cupcake carrier–which, surprisingly, I do not have–you’re pretty much guaranteed that a good portion of the frosting will be transferred to the interior of your container. The frosting-to-cake ratio is also low, falling far short from that of a layer cake. If I’m going to eat cake, there better be a decent quantity of frosting to go with it, or I’m just going to pass. 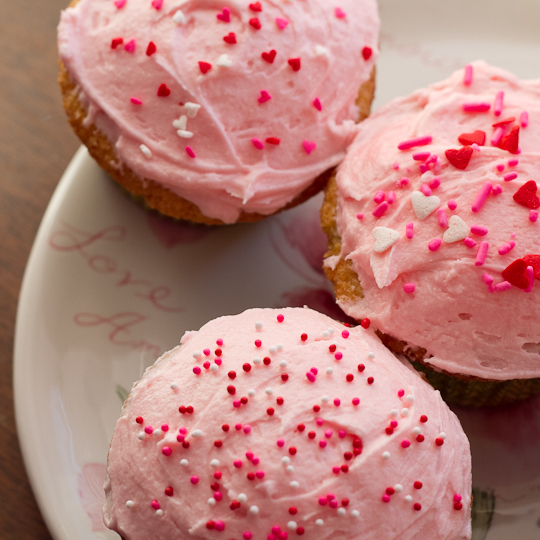 Speaking of frosting, that brings its own set of challenges to the table. I’m all about flavor without fuss. Cupcakes require a lot more fuss than I’m willing to commit to. If it tastes great, fine, that’s all I care about. I don’t want to have to spend all day making it look like a pretty rose, too. After all, it’ll be gone in about 20 seconds once served–all that work down in the gullet in no time. Seems like a waste to me.

Still, I have my reasons for breaking my usual rules and trying this out. I settled on the Traditional Vanilla Birthday Cake recipe from The Magnolia Bakery Cookbook: Old-Fashioned Recipes From New York’s Sweetest Bakery

and paired it with their Vanilla Buttercream. Personally, I would have preferred a nice chocolate or mocha frosting, but you can’t make those in a pretty pink hue. C’est la vie. 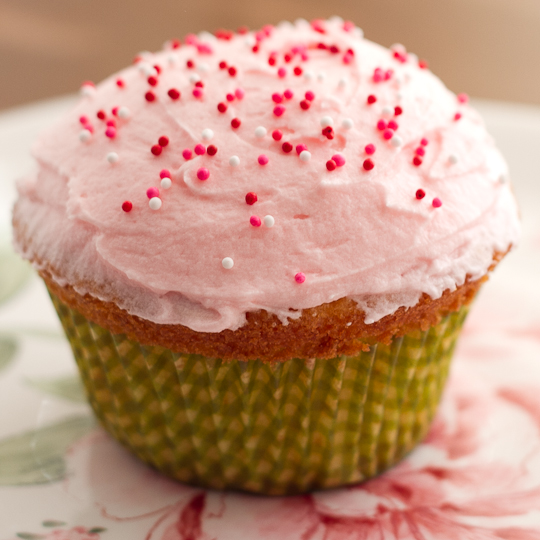 The cake turned out to be the best cake I have ever had. Seriously. I’ve been a box mix girl all the way (just revoke my baking card now!) but this has converted me! I was afraid it would be dry and tasteless. Instead, the crumb was the perfect blend of dry and moist and it wasn’t cloyingly sweet. The frosting was, however. Which is fine if that’s what you’re after. I kind of wasn’t, so I guess I’ll be experimenting more with frosting shortly. If you’d like to try them out, you can find the recipe on food.com.

I do want to add that my tests involved cutting the recipes in 1/4. Sometimes this messes baked goods up but there were no ill effects. So if you don’t want to make 24 cupcakes at a time, this’ll work for you. 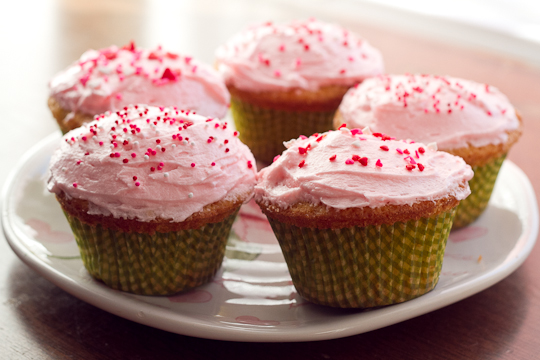 Pink cupcakes at a Super Bowl Party? You bet! Why not?