It’s easy to get caught up in the search for the latest and greatest of everything. Why wouldn’t we? We’re in the 21st Century–we have so much available to us that we should be taking advantage of. Why settle for less? There’s always something better, faster, smarter, sharper, sleeker out there–new, new, new! 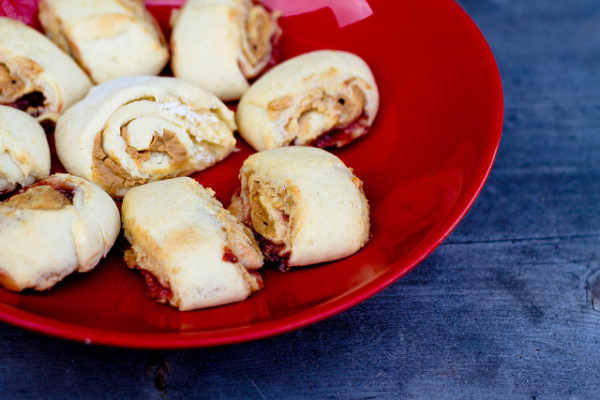 Sometimes, however, it’s the simple things that work best. 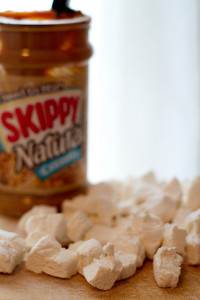 Like peanut butter and jelly. Harkening back to the days of Rainbow Brite lunchboxes and trading sandwiches with friends across a communal table, peanut butter and jelly is the epitome of simplicity. Two slices of white bread + a smear of smashed peanuts + a smear of grape jelly=pure bliss. Well, as long as you don’t have peanut allergies. And don’t have problems with the bread sticking to the roof of your mouth. (That’s for you, little bro!) It doesn’t get any better than this.

Now that I’m an adult, I should have moved on to more high brow choices, exemplifying my enlightened place in the world. But peanut butter and jelly will always have a special place in my heart. And so will these cookies, an inspired combination I discovered at Baking Bites. Sophistication meets simplicity…

Sometimes when you try to improve on a classic, though, it falls flat. Literally. You need to make sure you chill this dough for as long as the recipes calls for and I’d venture even longer for the shaped rugelach before you bake them. I rushed the first batch to utter ruin. The second batch sat in the fridge for about 30 minutes before I popped it in the oven, and even then I had some problems with them falling over. Also, you need to go easy on the fillings themselves. Lots of filling doesn’t=even better taste. It ends up all over your baking sheet. Parchment paper is highly recommended. Lastly, you  need to roll tightly. I thought I had this covered since I’ve worked with cinnamon rolls quite a few times before, but they were still too loose. It could have been from the extra filling oozing out…

On the other hand, experimentation is fun. Despite the setbacks, on my 3rd batch, I tried a new variation: the fluffernutter rugelach. I had some homemade marshmallows in the cabinet that needed to be used up anyway, so why not? I smeared 2 rows of peanut butter, cut up the marshmallows for the other 2 rows, and stuck this batch in the freezer for 10 minutes, then the fridge for another 20 minutes. I wasn’t taking chances with this one not being chilled enough, especially with the marshmallows. Granted, I kind of expected a flop here–marshmallows, by nature, melt in heat, which would only recreate the problems I was already having. But since it wasn’t coming out all that great anyway, why not go down in a blaze of glory? 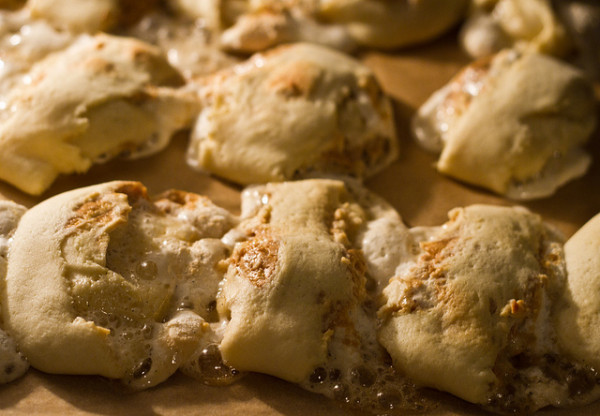 The verdict? The taste is amazing: the cream cheese dough is mellow enough not to overpower the peanut butter and jelly flavors, and they’re fantastic right out of the oven. The fluffernutter rugelach were even better. But they’re kind of a pain–not to mention, a lot of dishes–for what I could have accomplished in a few minutes time on a piece of bread. Maybe next time, I’ll stick with the simpler delivery system. It was a worthwhile experience but I don’t think I’ll make these again.

In a large mixing bowl, cream the butter and cream cheese. Add the sugar and beat until light and fluffy. Add the eggs, 1 at a time, beating until fully incorporated. Add the vanilla and milk. Gradually add the baking powder, salt, and flour until completely mixed. Dough will be sticky. Set out 3 pieces of saran wrap and divide the dough amongst them, wrapping tightly and setting aside in the fridge for at least 1 hour.

When ready to work with the dough, preheat the oven to 350 degrees Fahrenheit. Flour your work surface and lay out the chilled dough, working with 1 portion at a time. Roll it out to a roughly 12×8 rectangle, being careful that it’s not stuck to the work surface. Spread 2 rows of peanut butter and 2 rows of jam on the dough so you have alternating stripes of each. Be careful not to put too much filling on the dough. Roll tightly along the longer side and cut into 3/8″ sections. Sprinkle the tops with coarse sugar (you can brush a tiny bit of water on top first if you need to in order to get the sugar to stick). Place on a cookie sheet lined with parchment paper and let them cool in the fridge or freezer for at least 20 minutes before baking.

Bake for 15-20 minutes, or until golden brown. Remove to a wire cooling rack to cool completely.