I decided to go with siggi’s Icelandic style skyr strained non-fat yogurt as my first selection in the taste-testing journey, mainly because the foil top ripped between the grocery store and home. I hate it when that happens. 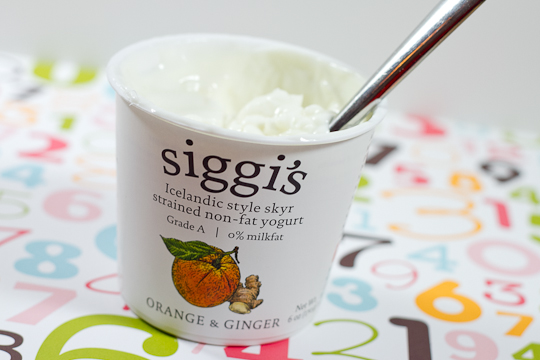 Normally, I wouldn’t buy this. The little 6 oz container of milky bacteria regularly costs $2.29 each–yikes! They were on sale this week for 2/$3 and while that’s still more than I usually pay for Chobani.

When I first opened the container, there was a lot of whey on top. I was surprised to find this given the statement on the packaging that it is a “strained” yogurt. I’m glad I stirred it in instead of pouring it off though. This yogurt is THICK–thicker than Greek yogurt–which felt a little weird in the mouth. There was almost a dry feeling on the tongue while consuming, which seems so contrary. Was it due to the density? The tanginess? How can something wet feel so dry? I’m not a yogurt expert.

I normally eat plain Chobani with a little granola so lack of sweetness is not a shocker. The siggi’s, however, took it to a whole new level. There was a very pronounced tang, likely enhanced by the orange and candied ginger flavoring the product. I found it quite unpleasant initially but I didn’t want to give up–or throw away yogurt that cost me $0.25/oz. The taste grew on me. I spread out the consumption over maybe 20 minutes while I was doing other things and at the end, it was actually quite tolerable, almost even desirable. I wouldn’t go crazy trying to get my hands on it again, but it wasn’t torturous. Perhaps a different flavor would provide more favorable results?

I really wanted to like this product. Per the container, it is:

Any sweetness–which isn’t pronounced at all–comes from agave nectar, which has less of an impact on blood sugar. Because of this, the carbs are pretty low compared to the protein: total carb: 12g; sugars: 10g; protein: 16g. All that and only 120 calories with no fat. This is the dream product for those who are trying to go low-carb or are diabetic, not to mention all the other benefits by not having artificial junk in it that come along with it. 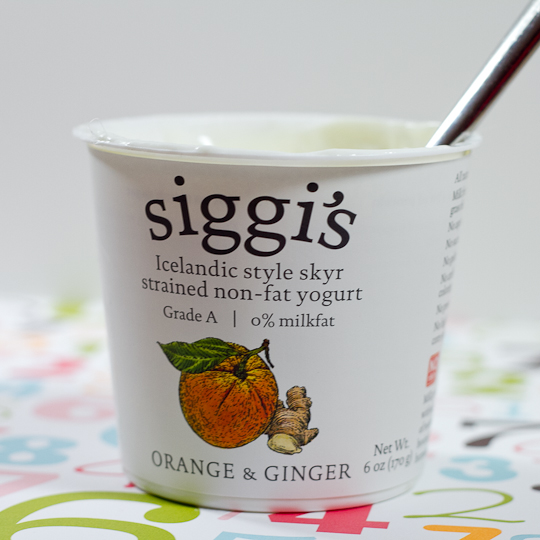 Still, I wouldn’t buy this flavor again. Truth be told, it’s really just too much money for me to justify for yogurt when I can get a good deal on Chobani, which is also high in protein and low(er) in sugar than conventional yogurt brands, but actually tastes *good*.

At least I tried!