I was well on my way to breaking for months now.

With the cocktail of medications I was prescribed for treating my chronic pain and muscle spasms in my lower back and left leg, my head had become quite…out of sorts. I’ve become less social, knowing I don’t always have the energy to fake the smiles they’re used to. I lost late summer to a Gabapentin haze, when it should have been helping me take back my life from nerve issues. When my neurologist replaced it with Baclofen in October, it was followed by several weeks of persistent low moods, culminating in literally running away from it all for a day to try to remove myself from the situation and re-center. I haven’t really found my center since.

Browsing shelves of real books is something I’ll never tire of. Brought 3 home to my collection. #northampton

Last week, I followed my final visit to my neurologist (who, after I refused amitriptyline due to potential side effects, had no more options to offer me, aside from meditation, turmeric, and acupuncture) with what was supposed to be a physical with my primary care physician. I rescheduled this appointment twice during the quest to eliminate the muscle spasms/pain, hoping to be in a better place when I finally did see her. What she got, instead, was a mess.

In the past, I’ve had random panic attacks. Times pushing the shopping cart down the aisle in the store, only to suddenly feel like an elephant was sitting on my chest and I just could not possibly put my foot in front of the other. Dread, fear, blackness weighing down on me, felt, not just perceived, to the point where I wasn’t sure I could even make it home, let alone through the rest of my shopping trip. Mysteriously, these moments would pass and while I could function again, they’d leave me shaken for some time. No cause for concern–I just couldn’t, literally.

I’ve also always run a bit…high strung. My brain thinks step after step after step ahead, worried about 20 potential outcomes that likely will never happen, yet I want to be prepared for them all, because preparation is key, and without it, you can’t deal with these things that may happen someday (but probably won’t ever). It serves me well, at times, like in my career where everything is driven by deadlines, varying depending on the type of proposal and where it is in the process. At other times, it’s impossible to make decisions. Or deal “appropriately” with little unforeseen bumps in the road. They’re not part of the plan–the system goes haywire.

I never took this seriously.

Everyone functions differently. I go to work every day. I manage to feed my family (or supply them amply enough that they can feed themselves). I go out in public.  Thus, I believed my moods fell within “normal” ranges of operation. Come November, however, anxiety began to consume me.

Remember the lows I mentioned? They come with highs, too.

Like that time I decided, while driving home from work, that I would paint the kitchen and hallway. So I stopped at Home Depot, picked up 2 colors of paint, and transformed my kitchen into Lime Lollipop green and the hallway into a Surfer blue. It was all I could think about for 2 days. I got straight to work when I arrived home and didn’t rest until it was completed. It had to get done ASAP, before my energy (and interest) faded.

DONE. Have to touch up some trim, but I’m not painting any more walls. At least, not this month. Colors are a little more saturated than they look. Love it!

More recently, there was the living room project. A couple of weekends in December when, in a mad grasp at keeping everything from spiraling out of control, I rearranged every piece of furniture, cleaned all surfaces, and bought new couches and area rugs. This isn’t that unusual. Except there were times when I would get out of bed in the middle of the night to work on it, because I couldn’t sleep knowing I had not completed the task. I like to finish what I start.

Today’s project: rearranging the living room, including moving my parents’ hutch to the opposite side of the room. Not completely done yet, but it’s an improvement.

Too often, I find myself doing crazy things in the middle of the night. Creative spurts come to me then, and if I don’t follow through, they’ll vanish into the ether, lost opportunities.

My primary care physician made the very correct call in saying that I could not have a physical at this time. Why? Because you can’t have a wellness check when you’re not well. And my not being well extended much further than merely the leg and back pain that I’ve been seeking a solution to during the last 7 or so months.

Right now, the focus is on my mental health. Because it appears that the anxiety that’s been growing daily is not normal, and there’s a chance there’s more to the highs and lows than the usual ups and downs of life.

I’m currently on anti-anxiety meds. Well, first I started Valium so I could sleep at night. In her triaging of the situation, sleep came first, and I understand why. Sleep deprivation reduces pain tolerance, and I haven’t slept well in months. Most fortuitously, Valium also helps reduce my pain and muscle spasms at night. But it was a temporary solution, and certainly not an option for waking hours, when coherency is essential.

Pretty sure this is a recipe for disaster. 😴

Today, I added Buspirone for during the day. This is to gently talk me down from the ledge to where I’ve inched (and sometimes even accelerated) since election day (with greater intensity since inauguration day). I have never felt this way before. I have never been political. I typically avoid confrontation, and like to keep the peace. I can’t keep the peace right now.

But it’s more than that. Hours and hours online obsessing over Facebook and Twitter feeds, seeking new ways in which the world might end. It’s not hard to find. In fact, it’s overwhelmingly everywhere. Tom Price was confirmed as I slept as Secretary of the Department of Health and Human Services and supports repealing ACA, as well as messing with Medicare. (I have strong opinions on the benefits of ACA, so I already knew this administration would be pissing me off there.) Betsy DeVos, who supports diverting public funds to charter schools through vouchers instead of investing in public schools to improve them, has zero experience in anything having to do with public schools and student loans, and plagiarized during her own confirmation hearings, is now (narrowly) the Secretary of Education. (Where I went to school, plagiarism was grounds for expulsion, but I guess if you have enough money, none of that matters.) Jeff Sessions as Attorney General befuddles me. If this man was considered too racist before to be confirmed, why confirm him now? He’s also anti-immigration and anti-marijuana (even medical, which is interesting at a time when most of the country is pro, and there are overwhelmingly more states that have legalized it in some capacity than not, including recreational in D.C.).  Andrew Puzder, Department of Labor, is anti-union (and pretty sexist, too). And then, of course, there’s the Supreme Court nominee, Neil Gorsuch, who’s certainly no champion to LGBTQIA and mixes church and state in his cocktail of crap (remember the Hobby Lobby case, allowing a corporation to claim status as a person and use “their” religious beliefs to refuse contraception coverage?), which also makes him a threat to Roe v. Wade and women’s reproductive rights.

It snowballs. Because, while I am aware, there are so many different groups who need support. Immigrants. Refugees. Women. LGBTQIA. Poor people. Black people. The environment. Muslims. Jewish people. Essentially everyone except for rich, white, powerful men. And the ramifications of this are so far-reaching–so lasting, especially when you look at the Supreme Court nominee’s age. And I want to help. I want to help everyone. And I want everyone to care. And I can’t understand why they don’t care. And I can’t understand how anyone can support this nonsense. And it spirals out of control. And now, here I am.

And next week, seeking psychiatric help, too, as my doctor believes I have more than depression mixing with the anxiety.

I’m scared. I know I need help. I know I’m now beyond my ability to cope on my own. And if I don’t get help, I’m useless to everyone. But I already feel the pressure building of being a failure–of cracking under the pressure when we’ve only just begun to feel it. Of letting everyone down. And it’s stupid and silly, yet it persists. 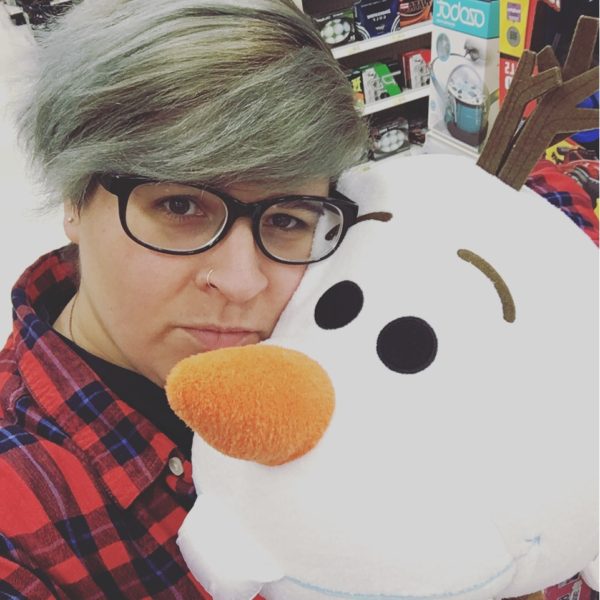 does Olaf really give warm hugs?

I’ve agreed to let go of my Facebook timeline for the time being. To work harder on opting for physical newspapers over digital for my news, so that I can leave it behind when I’m done, instead of carrying the burden with me. I’m **trying** so hard to limit my Twitter time, because it is triggering more anxiety right now. And all of this seems impossible, given the fact that I’ve devoted the last 6 years to building a business relying entirely on internet presence and social media interaction. But, truth be told, anxiety and depression have also robbed of me my love for this very same business. I can’t seem to get back in the groove, even though this used to be my best coping mechanism for the craziness of the world. And I want to be back in that place.

I’m broken. But I’m working on it. Please, be patient with me.