Disclosure: I developed this recipe for Jalapeño Moscow Mule in partnership with TABASCO, who compensated me for this post. All opinions remain my own. Thank you for supporting the brands that support Poet in the Pantry! 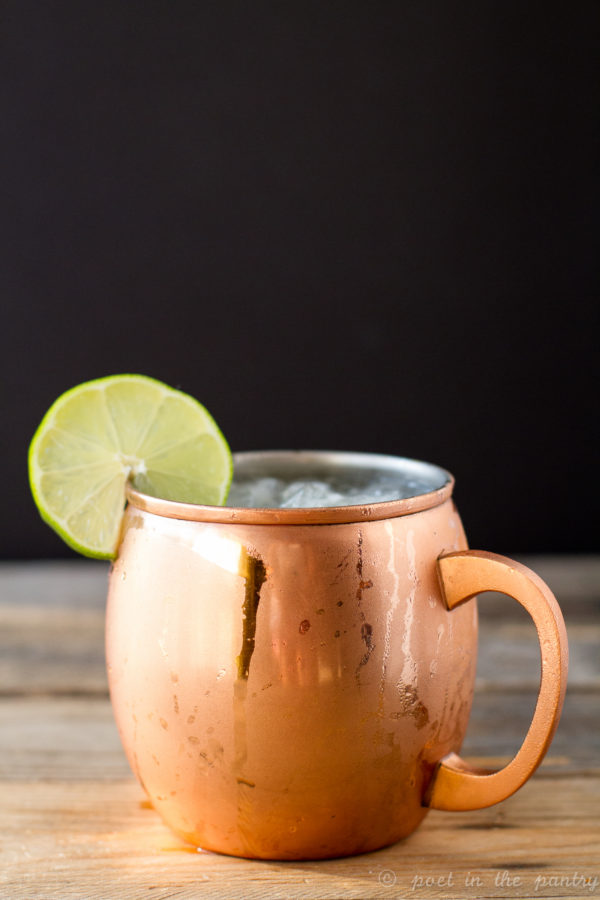 The last couple of months have been quite the whirlwind of adventures. While this has been rather lovely for me, in that I’ve had ample opportunities to escape the mundane and explore the world, it also has left me short on time to share the details of all those journeys with you. Today, I’m remedying that by taking you back to my trip to Avery Island, Louisiana, where I jetted in April to check out the McIlhenny Co. headquarters. 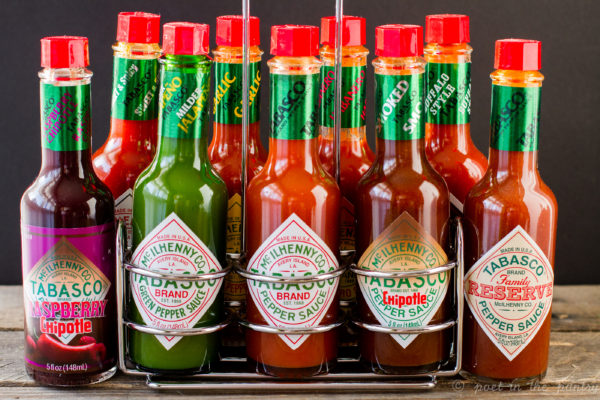 As of April this year, I became a TABASCO Tastemaker!

I had no idea there was so much story behind that iconic bottle of red sauce you find on just about every restaurant table. And it all starts with Avery Island, a 2200-acre salt dome that rises up from the surrounding marsh and bayous to not only house the McIlhenny Co. offices, factory, Country Store, and Restaurant 1868, but also provide part of the recipe for the sauces that come from this island. The salt in the recipes for TABASCO sauce? Yup, some of it comes from the mines right there on Avery Island. Talk about terroir! 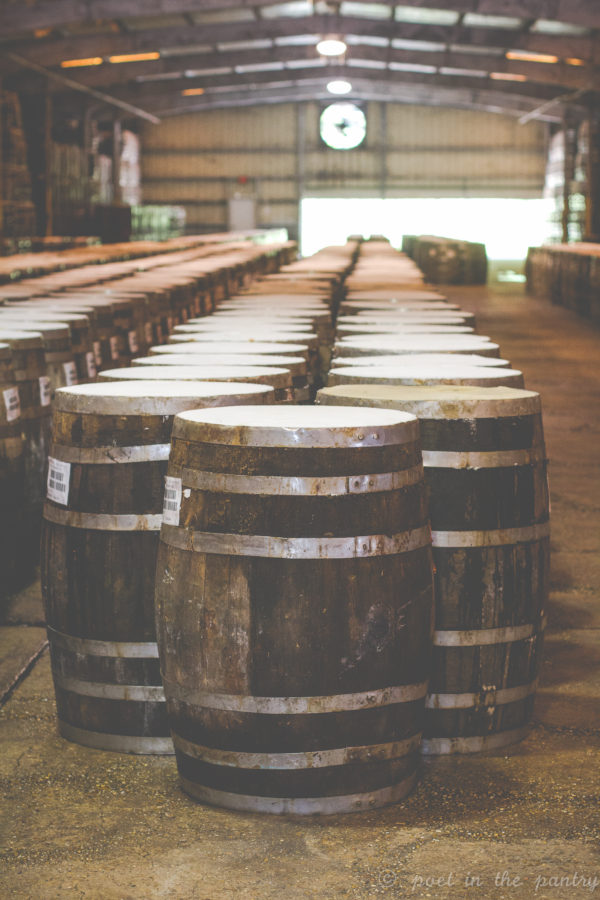 The recipe goes back to a post-Civil War notion by a financially-destroyed former banker named Edmund A. McIlhenny–husband of Mary Eliza Avery and son-in-law of Judge D. D. Avery, for whom Avery Island is named. McIlhenny started in 1868 with the original red sauce, which was aged in stoneware (the white oak barrels came later). From 1869 to 1890, he produced 350,000 bottles of his sauce, which was distributed throughout the U.S. and overseas. (One of my favorite parts of the history of TABASCO comes in the 1890s, when he utilized burlesque to promote the product!) Now? The factory produces 750,000 bottles A DAY–they’ve come a long way! 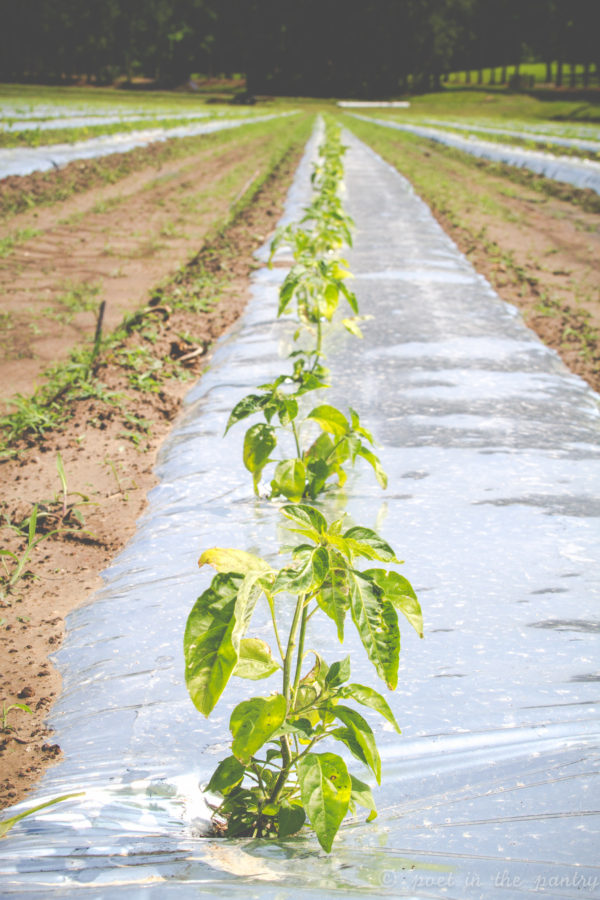 TABASCO sauce gets its name from the Tabasco pepper, the main ingredient in the original recipe, and a component in most of the sauces in the line. The Tabasco pepper is considered an ornamental variety and is very, very hot. You wouldn’t be slicing them up and sprinkling them over your food, that’s for sure! While most of the peppers themselves are actually grown in Latin America now, the seed peppers are grown on Avery Island, where they utilize methods to minimize impact to the environment while growing this sometimes-difficult heirloom variety. Their method for pest control is ingenious! A herd of sheep wander the fields, munching on the pests while completely avoiding the peppers, as they don’t eat plants in the nightshade family. They even add some fertilizer as they wander through! (I’ve heard they’re good eatin’, too, but we didn’t sample any of the herd.) 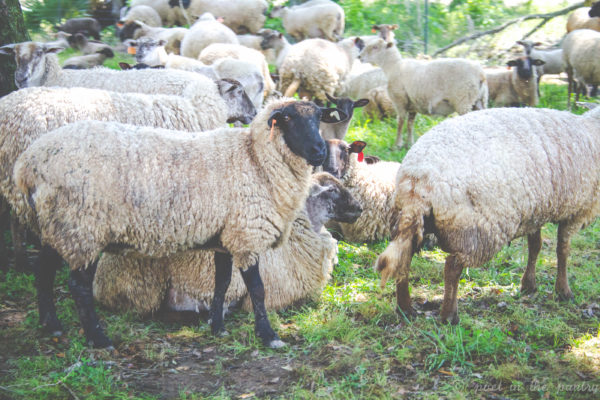 Making TABASCO sauce is not an overnight operation. The freshly-picked peppers are mixed with salt the same day they’re harvest to keep them from rotting. From there, they ferment for 6-8 months, then age in old bourbon barrels for 3 years. (The Reserve? That’s a special sauce that comes from pepper mash that has aged even longer, resulting in a condiment abundant in depth and interest, much like an aged spirit.) After aging, vinegar is added and the sauce sits in 78 mixing tanks for 3-4 weeks, stirring and stirring before the solids are removed and it’s all racked off. Each tank holds the equivalent of roughly 120,000 bottles. That’s a lot of hot sauce! 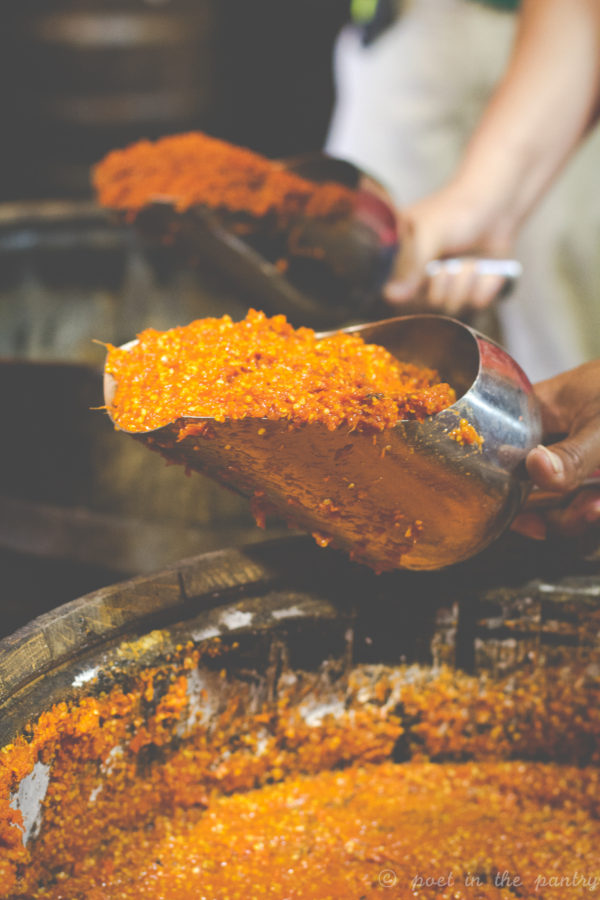 What’s truly intriguing about TABASCO and McIlhenny Co. is the people.

Or, rather, the family. Because if you live on the island in one of the 50 houses on site, you’re either an employee or family, and that line is sometimes hard to discern. Sure, there is the multi-generational family itself, with Took Osborn, Senior Vice President, and  Anthony “Tony” Simmons, President, being 5th generation in the business. (And Tony’s son, John Simmons, Manager of Agriculture, is 6th generation!) But it’s all in the way everyone relates to each other. I remember on our tour of bottling  that John knew everyone’s name. Not only that, he knew their stories. He asked about specific family members, remembered details about the employees’ lives. They weren’t just co-workers. It’s more than that on Avery Island. 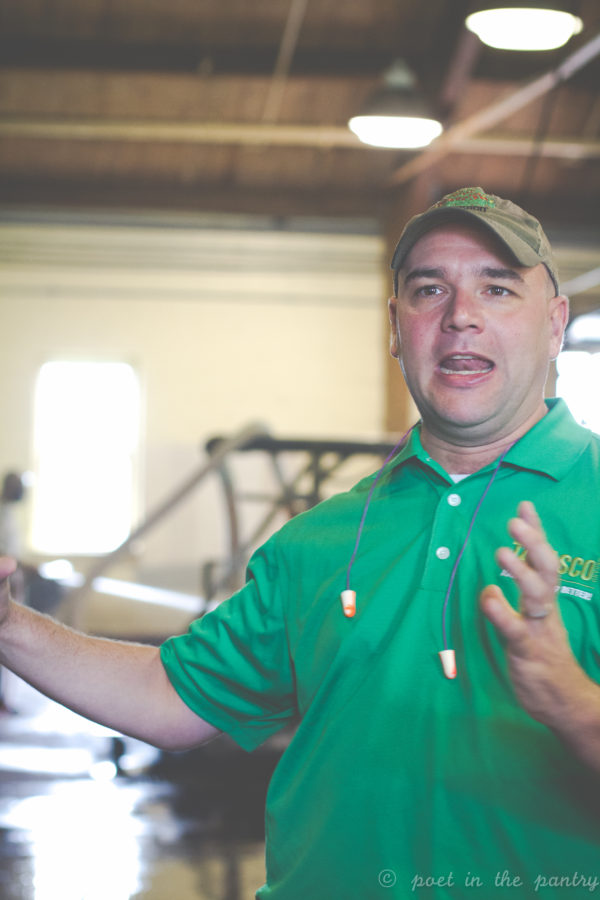 John Simmons, Manager of Agriculture and 6th generation in the McIlhenny Co., tells us about mixing and bottling

While it was wonderful getting the behind-the-scenes look at it all, I also rather enjoyed the extracurricular activities planned for our group. We ate at Olde Tyme Grocery (where I sampled an oyster po’boy!). We toured the Jungle Gardens, where we saw alligators sunning themselves, snapped photos of the Buddha statue that seems so out of place here, and yet, fits in so beautifully, and discovered the huge flocks of migrating egrets returning to the island, year after year, following the path of their descendants that E. A. McIlhenny first raised on the island. We sat down to a phenomenal dinner at Marsh House with John Simmons and his mother, Jeanie Simmons, with the courses prepared by Chef Isaac Toups of Toups’ Meatery (and Top Chef fame!)–who also treated us to a cooking demonstration earlier in the day. The cocktails with Mixologist Nick Detrich were especially delightful–so much mezcal! And who can forget the airboat rides? What a way to see the bayou! I only spent a few days on Avery Island, but they were very full days. 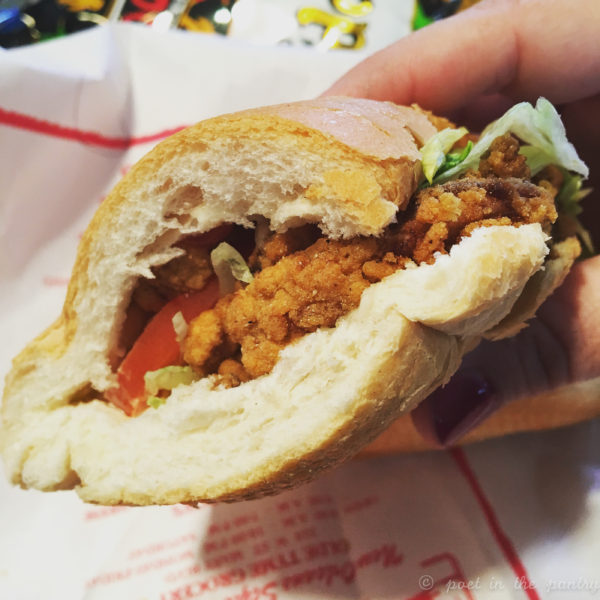 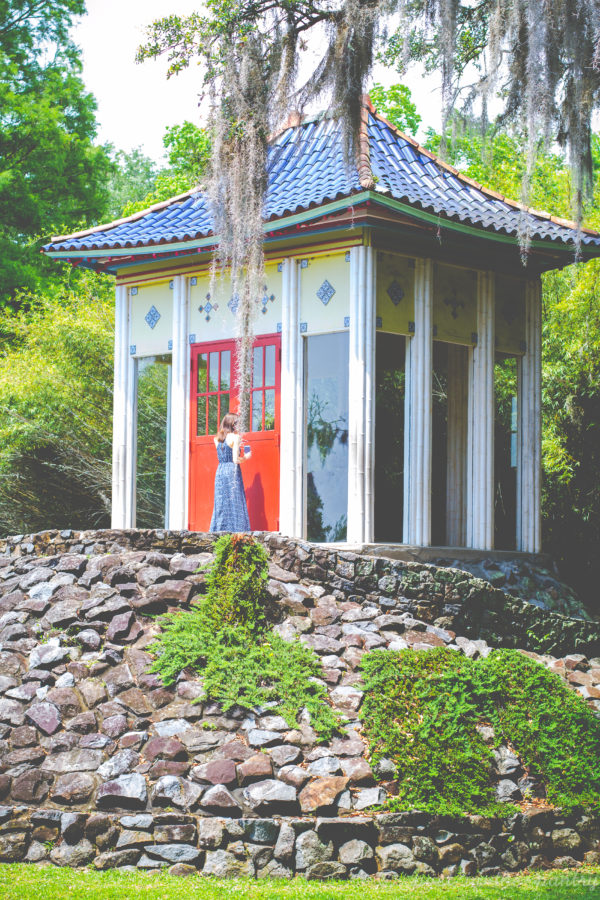 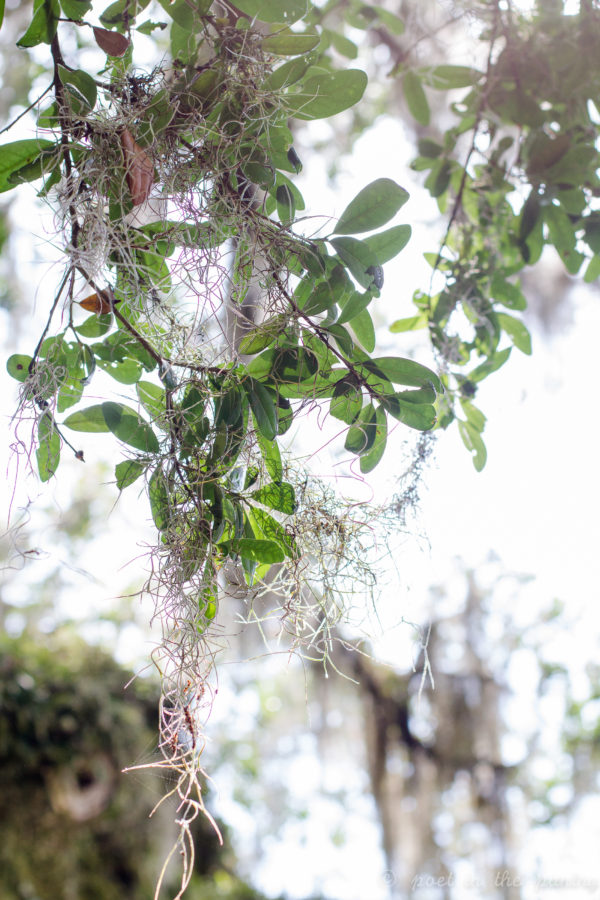 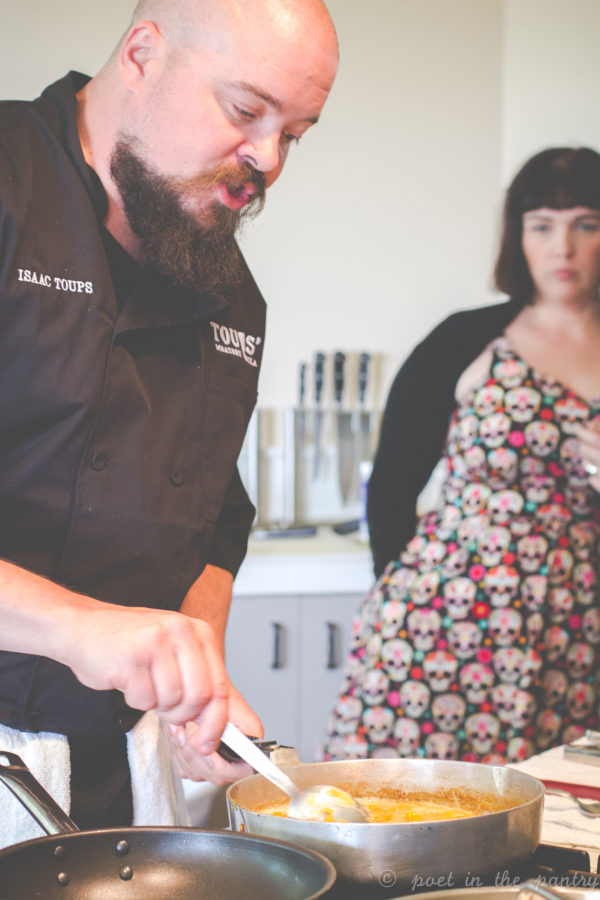 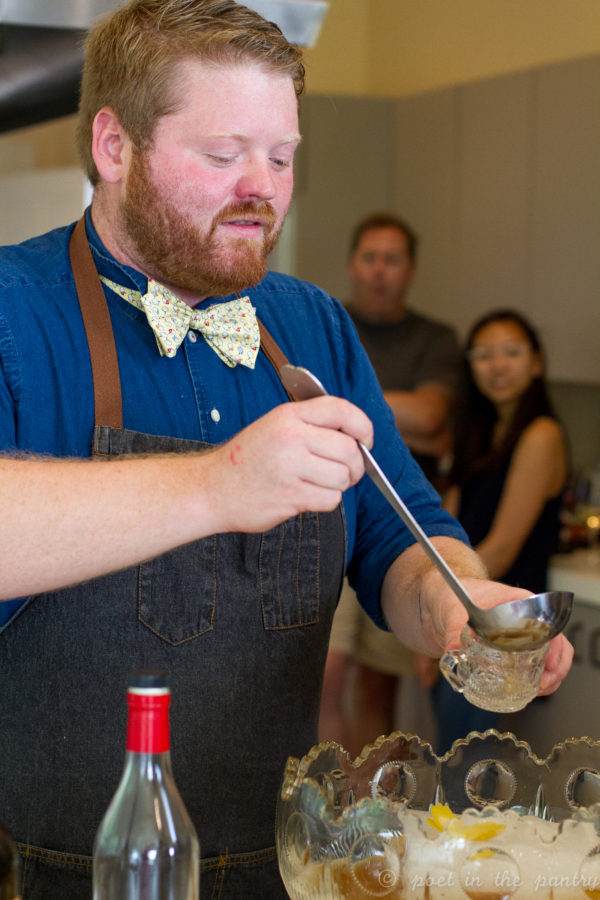 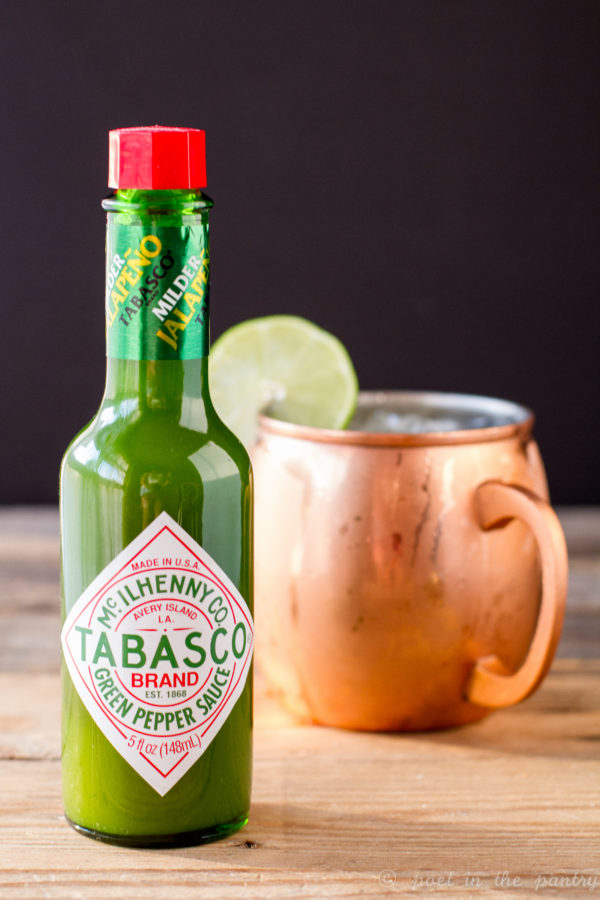 The really great news for all of you is that, as a TABASCO Tastemaker, I’ll be bringing you 4 new recipes this year featuring their core hot sauces. (I highly recommend their Raspberry Chipotle and Family Reserve Pepper sauces, as well, but those can only be ordered online or purchased by going to the Country Store on Avery Island.) 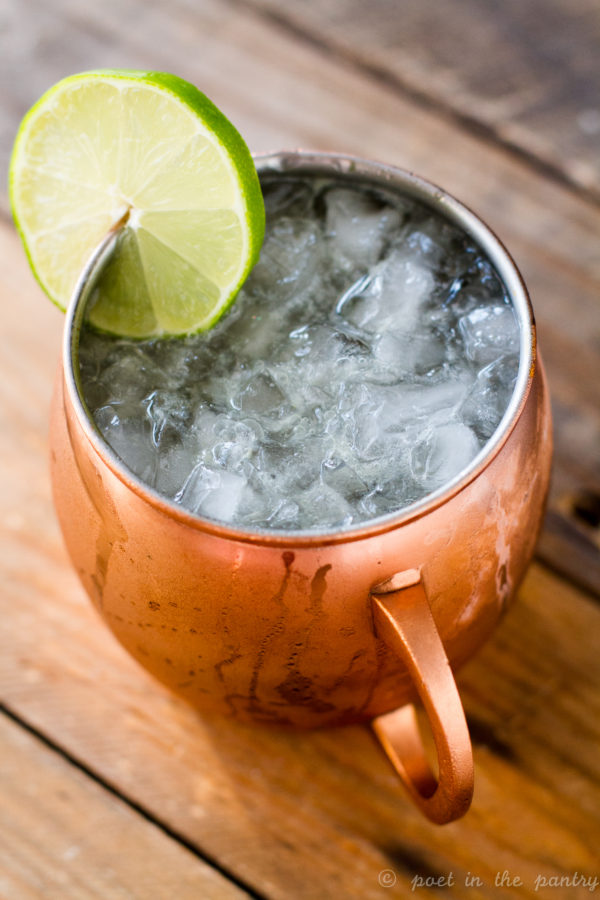 I’m starting with a cocktail…because, boy, do I need one right now. As much as I love the jet-setting life, it makes running a household difficult–especially with an emotional eleven-year-old. Balance is evading me right now. And while we had a fantastic family party yesterday for her and my son’s birthdays, the struggle is real, and it’s just about every day. Today? She didn’t want to take a shower. Sigh. 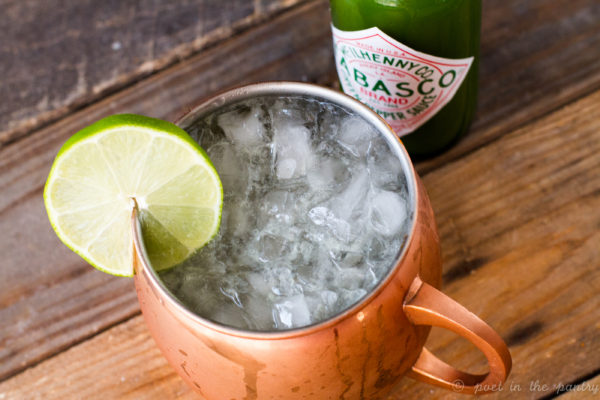 I tried a few different cocktail inspirations, but the Moscow Mule turned out the be the best-suited for a kick of spice. It’s naturally inclined to it, after all, with that ginger beer fizzing away. I’ll have you know I bought 2 mugs specifically for this recipe–I made do without them before. I’ll be sure to use them regularly now, though. Especially with the hint of heat from the TABASCO Green Pepper Sauce found in my recipe. I also played around with a version featuring the Raspberry Chipotle sauce and a shot of framboise, but it wasn’t….raspberry enough for me. I’ll have to tweak that one a bit more. It’s all good when there’s a cocktail fizzing away in your mug, right? 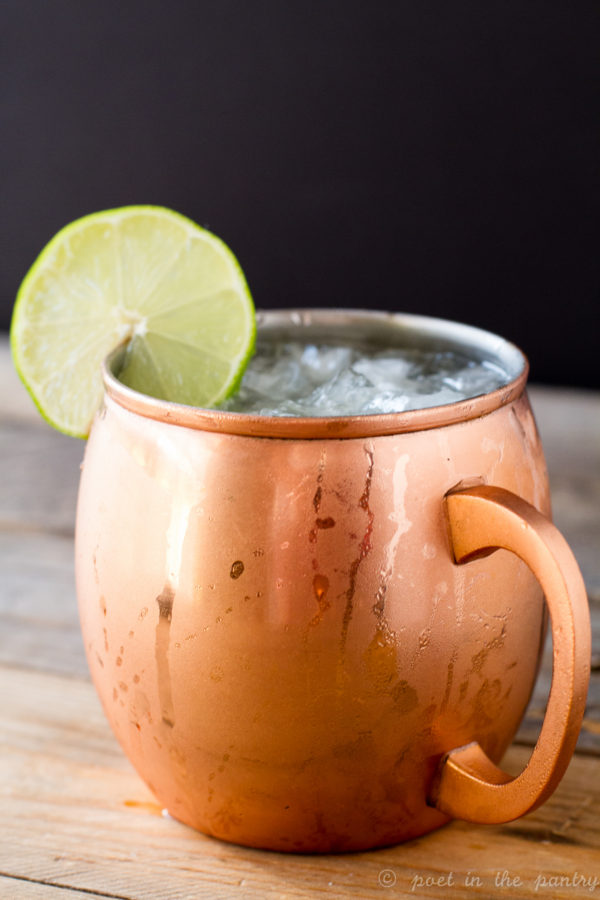