Sometimes, your destiny finds you.

When Jared Cohen realized that there wasn’t a future in his job as a poker dealer at Mohegan Sun casino–little room for growth, and certainly no retirement to rely on–he started thinking outside the box, just like his father taught him. Ultimately drawing on fond memories of feasting upon those infamous Maine baked potatoes at The Big E with his father in his youth, Cohen launched the Spuds Your Way food truck at a local gas station on April 1, 2013. This was no joke. 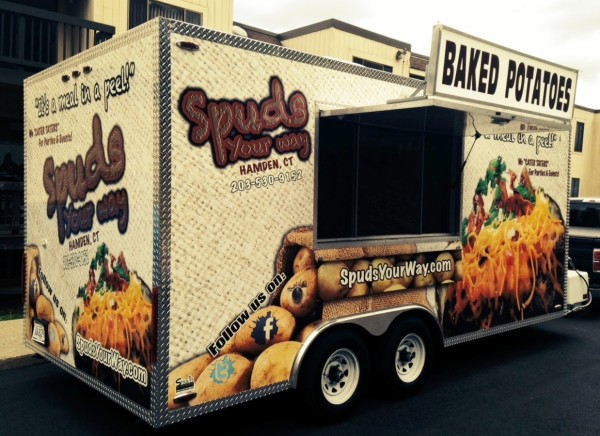 photo from Spuds Your Way

Cohen never saw himself in the food industry. But the idea of being in business for himself was so intriguing that he couldn’t resist.

Understanding the limitations of a bricks-and-mortar establishment, Cohen decided to take his show on the road, going where the people are to bring them his meals in a peel. Signing a lease at a static address would be risky. A food truck afforded more flexibility; if the location doesn’t work out, you can move to another one, with your base of operations doing double duty as a moving billboard, all the while. It was a no-brainer.

But running a food truck comes with its own set of challenges. “Dishes must be done on the vehicle as opposed to being done in a full sink with endless amounts of hot water,” Cohen explained to me. “Also, just having vehicles limits you on the amount of food you can stock, due to limited space.” Most concerning of all is the operation of the truck itself. If it’s out of commission, you’re out of work for the day, and that’s a big problem. Despite all this, Cohen seems content with his decision, and hopes the next five years will bring another truck to the road, if not a small shop or kiosk.

What will you find when you walk on up to the truck? Idaho potatoes served your way, of course, with butter, sour cream, bacon (yes!!!), chives, and/or shredded cheese. Or go full tilt with a Supreme Baked Potato, which adds a little bit of protein: your choice of Steak, Grilled Chicken, Burger, Turkey Burger or Buffalo Philly Chicken. Don’t feel like a spud today? There are Turkey Burgers, Hamburgers, Cheeseburgers, and even a Buffalo Philly Chicken Burger, all served on potato buns. Hot dogs and grilled cheeses round it all out, with vegetarian options also offered for the non-meat-eaters.

But why more than just potatoes?

With a tagline like “it’s a meal in a peel,” you’d think he’d stick with an all-potato menu.
Cohen’s response is that of a smart business man: “I want to appeal to all age ranges. Offering just potatoes is great, but we would lose clientele if that is all we offered. At certain events, burgers sell better than the potatoes, and the same could be said about grilled cheeses at certain events. Some people are allergic to potatoes but still want something to eat. The main idea is to never lose a customer!”

Where can you find Spuds Your Way?

In the summer, they’re often parked at local farmers markets. Weekends are filled with local events, with Spuds Your Way continuing to go where the crowds are. The best way to find out is to check the Spuds Your Way Facebook page or Twitter feed. The truck is also available for catering parties and private events.

Or come to The Desultory Theatre Club‘s Hardcore Halloweenie Burlesque and Variety Show on Saturday, October 24, 2015, at Hardcore Sweet Cupcakes, where Spuds Your Way will join The Green Grunion as the official food trucks of the event. Grab a spud and take a seat. It’s a show you can’t miss!