These delightful pecan shortbread bites are just the right size for a little bit of indulgence any time of day. 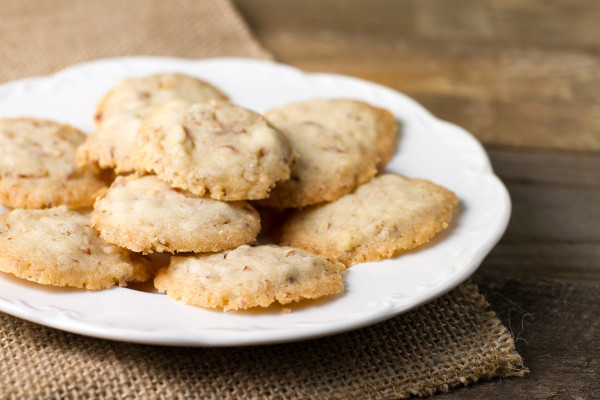 The world blurs, spinning out of control, and she grasps for the solid wood of the railing to keep from reeling down the stairs. Instead, her hands bounce off the cool plaster and she is airborne, propelled backward. Oh, no! Not again! she thinks as she braces for the hard impact of the bottom of the stairs. It doesn’t come. Bewildered, she opens her eyes and sees nothing but black. Cold, empty, bottomless black. She drifts like a leaf, then carefully, as if placed like a delicate tea cup, she finds herself on an ancient wooden floor beaten into submission by the stomping of a thousand boots. Magenta and orange light emerge from the east and her eyes begin to focus on what’s around her. Surely she must have knocked her head on the foundation during the fall, for how can she possibly be here in a tiny croft with a fire raging in the hearth, the smell of baking bread wafting to her eager nostrils? She hears someone humming from another room, contentedly going about their tasks, but she cannot see the source of this melody. There are no photos in this room, no indication of whom the inhabitants of this home are–and no outlets either. In fact, she does not find any electronics in this peculiar place. What an odd discovery in this day and age.

She hears the floor boards sigh and moan under the weight of the hummer, now moving across them in the other room. Should she hide? Where would she go? She has no idea what’s happening, but is starting to wish for the aches and pains of a fall down the stairs instead of the confusion of this fall into oblivion. She creeps backward, crab-walking ever so slowly, keeping an eye on the doorway at all times, then accidentally knocks over a tiny table she did not see.

Hello? Is someone there? a female voice inquires. The floorboards creak and crack as footsteps move faster across them. In the doorway appears the source of the humming–a blue woman with vibrant green hair cascading down her back. Around her billow layers and layers of skirts in every shade of blue imaginable. In her hand, she holds a rolling pin, ready to defend herself. But her hands are strange as well, with only 2 appendages that are more like tentacles than fingers. A single black eye in the center of the face peers at her, inquiring.

Where the hell am I? she thinks. Then her head hits the floor. 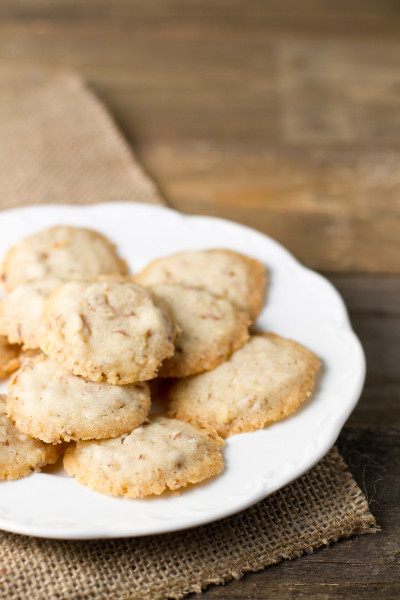 I actually did fall down the basement stairs 2 months ago. I lost my balance at the top of the stairs and, when I grasped for the security of the hand rail, it flopped instead, seeing as it was detached from the wall at the top. It was an incredibly painful experience tumbling all the way down and while I initially thought I miraculously escaped any ill effects to the noggin, despite whacking it on the foundation at the bottom, a few days later, I started having dizzy spells and feeling nauseous. I spent an uncomfortable hour in the ER answering questions like Did anyone push you down the stairs? Do you want to hurt anyone? Do you want to hurt yourself? and was diagnosed with a concussion. The next few days lying on the couch doing nothing–brain rest–were incredibly boring. I’ve had a fear of those stairs ever since.  This week, my husband fixed the railing so it can once again be relied upon. I’m still avoiding the stairs. 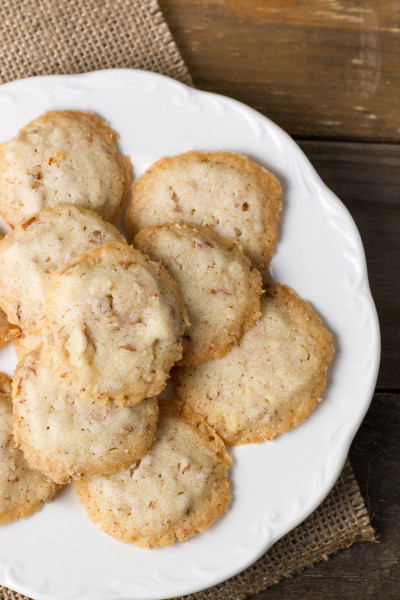 These cookies were intended to be cute little bites of wonder, like the Holiday Shortbread Tidbits on Land O’Lakes’ website. Instead, they spread, and even after attempting to chill the dough to control the circumference, they would not be contained. It wasn’t until the next attempt at them that I realized I used too much butter. Instead of lamenting the loss, I focused on the joyous discovery of a delightful crispy cookie that is just the right size for a bitty bite. A little tidbit, here and there, to satisfy a grumbly tummy without overdoing it. Serendipity! 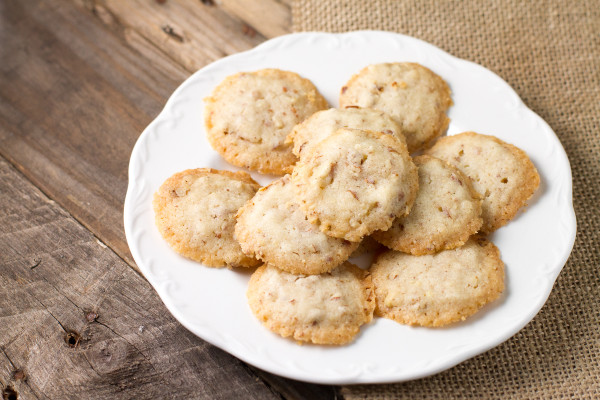 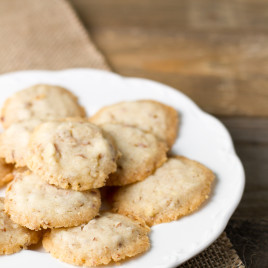 These cookies have a higher butter to flour ratio than you'd normally see. It was an accident at first, but they tasted so great that I decided to keep them that way. They get a wonderfully crispy texture while retaining all the richness of that butter. Fabulous!