Disclosure: This post contains Amazon Affiliate links. Purchasing products from Amazon.com through these links will contribute to compensation earned by this blog. 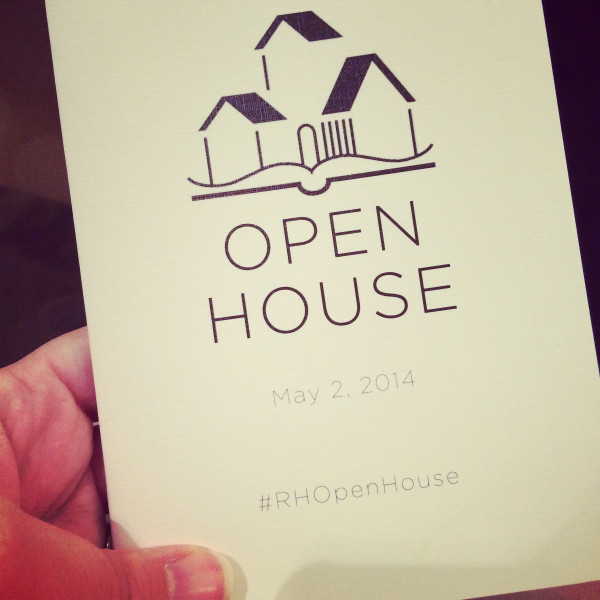 You may have guessed it already, but I’m a book lover. Before kids, I would stay up all night reading, so engrossed that even sleep couldn’t come between me and the next page. Since having my kids, my reading time is far less plentiful–as is my ability to stay up all night–but I still love escaping into the worlds created by authors, living someone else’s life for a little while. So when Kim of From Left to Write told us that Random House would be hosting a spring Open House, I signed up immediately to attend. I knew it would be worth the $55 price of admission! 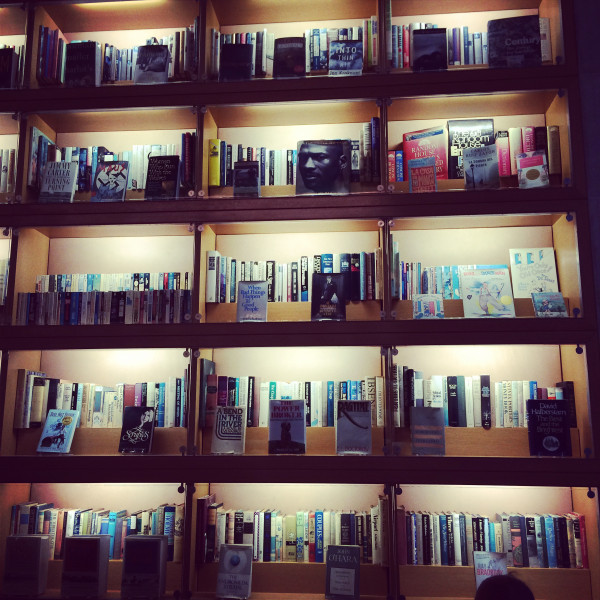 I met up with Caroline of Taste Love & Nourish at Penn Station and we worked our way up Broadway to Random House for the big event! We were greeted in the book-lined lobby, given our credentials for admission, and sent up to the 2nd floor to gather our limited edition Lands’ End tote bags full of–what else?–books! Including Stirring The Pot by Jenny McCarthy, who would be speaking during the first panel. We caffeinated ourselves and grabbed yogurt parfaits made with KIND bars to fortify us for the sessions. 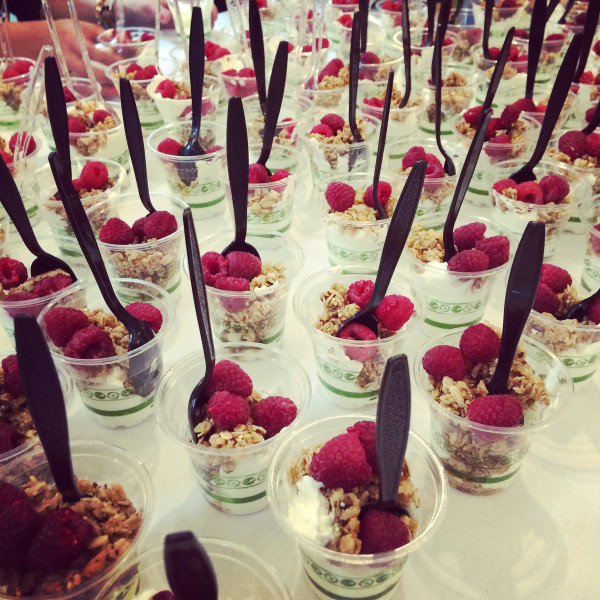 Then it was time to take a seat and hear the first panel. I knew this wasn’t Jenny McCarthy’s first book–I had read Belly Laughs: The Naked Truth about Pregnancy and Childbirth

and Baby Laughs: The Naked Truth About the First Year of Mommyhood

when I had my kids and they were, indeed, full of laughs. What I didn’t realize is that Stirring The Pot is actually Jenny’s 10th book–an amazing accomplishment! She shared that she’s always been candid and very honest (um, yup! that’s part of the attraction of her books!). It doesn’t seem like there’s much that’s off limits for this former Playboy bunny and Singled Out game show host! Which was kinda nice because she also shared with us her engagement story, which was absolutely adorable. Sounds like she has made a fantastic pairing with Donnie Wahlberg! The most important thing I took away from her session was when she said any time you fear something, that is your life purpose…that’s the thing you should be doing. Some excellent food for thought. 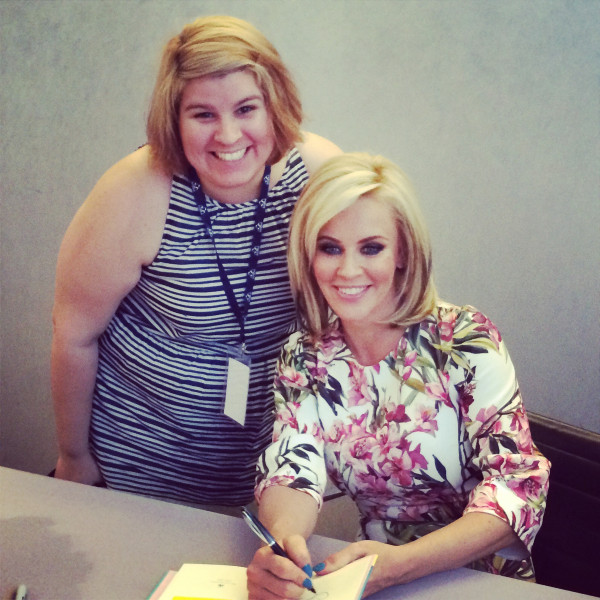 We were given 15 minutes after the first panel to have Jenny autograph copies of her book. But the line was REALLY long, so Caroline and I refueled with bottles of illy‘s issimo products provided for us in the break room. The mochaccino was divine! Just what I needed to try to gather the courage to talk to Jenny when we joined the end of the book signing line. (Though apparently that didn’t help keep me from rambling on like a buffoon about how sweet she is and then looking like a total dork in the photo they snapped for me!) 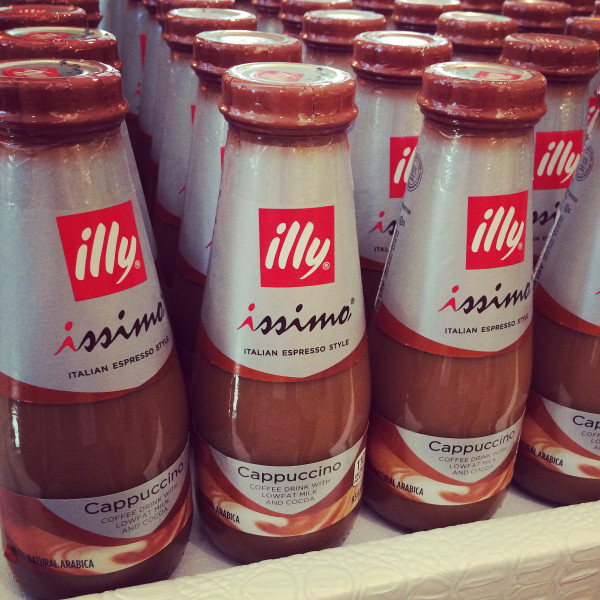 Caroline and I joined the Storytelling in 140 Characters panel when it was already in progress, which was a bummer because I was really looking forward to it. Being social media mavens, I was quite interested in what they had to say about the medium. It appears there is now a movement for Twitter fiction. I knew about Eat Tweet: 1,020 Recipe Gems from the Twitter Community’s @cookbook

a compilation of Twitter recipes, but I hadn’t heard of Twitter fiction before. I will have to investigate this further! The gems of this panel, though, were Emma Straub and Gary Shteyngart, who were HILARIOUS. Like Straub’s use of Twitter to get whisky delivered to her. Or her mission to get Donnie Wahlberg to answer her tweets (including Andrew Fitzgerald‘s call to all of us to tweet to Donnie Wahlberg about this)! Shteyngart, on the other hand, has found that dog pictures seem to be the way to get people to open up. In the end, it’s about interaction. Twitter is a conversation–an extension of community–and should be used that way instead of merely for self-promotion. After all, would you go to a party and just keep blurting out stuff about you? Buy my book! Make my recipe! Love me! Balance must be found. 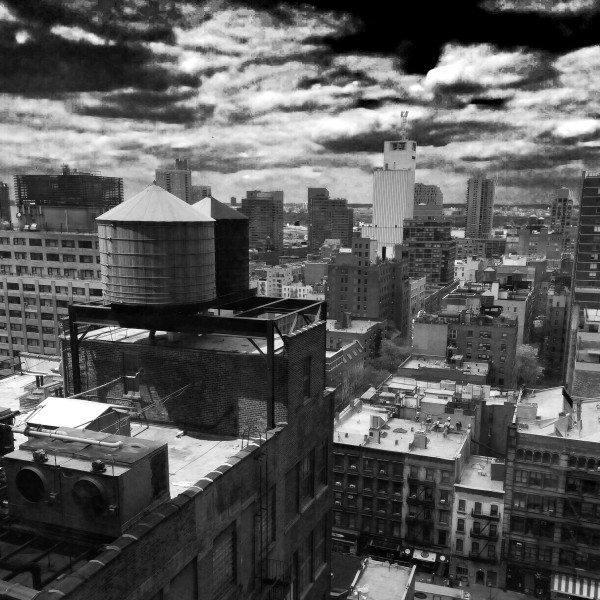 Lunch was served on the 14th floor, accompanied by quite the view! We selected the boxes filled with ‘wichcraft chickpea hummus sandwiches (seasonal vegetable salad, tahini, za’atar & mint pesto on multigrain bread), potato chips, fruit salad, and chocolate sandwich cookies, which were superb–and very filling! Then we returned to the 2nd floor for the next session with Panache Desai.

Honestly, I wasn’t looking forward to this panel. I expected a self-help guru who would be self-righteous and annoying. Instead, Desai was extremely likeable. He shared his high school experience–Mean Girls on steroids–and how he never fit in. He got along with everyone, but he never had a place, which could have been exactly my high school experience he was describing. You turn yourself inside out for love and acceptance and it never comes. Yup. Desai simplified it quite beautifully: conformity=death. And when you’re moving away from your soul signature–when you ignore who you should be–you will be miserable. There were a lot of hands raised in this segment, because most of us (if not all) could relate to what he was saying. I will definitely be picking up his book, Discovering Your Soul Signature, and taking his advice to practice the divine art of chilling out–meditation. It’s been too long. 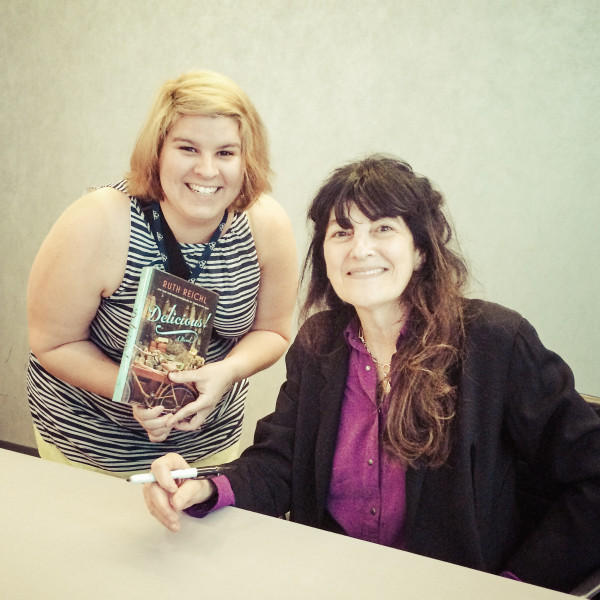 Ruth Reichl was my main reason for attending the Random House Open House! (Naturally!) She was there to discuss her first fictional work, Delicious! Reichl was a well-known restaurant critic and editor-in-chief of Gourmet magazine for 10 years before it shut down in 2009. Her memoirs are quite popular, though I haven’t read them yet. Her first book–a cookbook titled Mmmmm: A Feastiary–was published in 1972. What amazed me the most about her discussion was the relationship she has with her editor. She gushed about how wonderful Susan Kamil is, which I loved hearing because there was a time in my life (not so long ago) when I really wanted to become an editor–and actually applied for jobs at Random House! (It’s probably for the best that I never heard anything back on those applications…) After, we were able to purchase our own copies of Delicious! and have them autographed. Caroline suggested we give her our business cards, so I did! She actually said she liked the name of my blog and pocketed the card. I couldn’t stop shaking for 5 minutes after (does this mean my biggest fear is talking to celebrities? I’m not sure I can make a career of that, Jenny McCarthy!). 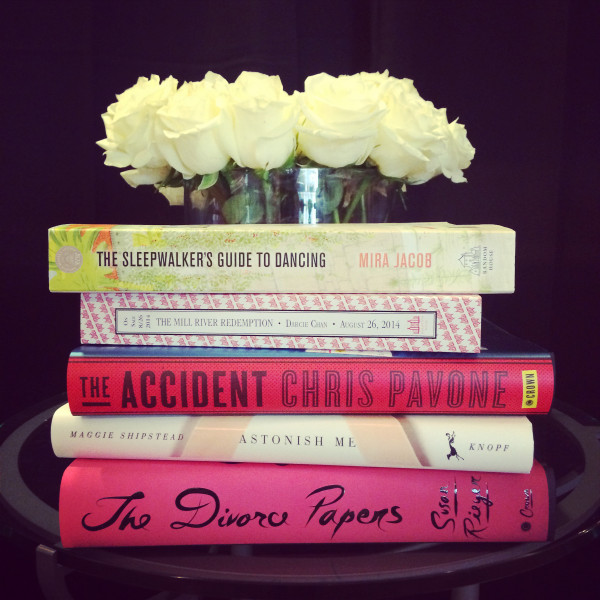 The last panel was about great summer reads. Two of the authors–Susan Rieger and Chris Pavone–wrote books I recently read for From Left to Write: The Divorce Papers and The Expats. My take-away from this session was Chris Pavone’s strategy for when he gets stuck writing: he starts writing about things that won’t ever be in the book, like a character’s mother’s life. It’s an escape for a little while that will actually be beneficial to the project in the end. Pavone also felt it was important to acknowledge the hard work of the hundred or so people who make a book possible. He said that authors usually only interact with maybe two people in the process, but there are a lot more people in that village who make the magic happen, and they should be recognized. He’s known for thanking them in his books. 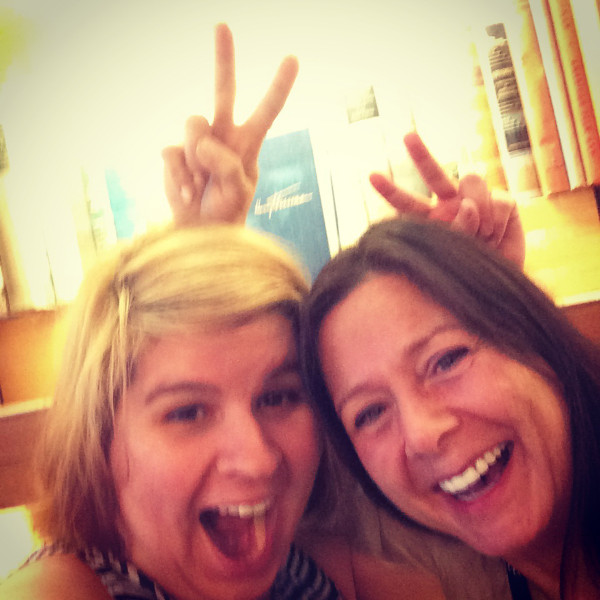 The sessions closed with a cocktail hour, during which there were samples of Di Palo’s cheese (oh, yum!) and glasses of wine for all. There was actually a lot more food than just cheese, but the room was quite crowded and I didn’t feel like fighting the masses to inch my way over for a bite. Caroline and I planned on going out for a drink after anyway, so we hung around for a little bit, drank glasses of wine, ate our cheese, charged my phone, and then left. No fanfare, just happy hearts. And silly selfies taken in the lobby, of course. 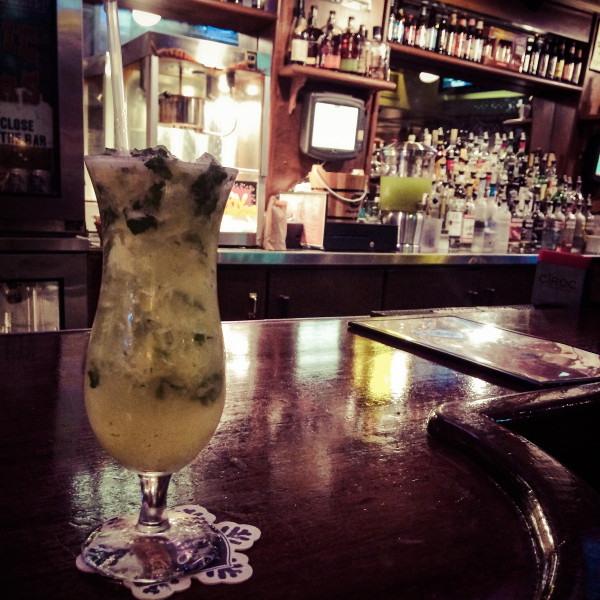 I wanted to bring Caroline to Playwright Celtic Pub‘s rooftop bar–I went there last Saturday with my sister when we were in NYC to see a show–but it was closed for a private party. So we moseyed on over to Virgil’s Real BBQ in Times Square instead. I discovered Virgil’s a few years ago based on a friend’s suggestion and have found them to be reliably good. The bar wasn’t really busy, but it was also nice not being herded like cattle. We had time to sit back, sip drinks (I had a pineapple mojito), and catch up a little more. Ahhhh… 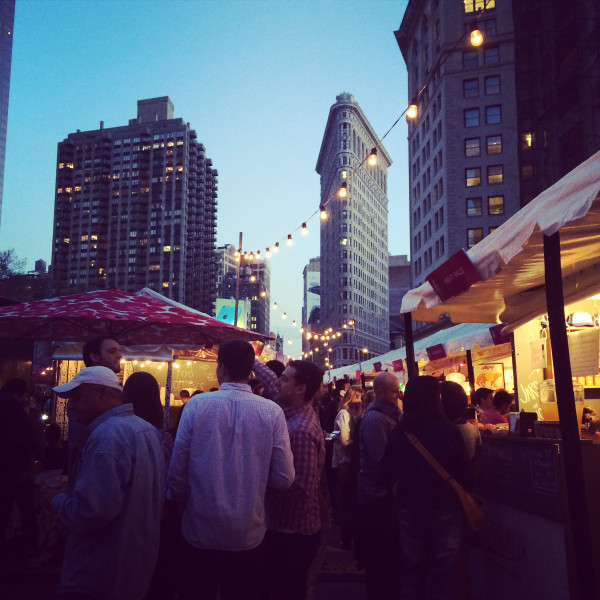 After I dropped Caroline off at Penn Station for her return train, I wandered. I happened upon Mad. Sq. Eats–which was hopping–and had a nice tour of the typical sights: Flatiron Building, Empire State Building, New York Public Library, and Chrysler Building. Then I shuffled into Grand Central Station with my aching feet in shoes not made for walking, plopped myself down on a seat on the train, and started the journey home. It was a long day, but a satisfying one, too. I can’t wait to go back!