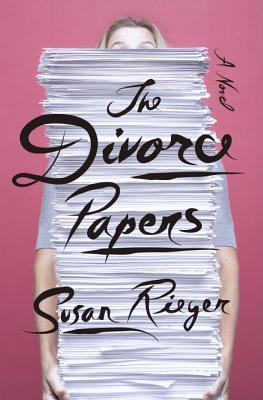 This post was inspired by the novel The Divorce Papers by Susan Rieger. Young lawyer Sophie unwillingly takes her first divorce case with an entertaining and volatile client in this novel told mostly through letters and legal missives. Join From Left to Write on March 18 we discuss The Divorce Papers. As a member, I received a copy of the book for review purposes.

What do we leave behind when we’re gone?

It’s kind of a morbid question, I know. But hear me out. What would someone find out about us someday if they ever went looking? It used to be the legal papers were all that remained. The things you’d find in your Town Clerk’s office: birth certificate, marriage certificate, deeds and mortgages, (god-forbid, foreclosures and lis pendens), name change certificates if you divorced and reverted to your maiden name… Who were your parents? Where were you born? Which houses did you own? How much were they assessed for? How much did you pay in taxes? Did you ever get any Zoning variances or special exceptions? Was that deck constructed with a Building permit? These are the remains of a life. These are the building blocks, residing eternally on record, that the people who come after us will have available to them to reconstruct our lives. Or, it used to be that way. Because anyone who uses the internet knows that the internet is forever. And there’s a whole lot more of our lives preserved now, whether we like it or not.

There’s a meme going around on the internet that goes something like I’m so happy I was young and stupid before the internet. One moment of insanity can now be captured for all to see and even if you delete it from one of your multiple social media accounts, that doesn’t mean it goes away. There are many heads to cut off this beast. And you never really know who has shared your content, who has right-clicked and saved something to their own computer for future use. You just don’t know who is reconstructing your life, even as you live it. And it’s a little frightening, when you think about it.

Someday, when my daughter is a teenager and starts wondering who her parents are, she’ll have more than a yearbook photo and silly farewells trapped in a book that hasn’t been cracked in decades at her disposal. She’ll be able to see every selfie I’ve taken in bars with friends. She’ll have access to the dream vacations and desired home renovations I’ve collected on Pinterest. And all those Twitter chats I’ve participated in will show her how boring her mom can really be. There will be so much information at her fingertips that she’ll likely get bored and move onto something more interesting, like writing her name in hearts with the latest boy band object-of-desire’s last name tacked on to hers. Life is no longer summed up; it’s transcribed. The full record is there for review, should anyone want it. Though I’m not sure who would want to rummage through it all.

More is not better. Sometimes, more is just more.

And now, a life that once had only its high points or highlights on file for future generations’ perusal will bog down the system with every inane thought and action that ever happened. Carrie has a case of the Mondays. Carrie is at Starbucks. Carrie went to the bar with her friend Crista. Carrie liked Brian’s picture of his lunch. It’s all there. And in some ways, it makes a life a little less special.

What are your thoughts on a life viewed through the papers and information left behind?