Saturday morning we re-convened with our hosts at The Culinary Institute of America for our day of learning and good eats. Breakfast was served from the Jones Dairy Farm kitchen in Farquharson Hall, a space straight out of Hogwarts. No house elves here though–just students and their instructors hard at work at what they love. 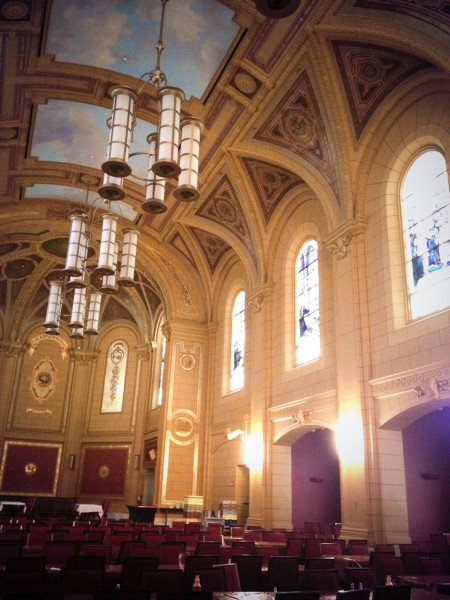 Rick Lowry, Executive Vice President, welcomed us and gave us a little history on Jones Dairy Farm, maker of my favorite breakfast sausage. Did you know that Jones Dairy Farm has been around for 125 years? On top of that, it has been 100% family-owned for its entire history! That’s amazing! Milo Jones, a government land surveyor from Vermont, founded the farm when he moved to Fort Atkinson, Wisconsin in 1838. He and his wife, Sally, worked a 500-acre dairy farm that was self-supporting, including having its own brickyard, tannery, and blacksmith shop. Their son, Milo Cornelius Jones, was expected to take over the farm in the 1880s, but he was plagued with debilitating rheumatoid arthritis. This setback was the catalyst for what Jones Dairy Farm is known for today: sausage. Milo C. Jones began selling sausage made from his mother’s recipe and the rest is history. By 1910, Jones Dairy Farm sausages were being shipped nearly nationwide. Today, the recipe remains almost unchanged from its original form: pork, salt, and spices. They leave out the MSG, chemical additives, gluten, and other common allergens found in other brands of breakfast sausage. This must be why it all tastes so good!

So what does Jones Dairy Farm have to do with The Culinary Institute of America anyway? Surprisingly a lot. 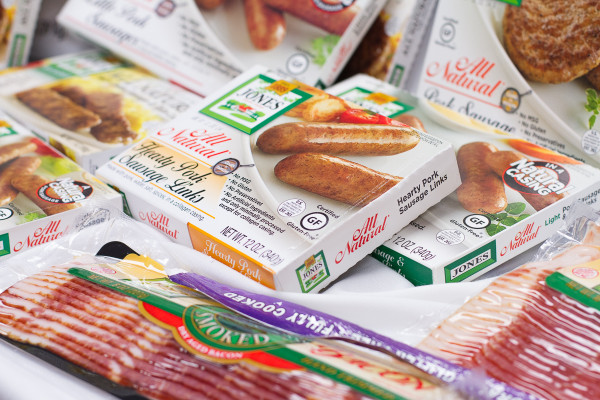 Philip H. Jones, a Paris-trained chef and President of Jones Dairy Farm since 2001, gave The Culinary Institute of America a substantial amount of money to establish the Jones Dairy Farm Endowed Scholarship fund. This fund makes it possible for three students per year to receive aid toward their pursuit of a Bachelor of Professional Studies degree in culinary arts management. What a huge difference that makes! Recipients must be the cream of the crop–they have to excel academically, demonstrate community service on campus, create a recipe utilizing Jones Dairy Farm products, and explain how Jones Dairy Farm’s history may affect their future in the culinary world. That’s a tall order to fill, but it ensures they are helping the best of the best fulfill their culinary dreams. 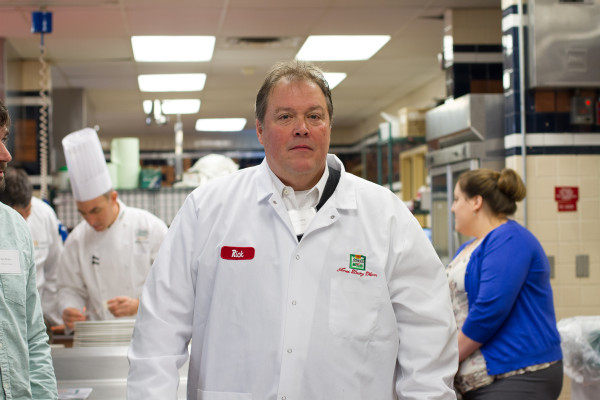 After breakfast, we moved into the teaching kitchen. There, we received a bit of a pork anatomy lesson. Thank goodness we weren’t expected to perform surgery after! Rick told us about how sausage is made, let us examine different kinds of casings that are used, and showed us where the piggy parts we love come from. He shared their dry aged bacon–a rarity, as it takes a lot longer to produce, but it also is a heck of a lot more flavorful for that time investment. Mmm… bacon. He also showed us one of the more disgusting things I’ve seen in my life–mechanically-separated turkey meat. Or white slime, as some call it. This mushy slurry is an assortment of all the leftovers when the bones have been picked nearly clean–and other unscrupulous companies will not hesitate to use it in their products to cut costs. Bottom line: you get what you pay for. Jones Dairy Farm is not the least expensive in the grocery store for a reason: their goal is to produce the best quality product they can. Cutting costs results in cut quality, too, and none of us wants that to happen. 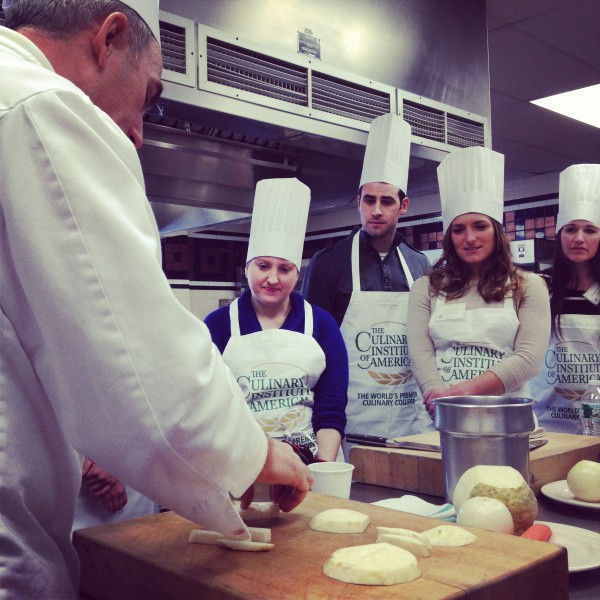 We followed up the pork lesson with a knife skills class with Chef Justin Ward. I have been wanting to take a knife skills class forever. I manage just fine, but there is no art to what I do with a knife; it is as utilitarian as possible. Chef stressed over and over again that stability is key. You need to trim down what you’re cutting until it will sit securely on your cutting board; you don’t want a carrot to roll while you’re cutting. That’s how accidents happen. A small part of me resisted at first–my frugal mother taught me not to waste anything and all that paring away to a rectangular shape made me a little nervous. But Chef assured us that what we cut off could be saved for making stock–no waste here. 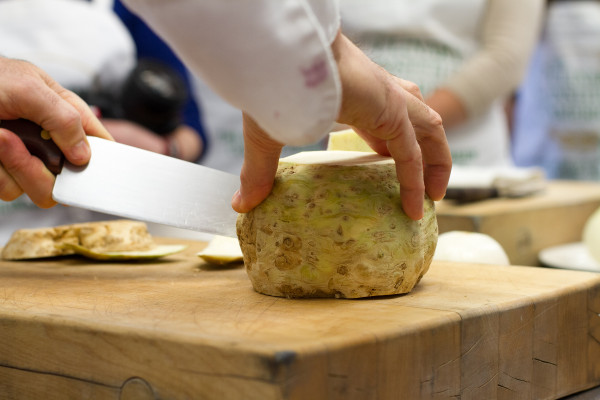 Each of us had a station set out for us equipped with a massive cutting board, a chef’s knife, an apron, a towel, a toque, and a plate with a single carrot and a lonely, already-peeled onion. Our challenge: to cut our carrots into 4 cuts: batonnet, medium dice, julienne, and small dice. For the onions, half needed to be julienne and the rest was to be diced. I managed just fine, but I panicked a little when I was being watched by one of the culinary students. She offered encouragement and was very positive–I’m just not used to having someone watch me work a knife. Regardless, I’m pretty happy with the results: 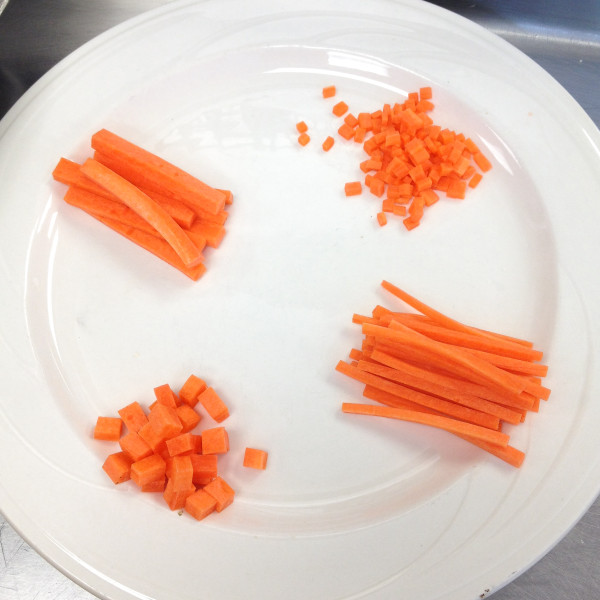 Next came the ham. Ham! Makes me think of that claymation pirate movie that my kids love–oh, how those pirates love their ham night. Me, too! Rick demonstrated for us how to find the line where the bone goes through the ham so you can find the meatiest part to carve from. Don’t forget to cut a piece off to stabilize it when cutting, just like with your veggies. It looked so darn easy! We then sampled two of Jones Dairy Farm’s hams, which were both delicious. Then again, when isn’t ham delicious? If you’d like a primer on how to carve ham, too, try this video from their website: 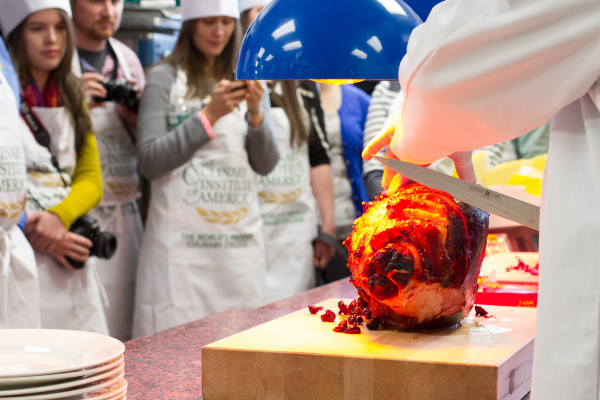 The real challenge came after this: the cooking challenge. We were divided into 4 groups and each was given a tray of ingredients–a secret until the unveiling. I was seriously nervous about this task. Being more of a baker than a cook, I had some anxiety about what would happen with the big reveal. Luckily, I was given some awesome teammates: Cristina of Cooking with Jeff and Cristina, Dan of The Food in My Beard, and Cate of Sweetnicks. Their fresh perspective on seasonings saved the day when we were given whole heads of broccoli and cauliflower, kale, lettuce, bulgar, oranges, and Greek yogurt. We also needed to select at least 2 Jones Dairy Farm products to feature in a main and side dishes. Cate, fortuitously, had just made a spicy whole roasted cauliflower the night before that could be easily replicated with the cauliflower, Greek yogurt, and juice from the oranges. We sprinkled bits of bacon over the finished product. Cristina and Dan were talking lettuce wraps and making a sort of salad filling with the bulgar, some loose sausage, roasted broccoli, and the kale. The direction they were taking was a new one for me, but an exciting one, too. 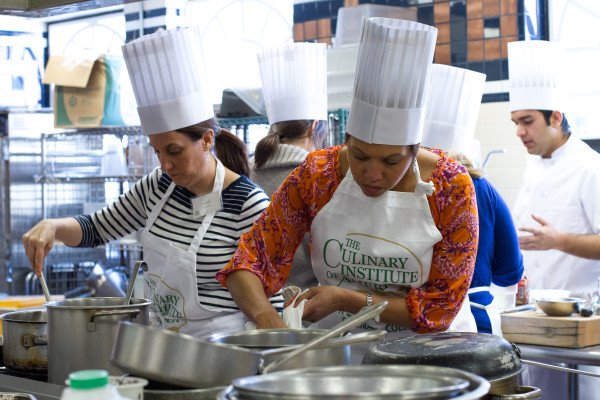 Instructor chefs and culinary students were available and assisting the entire time we were in the kitchen. And I must say, cooking in a professional kitchen is quite different than at home. Spider burners! How I love you! And what an endless assortment of ways to add flavor–nothing like my often inadequate pantry at home! Each of us got to work on our components. I felt a bit like a fish out of water–you know my history with cooking–but I can make bacon like nobody’s business. I slice the bacon before cooking if I want bits–this keeps you from getting bacon shards in your eyes–and sauté in a pan. In less than 20 minutes you have perfectly-cooked bits that are better than potato chips for munching. At least, the chefs in the kitchen seemed to agree on that. We had to hide our bacon from roving hands seeking a snack. 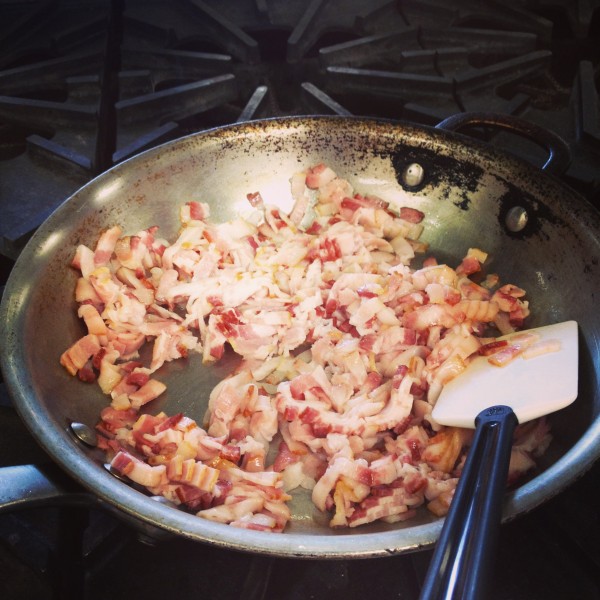 Lunch was to be what the teams prepared, plus we each had to plate 4 portions for the judges. It was a little surreal–were we part of a television show?–but fun, all the same. I’m so proud of my teammates! I would have been lost without them! 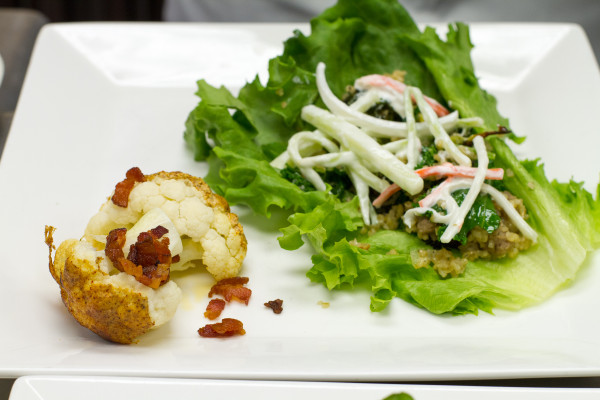 The day was capped off with a tour of the facilities. The grounds were blanketed in snow, so we remained in the main building, but there was plenty to see there. Typically there are 2500 students enrolled at any given time, with the average student age being 19. The 5 restaurants on site (one is being renovated currently) serve food prepared by the students–which had already impressed me the night before at The Bocuse Restaurant. I was very interested in the baking classrooms on the top floor but, since it was a Saturday, there was no action to spy on. The work stations, the mixers, the marble–oh, my! That would have been my calling, had I decided to go to culinary school. And the thought did cross my mind several times. 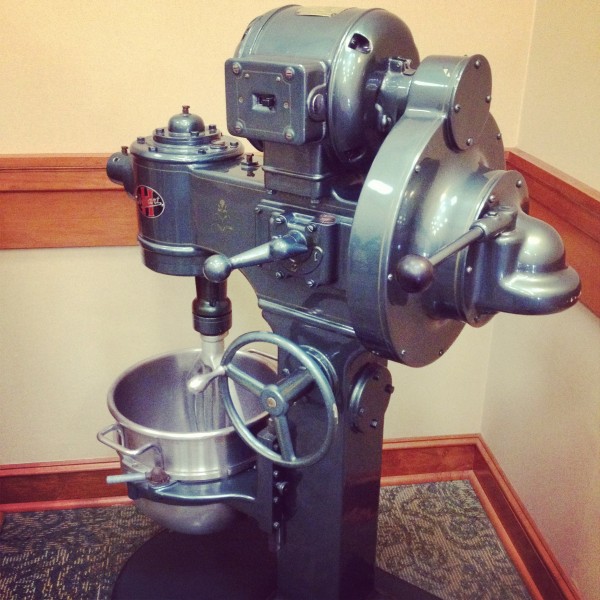 The drive home was full of fond memories. Being located only 1.5 hours away will make it easy for me to return–I must check out the other restaurants on campus and see the view of the Hudson River! In the meantime, I have Jones Dairy Farm to thank for all the food, fun, and learning of the weekend.