I don’t like bridges. I never have; I never will. I don’t think people should be suspended precariously high above water, just waiting to drop to their deaths. And I hate driving on them.

This past summer, I joined Nutmeg Nanny on a road trip to the Big Summer Potluck. She drove us over the Hudson River. It was the first time we had met in person and so I had to try my best not to hyperventilate, lest she think me a freak. Nearby, another bridge perched even higher, a walk- and bike-way where people could get more intimate with the dizzying height. I looked straight ahead, pretending we were on any other road. I did not want to encounter this bridge again.

Unfortunately, because I make a better co-pilot than pilot, I not only encountered it again Friday, I had to drive over it, too–twice.

You see, I was invited by Jones Dairy Farm to participate in a blogger event at the Culinary Institute of America this weekend. For many years now, I have wanted to visit this well-known campus and see for myself the wonders that lie inside. It was a dream come true to be chosen for this quest! Not only would I be participating in a day of fun at the campus, but they offered to put us up for the night at the famed historic Beekman Arms Inn in Rhinebeck, New York. What an opportunity! I couldn’t wait! 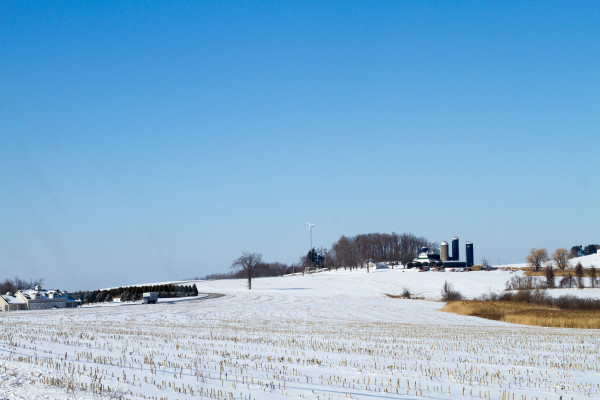 I get nervous about travel. I don’t do it often, and almost never alone. I plan my route far in advance and try to take into account any- and everything that may come up. I also prefer traveling in daylight hours, so I took half of a personal day off at my day job so I could ensure I was safely ensconced in my room before darkness fell.

It was a gorgeous day for a country drive. The snow from the storm 2 days prior had been mostly cleared and the sky was a perfect shade of cerulean blue. Barely a cloud dared smudge this canvas. Perfection. I tried my best to take in all the countryside had to offer, but for some reason, the speed limits in New York are really high. I can’t imagine any corners we’d be allowed to take at 50 mph in Connecticut, yet here, they’re encouraged. With two cars following closely behind, and no shoulder to pull off on, I had to keep my eyes mostly on the road. Mostly. 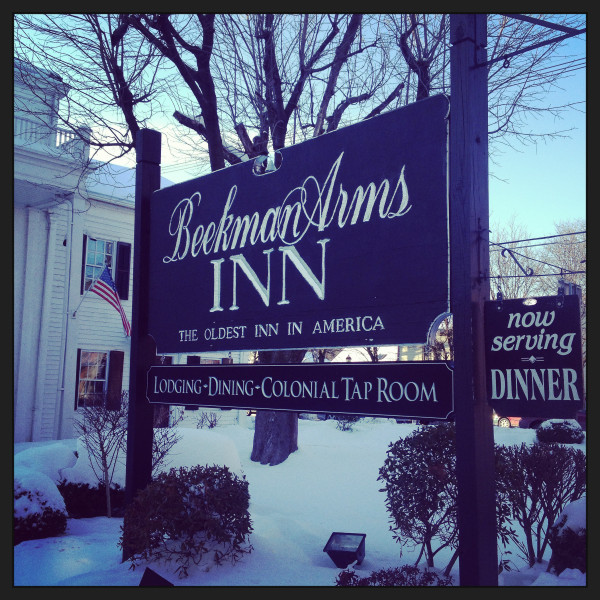 When I arrived in downtown Rhinebeck, I had 20 minutes to spare until check-in. I figured I’d take a little drive down Route 9, knowing at some point I would come across the Culinary Institute of America itself, and at the end of Route 9 was Poughkeepsie. It was too nice to sit in a parking lot and wait, so I pointed my car south and carried on.

This area of New York is full of history. Alright, just about anywhere is full of history, but you are bombarded with signs for historic sites: Vanderbilt mansion, Roosevelt homestead, Mills mansion, etc., etc., etc. In the warmer months, I may return to check these out. For the time being, I ventured on.

Eventually I did find the CIA and tried to quickly assess where I’d be going the next day. But then I got a little confused. Marist College? Oh, hey. I didn’t realize that was here. And the next thing I knew, I was merging onto the Franklin Delano Roosevelt Mid-Hudson Bridge. The bridge from last summer. And I was in the driver’s seat this time.

My eyes remained glued to the car in front of me. Mostly. Oh, look, ice chunks in the river! It must be really cold way down there… Eeek! My heart was pounding. I crossed the bridge in very little time, but it felt like an eternity. And once I finally exited the highway, I realized I would have to cross it again–and pay for the privilege! Darn tolls. We don’t have those in Connecticut…

So I paid my $1.50 and tried again. This time, in front of a cop. As if I wasn’t nervous enough! I found my way back to the East side and onto Route 9 again without incident. Phew! I survived the bridge and lived to tell the tale! Let’s not do that again… 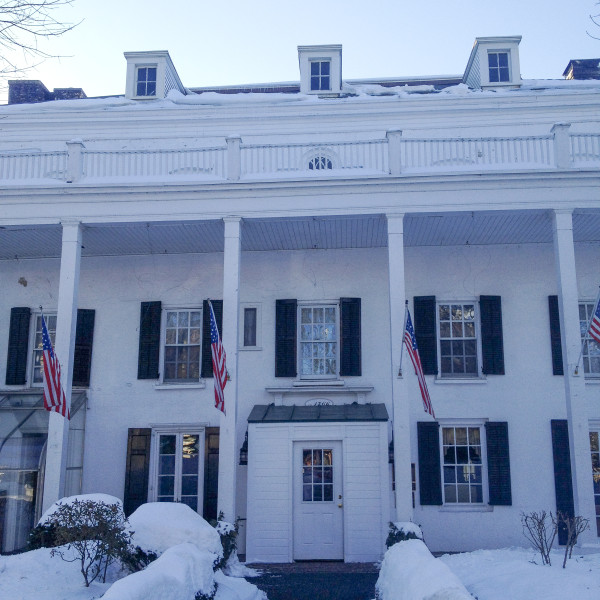 Back at the Beekman Arms Inn, after struggling to find a parking spot in the maze of spaces behind the building, I checked in. They claim to be the oldest continuously-run inn in America. And it’s rumored to be haunted. Have you watched The Innkeepers? I have. Many times. Because it’s based on our own purportedly-haunted inn in Torrington, the Yankee Pedlar Inn. It made for a very rough night sleeping. I’m not ashamed to admit I left the light on all night.

The inn is charming. Just what you’d expect an old establishment to offer. My room was on the 3rd floor at the end of the hall, set off in a corner by itself. It was adorably cute and cozy, and far more than I expected. A fantastic way to start the weekend. 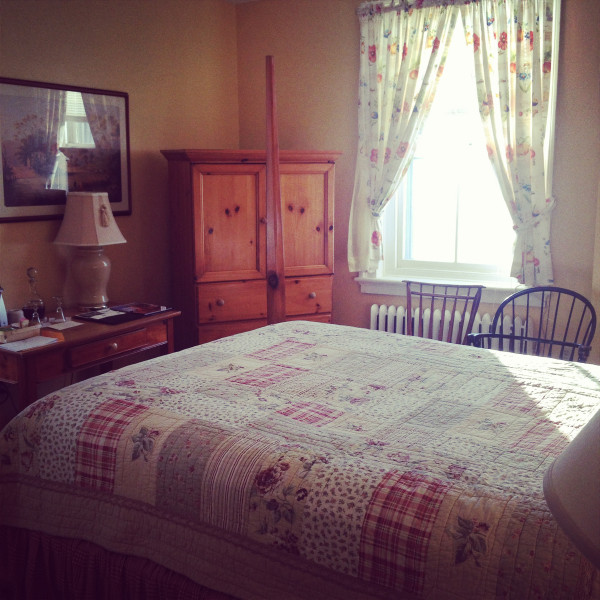 After having a breather in my room, I met up with some of the other bloggers who would be attending the event at the CIA–as well as representatives from Jones Dairy Farm and their marketing company–for a meet-and-greet cocktail-and-appetizers hour in the lobby. It was casual, allowing us all to get to know each other a little better while sampling treats made with products from Jones Dairy Farm. My favorite: the risotto balls with bacon. What isn’t improved by bacon?

From there, we caravanned to the CIA campus for dinner at The Bocuse Restaurant. What a treat! Bocuse is the French restaurant at the CIA–a white table cloth venue where dressing up is a must. As you walk in, you are greeted by an illuminated wall of wine. Swanky! 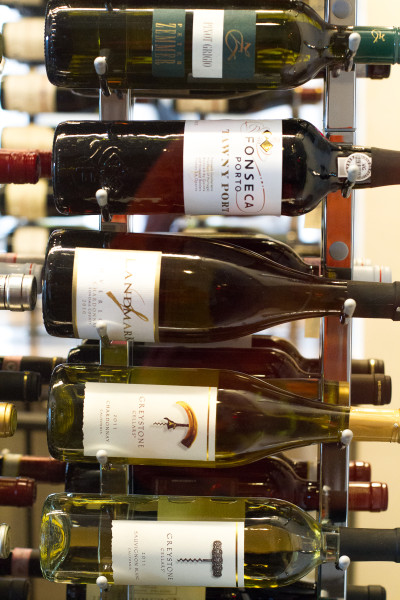 We started with a champagne toast and then Black Truffle Soup. There were the cutest little mushrooms ever enveloped in that pastry crust! For my entree, I chose Braised Beef Short Rib with celeriac-potato puree, hibiscus-infused parsnips, wild mushrooms, and beef jus. WOW! I am not much of a cook, but I want to know how to prepare this–it was phenomenal. The beef was so tender it could be cut with a fork and the mushrooms were so flavorful. I had to keep myself from licking the plate! 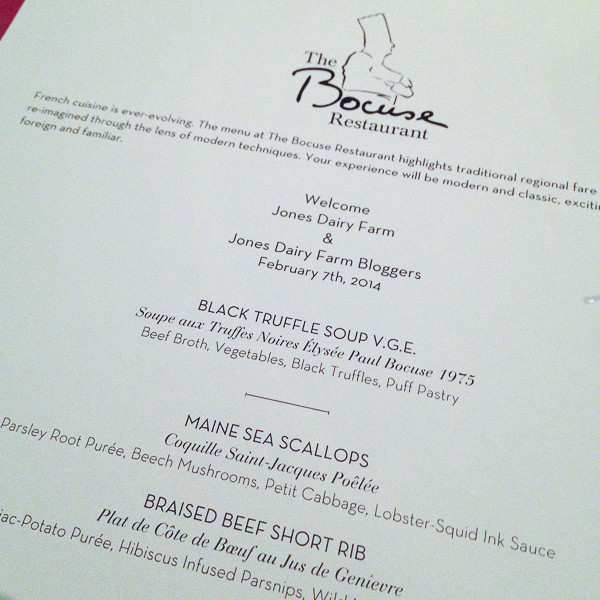 Dessert was, in a word, amazing. I’m not entirely sure what we ate, but they prepared blood orange ice cream tableside with a KitchenAid mixer equipped with a hand-crank and a little bit of liquid nitrogen magic. Each scoop was served with a pizzelle wedge. Following that came an assortment of chocolate delights including a sugar capsule that was ceremoniously cracked open to reveal a liquid interior that seeped out. I envy anyone who can master sugar arts–after my candy cane endeavor, I’m not sure I’m ready to try that again any time soon. And if the chocolate on the rest of the plate wasn’t enough, out came another plate with fruit gelees, nougat, espresso truffles topped with gold flakes, and olive oil cake bites. The perfect finishing touch to an already amazing meal.

Back in Rhinebeck, the group divided. A few of us went for a drink at The Liberty Public House before calling it a night. Others couldn’t resist the pull of their pillows, eager to get the night’s sleep over that lay between them and the big day at the CIA. There was much to look forward to… (which I will discuss in the next post…) 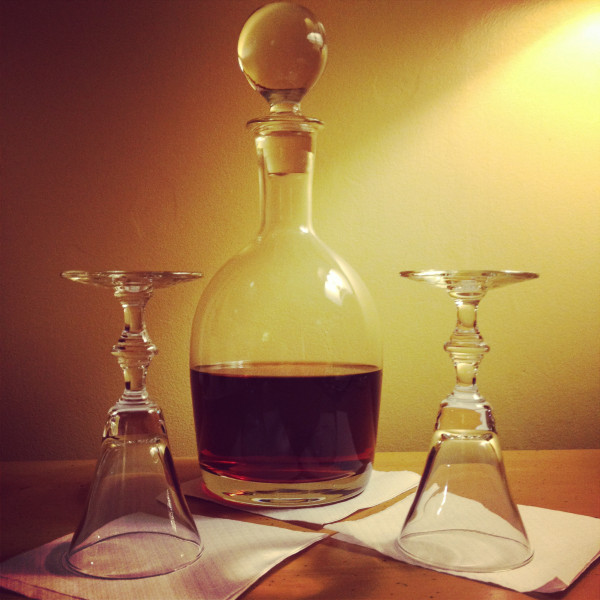