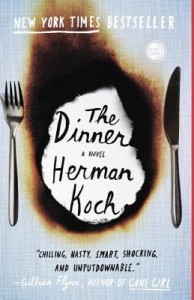 This post was inspired by The Dinner, a novel by Herman Koch. Two brothers and their wives sit down for a tension-filled dinner to discuss a tragedy that can change both families’ lives forever. Join From Left to Write on October 29 as we discuss The Dinner.  As a member, I received a copy of the book for review purposes.

As a parent, I often worry about whether I’m doing the right things to ensure my children’s bright futures. Am I balancing my demands with what they need? Do we have them in enough activities? And just how much privacy do kids deserve?

When I was in high school, there was much about my life my parents didn’t know. While I sporadically kept journals, I’m nearly 100% certain they were never read by my parents. If they had been, there would have been a lot more talks about what was going on in my life and about the depression I often suffered from. The internet came to be a household thing when I was in my last year of high school–or, at least a scaled down version of it, with BBSes (Bulletin Board Systems) that you dialed into and participated on message boards. It required a little more know-how than the average–certainly more challenging than AOL, which was also starting to come into fashion then–but opened up the doors to a world I had not known before. That could have been filled with much more malicious souls than I encountered. I thought I knew what I was doing–never meet someone on your own, make sure you get to know them online first, and don’t believe everything you read. I met my husband on a BBS. I also met a few boyfriends before him that way. But I also consider myself very lucky. Things could have turned out differently.

The family computer resided in my parents’ bedroom, but that was the extent of their supervision. Many nights, long after they had fallen asleep, there I sat in the monitor’s glow, typing away. To whom? I had a general idea. But I was also very naive. My parents probably should have been more concerned.

My kids are growing up in a different world. Technology has surrounded them since birth. My son figured out how to use the Wii system when he was 3 years old. Not long after, he mastered my Nook, too. Last year, we gave them Meep! tablets for Christmas, so they’d have a place of their own to play their games, learn something new, and have a limited access to the internet. Meep!s come with built-in parental controls where you can determine how much time can be spent on apps, games, and the internet, and whether they can access the full worldwide web or only small portions of it you deem to be acceptable. It’s a first step.

My daughter received a cell phone for her last birthday present. Not because we wanted to spoil her–I’m still not entirely sure I like that she has it. But we do not have a landline and she wanted to be able to keep in touch with her friends over the summer. She has a very basic phone with a very basic plan and she’s been encouraged to text whenever possible, as we all share the minutes. Mostly she’s mystified by the phone and can’t figure out how to use it. She’s called her grandparents a few times and texted a friend who lives an hour away, but not often. And I check her phone often to see what she’s been up to. Because that’s my job. To protect her. To know what she’s doing. To be there to guide her through the minefields of life.

As they get older, there will only be more concerns. A former co-worker used to say Small children, small problems; Big children, big problems. With age comes wisdom, but not for some time. And while they are entitled to an amount of privacy, as all human beings are, I do not intend to hand the world over to them for quite some time. I expect to have them check in with me often. I will monitor their online activities. And their phones will be open books. I do not want to foster an environment where predators can easily access my most precious jewels. They probably won’t like it, but it’s for their own good.

Do you monitor your children’s activities? Or do you think that’s a violation of their privacy?