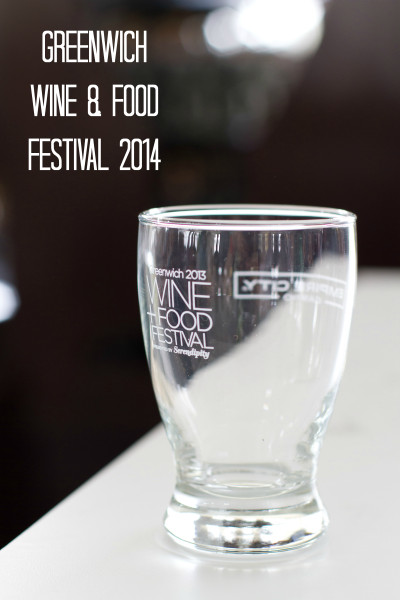 On Saturday I continued my birthday week celebration with a visit to the Greenwich Wine + Food Festival presented by Serendipity. I have decided there is no better way to mark another year of life on Earth than by partaking in some of the best parts about it: food, wine, beer, and booze. This may become an annual tradition. 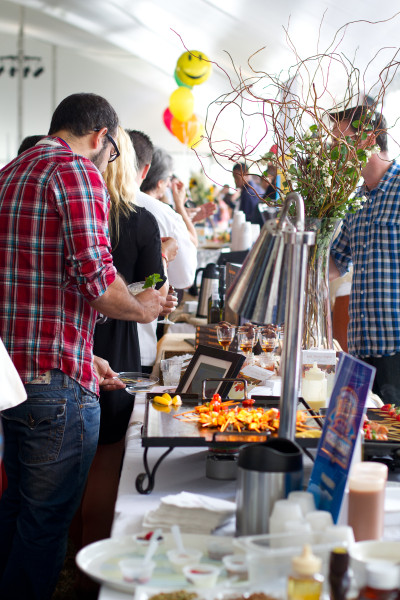 I was lucky enough to win my ticket from CTBites.com, but it is completely worth the price of admission. Besides the 100 or so vendors you’ll have access to, the demonstrations by highly acclaimed chefs from near and far, and the Burger Battle, the whole shebang benefits The Hole in the Wall Gang Camp, a camp for seriously ill children and their families. Founded in 1988 by actor Paul Newman,The Hole in the Wall Gang Camp gives children with serious illnesses the chance to enjoy the camp experience–free of charge–and benefit from the healing environment there. What a fantastic cause!

As a guest of CTBites.com, I was welcome in the Blogger Lounge, where interviews were happening all day long. There was so much to see and do that I didn’t spend much time in the lounge–I wanted to take in as much as possible–but I did stumble upon their interviews with famed Chefs Duff Goldman (of Charm City Cakes and the television show Ace of Cakes) and Graham Elliot (of restaurants Graham Elliot and Graham Elliot Bistro, as well as the television shows MasterChef and MasterChef Junior), two of my favorite television chefs. (I actually skipped the photo ops with Duff so I could hear all Graham had to say!) 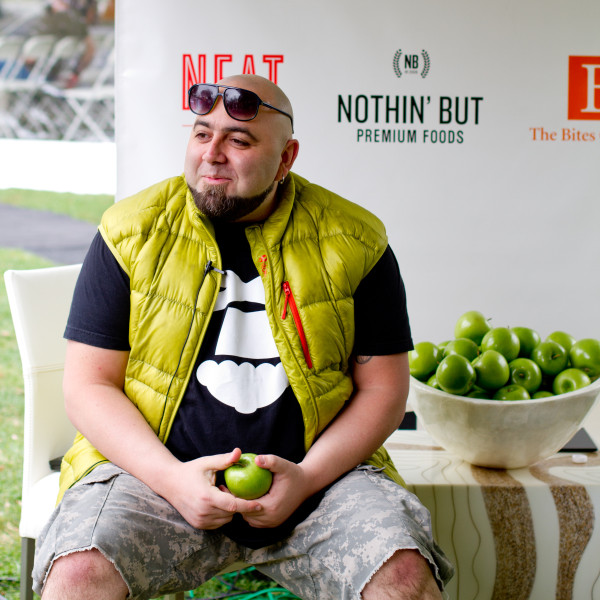 I had no idea Duff Goldman was such a hellraiser in his youth! Alright, maybe I had an inkling. But it was really cool hearing him tell his tales, chatting like we were all long-time friends. There was such an ease in his delivery. Then he whipped out his cell phone to show us a photo of a life-sized elephant cake he made and I had to wonder: Were we really sitting in the presence of the Ace of Cakes? It was unbelievable! 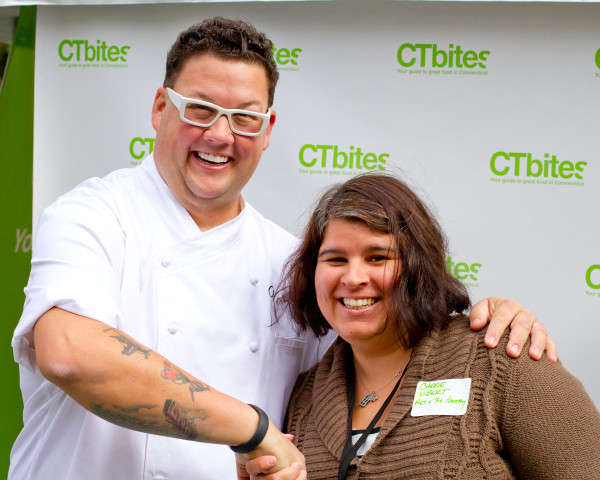 Chef Graham Elliot was such a pleasure to meet! Truly an authentic person, he dispensed excellent advice, like Don’t push the envelope. Tear it.and If it ain’t broke, break it. Graham certainly knows how to live his words! He and his partner, Merlin Verrier, will be opening a restaurant in Greenwich–his first restaurant outside of Chicago!–in December called Primary Food & Drink. It will be his creative spin on traditional favorites–or as he called it, American Cuisine 2.0. I cannot wait to see what they’ll be serving up! (Mental note: return to Greenwich in December…) 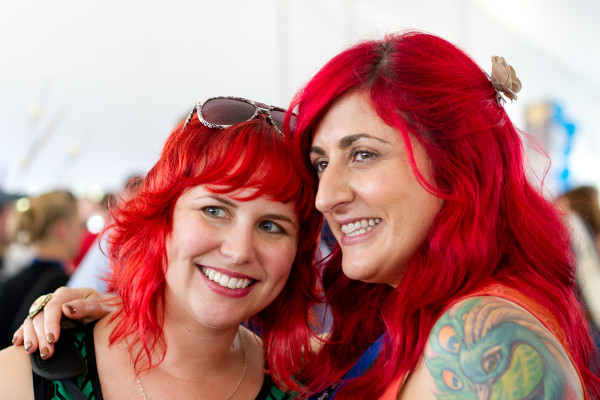 Holly Danger and Kristien of OmNomCT – LOVE their hair!

After my crazy fan-girl babbling experience with Chef Graham Elliot (and our Presidential handshake photo op, as he called it), I met up with Connecticut bloggers Jenny of Sweet Jenny’s CT, Latanya of Sprinkles and Booze, and Holly Danger to feast away. And feast we did! Wow–so much food, wine, beer, and booze! This has to be the best birthday bash I’ve ever had for myself. (Alright, they didn’t know it was my birthday weekend, but I’ll take what I can get!) 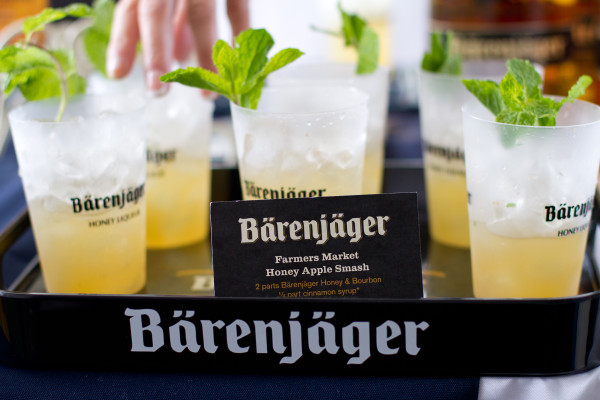 Events like the Greenwich Wine + Food Festival are a fantastic opportunity to explore new tastes. Greenwich is a whole new world to me–this was my first time driving that far down I-95!–and I was floored by all the outstanding options. Take, for example, these duck and foie gras meatballs with fig jam: 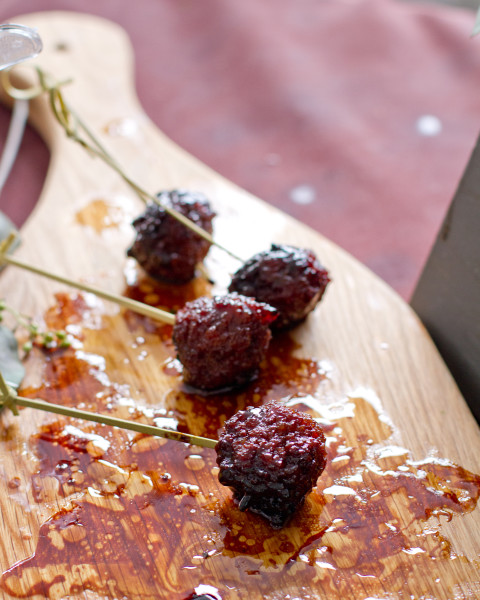 I definitely paused for a moment, unsure whether I should. Jenny popped one in her mouth and declared it divine, so I had to try. Crunchy caramelized exterior, soft and hot interior. They were better than I expected! I just couldn’t think about what was in them and I was more than fine. 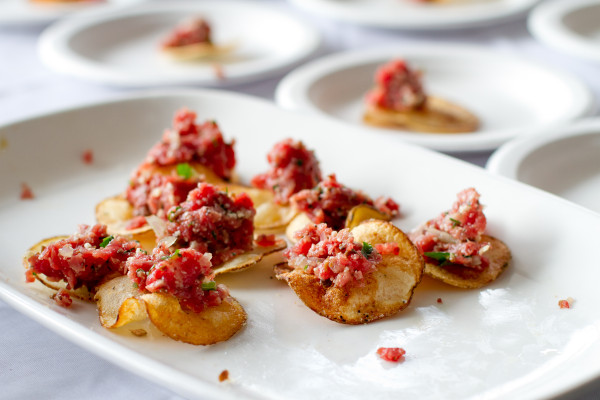 Steak Tartare also had me wondering whether I should or should not. I LOVE rare meat. I’ve even consumed undercooked rare (alright, probably raw) cheeseburgers. So why did Steak Tartare freak me out a bit? I tried it. I liked it. I’m glad I went for it! 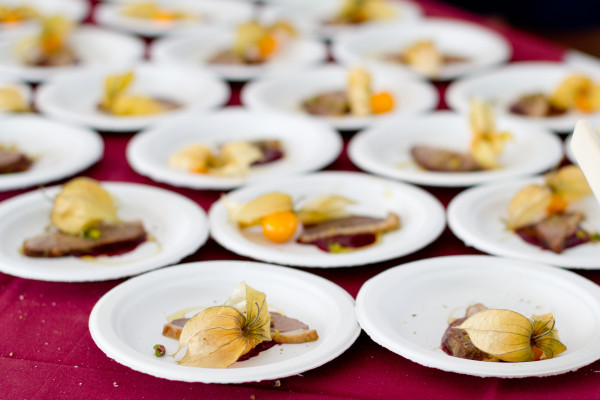 This duck breast in cherry sauce with gooseberry from Morello Italian Bistro was too pretty to resist. So rich and tender–I could have eaten more than 1 plate! But I wanted to leave enough to go around. So we moved on. (Note: this is on their dinner menu, so there could be a future trip there…) 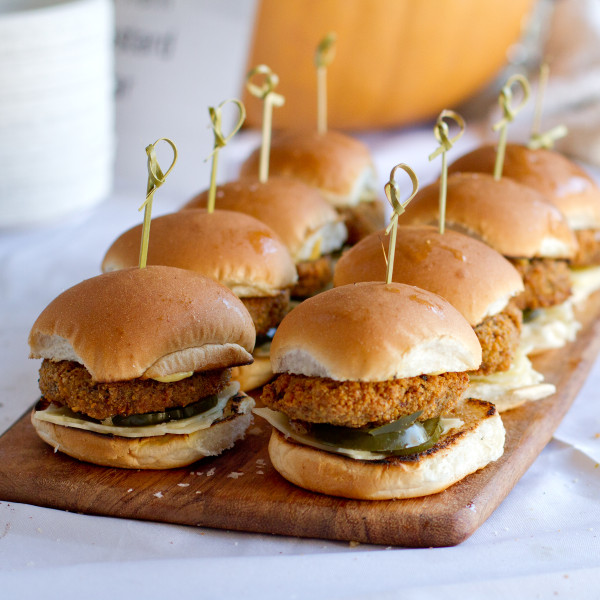 Most adventuresome eats for the day goes to Oak + Almond. These cute little sliders look amazing, but they have a little secret. They’re offal. Purely offal. As in, head cheese. Crispy head cheese. My companions insisted I take a bite, but this offering really made me wonder about my sanity. I have a vague idea of what’s in head cheese–the guys at the booth thought telling me the exact composition might help me decide, but I begged them not to. In the end, I gave in. And was pretty darn impressed. Of course, just about anything fried is fabulous. But this was rich, meaty, salty, and crunchy. Surprisingly good. Though I could not think about what I was putting in my mouth–my stomach really is too weak to handle that. Kudos to you at Oak + Almond and Jeff Taibe! I swore I’d never eat head cheese. You’ve proven me wrong! 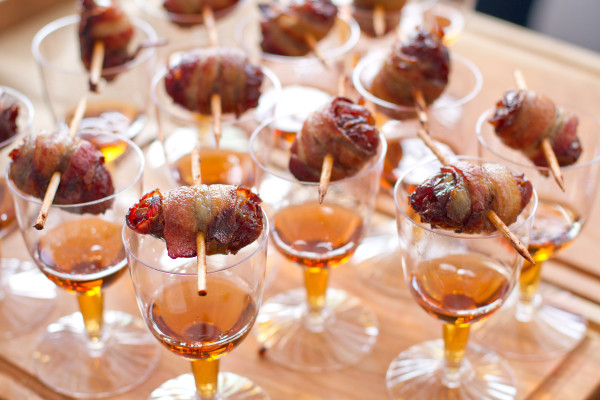 Barcelona Wine Bar captured my heart with their sample: Bacon Wrapped Dates Stuffed with Blue Cheese atop a tiny glass of sherry. WOW! Salty, sweet, warm, and insanely delicious! I could have parked myself in front of their booth and stuffed myself with these all day long. What an amazingly simple idea that really packs a punch. Barcelona Wine Bar–I must come visit you soon! 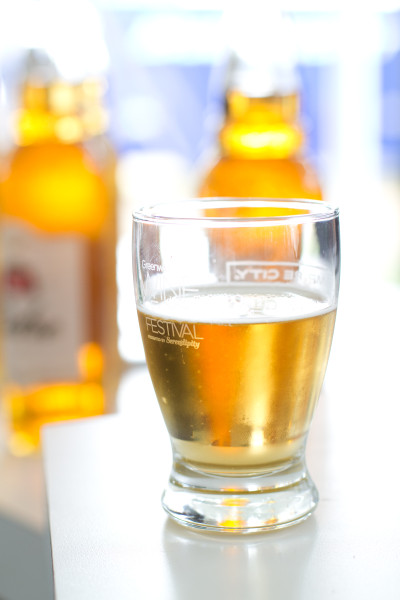 Surprise of the day in the alcohol category comes from Stella Artois. I’ve had Stella before and it’s okay–nothing to write home about, for sure. I tend to prefer darker beers with more depth of flavor. But they were pouring their new Cidre at the Fest and I’m always on the lookout for gluten free drinks for my friends. Hard cider hasn’t won me over yet, but Stella’s version was pretty nice. Some taste too much like wine for my liking (if I want wine, I’ll drink wine!), but this was better balanced and refreshing. Fruity but not overpoweringly so. A nice complement to cheese, I bet. I could see myself not only getting some for friends, but perhaps–just maybe–even drinking it myself. Nice job, Stella Artois! 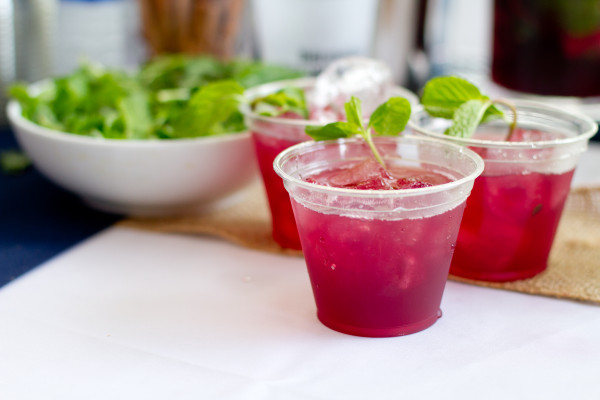 Not so surprising was this Farmers Market Ginger Grape Smash from mixologist Todd Richman for American Harvest. Just looking at it, I knew I would love it–and I did. So fresh and tasty–and they were handing out cards with the recipe so we could replicate it at home. This will be in the rotation again. Lovely cocktail! 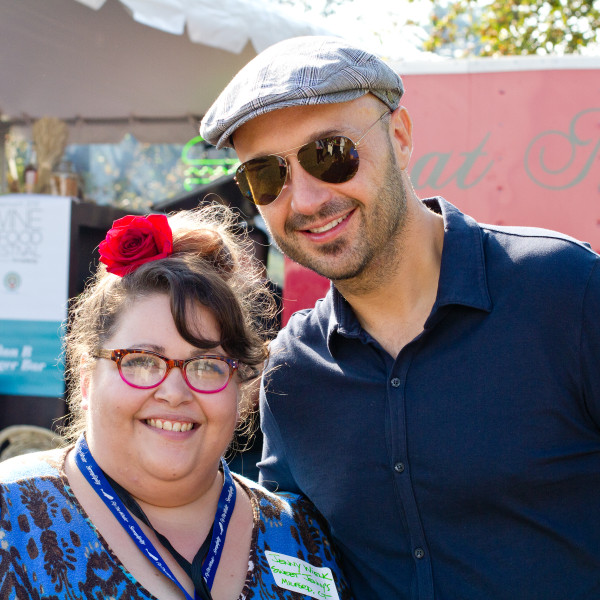 We missed the devastatingly handsome Englishman pouring gin and instead headed over to watch Graham Elliot’s cooking demonstration. On the way, we spotted another MasterChef host: Joe Bastianich! He terrifies me, so I couldn’t build up the courage to talk to him, but Jenny asked if he’d pose for a photo with her and he happily obliged. (Maybe he’s not as scary, after all!) 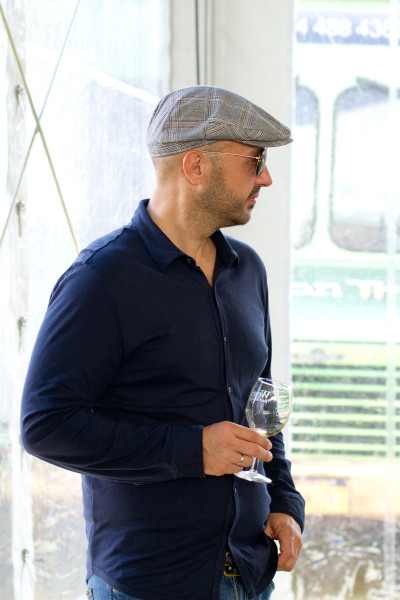 Before Graham Elliot could take the stage, Duff Goldman had to finish his demonstration. Which ran a little late. And turned into a game of spot Joe Bastianich between Duff’s remarks on twerking and tales of his youth spent working his way through the food court. Eventually, Graham Elliot and Merlin Verrier took the stage and prepared a pumpkin soup served in a small pumpkin shell. Perfect Fall flavor. 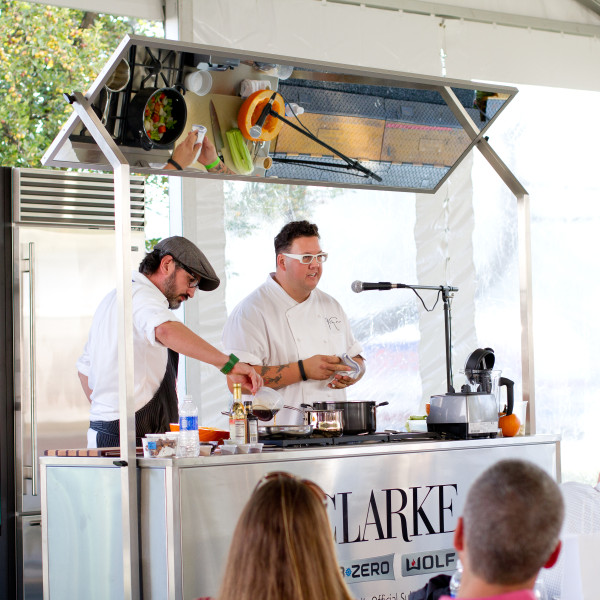 They were quite the comedic duo. Here’s a short clip from their demonstration (excuse the shakiness; I need to work on that!):

It was starting to get late, so we took a final sweep of the Culinary Village Tent to see what we missed. Sadly, most booths were already packed up at this point, but we did manage to get a bit of house bacon from The Redding Roadhouse and sip some Creme Brulee Iceberg Vodka (yum!)–thanks, Steve Shaw for pouring us just one last taste and taking some time to chat with us even though you probably wanted to go home! 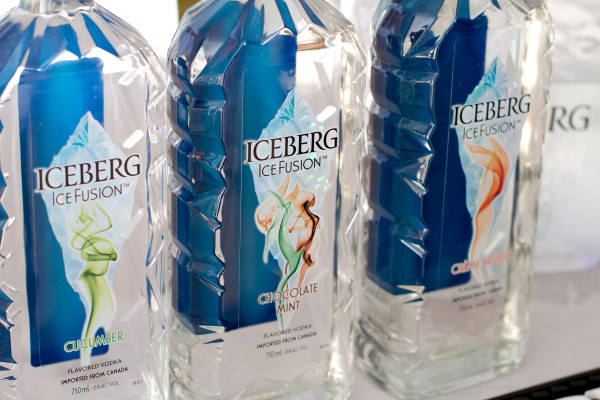 And then we had to pose for a bit for the only paparazzi interested–ourselves! 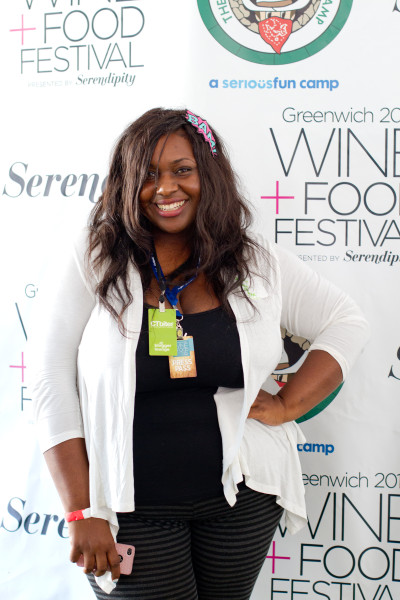 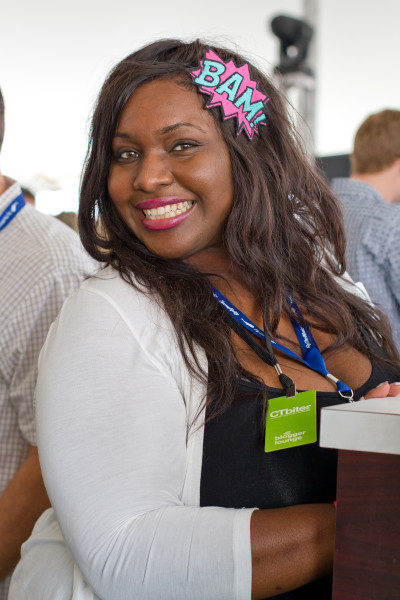 Last gig of the day: the Burger Battle. The celebrity chefs lined up to judge what was placed before them. Some received ridicule reminiscent of MasterChef, like the “pizza burger”–the one they suggested throwing pizza on top of, since it was already a convoluted combination of flavors (a little too much going on). Others received accolades, like my *favorite* burger bar, Plan B, whose simple cheeseburger on a bun won the event! Yay, Plan B Stamford!!! The banter was entertaining, and I was in awe of the culinary greatness before us. What a fantastic way to close out the day! 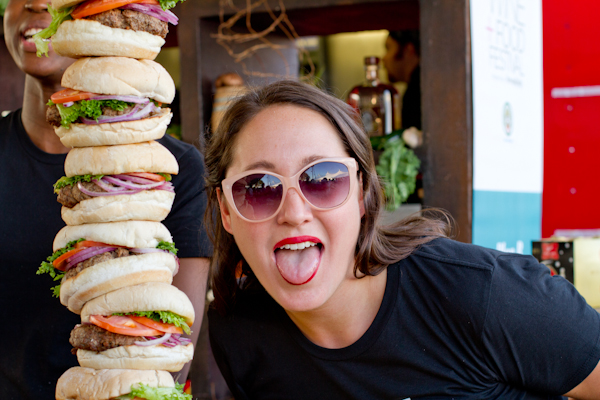 Congrats, Plan B Stamford, on your Burger Bash win!

Satisfied with the day, I was off to celebrate my birthday some more at my friends’ band’s gig (now that’s a mouthful!). All good things must come to an end, and so I bade a fond farewell to the Greenwich Wine + Food Festival. I will be back next year! I promise!

Did you attend the Greenwich Wine + Food Festival? What did you enjoy the most?

Disclosure: I won a ticket to the Greenwich Wine + Food Festival from CTBites.com. I received no compensation for this post.