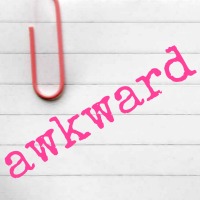 Have you watched that show Awkward? I probably shouldn’t admit that I have–or that I consumed the entire first season over 12 hours when I first discovered it–but I have, and I did.  You see, the A. that’s my middle initial–it may as well stand for awkward. Not in the TV series sort of cute-awkward-girl-still-gets-the-guy(s)-way. I’m no Zooey Deschanel. More in the doesn’t-fit-in-even-18-years-after-high-school manner. Yup, my dirty little secret is out–I’ve never really been in. I probably never will be either.

What were supposed to be the “best years” of my life weren’t exactly a day at a Cancun resort. I imagine that’s true for many people. You couldn’t pay me to go back. And since then? Well, that’s been pretty full of awkwardness, too. Not really knowing what to do with myself in social settings. Overcompensating with mixed drinks and a loud mouth. Still feeling like the piece to a different puzzle altogether.

Tonight’s catch-up episode from Season 2? Reminded me of an experience I had 3 years ago. Right before this blog started, when my creativity burst free again, and I decided to do something with it instead of ignoring it like I had for far too many years. A high school acquaintance crossed my path and, at the time, was trying to get people to attend a weekly poetry night he hosted at a local juice bar. It reminded me so much of the mid nineties coffee house scene that I couldn’t miss it. And after my first visit, I was hooked. This is what had been missing in my life. This is what I had been overlooking. This needed to be a part of my life again.

The idea of standing in front of a crowd, baring my heart and soul, terrified me though. My friend understood that was exactly the kick in the derriere that I needed. One night he called me up on the makeshift stage and I had no choice but to do his bidding. And while my arm wouldn’t be still and my voice wavered with fright, I survived. And then I craved more. It was scary. Oh, being in front of a crowd, even if it only consisted of about a half dozen souls, was an anxiety attack waiting to happen. The adrenaline boost, however, exceeded any alcohol-induced buzz I experienced, and what came after can only be described as an awakening. The prince had placed his kiss. My slumber had been broken.

The more difficult part came 9ish months later. The birth of an idea that was fertilized that summer; a poem that won a creative writing award during my last semester of school. I was 32 and I was about to recite a poem about things most of my classmates had no frame of reference for. Shaking like a leaf is an understatement. I managed to speak every word, to attempt eye contact at intervals across the room, and all because nobody I really knew was in the room (other than my favorite professor and his pet student, who was helping run the event). These people didn’t know what all those birds stood for. They didn’t understand the feelings behind the poem; the internal struggle that waged, finding its way out in these words. It was subtle enough for the uninitiated to remain clueless. It was soul-baring enough to make me feel naked in front of the faculty–those who had lived enough to probably know exactly of which I spoke and probably have their own tales to tell. It was one of the bravest moments in my life.

Now? I’ve traded my rare moments in the spotlight for a few random, intermittent, semi-drunken karaoke sessions. Other than that, I keep to the back of the crowd. Where I belong. Do I need to be a part of it? Well… sometimes it would be nice. It would certainly make some aspects of life easier. But do I need it? No. I have two awesome kids. I have a husband with whom I’ve shared 18 years of my life. I have some great friends who are my support system. That’s all a girl really needs, right? So I didn’t outgrow my awkward phase. There are worse things in life than that. (Like my television viewing, apparently…) At least I’m choosing to be me. Whoever she is. That’s what matters… right? I’m too old to be Jenna. And too old to be bothered by that either.