Have you ever wondered about the origins of the recipes you find flipping through magazines or browsing your favorite websites? How do they think of them? Where do they prepare them? How does this all come together? On Wednesday, a baker’s dozen of bloggers and I were given the chance to find out!

Anna Curran and Emily Ziemski of Cookbook Create, where you can make custom cookbooks, along with Leiti Hsu, organized the kitchen tour of a lifetime. Clay Williams, photographer, was there to document it as we were welcomed within the walls of Bon Appétit magazine, The Daily Meal, and Food52, where we were given the inside scoop–and a little taste of what goes on behind the scenes. What an experience! 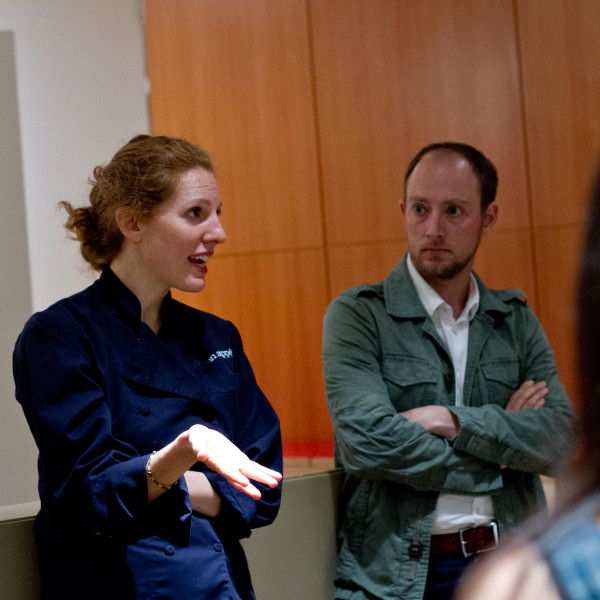 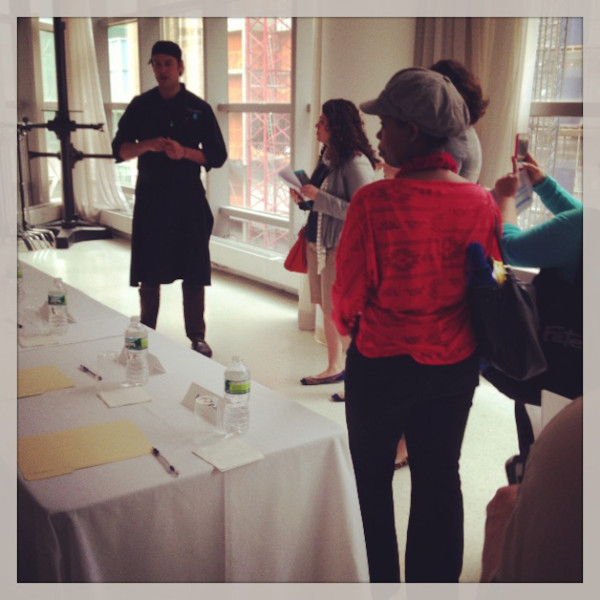 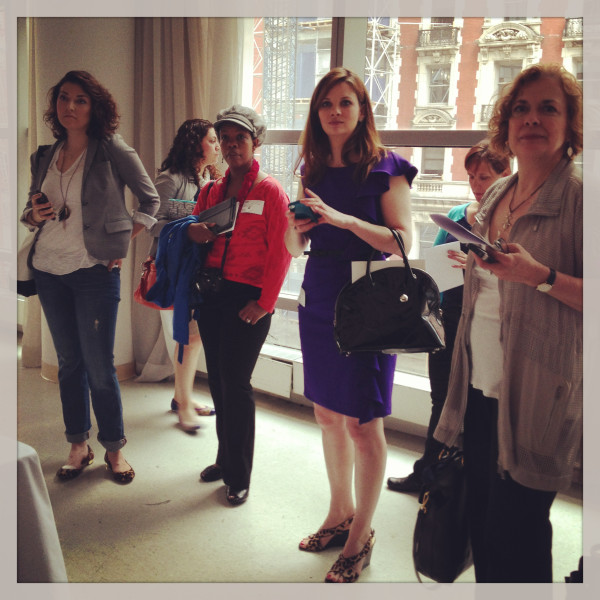 Magazines, unlike blogs, need to plan pretty far ahead. At Bon Appétit, that means working on issues 3-4 months in advance, with testing done most days on site. How do they keep so fit with all that food around? Tasting, not eating. I can see how that would be important! 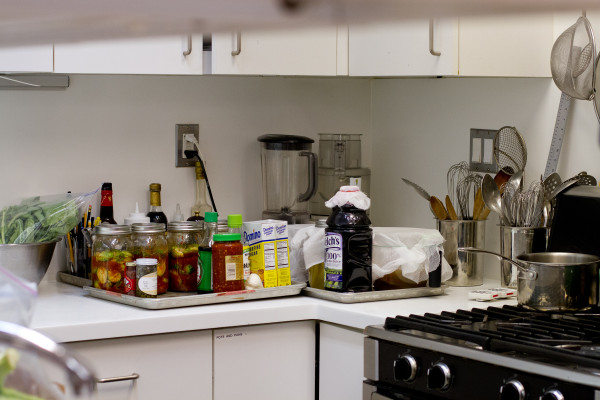 Which comes first: the chicken or the egg? They usually begin with the story idea, working together to develop recipes that fit after that. Recipe developers do not test their own recipes–that is left to a recipe tester, as testing is its own skill set. Recipes will be tested anywhere from 3 to a dozen times (though most fall somewhere in the middle). It could be a hit on the first try–it could take 11 attempts and be a lost cause. Their thoroughness means more successes for their readers. 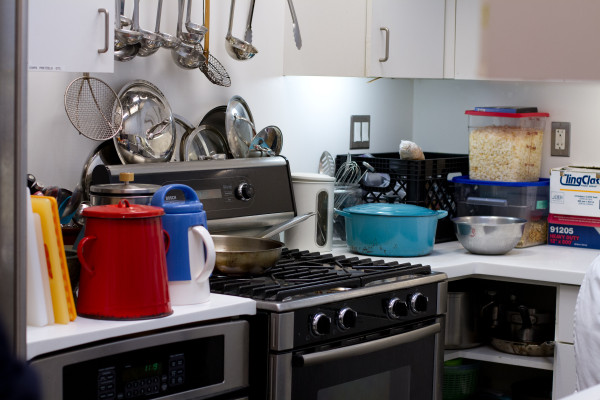 The test kitchens consist of 8 bays that are laid out like the average home kitchen. They may have a little more counter space than I do, but they’re equipped similarly with the typical tools a home cook would have: electric oven, gas stove, microwave, mixer, blender, etc. Despite their gourmet reputation, Bon Appétit wants their recipes to be replicable by their readers–of course, that makes sense! Great effort is put into selecting ingredients most people can find and avoiding fancy chef-centric appliances. 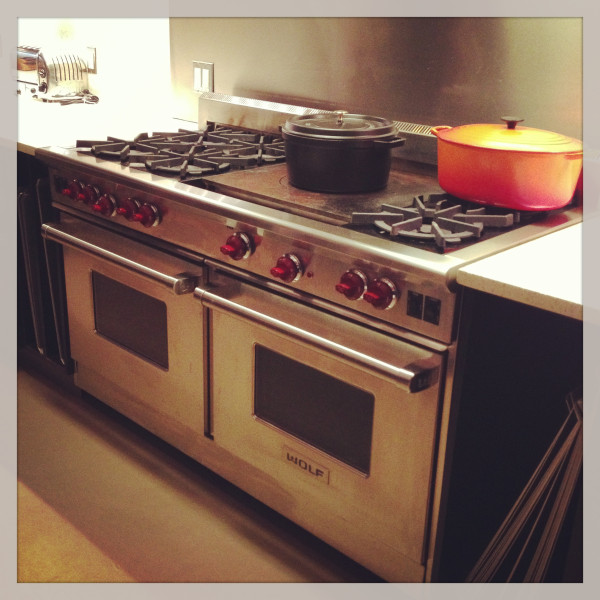 The events kitchen, however, had all the glamor I expected. If I could obtain a Wolf range like theirs in my lifetime, I would die a happy lady. Two islands and a spacious dining area were perfect for mingling. It was also where we were treated to an appearance by Adam Rapoport, Editor in Chief of the magazine. A very down-to-earth guy, he had the demeanor of a man who had far less on his plate than a whole magazine empire to run. He does it with style. 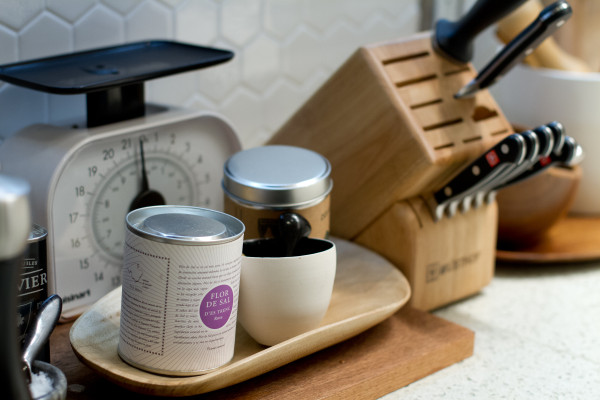 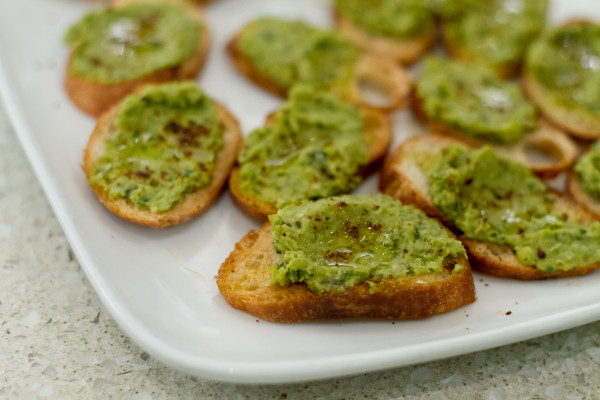 We could have stayed at Bon Appétit all day and noshed on their pea crostini, deviled eggs, and sipped their homemade ginger soda, but it was time to move on. Traveling like a 5th Grade field trip, we took the subway heading south and re-convened at The Daily Meal. 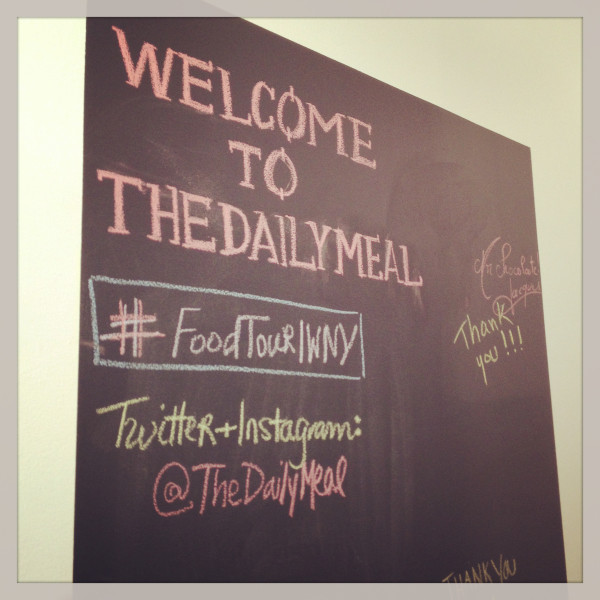 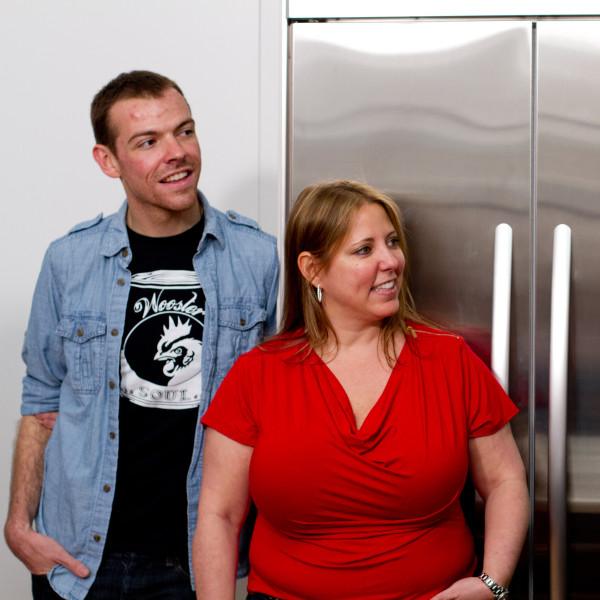 The Daily Meal’s test kitchen is a newborn, only just starting to be broken in, but they have big plans for this space. Outfitted with the best of the best from sponsors like KitchenAid, Silestone, and Plain and Fancy Cabinetry, it is a sight to behold. (Oh, how I want their corner cabinet pull-out so I don’t have to crawl in up to my hips to grab party supplies out of the back of mine!) Anne Dolce, Cook Editor, prepared Sauteed Fava Beans and Greens on the induction cooktop while the editors spoke with us and explained how it all works at The Daily Meal. 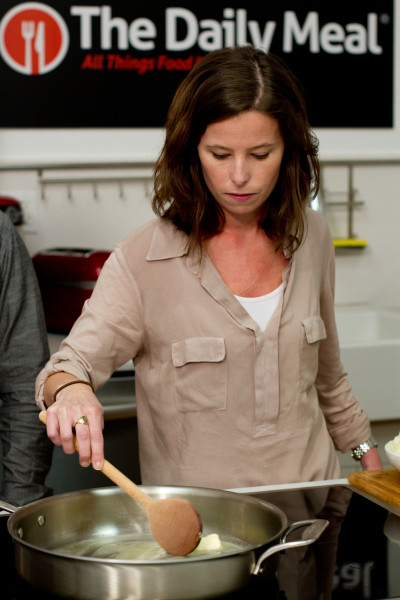 With 250-300 articles a week, it’s impossible to test all recipes on site. In fact, they rely mostly on contributors to test the recipes for them. But the new kitchen, fitted out in a previously vacant portion of the office, will allow them to do more in their own space. It also doubles as a studio for video and photography with the excellent overhead lighting installed. 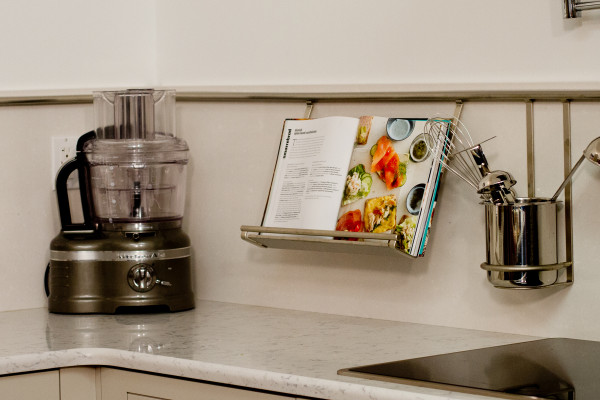 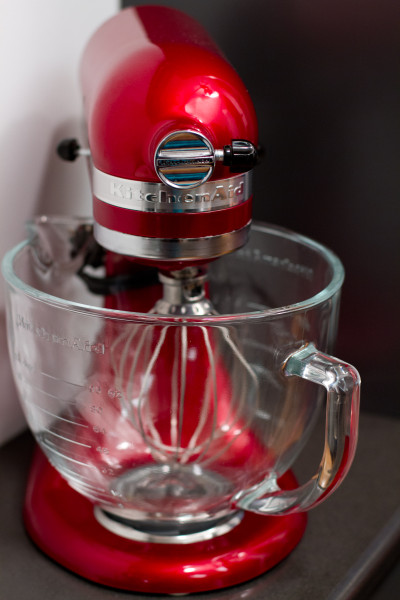 With this much content, you can imagine that they’re planning ahead. Far ahead. Their editorial calendar is plotted out a year in advance, in fact, with all 5 channels collaborating on the bigger topics and events. (Those would be Eat/Dine, Cook, Drink, Travel, and Entertain, by the way.) I can’t even imagine that level of work–even with contributors, Colman Andrews, Editorial Director, stressed that the editors are busy doing their own astounding amount of writing, as well. 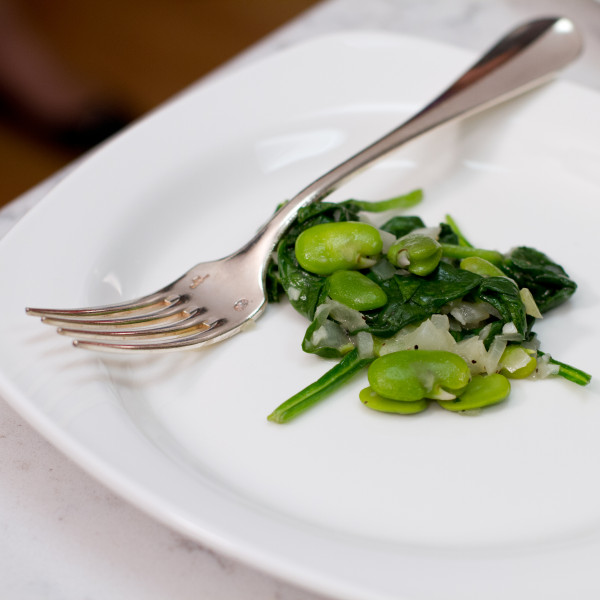 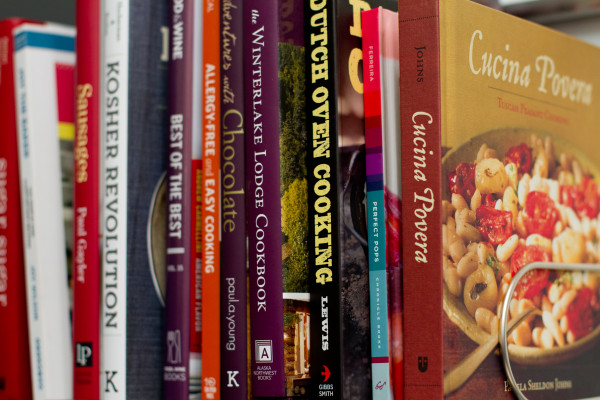 Ali Rosen, Video Editor, took advantage of a room full of food bloggers to ask us what our best tips were for those who are new to blogging. You can find our answers here: http://www.thedailymeal.com/tips-blogging. 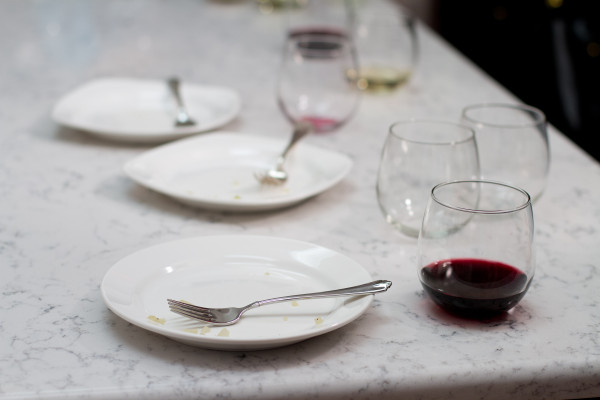 While the wine was quite lovely, it was time to continue our journey once again. We walked from The Daily Meal, past Madison Square Park (and Mad. Sq. Eats!), to our last stop on the tour, Food52. 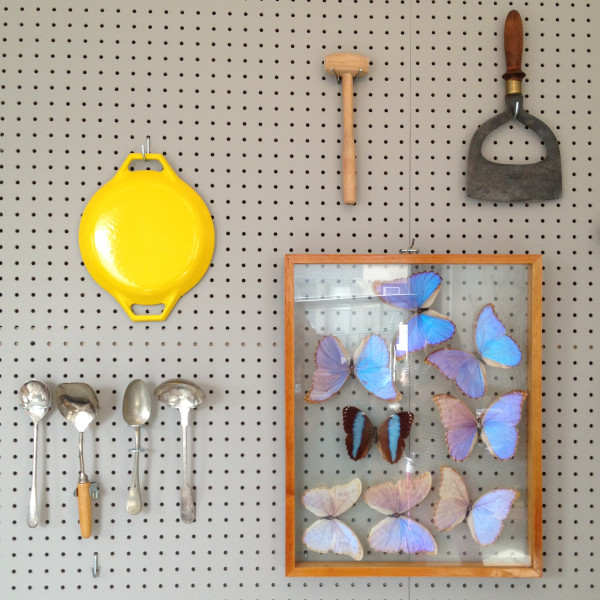 Walking into Food52 was like entering my fantasy workspace. Large windows illuminated bright, white walls spotted with vintage kitchen tools and reclaimed wood shelves. There were large tables around which the staff worked, with the kitchen in the back. The kitchen didn’t scream look at me!!–rather, it was easy to envision it as part of a house in the country, somehow transported to the 13th floor of a building that overlooks Madison Square Garden. The disconnect was quite welcome. 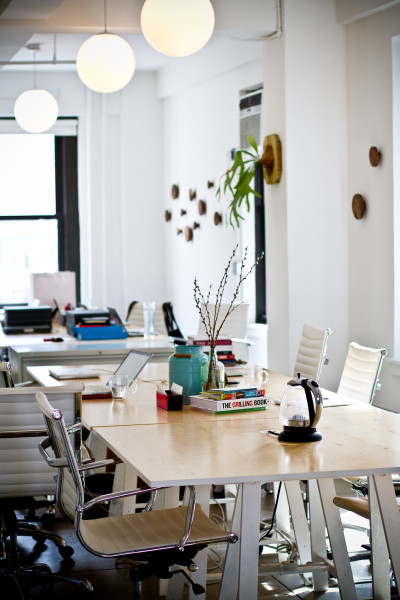 The kitchen island was crowned with a dark walnut butcher block, and the walls behind were lined with props that aren’t merely props, as all pieces are used functionally, as well. A stainless fridge was tucked away further down the wall, past the hanging linens in shades of white and cream and beige. As Merrill Stubbs, Co-Founder and Editor-in-Chief, described it, it was “clean and modern with a warmth.” You just wanted to grab a cup of coffee, lean against the counter, and take in the sun, now peeking through the dissipating clouds, breathing in the moment. 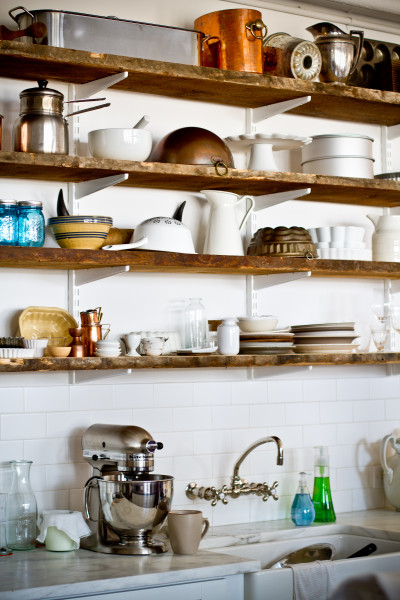 Food52 started as a place for Merrill and Amanda to hang out online and became a way to help others who are passionate about food to come together and expand their reach. Food52 crowdsources their content. In fact, their first cookbook came from weekly contest entries over the course of one year–or 52 weeks. They continue to gather content in this manner, utilizing contests to inspire contributors. It’s a beautiful thing. 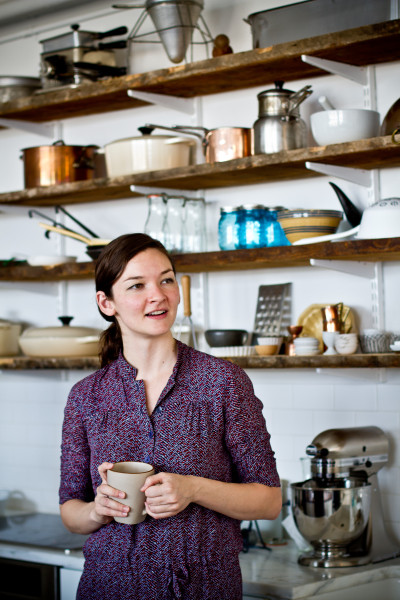 Commerce is the next step for Food52. While they have curated deals available on the site currently, Provisions will be launching soon, featuring products they love paired with ideas on how to use them. Merrill was quite excited about this new venture–I can’t wait to see how it works out! 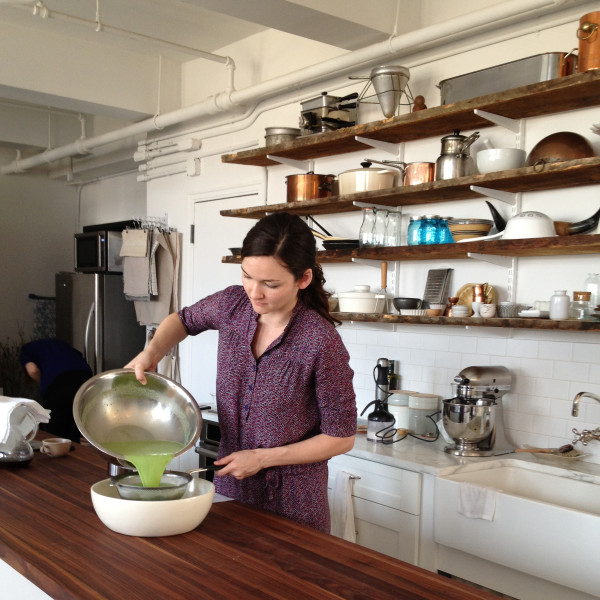 Kristen Miglore, Senior Editor, prepared a chilled pea soup with garlic cream and pickled ramps for us to try. Vibrantly green, it was the epitome of spring. So many flavors mingled together–this bore no resemblance to the mushy, yucky stuff that comes from a can! 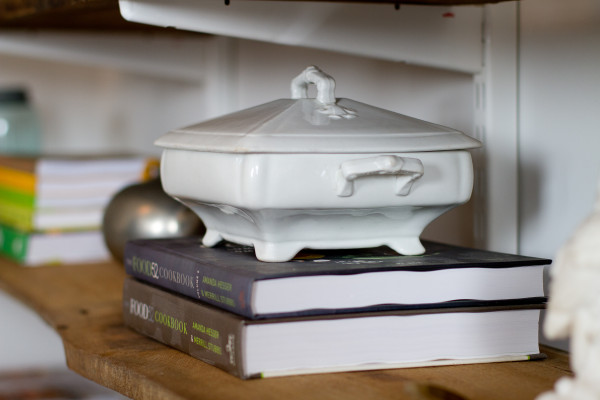 It was now time to go, the tours having been completed, the day soon turning into night. Fast friends said their good-byes, hoping to see each other again soon. The #FoodTourIWNY brought more than a sneak peek to these women’s lives–it brought a new set of friendships to be made. Food is pretty awesome like that–it brings people together. 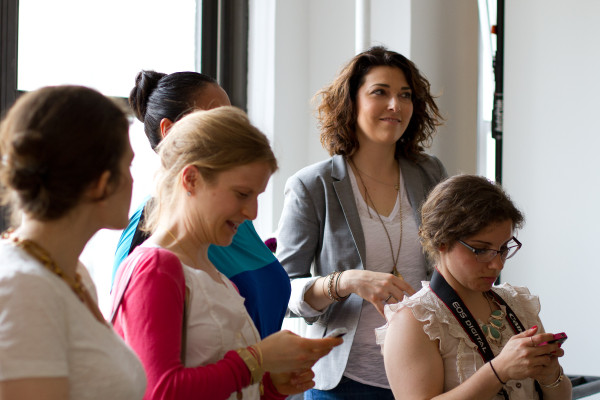 Want to know more about the participants in #FoodTourIWNY? Check out their blogs below!