There are certain advantages to being in Northwest Connecticut. Like being able to enjoy a balance of rural and suburban life in my commute to work alone. Cows and convenience stores–we have ’em! Another is having (small) mountains and ocean within an hour’s drive (if not less). But one of my favorite pluses is being just a little over 2 hours from New York City. 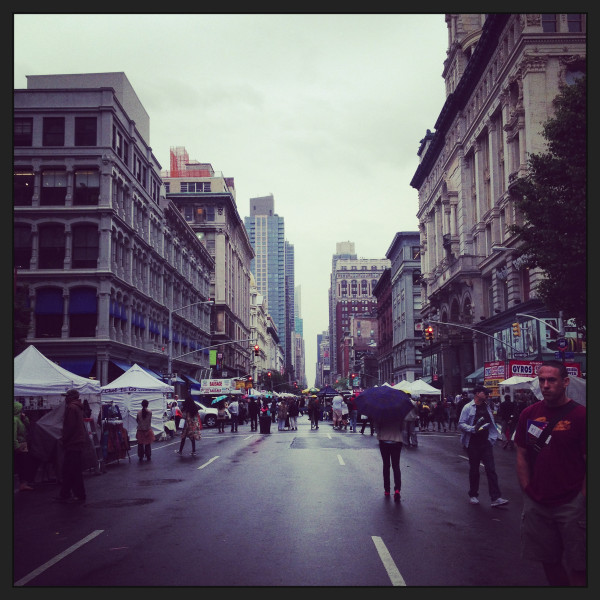 I’ve often dreamed of living in The City, but I don’t know that I would adjust well to the crowds. It’s nice to visit, but I need personal space, clean air, and green to feel right. Still, in the last few years, I’ve found my visits increasing in frequency, made all the more enjoyable by my increasing knowledge of what I can find. I rarely use a mode of transport other than my own two feet once I leave the train behind at Grand Central Terminal, and I usually don’t have any time constraints, affording me the opportunity to play explorer and map it out the old-fashioned way–by discovering with my own eyes, ears, and nose what gems await me. Sure, there are neighborhoods that are less fortuitous finds, but there are treasure troves, too, just waiting to be found. Point your feet in any direction and see where they take you! 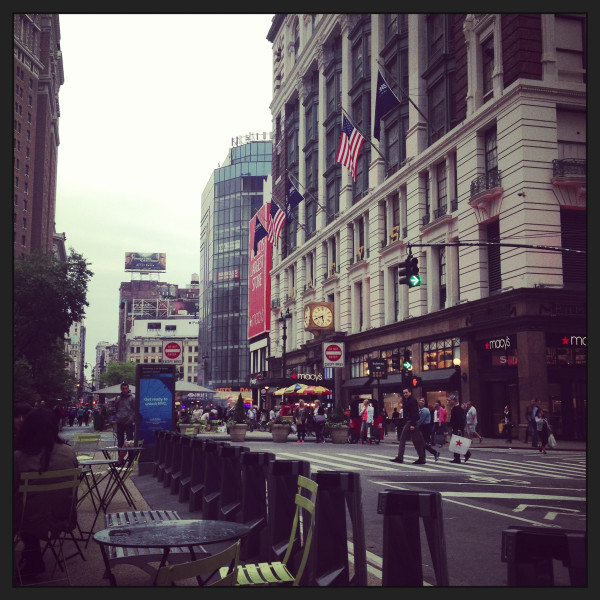 On Saturday, my husband and I went into The City to celebrate our 12th wedding anniversary (which is really on May 19th). Our plans almost were abandoned due to a train derailment on Friday night between Fairfield and Bridgeport. Service into NYC was suspended beyond South Norwalk and we had no idea what kind of mayhem awaited us with South Norwalk becoming the end of the line–so many towns and cities removed from the path, so much slack to be picked up. We checked the forecast, saw there was a 10% chance of rain, and decided to go ahead with our plans anyway. It would require driving 6 exits further down I95, but that was a small price to pay, considering what those on Friday went through. 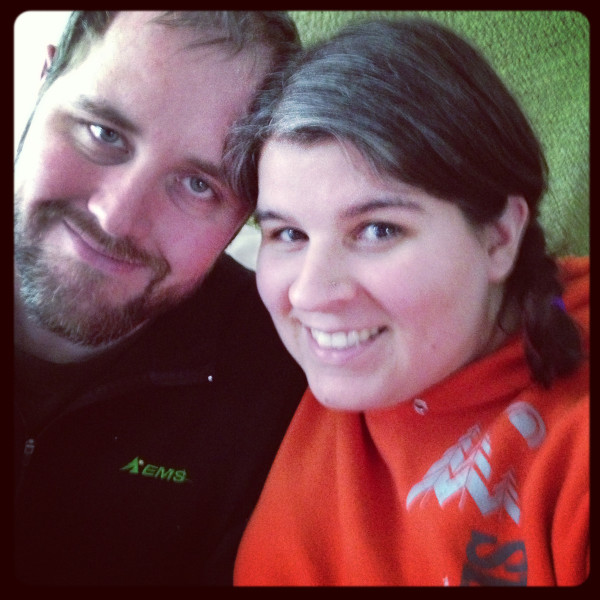 You may not know that right now I am auditioning for a blog ambassadorship for Stonyfield Farms. Part of the audition involves participating in their daily #WakeUpWithStonyfield posts, sharing photos meeting their theme of the day. Saturday’s theme? Being spontaneous. The spirit of spontaneity ultimately guided our day, with excellent results. 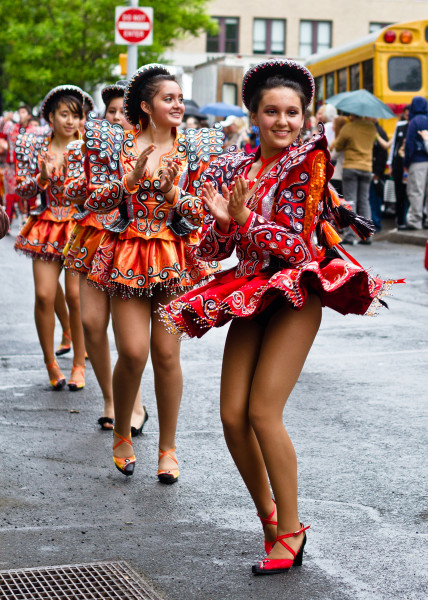 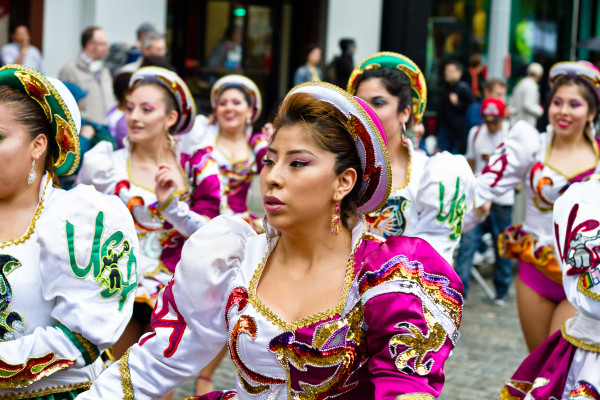 We hit the subway first and got off at Union Square, as I wanted to share the greenmarket with my husband. We stepped out of the station and into drizzle–not what we expected at all. I also had no idea which part of Union Square we came out into. As we walked along, we happened upon a parade–the 7th Annual Dance Parade, as we learned later. The costumes were mesmerizing and we were treated to dance styles I had never even dreamed of before! We stopped so I could take some photos, but then we spotted the greenmarket and moved on. 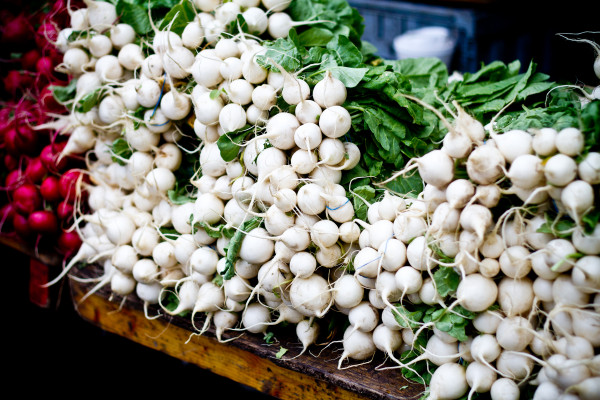 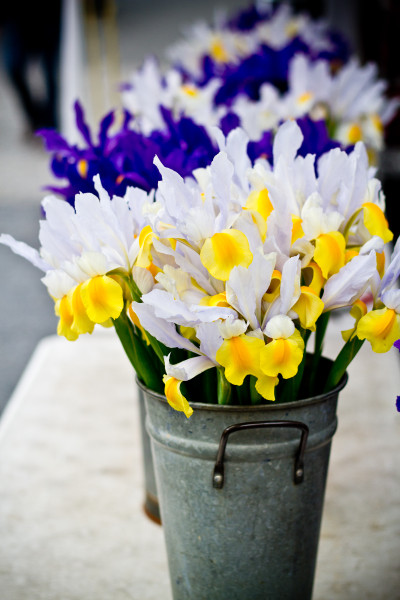 The greenmarket in Union Square amazes me. Such a plethora of fresh food at extremely reasonable prices. Seriously. I can’t get the same produce at our farmers’ market for such a bargain! City residents should rejoice–out here where the food is grown, it costs us more. So much variety, so much to see. I love just walking through it, watching what other people are sampling and buying, taking it all in. But then the rain began to fall a little harder. 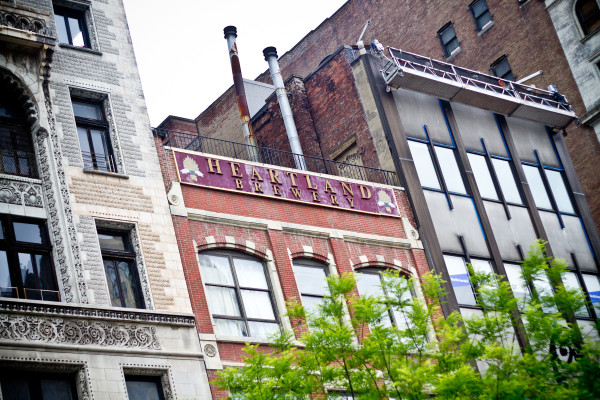 I spied across the street Heartland Brewery, so we ducked in there to get in out of the wet for a bit. I’m a sucker for breweries, and this one did not disappoint. We were seated in the upper level at a fantastic vantage point to check out the action below. We shared a voyage of beer, which included 5-ounce samples of 6 of their brews: Indian River Light Ale, Cornhusker Lager, Harvest Wheat Beer, Red Rooster Ale, Indiana Pale Ale, and Farmer Jon’s Oatmeal Stout. I paired my beer with fried pickles, a treat I haven’t enjoyed since my sister-in-law graduated from York College over a decade ago. The service was fast–the food was out in less than 15 minutes, and piping hot!–and attentive. We were impressed! I liked the Red Rooster Ale the best, though the chocolate notes in the Oatmeal Stout were definitely appreciated. 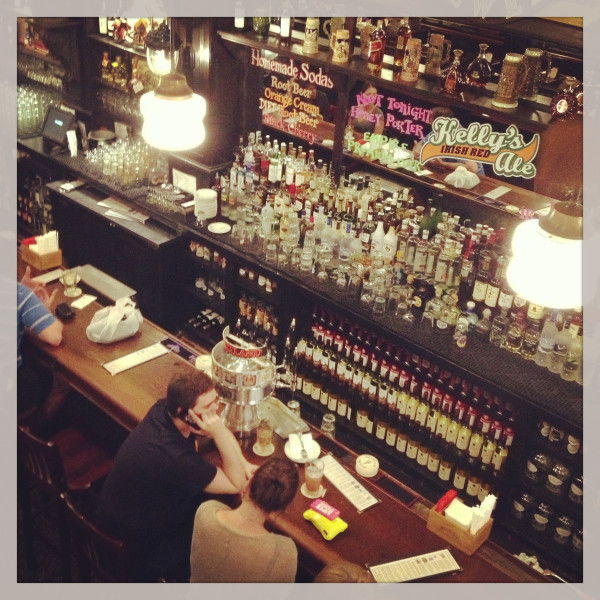 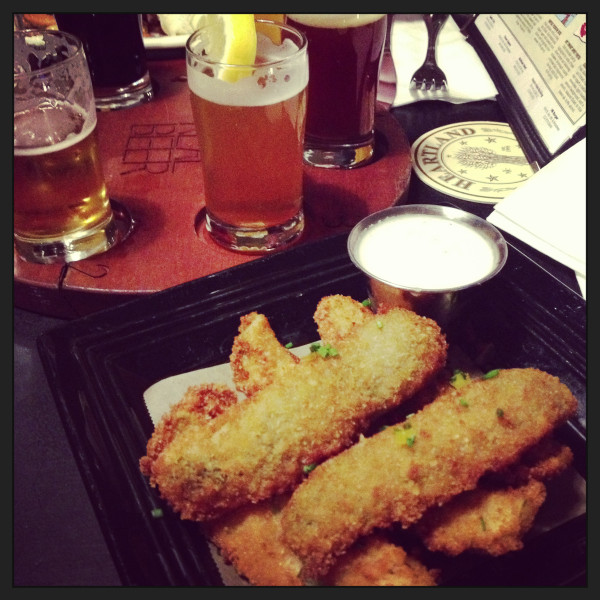 It was my intention to show my husband Pommes Frites in the East Village, a place I happened upon a few years ago when I attended some FringeNYC performances, but I got disoriented and discovered we were heading in the wrong direction. Instead of turning around, however, we found a street fair and decided to check that out. Go with the flow, after all. There wasn’t much to see–many of the booths repeated themselves–but it went on for many blocks, which I found fascinating. Walking down the middle of the street is a small joy rarely indulged in, but I love the change of vantage point. 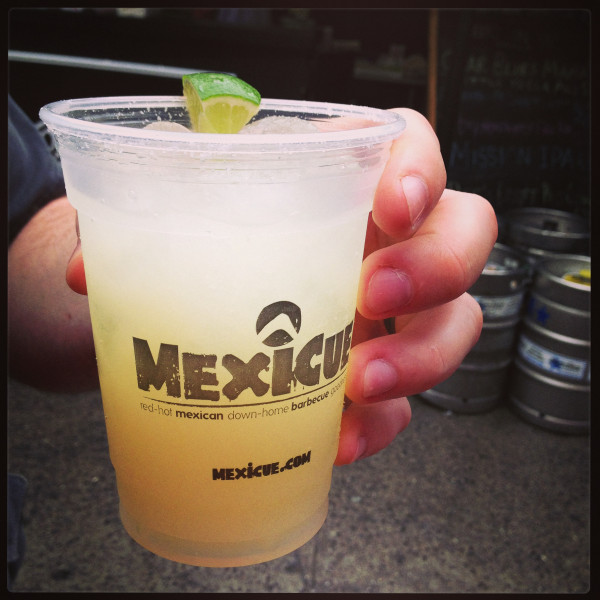 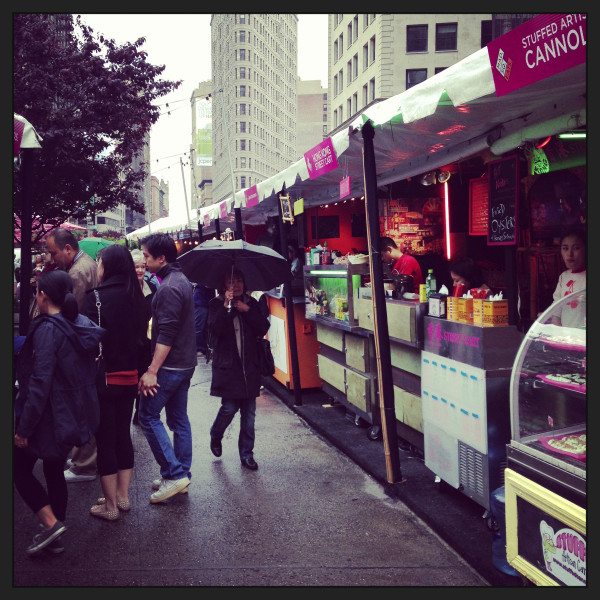 Eventually, we turned off from the street fair and decided to try to get ourselves into a recognizable area. That’s the great thing about midtown–the grid makes it easy to get back on track. That’s not what happened this time, but we did have another fun discovery–Mad. Sq. Eats. Mad. Sq. Eats is a month-long food truck celebration, providing a pop-up of foodie pleasures contained in Worth Square. We hit it at the wrong time–we were both still full–but we did grab a margarita from Mexicue and a box of assorted chocolates from Nunu Chocolates (I’ll admit–I was sucked in by the idea of absynthe and mezcal-chili ganaches–I haven’t opened them yet, for I fear I will eat all 12 in one sitting!). I will return when I go back to NYC on Wednesday!!

We headed North from there only to make it about a block away before we got stuck in a congregation of people. Those who visit Northern New England know about moose jams–places on the road where cars come to a halt to check out moose as they wander out of their natural habitat. In NYC, you get movie jams. I had seen one before, but there weren’t any big names and I didn’t hang around to watch it. This time, following the spirit of the day, we halted, wondering what the fuss was about. Across the street we could see old Checker cabs and cars from before I was born lining the street. A giant scrim was set up in the northwest corner of Madison Square Park, facing them. Extras in costume queued up next to 24-Hour Fitness, standing out like a sore thumb. 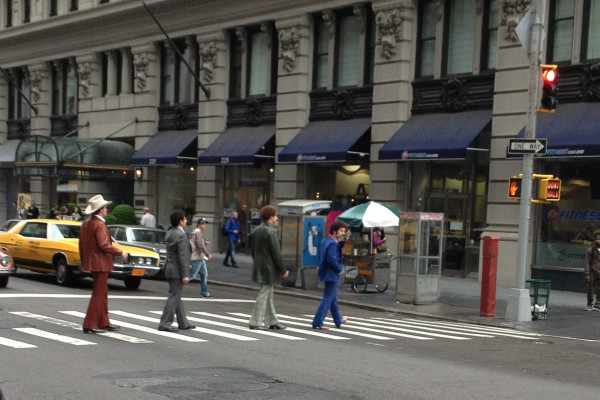 It was difficult to make out who was there across the street, but I heard murmurs of Steve Carell and my husband heard Paul Rudd. Then Will Ferrell crossed–I could tell, it was him!!–and I really got excited. This wasn’t just a random TV show or commercial–this was the real deal. A movie filming! It didn’t last long. In fact, I think they were only getting promotional shots at that point, as the stars posed in the crosswalk Beatles-style and disbanded shortly thereafter. Equipment breakdown began immediately. We tried crossing over to see what was happening–to catch a glimpse–but we were told to move along. 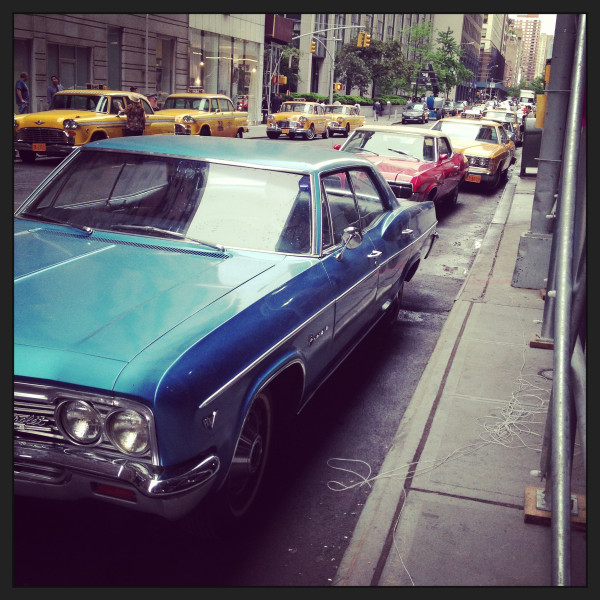 We did move along, following East 26th Street on the border of the park, but we didn’t see anything else. We rounded the corner, intending to circle back to Madison Avenue. Instead, we found all the classic cars, waiting to be trailered or driven away. Cougar, Beetle, Camaro, Coronet, and more. Hot pink papers fluttered in the breeze all along the street, proclaiming no parking for a production called Teaching Manheim. A quick google search on the iPhone returned the missing piece of data confirming our sighting–Teaching Manheim is also known as Anchorman 2, set to be released in December 2013. How exciting! 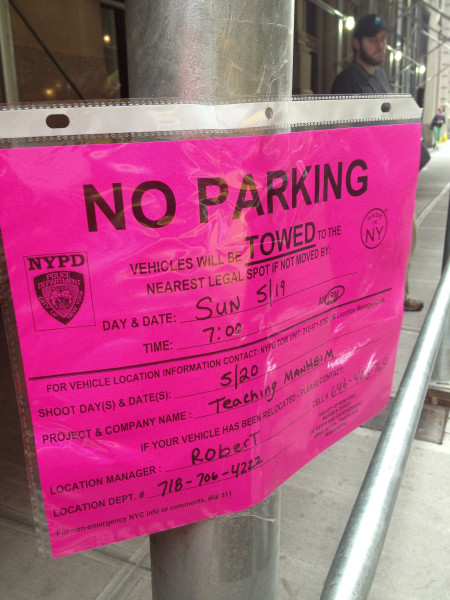 From there, I had no idea what else to do. We walked into Times Square, but part of it is blocked off right now for road construction and the feeling of being herded like cattle was never more present than that night. We ambled over to the ticket booth for last minute deals, wondering what we could find, but decided not to shell out the cash. Now what? We wanted to go to dinner at some point, but it was only 6:30 and the restaurants would be full of theater-goers eager to grab a bite before showtime. 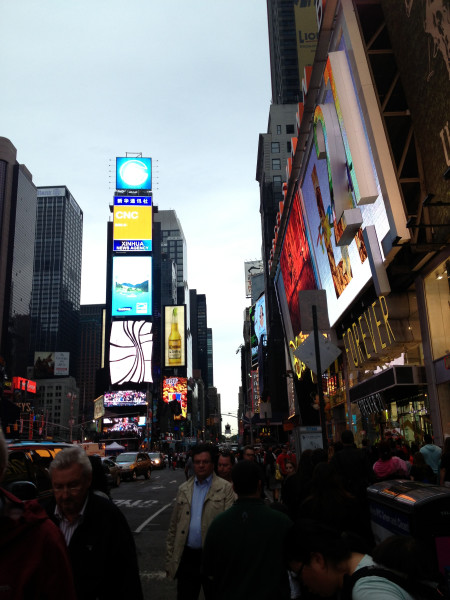 Funny thing about social media. Some people say it’s too much, that we’ve become over-sharers of our lives, inundating others with the most minute of plans. But the intention of apps like FourSquare was to help us connect with our friends, aiding us in discovering if they were nearby or giving them the opportunity to share insights with us if they saw we were somewhere they’d been before. I don’t always check in on FourSquare, but I had been all day. Serendipity was the word of the day, and it delivered us into fortunate circumstances once again. A friend we had made on a ski forum happened to be in the area chaperoning a school field trip. They were going to see Disney’s Newsies at 8PM and had extra tickets. Did we want them?

And that’s how we ended up seeing a Broadway show on our anniversary trip without even planning on doing it. 🙂 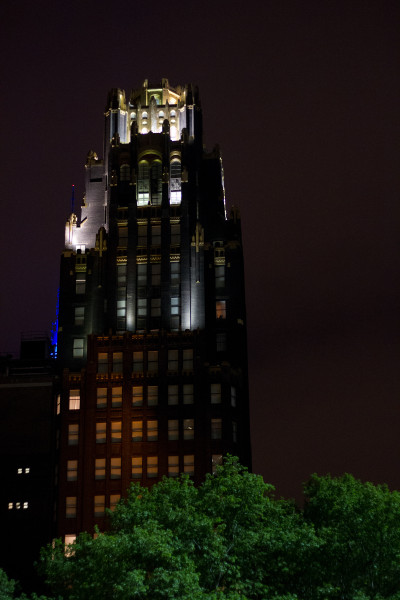 The day had gone so well that I decided not to push our luck. After the show ended, we walked back to Grand Central Terminal. It had been a full day and had gone so much better than the last time we went to NYC together. Why spoil it? 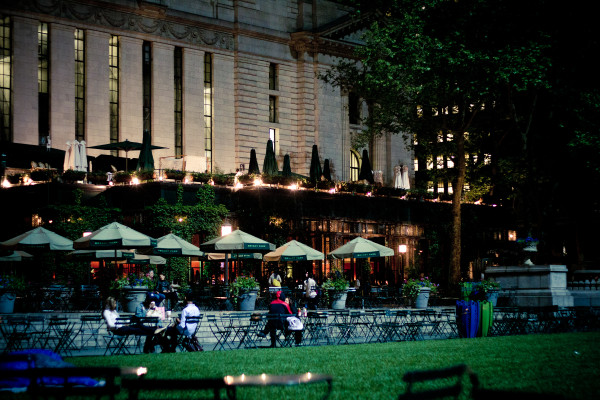 Wednesday I will be back! I was lucky enough to be selected by Cookbook Create to join them on tours of the test kitchens at Bon Appetit magazine, Food52, and The Daily Meal. I’ll be tweeting and Instagramming throughout the tours, so watch for it. You can also follow #FoodTourIWNY on Twitter. In the meantime, we’re enjoying a much quieter day for our real anniversary. A dozen years later, and I love him even more!