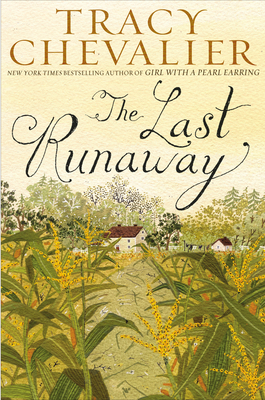 Honor Bright will never return to England: this much she knows. Between the shame of her fiance choosing another, the debilitating seasickness she suffered while crossing the Atlantic, and traveling 1/3 of the way across the continent to Ohio, following her sister to her soon-to-be husband’s home–only to lose her sister to yellow fever–it is unlikely Honor will ever be able to go back to her old, safe life. But America is a mystery to her and she’s not so sure she can remain true to what she feels is right in such a hypocritical, rugged frontier.

She knows she will have to marry–she can’t stay with her sister’s betrothed forever–and Jack Haymaker is about as good as it gets for suitors on the edge of civilization. She should consider herself lucky to make such a match. What she doesn’t count on is a secret past in the Haymaker family, preventing them–and her–from doing the right thing. And she’s not so sure she can live with that.

In The Last Runaway, Tracy Chevalier takes us to Faithwell, Ohio during the time of the Underground Railroad. It is 1850 and the Quaker ideals of an inner light in all–of equality–are being tested by new laws requiring all citizens to assist in the capture of runaway slaves, or risk losing their homes, their livelihoods, their little footholds in a new world just being carved out of the landscape. Who will have the guts to do the right thing, despite the huge risks?

I had a hard time getting into this book initially. It was slow moving and I couldn’t care less about Honor Bright and her quilts. She seemed like a snobbish prude, far more judgmental than I imagined a Quaker woman would be. I softened to her with time, as she proved herself to be a woman of integrity, who couldn’t understand why more weren’t decrying the injustice occurring right before their eyes. She started to surprise me as she found her voice, and I was grateful for that. If you like historical novels, this would be a good fit for you. I’ve heard a lot about the Underground Railroad along the East Coast, but very little about the portion through Ohio that led to freedom in Canada. Chevalier helps us envision what people may have gone through in this time of turmoil, with her three strong women who do their small parts to change the world. Three unlikely links in the chain, brought together by a common cause.

Disclosure: The views and opinions expressed on this blog are mine alone, based upon my personal experience. While I received a complimentary copy of The Last Runaway from the BlogHer Book Club, which was used to write this review, as well as monetary compensation, there was no requirement for a positive review