I don’t watch many television shows with any regularity. It’s complicated by the fact that we do not have cable or satellite TV and while we tried an internal digital antenna, we had no luck picking up any stations. We have subscriptions to Netflix and HuluPlus (the latter being because the former takes forever to get shows). But what it comes down to is time: my day is so full that I rarely have a chance to sit down and just veg. 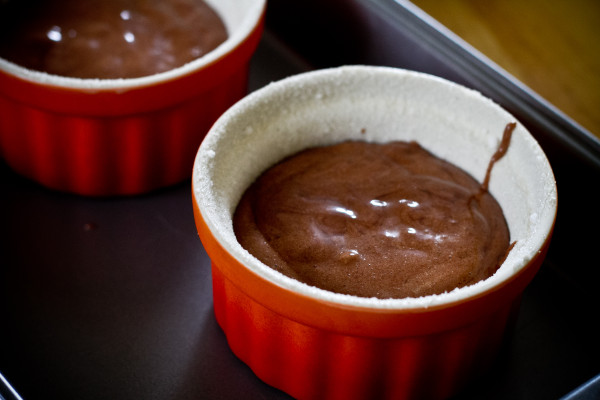 One show that has managed to snag me in the past, however, is Masterchef. Maybe it’s the fact that these are regular people competing in a culinary arena. Maybe I just like to listen to Gordon Ramsay yell at people. Regardless, when we had cable, I was drawn in. And after we moved and settled in (and I realized Masterchef was available on Hulu), I couldn’t get enough of it. The problem with watching television shows on the internet is that you devour the season way too fast, left hungry for more but knowing it will be many more hours (days, weeks, months) til you can get your fill again. Like The Walking Dead, which we managed to burn through less than a week after it was released on Netflix. And like a zombie with an inexpiable urge for human flesh that cannot be satiated, we’ve actually gone so far as to purchase an episode of the latest season from Amazon Prime.

I digress. Masterchef never ceases to amaze me. Your average Joe with a lot of know-how in the kitchen, scooped up by this talented trio of celebrity chefs and placed in the limelight where they will compete–and get yelled at and belittled and cry a lot–for a title that really doesn’t mean anything except to them, but they’ll also get a book deal for a cookbook. Whether I was rooting for Monti or Christine or willing someone to punch that arrogant bastard Ryan in the face, it was addictive. Did somebody remove my brain? This is not the me I used to be. 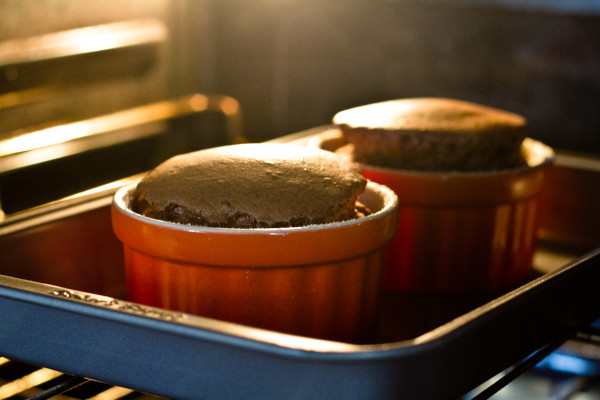 In episode 18 of season 3 of Masterchef, down to the reamining 4 contestants, the elimination challenge included baking not 1, not 2, but 3 different kinds of soufflés. In 60 minutes. 3. Cheese, chocolate, and raspberry. Yikes! I watched with great interest, knowing soufflé was already on the general list of ideas Kate and I made for First on the First challenges for this year. And then I couldn’t wait to make one.

Yes, they are notoriously finicky. It’s all about getting the right volume in the egg whites. And maybe holding your breath for the 15 minutes you’re baking, too. Add to that the fact that the soufflé will undoubtedly deflate before you can snap a good picture of it and you know you’ll be working your tush off just to get this right. But I wanted to do it. No, I couldn’t rattle off the right ratio off the top of my head like David and Josh on Masterchef did, but I had to bake a soufflé. There was no other choice. And so, soufflé it was for November 1st. 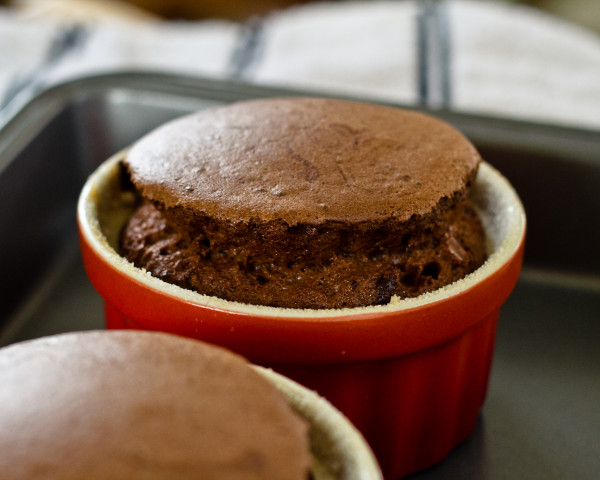 When making a soufflé, you need room temperature eggs, but you also need to separate the whites from the yolks, which is best done when they’re cold. I always stress about finding the right consistency for the whipped whites, having not done so often enough to have that down pat yet. Are these soft peaks or stiff? Is it shiny? Over-whipped? I still don’t know for sure. But it seemed okay, so I went with it. Even if I worried even more when it came time to fold some of those whites into the thick chocolate “pastry cream” –they seemed as if they would never combine properly.

I begged the kids to remain in the basement while the soufflés baked, insisting that there be no unnecessary vibrations across the floor. You can’t be too safe. Then I stood at the oven door, camera poised, ready to shoot straight into the oven. These wouldn’t be beautifully plated shots; I just wanted proof that my soufflés rose. 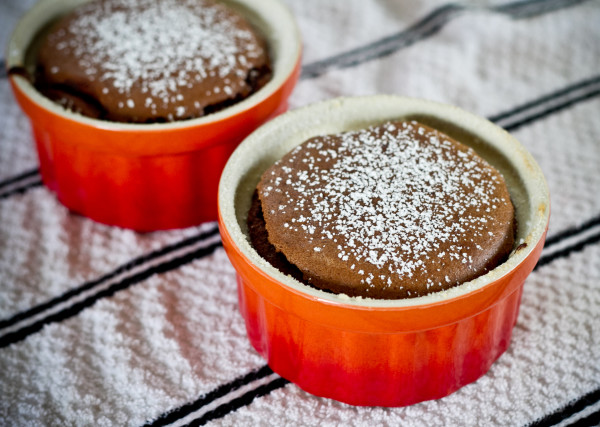 They did indeed rise, though not as high as some I’ve seen. It’s possible my ramekins were bigger than called for, too. I walked them carefully no more than 3 feet to rest them on my kitchen cart and they had already fallen, sad reminders of the glory that deflated before it could be fully enjoyed.

Before this challenge, I had never eaten a soufflé before. And while I was eager to make one, I’m still iffy on the taste of eggs (hence my choice of a chocolate soufflé). One bite and I was convinced–this may be the most heavenly thing I have ever eaten. Like warm chocolate mousse, only better. The kids are lucky I shared any with them. 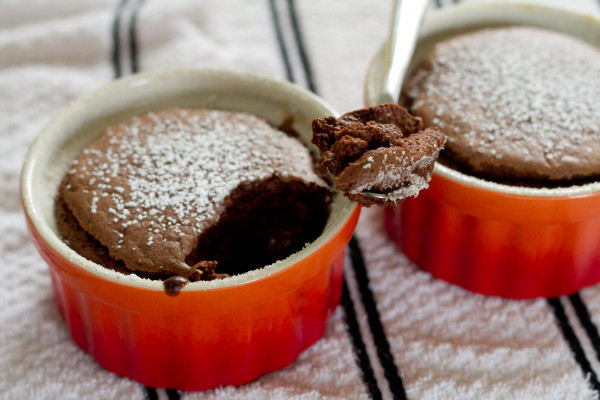 I am no closer to being a Masterchef today than I was yesterday, but I feel like the master of my domain now. Totally worth the anxiety!

We’re getting close to the end of 2012–can you believe it?! With the holidays in mind, Kate and I decided that rugelach might be a fun thing to play around with for the next First on the First. Posts will go up on December 1, 2012, so you have lots of time to plan it out and make it. If you’ve never participated and you’d like to join us, click on the tab above for more information!

Let’s see how the others fared with their soufflés this month!