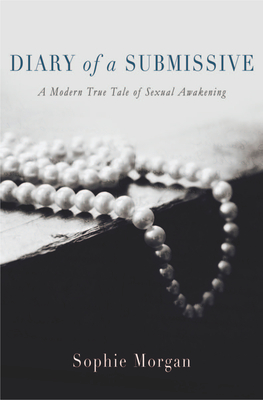 When the email arrived seeking volunteers to read and review Sophie Morgan’s Diary of a Submissive: A Modern True Tale of Sexual Awakening, I did not hesitate to respond. I jumped right in with both feet, confident that it would be cool to delve into something a little different, a little more risque, and ride the wave that Fifty Shades of Grey created to see where it took me. I was not afraid.

Huddled in the abandoned-office-turned-break-room on my lunch hour, trying as hard as I could to hide the cover of my reading material, I started to have misgivings about what I got myself into. Surely I blushed more than Sophie at her worst could at the thought of being discovered reading this book at work, albeit not on work hours. It seemed so… naughty. So wrong. Yet so engaging.

The truth is that Sophie Morgan’s memoir is quite racy–explicit, if you will. Read it out loud and you’ll likely turn crimson from head to toe or fall into a fit of giggles. It can be a toss-up, at times.  It most definitely comes on the heels of the success of Christian Grey and what’s-her-face, though I have yet to figure out why Fifty Shades of Grey is such a “success.” (I read the first book, but I’m still asking myself why I pushed through that atrocity… and the Twilight  series. I guess I’m a glutton for punishment, too, Sophie.) The difference is that Sophie Morgan can actually turn a phrase and write something interesting, something more than “mommy porn” (god, I hate that phrase). She is far from the vanilla D/s experience portrayed in Grey, and that’s okay.

What really got me, in all that spanking and slapping and bondage and “play,” is that underneath it all, Sophie is a very normal person. She has an intellectual job that her sexual life does not interfere with. Well, mostly not. She has a family who cares about her, though she finds she needs her distance from them. She struggles to pay the rent and put food on her table on a salary that just isn’t enough. Her friends come by to cheer her up with a binge on movies and wine. And when she’s suddenly dumped (if you can call someone disappearing from your life in an instant, as if he never existed), she turns to baking to work her way through the pain–I certainly know how cathartic baking is! Sophie could be you or me; you just never know.

Sure, there is this erotic side that is difficult to reconcile, hard to understand why a grown woman would so completely submit herself to the will of someone who would inflict pain on her–and desire that pain all the while. We’re not talking a playful smack on the tush in the heat of the moment, but 100 cracks of a wooden spoon, for example, received while seated and shackled in a prescribed punishment position. Each accounted for with a number and a “thank you,” despite the excruciating pain. Whether it’s pride or stubbornness, love or she’s just a people-pleaser, I have a hard time reconciling this side of her life with the smart woman the rest of the world sees. And I’m pretty sure that’s the point of Diary of a Submissive. The whole thing is rather inexplicable, though she makes a good effort at trying to make it more clear.

So no, Diary of a Submissive probably isn’t the optimal read while waiting for a parent-teacher conference at school. And yes, it can be thrilling… exciting… arousing… to read–especially since the writing is far from sloppy, even if some scenes are. (Ha!) There certainly are some similarities that are hard to ignore between Grey and Submissive (and Twilight, for that matter). Like the cover art. And Sophie’s first dinner out with James, where she notes everyone is in awe of him. Slight similarities aside, it stands far and above Grey and is much more of a pleasure to read. Probably because I’m not bashing my head trying to figure out how the heroine could possibly be so stupid when she’s supposed to be a college-educated woman, and an English major, to boot! Sophie is a smart woman, and it shows. The only pain here is from the crack of a belt on the bottom. Or some nipple clamps. It’s all good.

Interested in finding out more? Join in the discussion on BlogHer! And get the book, while you’re at it!

Disclosure: The views and opinions expressed on this blog are mine alone, based upon my personal experience. While I received a complimentary copy of Diary of a Submissive from the BlogHer Book Club, which was used to write this review, as well as monetary compensation, there was no requirement for a positive review.