Working our way through the list, there were only dacquoise and sourdough left for my goals this year. Kate and I decided to go with dacquoise this time, even though it wasn’t initially on her list of culinary challenges.

First On The First seemed to be plagued this month, however. I planned ahead, selecting a Halloween party late in the month as the perfect opportunity to serve up the dacquoise. I salivated over the options, choosing an Almond Joy Dacquoise recipe from Today’s Nest. I was ready. 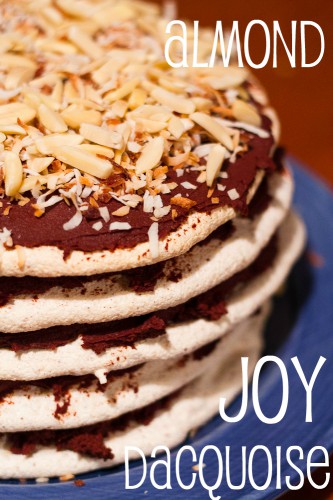 The weather, however, decided to throw a wrench into the works.

A freak October snow storm struck on Saturday, the same day as the party–and, consequently, dacquoise preparation. I ran out of daylight before it was done, and knew there’d be no chance to capture it the following day after its decimation at the party. So I snapped a few quick shots in the lousy lighting (sorry!) and wrapped my prize up for the party, excited to show it off.

We almost didn’t make it to the party. The roads were bad–far worse than I thought they would be. And my Blazer only has rear-wheel drive right now. We were sideways going up some of the roads, but we couldn’t turn back–there was no chance we’d get back up our hill. We had to reach our destination. We knew we’d be spending the night–we just had to get there.

Finally at the right street, just one house away, we met a hill we couldn’t get up. The Big Guy gunned it, but there was no progress. A neighbor came out and, using his snowblower, tried to make a path for us. With a lot of gas, we finally got to the party house…

…only to have a smoke screen emit from the engine bay. The radiator blew.

The Big Guy didn’t want to dampen any spirits. He rushed us out of the car and into the house, insisting we have a good time. Luckily, my sister lives just down the road, so he and a friend transported the Blazer to her house, planning on getting a new radiator the next day so we’d be back on the road. 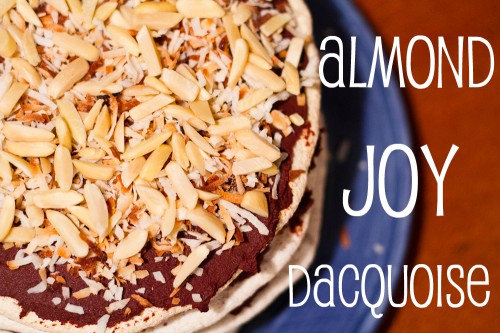 Except the snow had other plans. 6 inches of anticipated snow turned into 10, then 15, and finally 20 inches. 20 inches of snow in late October in Connecticut. This is unheard of!

The snow we could handle. The power outage, we couldn’t. At just about the exact stroke of midnight, out went the lights. And they stayed out.

We had high hopes that our house would have fared better, but after a treacherous ride home the next day from a friend, we found no power there either. In fact, 97% of my town was without power, and most of the surrounding communities were 100% without power. No power=no heat. And no chance to get a new radiator either.

We trekked on to my parents’ house, where I still am. Power finally was restored to their house this afternoon, 66 hours after it was lost. My house, however, is still in the dark. With a fridge full of groceries that are now garbage. Boo.

It could have been worse. My parents have a fireplace, which supplied minimal heat Sunday night. By Monday night, we had some old kerosene heaters going. It was almost balmy with those. We cooked on the grill and entertained ourselves the old fashioned way–without TV or internet. And when the cell service went out, we were even more out of touch with the world. But it wasn’t all bad.

Sure, my family is assembled on the multi-generational couch tonight, enjoying Glee and the glow of electric light bulbs. But there was some value in the time we spent together “roughing” it. This will certainly be an event to remember! 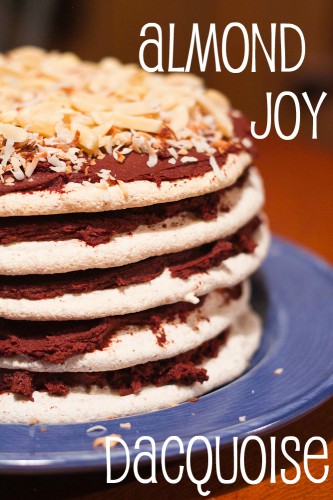 I want to congratulate Kate at Food Babbles. Not only did she join me for yet another edition of First On The First, baking her own dacquoise (which is gorgeous!), but she gave birth to a baby girl this morning. May her home be full of blessings and a lifetime of joy lie ahead of them!