10 years ago today, I remember getting ready for work. I lived about a mile from my job as a municipal secretary then and we didn’t start the day until 9AM, so I could sleep in a bit just about every day. I was young, newly-married, and seeing a world full of infinite possibilities.

I remember having the news on, though not really watching it. It was background noise while I ate breakfast and gathered my thoughts, preparing myself for the day ahead.

I remember seeing the breaking news report of the first plane hitting the North Tower of the World Trade Center. At the time, there was speculation of a malfunction of some sort. Nobody could imagine–or didn’t want to imagine–that such an event could be intentional.

I remember leaving for work in a hurry, rushing into the office to tell them what I had seen. Many dismissed it, acknowledging that it was, indeed, a horrible tragedy, but sure that it had to be an accident. How could it be otherwise?

I remember hearing the report on our crappy office radio, always tuned to the local FM station, about the South Tower being hit. And then reality hitting home.

I remember tracking down an old, tiny, black-and-white television from an office on another floor, and our office trying to watch its fuzzy antennae’d reception the rest of that morning.

I remember the same video footage being shown over and over again, etching itself into my brain forever.

I remember further reports coming in about another plane hitting the Pentagon. And then the fourth plane; the one that went down in that field in Pennsylvania–a jet full of heroes.

I remember how our world was changed eternally in one seemingly-benign Tuesday morning.

Thank you to all who have given their lives on that day and since, due to what the events that unfolded on that fateful September 11th set into motion. You will not be forgotten. 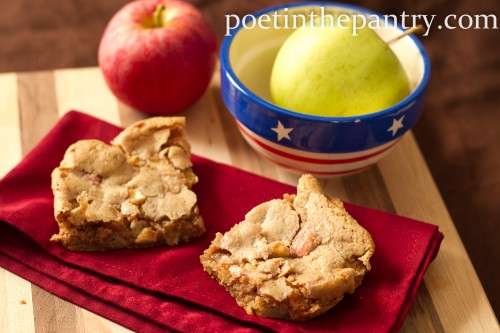 Apple Pie Bars
Print
Prep time
15 mins
Cook time
35 mins
Total time
50 mins
Apple pie in the form of a bar cookie
Author: adapted from The Velvet Bird
Recipe type: Dessert
Serves: 12
Ingredients
Instructions
Notes
*Next time, I may reduce the vanilla sugar to ¾ cup. These are quite sweet and I don't think a reduction of ¼ cup of sugar would affect them too greatly. *It may seem repetitive to grease the baking dish and line with parchment paper. You don't need to use the parchment paper, but it does make it easier to remove the bars when cooled, especially for cutting. Greasing the baking dish helps keep the parchment paper in place when you're spreading the dough in the pan. *I did underbake on my first shot, taking the bars out after 30 minutes. Once they had cooled for an hour, I realized my error. I popped them back into a re-preheated oven for about 8 minutes, then left them sitting in the now-off oven with the door wedged open (using the handle of a wooden spoon) for about 10 minutes, since I was interrupted mid-process. It did help firm them up, but I highly recommend getting it right the first time around, if you can.
Wordpress Recipe Plugin by EasyRecipe
2.1.7