I’m sure you’ve heard or seen of them before: plastic bags for your produce that are meant to prolong their freshness. And while this is a good idea in theory–especially for someone like me who goes a little crazy at the grocery store and then forgets about half the produce until it’s discovered later, wilted and withered, well past its prime–do they hold up to the hype? Clearly Fresh Bags wanted me to try them out and see for myself.

I’ll admit, I wasn’t too eager at first. While I liked the idea of less wasted food, I felt that the bags were a bit of an inconvenience. Sure enough, once I put the bananas in the bag, nobody ate them. It was like there was a mysterious force field that prevented my veggie- and fruit-feasting foragers from partaking of the bounty they usually devour in record time. Still, I continued on. 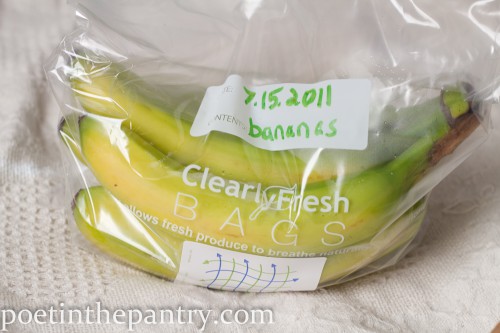 Day 2 for the bananas, which were about half green when they entered the bag

On July 15, 2011, I put a bunch of bananas and a 2-lb package of Campari tomatoes into separate Clearly Fresh Bags. As directed, I pushed out some of the air and sealed the bags. I marked the date and put the fruits where I normally keep them–in this case, on the counter in my pantry. I watched and I waited.

According to Clearly Fresh Bags, the secret is the BreatheWay membrane. This works as a regulator, allowing the perfect amount of oxygen in and carbon dioxide out. This membrane is what sets Clearly Fresh Bags apart from other companies–and you may have seen it before. Eat Smart‘s fresh cut vegetables that you find in the produce section of the grocery store sport this technology.

The end result for me, however, was less than favorable. It may have been that the technology wasn’t well-suited to tomatoes on the vine, but within a matter of days, the vines started to grow fuzzy and rot. Too much moisture for them, I assume. The tomatoes were mostly unscathed and I did pick them off the vines and return them to the bag, but it seemed like a step that should have been unnecessary. I normally keep them in the same container in which I’ve purchased them and store them for about a week at room temperature without incident. 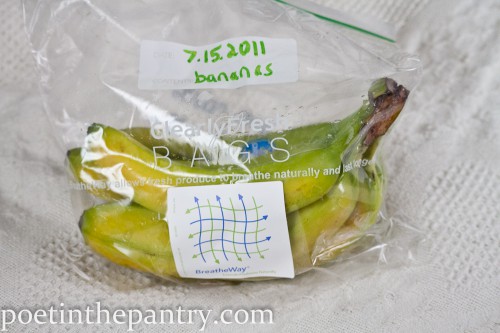 Day 5 for the bananas: as you can see, there's a lot of condensation in the bag

The bananas were also a disappointment. They were about half green when I put them into the bag, and they stayed that way. Within 5 days, however, the bananas on the bottom rotted. As in: the peel split open, the banana squished out, and a wet, gooey mess formed. You could see not only an abundance of condensation in the bag, but all the trapped moisture between the bananas and, of course, the liquid mess from the bananas that had squished. I had to toss them on July 20th, even though I normally can get a week out of my bananas, too. I can’t recall ever having bananas just fall apart on the counter like that in a matter of 5 days. 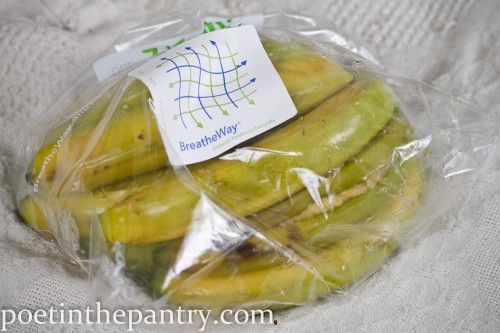 Day 5 bananas: see the split in the one that was on the bottom? It just fell apart without the usual yellowing-of-the-skin ripening

Granted, it is hot right now: today is supposed to be a high of 90 degrees. But that shouldn’t matter. If the whole point of the Clearly Fresh Bags is to extend the shelf-life of your produce, they should work regardless of the weather. Maybe they’re just better suited to use in the refrigerator?

It does state on Clearly Fresh Bags’ website that you can add a paper towel to the bag to help control the condensation, but I was reluctant to test further for fear of losing more produce. My grocery budget can only go so far and afford so much loss. These may be a sensational find for someone out there but for me, they’re just not a good fit. I’d rather take my chances with my usual storage methods. I’m sorry, Clearly Fresh Bags, but I will have to pass.

Disclosure: The views and opinions expressed on this blog are mine alone, based upon my personal experience. While I received a complimentary package of Clearly Fresh Bags which were used to write this post, I received no monetary compensation, nor a requirement, for my review.