Who doesn’t like chocolate? Alright, I actually know one person who doesn’t. My former boss at the local ski area where I worked. No matter how many times I tried to convince him otherwise, he simply was not a fan. Come to think of it, he doesn’t like tomatoes either. Or a bunch of other things. I don’t think his vote counts.

For the rest of us “normal” people, chocolate is a staple. Even if you generally don’t indulge in baked goods or ice cream, you’ve probably grabbed a chocolate bar at some point. Whether you’re a Hershey fan or have higher end preferences, chocolate is universal. Bittersweet, semi-sweet, milk, dark, white (which only counts if it has real cocoa butter in it)… there’s something for everyone, depending on your tastes.

Vosges Haut-Chocolat has been on my mind for a while. I first heard of them during the bacon baking craze last year as the source of Mo’s Bacon Bar, a chocolate bar with bits of bacon ensconced in milk or dark chocolate. Yes, you can drool now. I learned more recently that they are the purveyors of a larger variety of gourmet goods, including exotic truffles, toffee, and even organic chocolate. When I placed my Father’s Day order of porcine confection, I added to it an assortment of mini bars to sample myself. I needed to see first-hand what all the hype was about. 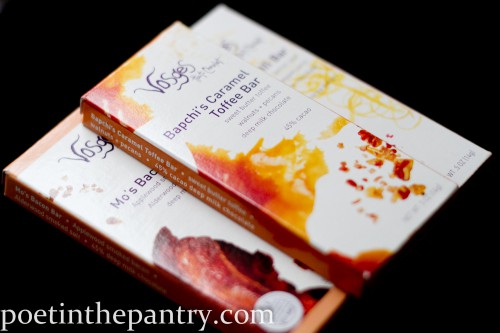 The first I tried was the Amalfi, which is described by Vosges Haut-Chocolat as “lemon zest, pink peppercorns, white chocolate” with “36% cocoa butter.” When I selected this one, the combination was the most intriguing to me. Peppercorns–in chocolate? Really? I had high hopes. Unfortunately, they were not fulfilled. While the first bite isn’t bad–the chocolate yields easily, melts on the tongue almost immediately, and the lemon accent is quite pleasant–the peppercorn bite kills the experience. I have had four other people try this bar for me and of them, only one enjoys it: my six-year-old daughter. Without the peppercorn, it would be fantastic. But the peppercorn just doesn’t do it for me.

The next one bar on my agenda was the Bapchi’s Caramel Toffee Bar. It is a combination of “sweet butter toffee, walnuts + pecans, deep milk chocolate” with “45% cacao.” The Bapchi is entirely delightful. Again, the chocolate begins melting as soon as it hits your tongue, smooth and sweet. Every bite was full of the toffee and nuts. The bits of toffee are sweet and buttery, adding a fantastic taste dimension. It was hard to distinguish the nuts as a specific separate flavor, but they blended well for overall flavor. This was my favorite.

The Big Guy was kind enough to share his Flying Chocolate Pig and Bacon Caramel Toffee with me. The Flying Chocolate Pig is a solid 1.2 oz of piggy perfection. Same as what’s found in the Mo’s Bacon Bars, only a higher concentration of flavor due it its increased girth. I found it to be quite pleasant, with the bacon bits crispy in the smooth chocolate surrounding it, though there is a noticeable bacon aftertaste that lingers. It’s not unpleasant, but you may want to stick with small doses. Which is fine with the mini bars since each is about the perfect amount of chocolate for a snack anyway.

The better of the two was the Bacon Caramel Toffee. Mmm… Bacon Caramel Toffee. Each square of toffee is enrobed in a 45% cacao milk chocolate exterior. The toffee, just as buttery and delicious as it is in the Bapchi candy bar, only better. Because the bacon played perfectly off of it, adding dimension and saltiness that balanced the sweet beautifully. I was only lucky enough to have one piece, but it left an ever-lasting impression. 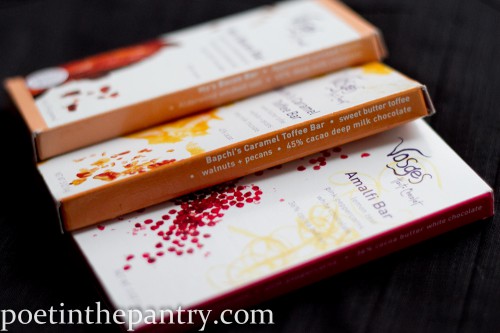 The verdict? If you don’t have an adventurous palate, stay away from peppercorn in your chocolate. Otherwise, you should be pretty happy with what Vosges Haut-Chocolat has to offer. I will be back. Next on my list? Caramel Marshmallows, of course. Oh, and maybe some of those milk chocolate truffles… Definitely more of the Bapchi candy bars! Delicious!