On Friday, April 22nd, the kids and I returned to New York City. Clearly, I am a glutton for punishment. Not only did I have my two in tow, who are nearly 6 and 4 years old, but a friend came along with her 9- and 4-year-olds. What were we thinking? Luckily, this was not planned to be a bakery tour like the last jaunt. The day was mostly dictated by the children, with a couple quick stops for me to feed my curiosity. 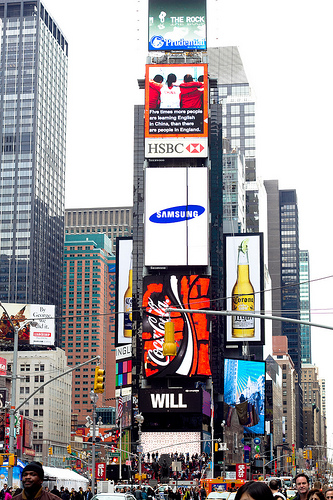 The ride into the City was far less than idyllic. Whether it was the fact that we were going in 2 hours earlier than I usually do, that we were taking the New Haven line instead of Southeast, or that it was Good Friday combined with April vacation, it was purely suffocating. We ended up standing for all 77 minutes of the ride, scrunched in one of the entry points to the car. We tried moving back to where purported empty seats could be found, but that proved to be more of a challenge than it was worth. So we stood. The whole way. With four kids. Not fun. The kids, however, felt it was a great adventure and had no problem throwing themselves about the train with abandon. It’s surprising we didn’t require a medic immediately upon arrival at Grand Central Terminal. 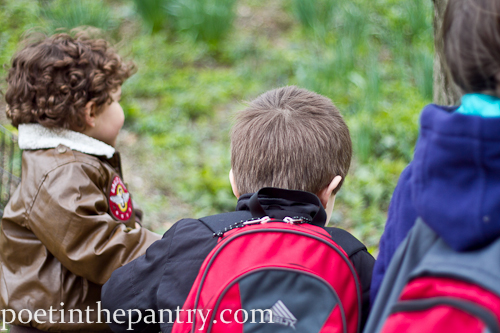 The first stop of the day was at Radio City Music Hall to partake in the Mamapedia deal for Madagascar Live. Or, fake Broadway for kids who won’t know any better. I love seeing shows, but this was not one of them. Which was fine. It served its purpose as an opportunity for the kids to be in a theater setting without the pressures of having to remain seated or quiet for a long length of time. If nothing else, I can now check Radio City Music Hall of my list, as I had never been inside it before. I will be back–for an adult show. 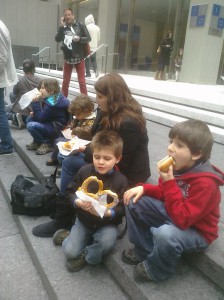 Bouncing off the walls–nearly literally–after the show, we decided to enjoy a bit of the street food culture to save our pocketbooks. Sitting on the steps of one of the many office buildings, we bit into our hot dogs, sausages with sauerkraut, and pretzels, savoring every salty bite and banishing my father’s admonishments of “dirty water wienies” in the process. Hot dogs may be an amalgamation of the unsavory piggy parts, but they’re pretty darn tasty, too. And well-suited to unfussy indulgence, especially when you’re dealing with short attention spans and a tendency toward sudden fleeing. 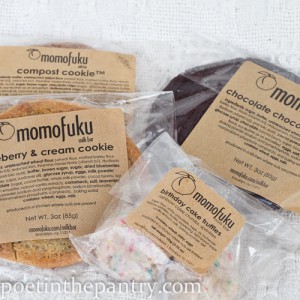 Bellies now content, I insisted we make a quick re-stocking stop at the inconspicuous Momofuku Milk Bar Midtown. I was so proud I could find it again, after all the trouble I had last time around. It felt almost like having the secret password to a speakeasy when I spotted it, and I showed it off with pride to my companions. I studied the menu while in line, reminding myself that the kids had little patience for experimentation. I selected some of the cookies from the open bins–compost, chocolate chocolate, peanut butter, and blueberries and cream (sadly, no cornflake cookies this time!)–and set the box on the counter, delighted to find the abundance of birthday cake truffles in the case. I swear, I could live off of those things alone. Despite the risk of ruination, I ordered 2 packages of the truffles, plus one of the chocolate malt cake truffles, for good measure. $24 for six cookies and nine truffles? Totally worth it. I deposited my stash in my son’s backpack, praying that they would arrive home intact. 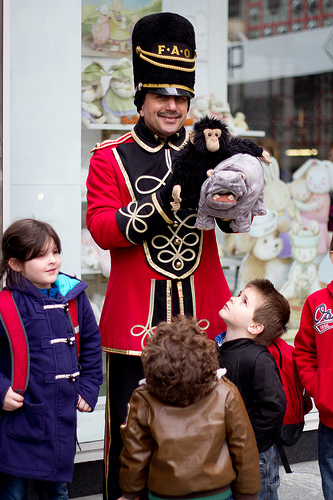 We found ourselves in a very crowded FAO Schwarz after that. I began to question my love for New York amongst the cattle herd, claustrophobia taking over, as well as a strong desire to get out of there ASAP. We stayed long enough for the kids to have their minute on the floor piano and to pick out a small toy each, then quickly fled to Central Park for some open space. How convenient that it’s practically right across the street. 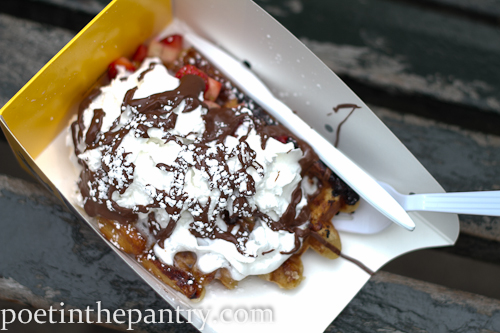 Much to my delight, we happened upon a Wafels & Dinges truck just outside the park. I’m a big fan of food trucks–you can read all my love about our local gem, Rocket Fine Street Food, all over this blog. But waffles? With toppings? Oh, yeah! We need one of these in my hometown! (And the guy in the truck surprised me with knowledge of the hometown hero, so maybe he’s ready to expand already?) I tried to rein myself in, but it was ever-so-difficult with all the toppings to pick from. In the end, I settled upon a liege with chopped strawberries, whipped cream, and Nutella drizzled over the top–with a light sprinkling of powdered sugar, just to add to the magic. There was a slight difficulty in eating this delicious concoction–I even cut through the cardboard tray at one point–but it was worth all the trouble. I could kill for warm waffles with all the trimmings at my beck-and-call. My wardrobe is thankful this isn’t an everyday option. 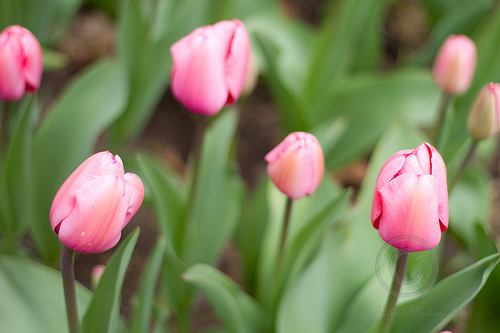 Spring has arrived in Central Park. Pink tulips were opening their buds in greeting, brazen and beautiful. Ahhh–at last. We checked out the cliffs near the entrance, spying one of the charming bridges. On our way to it, we found a cluster of people fussing over something in the bushes. A raccoon. Only in New York. The thing was probably rabid, seeing as it was only 3PM. We managed to get by it unscathed and continue on our short walk through the park. 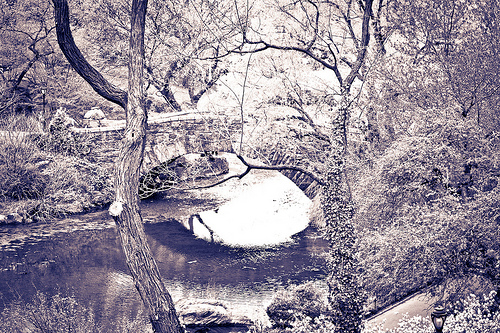 The kids wanted to ride the ferris wheel in the Toys R Us in Times Square. We were side-tracked by a twenty-five minute wait to use the restroom in one of the multitude of Starbuck’ses along the way but eventually, we did make it to Times Square. The kids only had eyes for a huge television on the side of one of the buildings. How sad. Then again, perhaps it’s not so great that all the advertising in the Square is such a draw anyway. What does that say about our culture? 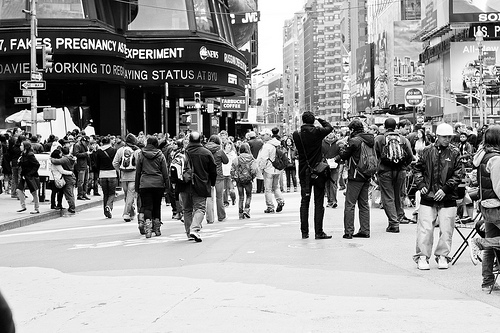 Inside Toys R Us, it was much like FAO Schwarz. We had to buy a ticket for the privilege of waiting in line 1 hour later. So we waited in line–again–for the restroom. Then tried to peruse the second floor, home of Jurassic Park and a huge animatronic Tyrannosaurus Rex, before returning to the ferris wheel and taking our place in another long line. By the way, have I told you how much I hate heights? I hate ferris wheels, too. But I love my kids, so I sucked it up and rode the damn thing with them, trying hard not to look at anything but them. It took all my strength not to adhere myself to the pole in the center and cling for dear life. I had to be brave. For their sake. 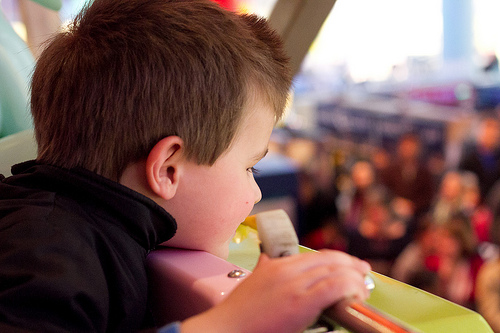 The kids were pretty tired at this point and my feet were getting sore. We decided to head back to Grand Central Terminal, via the backside of Bryant Park and a quick stop at Lily O’Brien’s Chocolate Cafe. While I took my time considering my options, the girl behind the counter handed out truffles to the wearied children. I decided upon a solid milk chocolate bunny for each of my kids, plus 24 of the gourmet confections in the display case (12 of which were immediately set aside for my mother-in-law for her birthday). Days later, my brain is too fuzzy now to identify which is which, but all of the ones I’ve sampled have tasted wonderful. Real chocolate–not like those Whitman’s and Russell Stover imitations found everywhere–with quality ingredients, and fresh, fresh, fresh. Next time, I have to try one of their hot chocolate drinks, made with 100% Belgian chocolate. 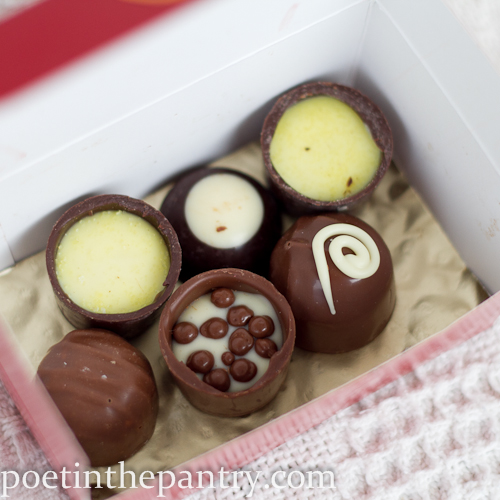 The ride home was uneventful, thankfully. It had been a long day and we were more than ready to climb into our beds and get some rest. I swore it would be a while before I returned to traipse the streets with my kids again, but we know I’ll forget in a week or two and start planning the next big trip. I still haven’t done that pizzeria tour, come to think of it. Hmmm…

New York, I love you! 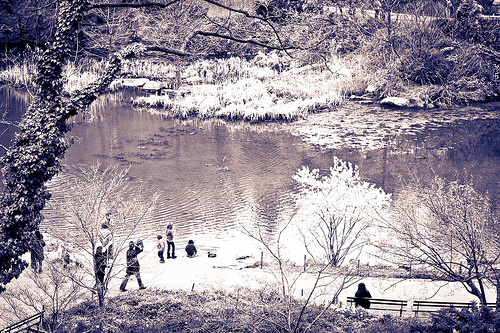